FIFA 21 Team of the Week 5 Predictions

Published on by Simpleblue 64 Comments 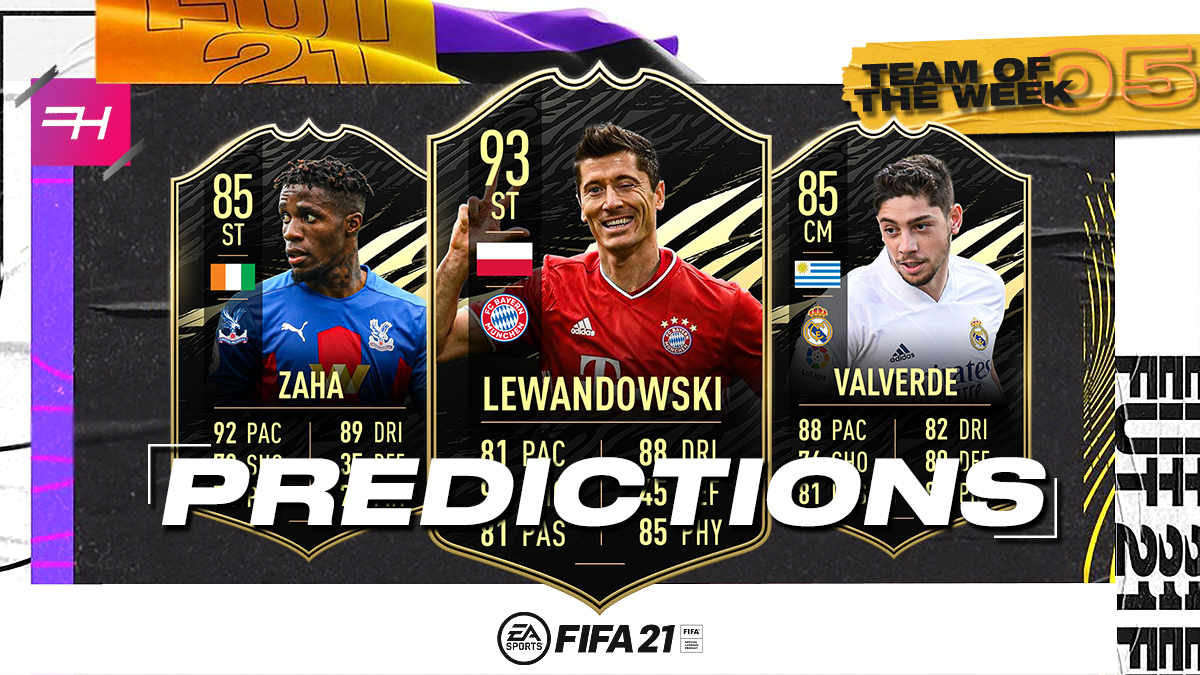 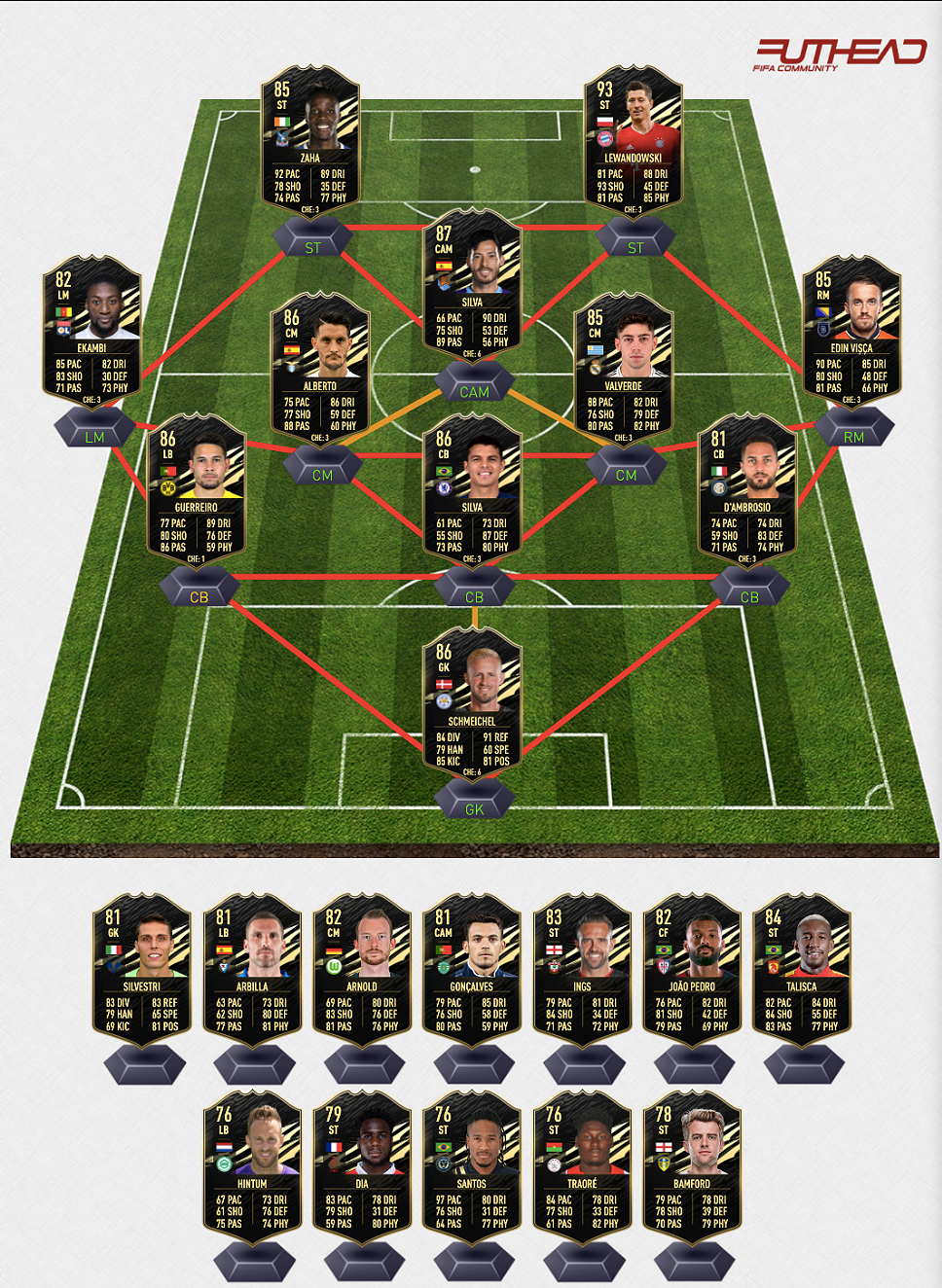 Kasper Schmeichel GK - Leicester City - 84 -> 86 Rated: One of the Top Matches this Weekend was between Arsenal and Leicester City who faced each other at the Emirates. For the first time in 47 years Leicester City managed to win at Arsenal due to a close-range header from Vardy but one who stopped Arsenal from scoring was the danish goalkeeper Kasper Schmeichel who made a total of 4 saves and was a commanding presence in the Box.

Raphael Guerreiro LB - Borussia Dortmund - 84 -> 86 Rated: Borussia Dortmund faced Schalke 04 in the Revierderby on Saturday, the biggest Derby in Germany and the pressure have been on both with Dortmund having a poor Performance in the UCL and Schalke not being able to win a Game for a long time. It took until the second half and a genius corner for Dortmund to score the opener, assisted by Raphael Guerreiro who's shot just got saved from Rönnow. Impressive 151 ball contacts and two assists from Guerreiro in the Derby got awarded with a 2 and MOTM from Kicker.

Thiago Silva CB - FC Chelsea - 85 -> 86 Rated: Another top match in the Premier League was between ManU and Chelsea which ended in a better 0-0 draw. In a game of few real standout performances, it was Thiago Silva's experience and authority at the heart of Chelsea's defence which earned him the the MOTM award. He was in the right place at the right time to block efforts from Paul Pogba and his former PSG Teammate Cavani and topped the stats for clearances for a valuable clean sheet. Another Option for an Inform for this Game could be Chelsea's new goalkeeper Mendy who made a total of 4 saves, especially the one against Rashford just before the final whistle could earn him an Inform.

Danilo D'Ambrosio CB - Inter Milan - 77 -> 81 Rated: This is also quiet a hard position to fill, there aren't really that many standout performances this week when it comes to defenders. Therefore i've chosen Inter Milan's D'Ambrosio who managed to keep a clean sheet in Milan's 2-0 win against Genoa and also scored a Goal.

Federico Valverde CM - Real Madrid - 83 -> 85 Rated: It was „El Classico“ time in La Liga, the biggest Match of the season and both teams struggled at the start of the season to find their form. Real Madrid went away with a 3-1 win, a big victory for Zidane who was under pressure after two shock defeats in the last two Games. Valverde gave Madrid the early lead with using his quick pace to pick out a lane, run into the box and score just 4 minutes in. Versatile in defence and offence all game, keeping De Jong in his pocket. Great performance from the Midfielder and awarded with a 2/3 from Marca.

Luis Alberto CM - Lazio Roma - 85 -> 86 Rated: After Lazio's surprising defeat against Sampdoria Genoa last Weekend they needed a win to get back on track against Bologna but it took Lazio until 9 minutes after halftime and a superb solo from Luis Alberto to take the lead. He dispossessed Danilo, nutmegged Svanberg and fired the shot past Skorupski. This solo and a solid performance overall got awarded with a 7.5 from Gazzetta and a spot in my prediction.

David Silva CAM - Real Sociedad - 86 -> 87 Rated: When it comes to La Liga you would expect either Barcelona or Real Madrid to be on top of the table but it's Real Sociedad. They faced the promoted SD Huesca and it came as expected, Sociedad ran away with a 4-1 win. There were 2 Players who stood out, one was Oyarzabal but with him currently being in TOTW4 i'm happy to take the former Manchester City Midfielder David Silva who assisted two Goals and got awarded with a 3/3 from Marca.

Edin Visca RM - Istanbul Basaksehir - 83 -> 85 Rated: It looks like the 2019 champion is finally back on track in the League after struggling at the start of the season. They faced Antalyaspor on Saturday and ran away with an impressive 5-1 win and their third win in a row. The bosnian right Midfielder Edin Visca managed to put himself on the scoresheet with 2 goals and assisting another which should be enough for him to get an Inform.

Karl Toko-Ekambi LM - Olympique Lyon - 78 -> 82 Rated: For the second week in a row the Cameroon Forward scored a brace, this time it was in a big win against AS Monaco from the LW position. But this week i think he'll finally get his Inform for his performance, being awarded with a 8/10 and inlcuded in L'Equipe's Team of the Week.

Robert Lewandowski ST - FC Bayern - 92 -> 93 Rated: This looks like a guaranteed Inform but to be clear from the start, i can see him being excluded due to the fact he'll most likely win Bundesliga POTM for October. But that aside it would be a deserved Inform. Lewandowski against scored a Hattrick in Bayern 5-0 win against Frankfurt, now leading the scoreboard with 10 Goals in 5 Games and being named Player of the Week for the third time in a row.

Wilfried Zaha ST - Crystal Palace - 83 -> 85 Rated: This possible Inform could be really good and will surely have big demand. Crystal Palace managed to beat Fulham at Home 2-1 and Zaha having a big impact with 1 Goal and providing the assist for Riedewald. He was a constant thread in the first half, back to his best and got a deserved goal in the second half and therefore he got awarded with a huge 9/10 and MOTM.

Marco Silvestri GK - Hellas Verona - 77 -> 81 Rated: The second goalkeeper this week is a hard one to pick with not that many options available. I've decided to include Verona's Goalkeeper with him having a number of 5 saves in a 1-1 draw against Juventus Turin.

Arbilla LB - SD Eibar - 75 -> 81 Rated: A position hard to fill with the low amount of defenders this week from the top 5 Leagues and therefore i've decided to include Arbilla. He hasn't added a goal or an assist to his game but overall got a high match rating in Eibar's 1-0 win over FC Sevilla which is a shocking and big result from this weeks La Liga fixtures.

Maximilian Arnold CM - VFL Wolfsburg - 79 -> 82 Rated: Wolfsburg faced the newly promoted Arminia Bielefeld on Sunday and after four draws in a row they've finally managed to end it with a win. It took them only 2 minutes to score both goals and the one who was scoring one and also providing the assist was Wolfsburgs Midfielder Maximilian Arnold who got awarded with a 1.5 plus MOTM from Kicker.

Pedro Goncalves CAM - Sporting CP - 76 -> 81 Rated: Another well rounded Inform could come from Liga NOS in person of Pedro Goncalves. The portuguese Midfielder scored a brace in Sporting's 2-1 win against Santa Clara from CAM and helped his side to not lose touch to Benfica.

Danny Ings ST - Southampton - 80 -> 83 Rated: Not the biggest Game this week in the Premier League but surely one of the reults not many people would have expected. Southampton faced the unbeaten Everton and ran away with an impressive 2-0 win at St Mary's Stadium. Danny Ings was the provider of the assists for both goals, should have deserved to score one by himself but even without scoring it was another excellent performance.

Joao Pedro CF - Cagliari Calcio - 79 -> 82 Rated: Cagliari always was providing games with a fair amount of goals and that's what happened when they've faced Crotone. The outcome of the match was a 4-2 home win for Cagliari, their second win in a row. The brazil forward Joao Pedro scored one and assisted another to help his side secure the 3 points against Crotone, the team at the bottom of the table.

Anderson Talisca ST - Guangzhou Evergrande - 82 -> 84 Rated: This Inform might interest a lot of people and it comes from the new Super League Championschip Playoff Matches. It was the second leg between Guangzhou Evergrande and Hebei CFFC where Guangzhou ran away with a 5-0 home win to make it 8-1 on aggregate. There are three players who could possibly get an Inform from that game, my punt is the brazil forward Anderson Talisca who scored a brace to help his team proceed on to the next round.

Bart van Hintum LB - FC Groningen - 68 -> 76 Rated: The first but not the last Inform from the Eredivisie could come from FC Groningen who faced Fortuna Sittard and ran away with a 3-1 win. The dutch defender Bart van Hintum was involved in a three Goals with scoring one and assisting the other two and earned a 8.5 match rating. There have been a ton of Hattricks this week so he might miss out but for me it feels like 5 strikers in reserves are just one too much.

Boulaye Dia ST - Stade de Reims - 73 -> 79 Rated: As i've mentioned earlier, there have been a ton of Hattricks this Week and some might miss out on an Inform but one i can't see being avoided is Boulaye Dia who managed to get himself a Hattrick in Reims 4-0 win against Montpellier. To be fair Montpellier was down to 9 men in the first half but with Dia being awarded with a 8/10 from L'Equipe he got a spot in my Prediction.

Sergio Santos ST - Philadelphia - 68 -> 76 Rated: We often see Hattricks from MLS games and so we do this time. Philadelphia Union faced Toronto and it ended in a 5-0 win for Philadelphia, the one to stood out was Sergio Santos who scored a Hattrick for his side. Could be a decent Inform.

Lassina Traoré ST - Ajax Amsterdam - 68 -> 76 Rated: We have seen a lot of Hattricks this week who might miss out on an Inform but one who definetly won't is Traoré. Ajax Amsterdam trashed VVV-Venlo 13-0 to break the Eredivisie record for biggest scoreline and the Striker from Burkina Faso scored 5 goals & assisted another 3 in Ajax' record win which sends them to the top of the Eredivisie.

Patrick Bamford ST - Leeds United - 71 -> 78 Rated: It was the opening match of the matchday with Leeds facing the only unbeaten Team in the Premier league, Aston Villa and it's safe to say that the outcome was quite surprising. Leeds United took the 3 Points home with an impressive 3-0 win and the undisputed Man of the Match was Leeds' forward Patrick Bamford who scored a second-half Hattrick.