FIFA 21 Team of the Week 4 Predictions

Published on by Simpleblue 60 Comments 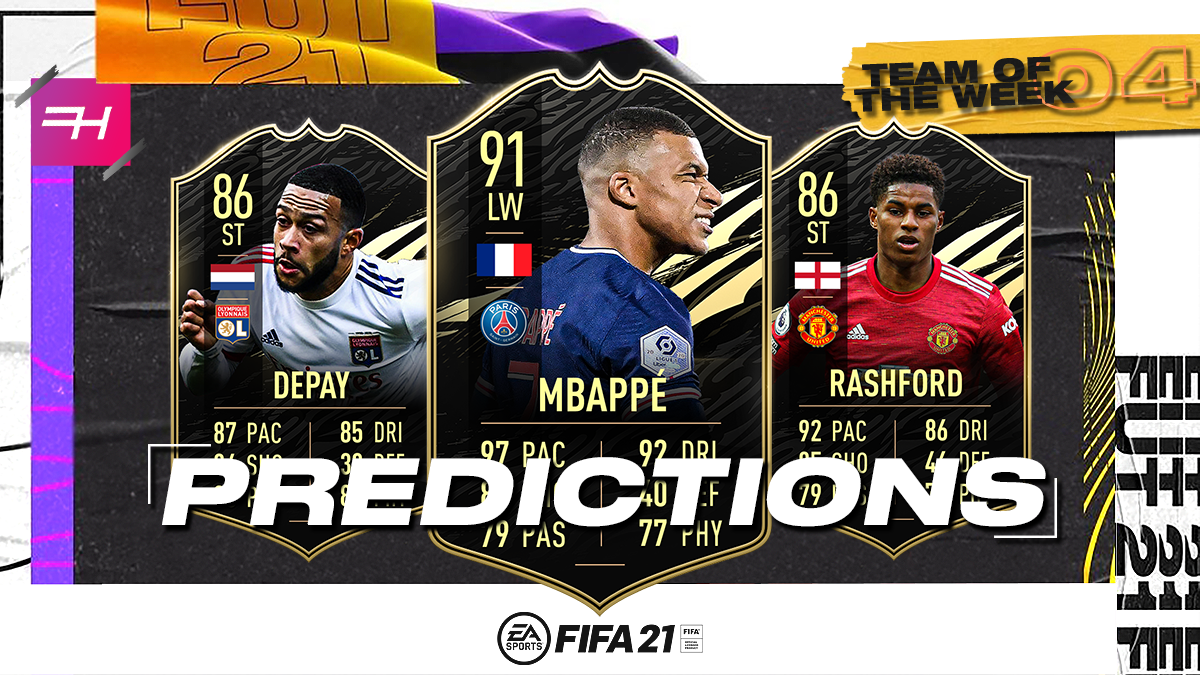 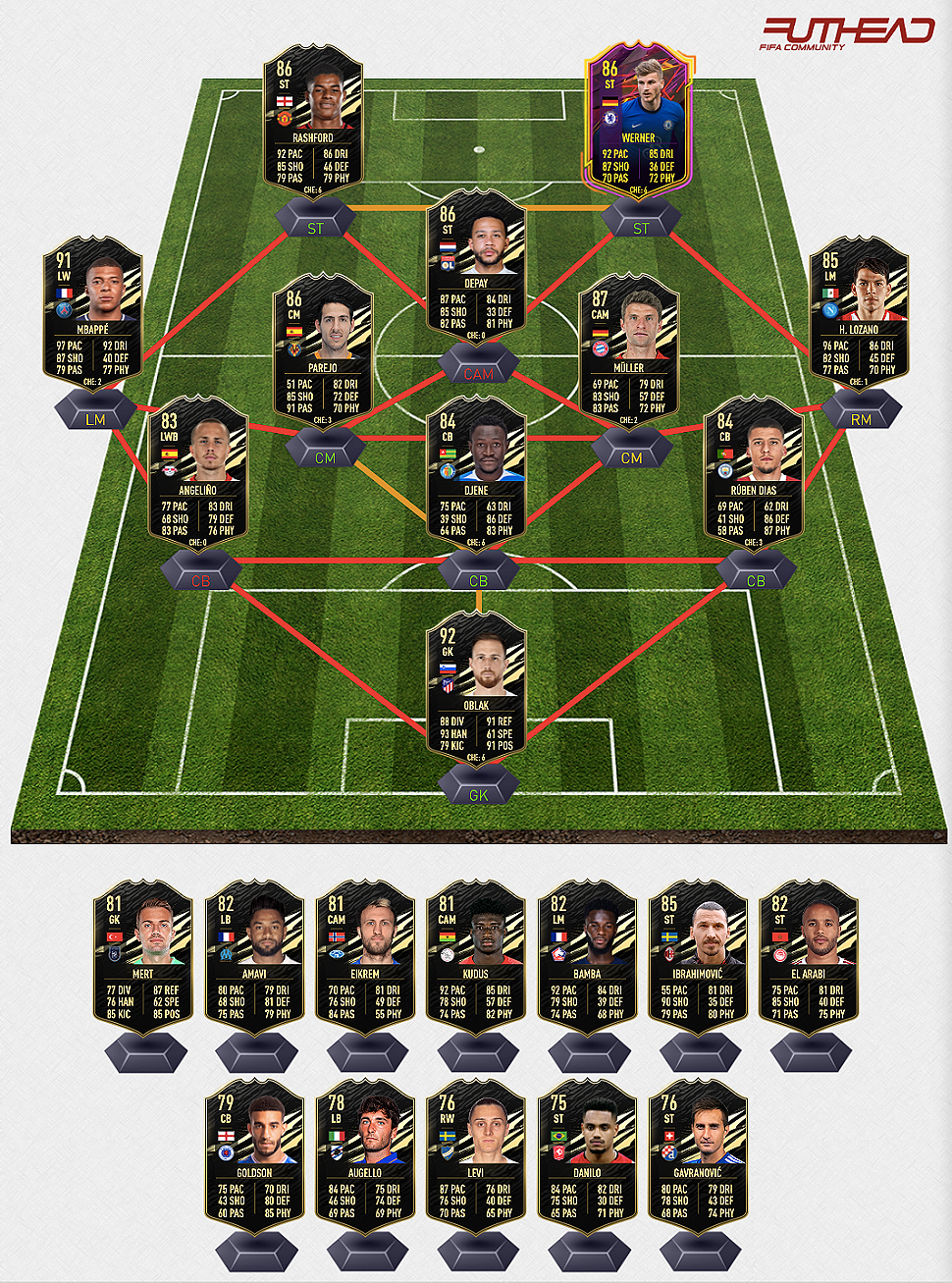 Jan Oblak GK - A. Madrid - 91 -> 92 Rated: A really in demand Inform could come from La Liga. In a game where Celta Vigo could have scored a few goals, Jan Oblak again showed why he is one of the best Goalkeepers in club football. He managed to make a total of 5 saves against Celta Vigo with one of them being a close 1 on 1 against Santi Mina, as a result of his saves and also the offensive work of his team A. Madrid won the Game 2-0 and Marca awarded his performance with a 3/3.

Djené CB - FC Getafe - 82 -> 84 Rated: With Real Madrid surprisingly losing their game earlier against the new promoted Cadiz, Barcelona had the chance to close the 3 Points gap but the outcome of this game was another surprise. Getafe managed to beat Barcelona 1-0 at home due to a penalty and the Togolese CB played a major part in keeping the clean sheet. He got awarded with 2/3 Stars from Marca which is the Reason I think he'll make it into TOTW.

Rúben Dias CB - Manchester City - 81 -> 84 Rated: We've had a ton of top games this weekend with one of them being Manchester City facing Arsenal in the Emirates. Manchester City managed to win the game 1-0 with Sterling being the only goalscorer and you might think he'll get the Inform but i've gone with the Portuguese CB who played at the heart of City's three-man defence. His ball out from the back to Mahrez led to City's opener and an important late clearance underlined his solid performance on his home debut which could result in his first inform for City.

Angelino LWB - RB Leipzig - 80 -> 83 Rated: The first inform coming from the Bundesliga this week could be Man City's former Player Angelino. He found his place in Leipzig's System on the LWB and again showed a solid performance against Mainz 05 when Leipzig ran away with a 2-0 win which remains them on top of the table. Angelino got himself a goal from a header and also kept the clean sheet. As a result Kicker awarded him with a 2 and a spot in their TOTW.

Daniel Parejo CM - FC Villareal - 85 -> 86 Rated: It seems like it's going to be a tradition that Daniel Parejo is getting an Inform pretty early on FUT but this time it's not for Valencia. Villareal was playing Valencia at the Estadio de la Ceramica in the Valencian Community derby and it's just irony that it was on the former Valencia captain to decide this game with his Goal in the 69. minute, therefore and for a really solid performance overall he got awarded with 3/3 Stars on Marca.

Thomas Müller CAM - FC Bayern - 86 -> 87 Rated: FC Bayern faced the promoted Arminia Bielefeld in a Game where everyone expected an easy win and after the final whistle Bayern went away with a 4-1. That being said, Lewandowski and Müller both scored two and assisted one goal and even though Lewandowski was named MOTM Thomas Müller is the one i'm predicting to get the Inform from this Game simply because Lewandowski just recently was in TOTW. Müllers performance was nearly levels with Lewandowski and got awarded with a 1.5 from Kicker.

Hirving Lozano LM - SSC Napoli - 83 -> 85 Rated: The first second Inform in Fifa 21 could come for „Chucky“ Lozano. Napoli faced Atalanta Bergamo, the goal scoring machine in Serie A so far and run away with an impressive 4-1 win. It was on Lozano to score two Goals from the LM position and helped his Team to secure the important 3 Points after they got punished with a 0-3 on the green table the Week before for not being allowed to travel to Turin. His performance got awarded with a 8 from Gazzetta Dello Sport and therefore I can see him getting his second Inform in Fifa 21.

Memphis Depay ST - Olympique Lyon - 85 -> 86 Rated: Another really good looking inform could come from Olympique Lyon who managed to win 3-2 against Racing Strasbourg. The one who ran the show was Memphis Depay who was just about to move to Barcelona. After he has assured that he will now stay in Lyon for the rest of the Season , the Dutchman proofed it on the pitch with assisting all three Goals. His technique and his passing quality wreaked havoc in the Strasbourg defense and L'Equipe awarded him with a 8/10 and a spot in L'Equipes TOTW.

Kylian Mbappé LW - Paris SG - 90 -> 91 Rated: In the absence of Neymar, the 2018 World Champion had fun on is own. He was author of an incalculable number of occasions and has done a lot of trouble to the defenders of Nimes everytime he was on the ball. This resulted in 2 goals for him from the LW and being awarded with a 8/10 and MOTM from L'Equipe which should be enough for the french forward to get his first inform in Fifa 21.

Timo Werner ST - FC Chelsea - 85 -> 86 Rated: Another upgrade for a player who just got an OTW comes for Timo Werner. Altough Chelsea couldn't win the game against Southampton due to a late goal from Vestergaard Timo Werner showed why Chelsea paid a lot of money for him. Two lethal finishes from the brilliant German and an assist for his german mate Havertz plus being named MOTM should be enough for an Inform altough the game ends in a draw.

Marcus Rashford ST - Manchester United - 85 -> 86 Rated: Until just minutes before the final whistle it looked like Newcastle could secure a point at home against Manchester United. One reason that didn't happened was Englands young forward Marcus Rashford. He assisted Bruno Fernandes' and Wan-Bissakas late goals to make it 3-1 in 4 Minutes and scored the final fourth which should be enough to let him get his first inform.

Mert Gunok GK – Istanbul Basaksehir - 77 -> 81 Rated: Istanbul Basaksehir won the League last Season when everyone expected the obvious Teams but they're struggeling in the actual Season with 3 losses and a draw so it was just at the right time for them to win their first Game. They faced Trabzonspor and managed to secure the 3 Points with a 2-0 win where Mert Gunok was the one to stood out with a total of 6 saves. The position for the second GK this week is a hard one with a few choices available so this is a bit of rolling the Dice.

Jordan Amavi LB - Olympique Marseille - 78 -> 82 Rated: The last 3 Games haven't been really successful for Marseille, they all ended in a 1-1 draw so there was a bit pressure to keep the 3 Points at home against Bordeaux. This time it went well and Marseille was able to win 3-1. One of the Players having a big impact was the french LB who scored the second Goal and caused Marseille's third thanks to his shot deflected by Pablo. L'Equipe awarded him with a 7/10 and a spot in their TOTW and so am I.

Mohammed Kudus CAM - Ajax Amsterdam - 75 -> 81 Rated: Ajax Amsterdam signed a few young Players in the last transfer window, one of them is Mohammed Kudus who is starting to look like a good transfer. He managed to get himself a goal and two assists in Ajax' 5-1 win against Heerenveen and therefore earned POTW.

Jonathan Bamba LM - Lille - 78 -> 82 Rated: Derby du Nord in Ligue 1 between Lille and Lens and Lille ran away with an impressive 4-0 win. Even more impresse was Lille's Jonathan Bamba with a Goal and two Assists for Ikone and Yazici. His calls and dribbles hurt the Lensois for 90 minutes, the left midfielder weighted heavily in the Derby and therefore got awarded with a 8/10 and POTW from L'Equipe.

Zlatan Ibrahimovic ST - AC Milan - 83 -> 85 Rated: It was Derby time in Italy and AC Milan came into the derby della madonnina not having beat Inter Milan in years. Zlatan Ibrahimovic just recovered from Covid-19 but that's no reason for the swedish superstar not to show what he is still able to do at 39 Years. He was the decisive man on the pitch with scoring both goals for his side which resulted in a final 2-1 win for his Club and a 8/10 from Gazzetta Dello Sport.

Youssef El-Arabi ST - Olympiacos - 78 -> 82 Rated: The first of a few Hatt-ricks this week is coming from Greece. Olympiacos faced Atromitos and ran away with a 4-0 win. The main man was Youssef El-Arabi who scored three of the four Goals and what makes it even more impressive is that he was subbed in right before half-time.

Connor Goldson CB - Glasgow Rangers - 72 -> 79 Rated: I would be heavily surprised if Connor Goldson won't get the inform this week. It was nothing but the biggest game of the season in Scotland with Celtic facing the Rangers in the Old Firm Derby and the Rangers ran away with an impressive 2-0 win. The undisputed Man of the Match was Connor Goldson who cam up with two big moments scoring both Goals to win the game for Gerrard's men and also was rock solid ath the back. It was a performance of a Leader and a Inform worth performance without a doubt.

Tommaso Augello LB - Sampdoria Genoa - 70 -> 78 Rated: One of the more surprising Results coming from the Serie A with Sampdoria Genoa beating Lazio Roma with 3-0. One of the goal scorers was the club legend Quagliarella but someone who stood out more was LB Augello who got himself a Goal & Assist and also helped his team to keep a clean sheet against last seasons Serie A top scorer Ciro Immobile.

Jonathan Levi RW - IFK Norrköping - 68 -> 76 Rated: Another Inform is coming from another Hatt-rick, this time it was on Norrköping's Jonathan Levi who scored all three Goals in their 3-1 win against Varbergs from the RW.

Danilo ST - FC Twente - 65 -> 75 Rated: FC Twente faced Willem II in the Eredivisie on Saturday and ended up winning the Game 3-0. Man of the Match was the Brazil striker Danilo who scored two and assisted the third Goal for his team.

Mario Gavranovic ST - Dinamo Zagreb - 68 -> 76 Rated: This Inform could come from a Game between Dinamo Zagreb and HNK Gorica, the Top Match in Croatia this Week. Zagreb managed to win the Game 3-2 with Gavranovic scoring all three Goals which remains Zagreb unbeaten on top of the Table.