FIFA 21 Team of the Week 3 Predictions

Published on by Simpleblue 29 Comments Updated on 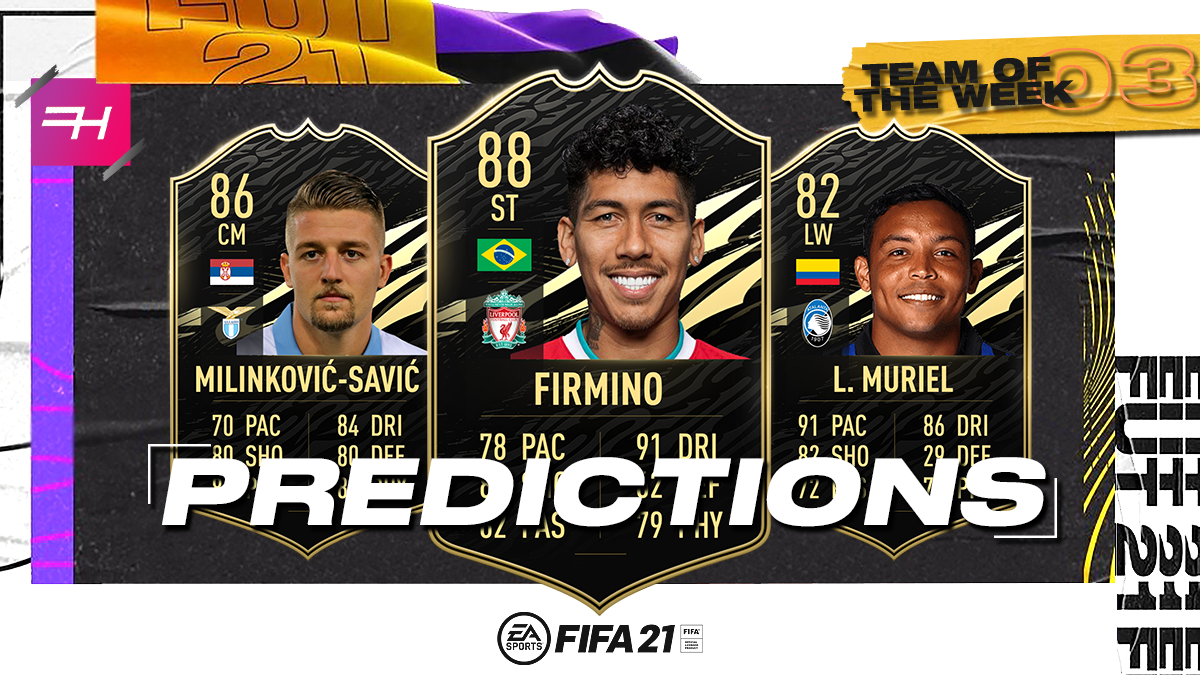 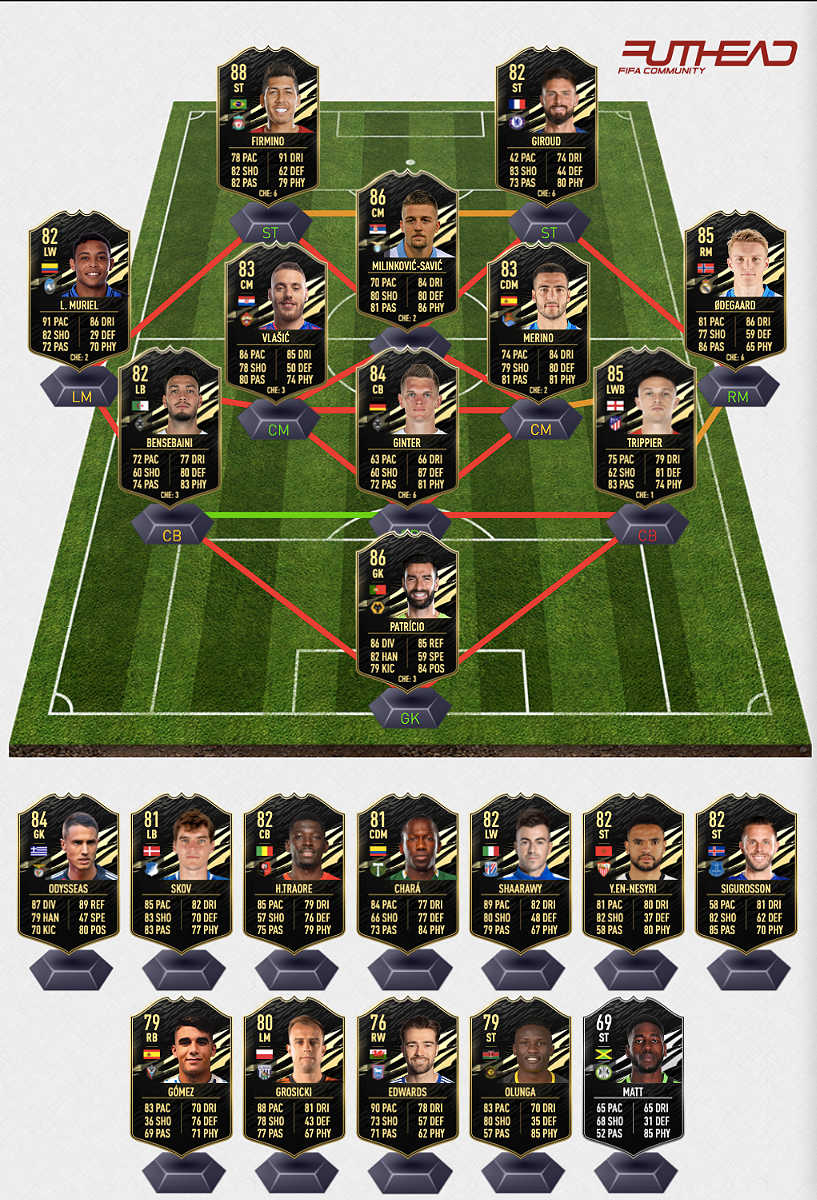 Rui Patrício GK - Wolverhampton Wanderers - 84 -> 86 Rated: Goalkeepers are hard to choose this Week, we haven't seen any standout Performances which makes it hard to pick. I've decided to go with Rui Patricio. The Portuguese managed to keep two clean sheets, a 0-0 in a friendly against Spain Mid-Week where he also got 6 Saves and also another 0-0 against the current World Champion France with Superstar Kylian Mbappé. That being said, i can see Patricio picking up the Inform on Wednesday.

Ramy Bensebaini LB - Borussia Mönchengladbach - 79 -> 82 Rated: It's always not easy to select Defenders during International Games but with Gladbach's Bensebaini scoring the only Goal in Algeria's 1-0 win over Nigeria in a Friendly Match and the rare Options this Week i've decided to include him.

Matthias Ginter CB - Borussia Mönchengladbach - 82 -> 84 Rated: After 4 Draw's in a row Germany finally managed to win a Game and it was their first one in the Nations League, an important one to keep Ukraine behind and reduce the gap to Spain. There wasn't really someone who stood out but Matthias Ginter was the one scoring the opening Goal with a Header and got awarded with a 2,5 from Kicker. Antonio Rüdiger got awarded with MOTM but i feel like the Assist just isn't enough for him.

Kieran Trippier LWB - Atlético Madrid - 83 -> 85 Rated: Another Fullback might find his way into TOTW3 with Kieran Trippier. The English Fullback from Atlético Madrid got an Assist from the RWB Position Mid-Week in a 3-0 win against Wales but more important he also got the Assist for Mason Mount who scored the 2-1 Winner in the Top Game against Belgium which put England on top of their Group.

Sergej Milinkovic-Savic CM - Lazio Roma - 85 -> 86 Rated: Serbia had to face Norway in the Nations League Playoffs and it was on Milinkovic-Savic to shine with his first 2 Goals for the Serbian National Team. After Norway managed to equalise the lead from the first Goal of SMS it was again the Serbian Midfielder who put Serbia back in the lead in extra-time to beat Norway after 120 Minutes.

Nikola Vlasic CM - CSKA Moscow - 80 -> 83 Rated: A really solid looking CM Inform could come from Croatia with Vlasic scoring 1 Goal in Croatia's 2-1 win against Sweden from the CM Position which ended in being Croatia's first win in the Group.

Mikel Merino CDM - Real Sociedad - 80 -> 83 Rated: Normally i wouldn't include a Central Midfielder who just got an Assist but this Week is tough so i've decided to include Mikel Merino. The Spanish Midfielder got the Assist for Oyarzabal's winning Goal in Spains 1-0 win against Switzerland and also had a solid overall Performance from the CDM Spot. It really wasn't a challenging Game for Spain but as said, Options on higher rated Midfielders are rare this Week.

Martin Ødegaard RM - Real Madrid - 84 -> 86 Rated: After Norway losing the Playoff Game against Serbia Mid-Week and not qualifying for the Euro's 2021 they had to face Romania who have been first in the Group before the Game. Norway running away as 4:0 winners and once again Erling Haland was the Standout Player. But with him already having the Inform i've gone with Odegaard who assisted two Goals from the RM Position. The Other Option for this Game could be RB Leipzig's new signing Alexander Sørloth who also got one Goal & one Assist.

Luis Muriel LW - Atalanta Bergamo - 79 -> 82 Rated: The first Round of the CONMEBOL World Cup Qualification started and Colombia ran out a convincing 3-0 win after an impressive Performance against Venezuela. Atalanta Bergamo's Luis Muriel was the main man to put his side into a comfortable 3-0 lead at Halftime with scoring a Brace from LW.

Roberto Firmino ST - FC Liverpool - 87 -> 88 Rated: This is a tough one to select with Brazil steamrolled Bolivia in a 5-0 win in Sao Paulo. Brazil's Superstar Neymar again has shown a nearly perfect Performance with assisting two Goals and being involved in nearly every dangerous Situation but I've decided to go with Liverpool's Forward Firmino who scored a Brace and missed a third.

Olivier Giroud ST - Chelsea London - 79 -> 82 Rated: There wasn't really any doubt that France would win against Ukraine at Home in that Friendly Match and exactly that happened with the host running away as 7-1 winners. Although France scored 7 Goals Giroud was the only Player who has put 2 of them on his Scoresheet and got awarded with a 8/10 from L'Equipe.

Odisseas Vlachodimos GK - Benfica - 81 -> 84 Rated: As i said earlier, there aren't any standout Performances from Goalkeepers this Week which makes it hard to decide. Benfica's Goalie Vlachodimos managed to save a Penalty in Greece 2-0 win against Moldova which could be enough for him to get the Inform this Week.

Robert Skov LB - Hoffenheim - 75 -> 81 Rated: An important 3-0 win for Denmark against Iceland to keep in touch with Belgium in the Group and Robert Skov from Hoffenheim managed to score a Goal from the LB Position. That being said, Denmark also won their Mid-Week Fixture against Faroer Islands 4-0 and another Option for the Spot could be Maehle who also got one Goal. But with the Game against Iceland being more important i've decided to go with Skov.

Hamari Traore CB - Stade Rennais - 79 -> 82 Rated: This Inform could be a really useable one even though he isn't easy to link but with Traore scoring and assisting a Goal in Mali's 3-0 win against Ghana from the CB Position i can see him getting in. They also kept the clean sheet which might help him despite the Fact is was a friendly Match.

Diego Chará CDM - Portland Timbers - 75 -> 81 Rated: The MLS offered quite a few Options for this Weeks TOTW but with the lack of higher rated Midfielders i've decided to include Diego Chará who managed to get two assist from the CDM Position in Portland Timbers 3-0 victory over San Jose Earthquakes.

Stephan El-Shaarawy LW - Shanghai Shenhua - 79 -> 82 Rated: Even though Italy was playing with most of their second Squad in that friendly they managed to keep a clean sheet and won 6-0 against Moldova. There have been 5 different Goal Scorers but the only one who put himself on the Scoresheet twice was Stephan El-Shaarawy who played on the LW, it looks like the "Pharaoh" is picking up an early Inform.

Youssef En-Nesyri ST - FC Sevilla - 78 -> 82 Rated: This one is an Option i've taken the punt on due to the Fact that higher rated Strikers are rare this Week. The Moroccan Strikers scored one Goal in their 3-1 win against Senegal which could result in an Inform. Another possible Option from that Game would be Achraf Hakimi who assisted the first Goal from RM and due to the Fact he just recently got his OTW i can see that happen too although it's a huge stretch.

Gylfi Sigurdsson ST - FC Everton - 79 -> 82 Rated: Another Nations League Playoff Game and this time it was Iceland facing Romania at Home. Iceland managed to win the Game 2-1 and It was nobody less than Everton's Midfielder who scored both Goals from the ST Position which allows Iceland to play the Playoffs Final for a Spot in the 2021 Euro's.

Victor Gómez RB - CD Mirandes - 72 -> 79 Rated: A Potential Inform coming from a domestic Fixture in La Liga 2 is Victor Gomez from CD Mirandés who managed to score a Goal and assisted the first one which ended in a 2-0 win over CE Sabadell.

Kamil Grosicki LM - West Bromwich Albion - 74 -> 80 Rated: Poland faced Finnland in a Friendly Mid-Week and Poland won that Game pretty easily 5-1. With Polands Superstar Lewandowski not being in the Squad it was West Bromwich's Kamil Grosicki who managed to score a first-half Hattrick from LM.

Gwion Edwards RW - Ipswich Town - 67 -> 76 Rated: We usually have a few Players from lower Leagues scoring Hattricks but not this time. Gwion Edwards scored a Brace and assisted another Goal in Ipswich' 4-1 away win against Blackpool which means Ipswich is still unbeaten on top of the League after 5 Matchdays.

Michael Olunga ST - Kashiwa Reysol - 72 -> 79 Rated: There have been a fairly amount of Silver Strikers this Week scoring 2 Goals so this one is a bit hard to decide but i've taken Kashiwa Reysol's Michael Olunga who scored a brace in a 4-3 Victory over Vissel Kobe. Another Option from that Game could be Ataru Esaka, the Japanese Forward also scored a Brace from the CAM Position.

Jamille Matt ST - Forest Green - 59 -> 69 Rated: The only silver Striker making the cut comes from the English League Two fixtures with the Jamaican Strikers managing to bag a Hattrick in a 4-1 win over Scunthrope.