FIFA 21 Team of the Week 2 Predictions

Published on by Darren8196 68 Comments Updated on 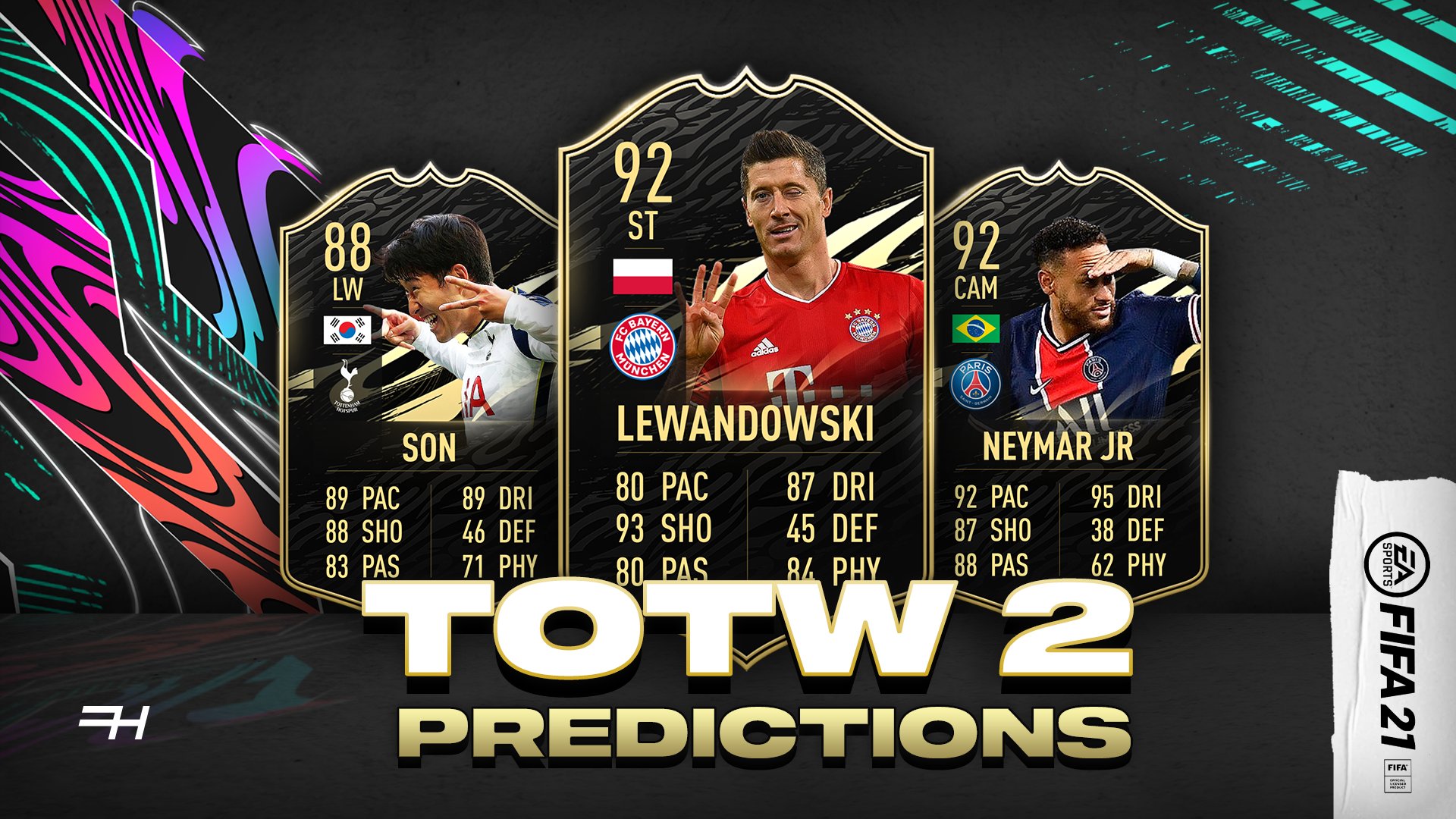 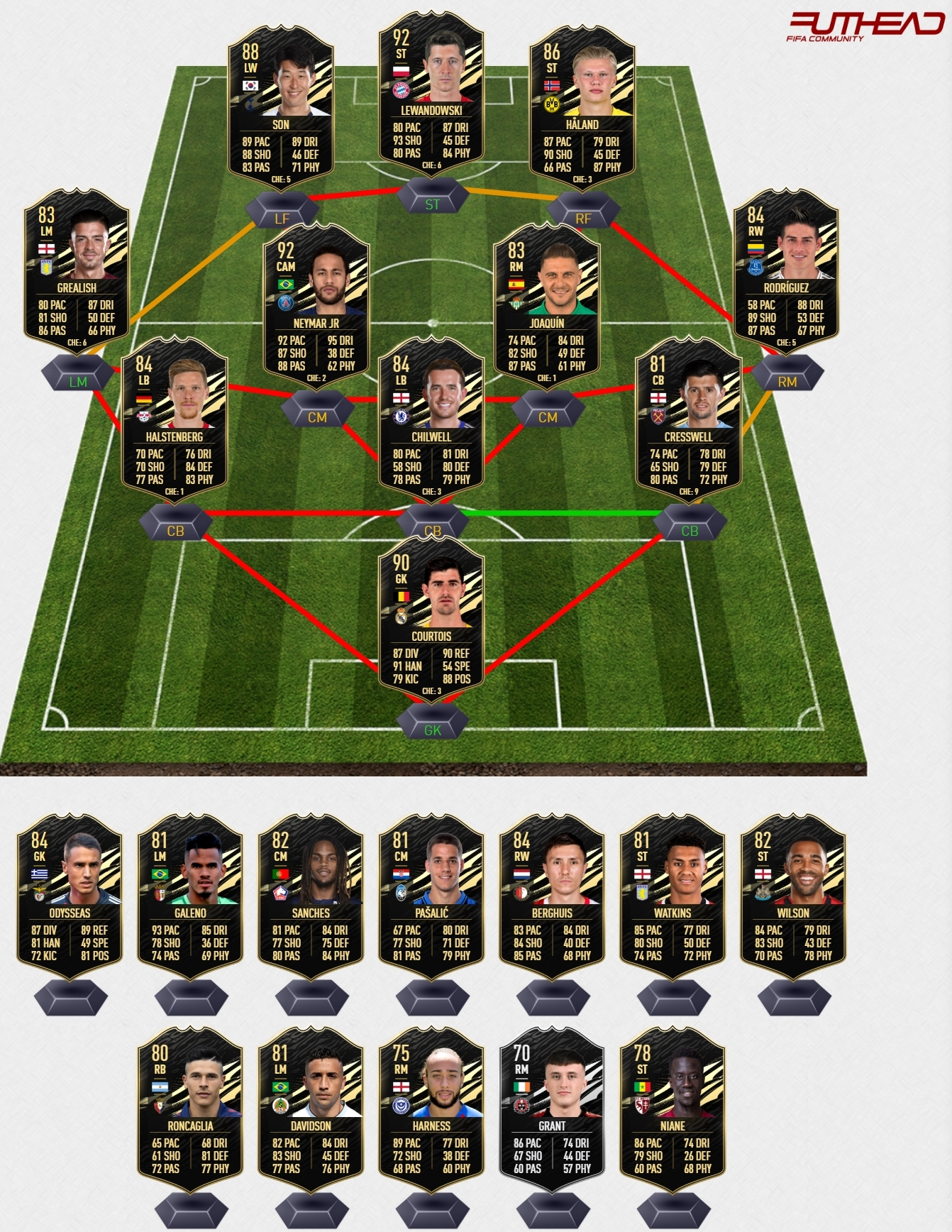 Thibaut Courtois GK - Real Madrid - 89 -> 90 Rated: We start a great TOTW with a great keeper. The Belgian stopper kept two important clean sheets to help keep Real Madrid at the top of the table. Despite both matches being against teams currently in the bottom three, Courtois was MOTM in both games as Real beat Real Valladolid 1-0 midweek then won 2-0 against Levante.

Marcel Halstenberg LB - RB Leipzig - 82 -> 84 Rated: Schalke extend their run of their opponents getting an IF against them to three. After Bayern's 8-0 rout and Fullkrug's hattrick for Bremen, this time it was Leipzig's turn to face the struggling Gelsenkirchen side. With Timo Werner now gone, penalty duties seem to have been left to Halstenberg, who made no mistake from the spot. He also baggeed an assist as Leipzig kept their lead at the top of the table with a 4-0 win.

Ben Chilwell LB - Chelsea - 81 -> 84 Rated: After completing his big money move to Chelsea over summer, the 23 year old has slowly been making his return from injury via the EFL Cup. His Premier League debut will definitely be one to remember, with the left back scoring the opener before setting up Zouma for Chelsea's second in a 4-0 win over Crystal Palace.

Aaron Cresswell CB - West Ham - 77 -> 81 Rated: The Hammers have found some great form this last week. Having become full of confidence after their 4-0 win over Wolves last week, they made a slow start but ultimately came out victorious against Leicester. Cresswell, playing at centre back instead of his usual left back role, was still able to provide attacking returns as he set up the first two goals in a 3-0 victory.

Jack Grealish LM - Aston Villa - 80 -> 83 Rated: Sunday night in England was perhaps the craziest night of football in the country in a while. The second of these games saw Aston Villa beat Champions Liverpool 7-2. Jack Grealish was the star of the show for Villa, setting up three for his teammates before scoring the last two goals himself.

Neymar CAM - PSG - 91 -> 92 Rated: The second 90+ rated card this week is Neymar. PSG seem to have got back to their old selves after a couple of blunders at the start of the season, the Ligue 1 Champions put 6 past Angers. Neymar scored either side of half time and then set up one to earn himself a place in L'Equipe's TOTW, and I expect also the FIFA one.

Joaquín RM - Real Betis - 80 -> 83 Rated: This week is tough for La Liga options, with only Courtois really standing out. However, I can't see him being the only one featuring in the TOTW, so I have included Joaquín. The 39 year old is still going strong for his boyhood club, and bagged a couple of assists this weekend as Betis won 2-0 against Valencia, while also featuring in the Marca Team of the Week.

James Rodríguez RW - Everton - 82 -> 84 Rated: Carlo Ancelotti just knows how to get the best out of James. The Colombian playmaker has been in great form since arriving at Goodison. However it was against Brighton this weekend that he shone brightest so far for the Toffees with his first brace in 18 months while also assisting one.

Son Heung Min LW - Spurs - 87 -> 88 Rated: Before Villa's rout of Liverpool, we saw what everyone thought would be the upset of the weekend as Spurs demolished Manchester United 6-1 at Old Trafford. Son was the key man yet again for the visitors, with his two goals and assist effectively killing off the game by the 37th minute. Teammate Kane also got two goals and an assist, but with one of his being a penalty, I have favoured the Korean winger.

Robert Lewandowski ST - Bayern Munich - 91 -> 92 Rated: After their Supercup triumph midweek and him collecting the UEFA Men's Player of the Year Award, Lewandowski showed just why he is ranked so highly with an excellent performance against a Hertha Berlin side who were no pushovers. However, Lewa's four goals, including a 92nd minute penalty, were enough for Bayern to seal the 4-3 victory and earn himself the Kicker Player of the Week.

Erling Braut Håland ST - Dortmund - 84 -> 86 Rated: A couple of disappointing games in the last week for the Norwegian prodegy and Dortmund were put behind them with a 4-0 victory over Freiburg. Håland scored twice and had several chances to score his third - none better in the 91st minute when he was 1v1 against the keeper and unselfishly passed to Passlack to finish off the game. Gio Reyna was MOTM in the game for his three assists, but I can't see the new cover star being passed over for his American teammate.

Odisseas Vlachodimos GK - Benfica - 81 -> 84 Rated: Three keepers in the Portuguese league saved penalties over the weekend, which didn't make selecting this spot easy. I have gone for the Greek keeper for Benfica, which may come off as a surprising choice given his team won 3-2 against newly promoted Farense. However, he made some incredible saves during a spell when the visitors were well on top, and he saved the same penalty twice due to the initial kick having to be retaken due to attackers running into the box too early.

Galeno LM - Braga - 77 -> 81 Rated: Braga have been there or thereabouts at the top of the Portuguese top flight for a while now, so this was a vital first win of the season to get them off the mark. Their Brazilian winger was crucial in that result with two goals and an assist in the first half to get them a 4-0 win.

Renato Sanches CM - Lille - 78 -> 82 Rated: The Portuguese midfielder has only just turned 23, but has already had a rollercoaster career. He seems to finally be finding his feet at Lille, as he looks to try and live up to his incredible hype from his younger days. He may have only scored once to help his side to a 3-0 victory over Strasbourg, but his overall performance was enough to see him included in the L'Equipe TOTW, which is enough for me to include him here.

Mario Pašalić CM - Atalanta - 77 -> 81 Rated: Atalanta keep up their record of being one of the most entertaining teams in Europe as they have scored 4 or more goals in each of their first three league games. After Papu Gómez got in last week, we now move to their Croatian creator Pašalić, who scored and assisted once in a 5-2 win over Cagliari. Although I expect more Serie A players such as Domenico Berardi or Theo Hernández to feature, I'm simply not sure how to fit them so I have opted to exclude them.

Steven Berghuis RW - Feyenoord - 81 -> 84 Rated: Having been ignored last weekend for his goal and assist, I can't see the Dutch international being ignored this time round. He bagged a second half brace as Feyenoord came from behind to beat Willem II, with the winger picking up the Player of the Week in the process. He now sits two clear at the top of the scoring charts as well with his 6 goals in 4 games showing how great his form is.

Ollie Watkins ST - Aston Villa - 76 -> 81 Rated: We saw only two weeks ago in TOTW 45 that EA don't seem to mind putting two players from the same club in the same TOTW, and that's what I'm banking on again here. Although Grealish was the star of the show, I can't ignore the excellent performance from Watkins with his hattrick and assist. If EA were to ignore him, I would expect either Laurent Depoitre or Patson Daka who had two goals and an assist each to replace Villa's new signing.

Callum Wilson ST - Newcastle - 78 -> 82 Rated: The summer signing from Bournemouth has made a quick impact since signing for the Magpies to get them up and running this season. His performances have shown exactly what he is capable of as he set up Allan Saint-Maximin before scoring two of his own in Newcastle's 3-1 win over Burnley. He has now been involved in all of Newcastle's league this season when he has been on the pitch, which is in incredible return.

Facundo Roncaglia RB - Osasuna - 69 -> 77 Rated: Osasuna suffered back to back defeats in recent weeks before putting things right against Celta Vigo. Having been benched in last weeks 3-1 loss, the Argentinian international stamped his claim on the starting right back spot with a great long range goal in the first half, before his wayward shot was deflected into the net in the second half to seal a 2-0 win.

Davidson LM - Alanyaspor - 77 -> 81 Rated: Next, we have another 77 rated Brazilian winger. Alanyaspor showed no mercy against newly promoted Hatayspor as they went 4-0 up before half time on their way to a 6-0 victory. Davidson scored three and set up another in the game which should make him guaranteed to feature in the next TOTW.

Marcus Harness RM - Portsmouth - 66 -> 75 Rated: Portsmouth may have reached the playoffs last season, but they have struggled at the start of this season. They got a much needed first win of the season this weekend, mostly down to winger Harness. The Pompey wide man got scored in the second minute of the match before his side went 2-1 down. A brace in the second half to complete his hattrick helped lead his side to a 4-2 victory.

Danny Grant RM - Bohemians - 60 -> 70 Rated: The Dublin derby was an entertaining one as Bohemians visited Shelbourne. Young winger Danny Grant was the main man for Bohs with his hattrick enough to see off their local rivals 3-1 as they try to keep the unbeaten Shamrock Rovers from winning their first title since 2011 in the half length 2020 season.

Ibrahima Niane ST - Metz - 70 -> 78 Rated: Metz had a difficult start to the season, losing their first three games against Monaco, Lille and PSG. However they seem to have turned that corner now with 7 points from their next 9 including this victory. Niane scored all three goals in a 3-1 victory over fellow strugglers Lorient.