Team of the Week 1 Predictions - FIFA 21

Published on by Darren8196 52 Comments Updated on 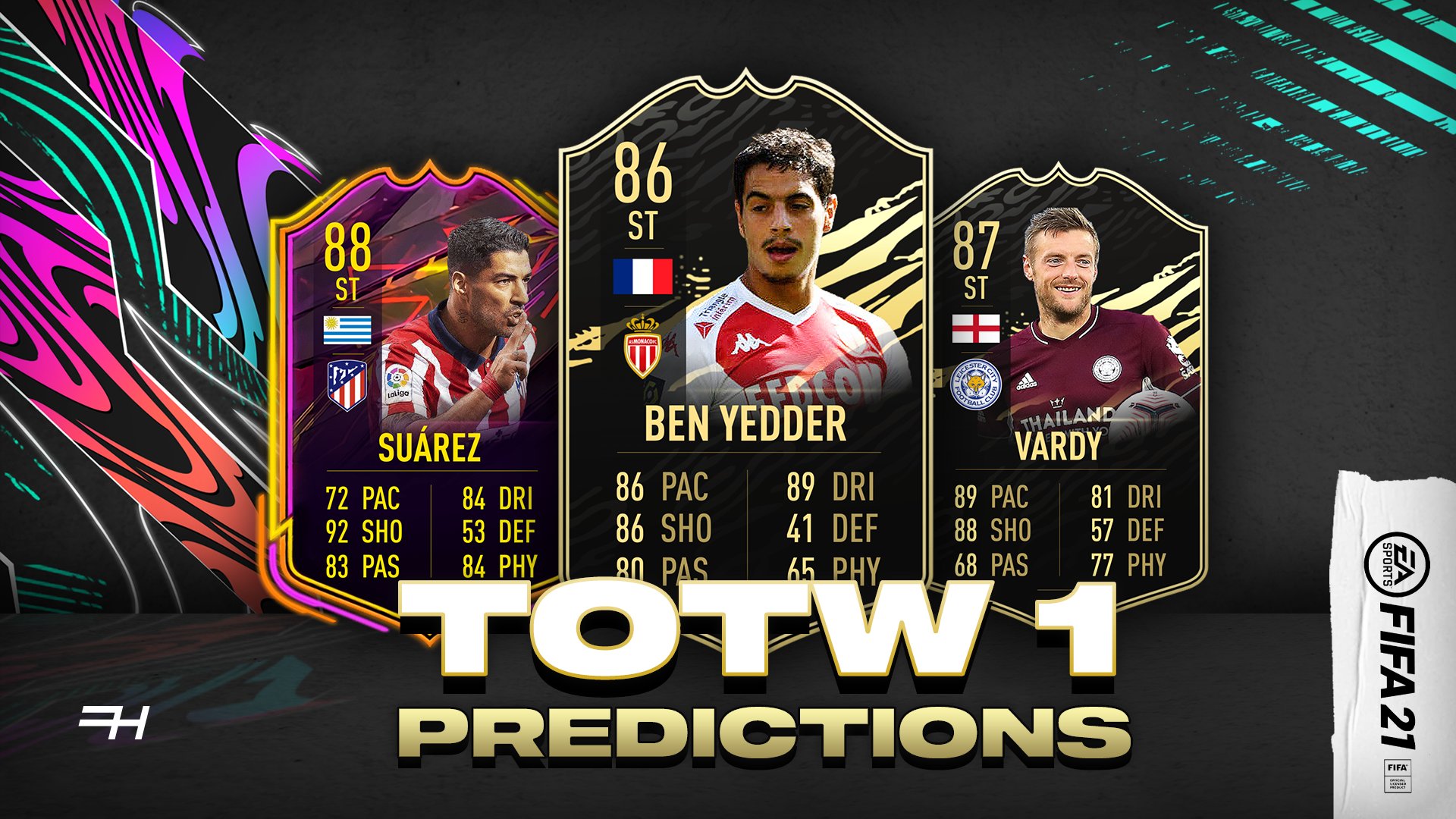 Please note that, as we are still without the full database, this prediction uses any available FIFA 21 cards and then the FIFA 20 cards of those who haven't had their new card released yet. 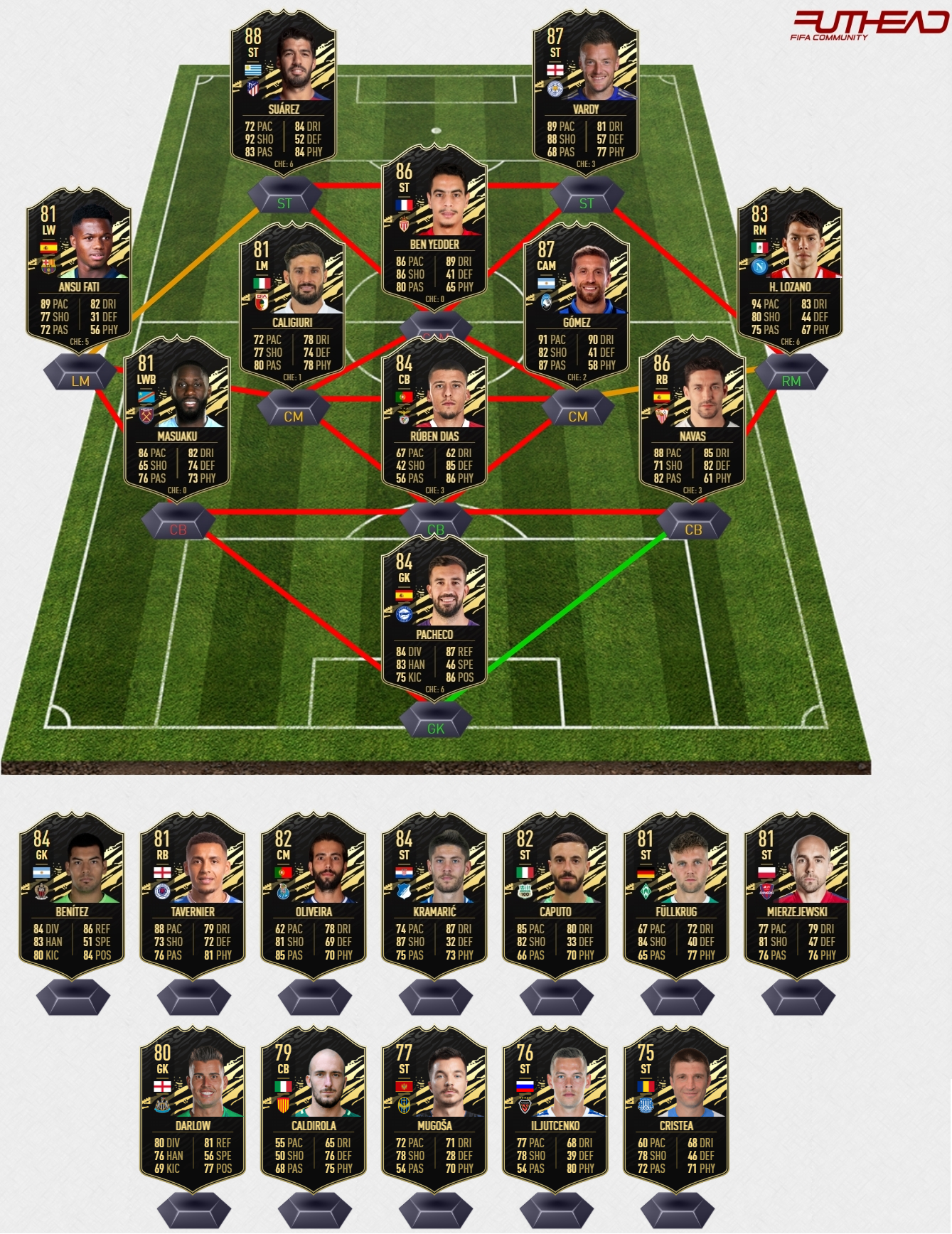 Fernando Pacheco GK - TEAM - 82 -> 84 Rated Alaves avoided relegation by just three points last season, and haven't got off to a great start this season either with successive losses. However, a strong showing against Getafe earned them their first point of the season, thanks in part to Pacheco's 4 saves to keep out their opponents and claim a first clean sheet of the season.

Jesús Navas RB - Sevilla - 84 -> 86 Rated Having transitioned to playing a deeper right back role over the last few seasons, the 34 year old has shown no signs of age catching up to him. Last season's stellar performances have carried over into this, as he assisted Sevilla's first goal of the season in a 3-1 win over newly promoted Cádiz.

Rúben Dias CB - Benfica - 81 -> 84 Rated In what may have been his final game for the side before a seemingly imminent move to Manchester City, Rúben Dias scored the opener in a comfortable 2-0 win over Moreirense to keep Benfica's 100% league record going this season.

Arthur Masuaku LWB - West Ham - 77 -> 81 Rated In a week of upset results across England, the options for Team of the Week were few and far between. One of these options is West Ham full back Masuaku, who put a perfect cross onto Haller's head to round off an excellent 4-0 win over Wolves.

Hirving Lozano RM - Napoli - 80 -> 83 Rated Having struggled to make much of an impact last season, 'Chucky' seems to have found his feet in Italy in his second year with Napoli. Two goals in a 6-0 romp of Genoa saw him pick up man of the match to help Napoli take an early lead in the Serie A table.

Papu Gómez CAM - Atalanta - 86 -> 87 Rated Another year, another In Form card for Atalanta's Argentine talisman. Having been linked with a move away from the Italian side this summer, he came back and showed how valuable he is for the side by scoring their first and setting up the next two in a 4-2 win against Torino.

Daniel Caligiuri LM - Augsburg - 77 -> 81 Rated Daniel Caligiuri loves scoring against Dortmund. The Italian winger now has five goals and four assists in his last seven appearances against 'Die Schwarzgelben'. His goal and assist helped his new side Augsburg to a shock 2-0 win over Dortmund.

Ansu Fati LW - Barcelona - 76 -> 81 Rated Barca's next wonderkid is well and truly up and running. After 7 La Liga goals last season, the 17 year old winger worked his magic again, scoring a quickfire brace against a strong Villarreal side. He later won a penalty, which Messi converted to help the Blaugranas to a 4-0 victory.

Wissam Ben Yedder ST - Monaco - 84 -> 86 Rated FIFA 20 is gone but the French striker is back to break more controllers. His two goals were enough to see Monaco through to a 3-2 win over Strasbourg, despite being reduced to 9 men for the last 20 minutes.

Jamie Vardy ST - Leicester - 86 -> 87 Rated Leicester's talisman striker was on target again, this time against Manchester City. A penalty just before half time was followed up with a quickfire brace in the second half to kill off the game as Leicester seemingly eased to a 5-2 win.

Luis Suárez ST - Atlético Madrid - 87 -> 88 Rated After signing for Atléti on Friday, 'El Pistolero' wasted no time in getting himself off the mark for his new club. A short 20 minute substitute appearance saw him set up one and then score two of his own to get his side off to a great start to the season with a 6-1 victory over Granada. And who can also pass up on a boost to potential Ones to Watch which I would predict he receives in the near future.

Walter Benítez GK - OGC Nice - 81 -> 84 Rated The Argentine goalkeeper always seems to be there or thereabouts in terms of TOTW selection, so it shouldn't come as too much of a surprise that he features this early on in the year. His 5 saves helped keep a clean sheet as Nice drew 0-0 away to Bordeaux.

James Tavernier RB - Rangers - 75 -> 81 Rated The Rangers captain led by example yet again, putting away 2 penalties to help his side to a 5-1 win. This extended their unbeaten run at the start of the season to 11 competitive games as they sit top of the Scottish Premier League.

Sérgio Oliveira CM - FC Porto - 78 -> 82 Rated Porto leapfrogged rivals Benfica to the top of the table after an excellent 5-0 win over Boavista. A brace from striker Marega and a goal and assist for Oliveira are the two standout performances, but I feel like the Portuguese international will take this spot ahead of his Malian teammate.

Andrej Kramarić ST - Hoffenheim - 82 -> 84 Rated After their extra time UEFA Super Cup victory during the week, Bayern would be expected to have some sort of hangover. Things couldn't have gone much worse as they were humbled to a 4-1 defeat to a strong Hoffenheim side who have shown that they don't fear anyone, now having put 4 goals past both Bayern and Dortmund in their last 3 league matches. Kramarić was the star yet again, following up his hattrick last week with a brace this week. With lineups saying he played both ST and LW, his position may be in doubt, but his inclusion should be certain.

Francesco Caputo ST - Sasuolo - 79 -> 82 Rated Despite having 3 goals ruled out for offside by VAR, the Sassuolo front man was still involved in three of his sides four goals. He won a penalty, assisted one and scored one of his own to help his side to victory over the newly promoted Spezia.

Niclas Füllkrug ST - Werder Bremen - 77 -> 81 Rated Schalke manager David Wagner became the first managerial casualty of the season after his side fell to their second defeat in a row away to Werder Bremen. Niclas Füllkrug was the Bremen, scoring all 3 of his sides goals in a 3-1 victory in Gelsenkirchen.

Adrian Mierzejewski ST - Chongqing Lifan - 77 -> 81 Rated In a battle of third against fifth, the Polish attacker helped guarantee his side will play in the Championship play-off group. Despite being reduced to 10 men shortly after half time, the Pole was able to finish off his hattrick late on to secure a 3-1 victory.

Karl Darlow GK - Newcastle - 73 -> 80 Rated As controversial as the late Newcastle penalty was, they have to thank Darlow for simply keeping them in the game to even be in with a chance of snatching their late point. A massive 11 saves helped keep the likes of Kane, Son and Bergwijn at bay before Callum Wilson's late penalty made it 1-1.

Luca Caldirola CB - Benevento - 72 -> 79 Rated After cruising to the Serie B title last season, not many would have predicted Benevento would get off to a winning start against the top division mainstay Sampdoria, especially after going 2-0 down inside the first 20 minutes. However, they fought back thanks to a double from captain Caldirola to level things up before a late third saw them eek out a narrow 3-2 win.

Stefan Mugoša ST - Incheon United - 69 -> 77 Rated The first of two K-League players to feature this week. In a close fought relegation playoff group, Incheon United moved off the bottom of the table thanks to their Montenegran striker. An early red card for hosts Seongnam set things up for a rout, with Mugoša scoring three and set up another to help his side to a 6-0 victory to earn valuable points and also greatly improve their goal difference.

Stanislav Iljutcenko ST - Pohang Steelers - 68 -> 76 Rated This time, we move to the Championship group in Korea, where Russian striker Iljutcenko and strike partner Palocevic were in great form. Conceding three in less than 15 minutes to go 3-2 down, Iljutcenko turned it around, completing his hattrick and also winning a penalty that Palocevic converted to come back and win 5-3.

Andrei Cristea ST - Politehnica Iași - 67 -> 75 Rated After its introduction in FIFA 20, we only saw a handful of special cards released for the Romanian league. However, it looks like we will start off FIFA 21 with an In Form in the first TOTW. The veteran striker scored a hattrick and set up one to help his team to a 5-2 win.