Published on by Aarong222 77 Comments 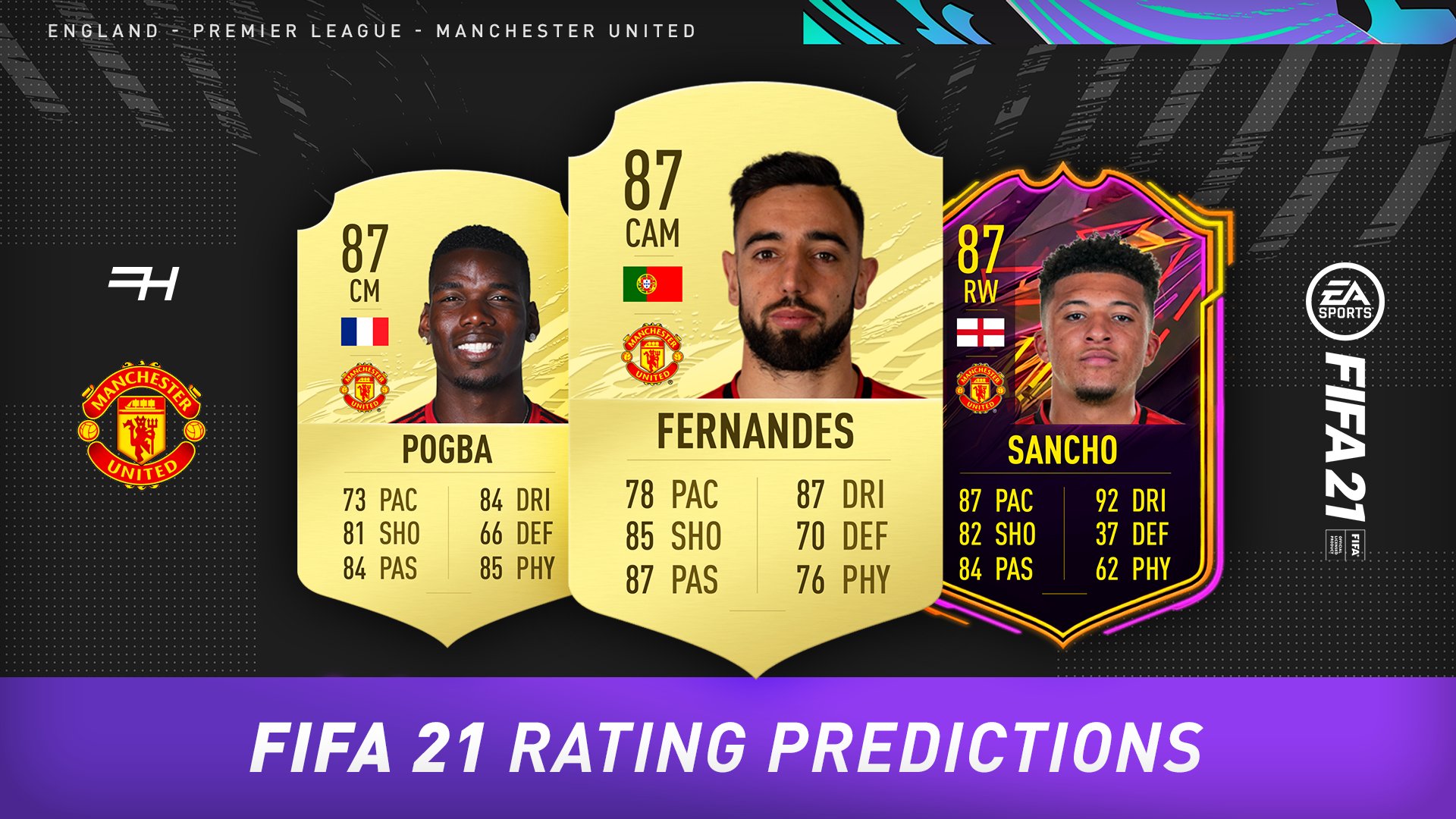 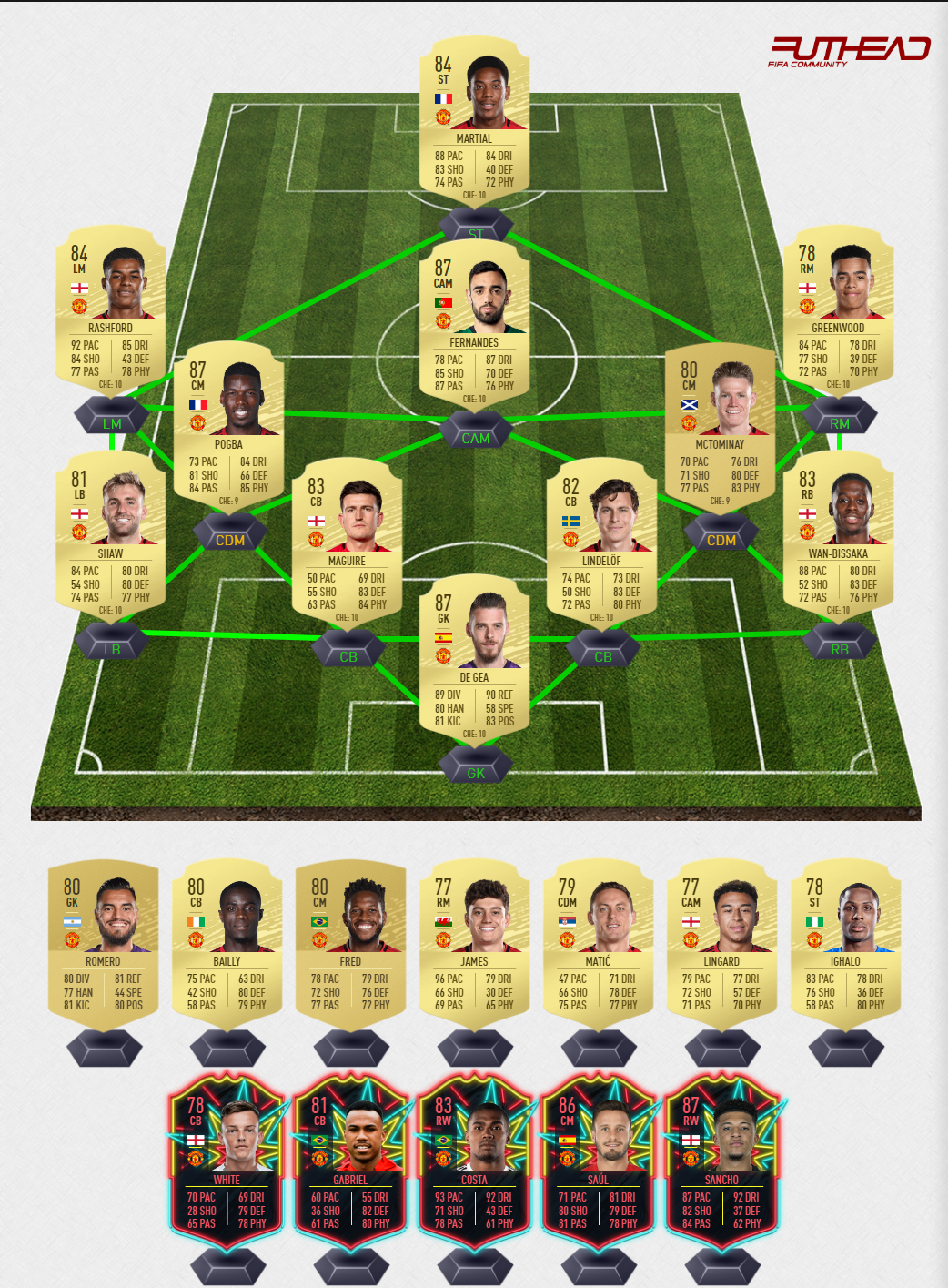 David De Gea - GK - OVR 89 -> 87 De Gea has seemingly already seen his best years with the Spaniard once again showing that he is prone to errors on a regular basis. Some days he is almost unbeatable and then others he is a liability. I highly doubt that he will maintain his high rating of 89 but the drop is also unlikely to be a dramatic one either. He is still known as one of the best keepers around and thus a drop of two seems realistic to me.

Luke Shaw - LB - OVR 81 -> 81 Shaw look destined for a downgrade with the LB playing second fiddle for large parts of the season but with a late surge in form I can see him maintaining his 81 rating instead. Its a shame that the Englishman has not really reached his potential since moving from Southampton but injury is partly to blame for that one.

Harry Maguire - CB - OVR 82 -> 83 Maguire gets a lot of stick, largely due to the amount that United paid for him and although to an extent that is fair, he is not worth the money United paid for him, he has done them a good job, making their defence more solid as a whole. EA seem to rate the United man with them giving him a spot in the Premier League TOTS and as a result I can see a small upgrade coming his way.

Victor Lindelof - CB - OVR 81 -> 82 I can also see an upgrade going to Uniteds other central defender in Lindelof. With Bailly out injured for practically the whole season it gave the Swede a chance to play on a regular basis and he has cemented his spot in the side well, perfoming week in week out. 81 was too low for him in my eyes and I would probably match Maguires 83 but 82 is the more realistic option from EA.

Aaron Wan Bissaka - RB - OVR 79 -> 83 Wan Bissaka was awarded a modest 79 rating after his high profile move from Palace to United and I feel that was due to him still being relatively unproven. Its now safe to say that he is recognised as one of the best English RB's around and I expect his new rating to reflect that. A plus 4 is a big upgrade in FIFA terms but its one I feel AWB more than deserves to get.

Marcus Rashford - LW - OVR 83 -> 84 I still view Rashford as a striker but with the majority of his games coming from the left flank last season I would expect EA to convert his base item to reflect that. Not only that but he seemed to excel in the position with an impressive 17 goals to his name during the 31 games he played. Theres potential for him to hit 85 but 84 seems right in my mind.

Bruno Fernandes - CAM - OVR 85 -> 87 Granted the Portuguese midfielder only played at United for half a season but the impact he made for the club was huge. We all knew that he came boasting an impressive record for Sporting Lisbon but the jump in level was always a big debate. Fernandes is still influencing almost every match though and as a result I expect his rating to further increase for FIFA 21.

Paul Pogba - CM - OVR 88 -> 87 There is no questioning that Pogba is a very talented player but his motivation to play is a big issue the Frenchman faces. An 88 rating puts him amongst the very best for his position, which on his day he is but with just 16 games of a possible 38 played for United this season is it justifiable to keep him at such a high rating? I dont think so and thus I can see a small downgrade coming his way.

Scott Mctominay - CM - OVR 77 -> 80 There are a lot of potential upgrades in this United squad which is largely down to the amount of players OGS has developed into the starting line up during his time at the club. Although I dont expect Mctominay to see a huge upgrade I do expect a rise after consistently performing in the middle of the park for the red devils, keeping out the likes of Matic.

Mason Greenwood - RM - OVR 67 -> 78 Greenwood practically came from nowhere, managing just three appearances in the 2018/19 season which is understandably why EA opted to rate him 67. The talented youngster excelled this year though, making himself a regular in the United setup. He recorded 10 goals during his 31 matches and with the hype around him I expect him to be amongst the biggest upgrades of the year.

Anthony Martial - ST - OVR 83 -> 84 Martial was given the consistent gametime he needs in order to shine for United this season, with the Frenchman regularly leading the line for them. He managed 17 league goals for them as a result, a tally which wasn't far behind the golden boot winner. A nice positional change should go alongside a small rating increase for Martial this year.

Sergio Romero - GK - OVR 80 -> 80 There have been multiple calls for Romero to start ahead of De Gea, especially towards the end of the year which is more on De Gea than Romero in truth. The Argentine has looked strong when given the chance though but in reality he is always going to be Uniteds back up keeper. The 80 rating seems a fair one here.

Eric Bailly - CB - OVR 80 -> 80 Bailly is a difficult one with injury practically ruining his whole season. The Ivorian is more than capable of playing at this level though and with his age approaching what would be his prime years I can't see his rating dropping. That being said its only going to go one way if it does move and thus I am sticking with 80 which I feel is fair for him right now.

Fred - CM - OVR 79 -> 80 Another central midfielder who performed well for United this past season is Fred. He saw a mins 3 from the previous season after struggling to adapt to life in England but his second season was of a much higher quality and due to that I expect to see him regain one of those ratings which he lost.

Nemanja Matic - CM - OVR 81 -> 79 Matic is nothing in comparison to the player he was a few seasons back. He continues to fail to impress for United and as a result has found gametime hard to come by. His huge rating drop will likely be remembered, going from 86 to 81 for FIFA 20 and another downgrade looks imminent for the Serbian, who really needs to leave Manchester in truth.

Jese Lingard - CAM - OVR 82 -> 77 Lingard gets a lot of criticsm and in truth a lot of it is deserved. He failed to impress once again and I would expect his future at the club to be minimal. A rating of 82 is far too high for him and I am perhaps being lenient with him at 77. No matter what EA decide he will be getting a hefty downgrade though.

Daniel James - RM - OVR 77 -> 77 There were some promising early signs for James at United but as the season went on his performances seemingly got worse and worse, ending on just three goals for the season. He is still young and will likely develop at the club but as for his current rating I highly doubt we will see an increase on 77. The only thing keeping him that high is the fact he has the ability to develop.

Odion Ighalo - ST - OVR 77 -> 78 Questions were initially asked about the signing of Ighalo for United which all seemed rather random at the time. The Nigerian has proven to be an asset for the club though giving them the additional depth and scoring a few important goals in the process. He is approaching the end of his career and although there is not going to be much movement on him I do feel he has done enough for a plus 1.

Ben White - CB - OVR 68 -> 78 One of two CB's which United have been linked with in the past couple of weeks is Brightons Ben White. The young English defender spent the past season on loan with Leeds and excelled, helping them to promotion in the process. There is a hefty 50 million price tag placed on him but he would be a purchase which could last United a long time.

Gabriel - CB - OVR 76 -> 81 Gabriel was magnificent for Lille last season, earning himself a spot in their TOTSSF. Lille have reportedly admitted that they are likely to lose the Brazilian over the summer with several clubs looking at him. Arsenal, Manchester united and Napoli look to be those most linked with him and with United's defence needing some additional strength Gabriel could be a good choice here.

Douglas Costa - RW - OVR 84 -> 83 Should United fail to sign Sancho an alternative option is that of Douglas Costa. Granted it would be a less attractive move but it would also be significantly cheaper for them. The tricky Brazilian has not exactly excelled this past season for Juventus though managing just one goal and five assists from the 23 league games he has played.

Saul - CM - OVR 85 -> 86 Saul has been with Atletico Madrid for five seasons now which have seen him grow from a 74 rated silver to an 85 rated gold in terms of FIFA. United are reportedly now interested in signing the Spaniard as one of a few big signings they are looking to make. I can easily see Saul gaining another rating for the new year, especially should he make a high profile move like this one

Jadon Sancho - RW - OVR 84 -> 87 Its crazy to think that Sancho is still only 20 years of age but the Englishman is one of the greatest prospects in the current game and after recording both 17 goals and 17 assists this year for Dortmund its no surprise that a surplus of clubs are chasing his signature. Man United are the frontrunners and although its possible that he will stay with Dortmund for another season theres still a chance that united can clinch a deal.