FIFA 20 Team of the Week 42 Predictions

Published on by Aarong222 28 Comments 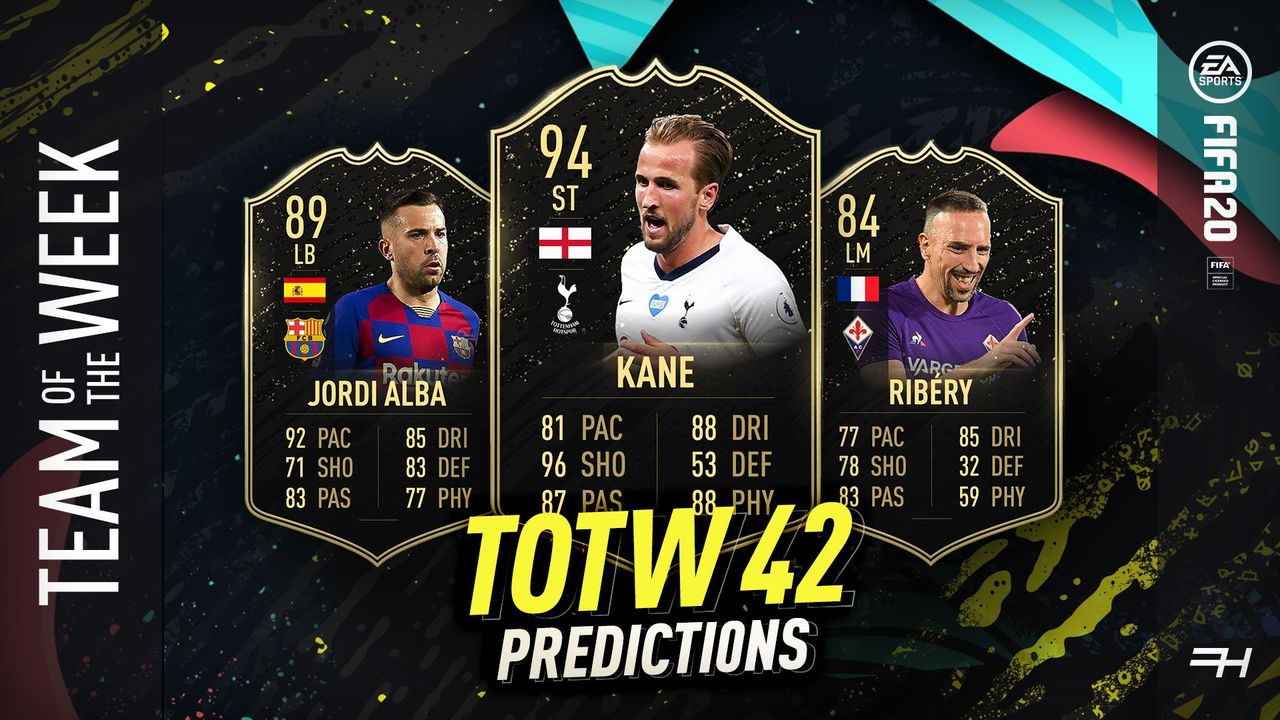 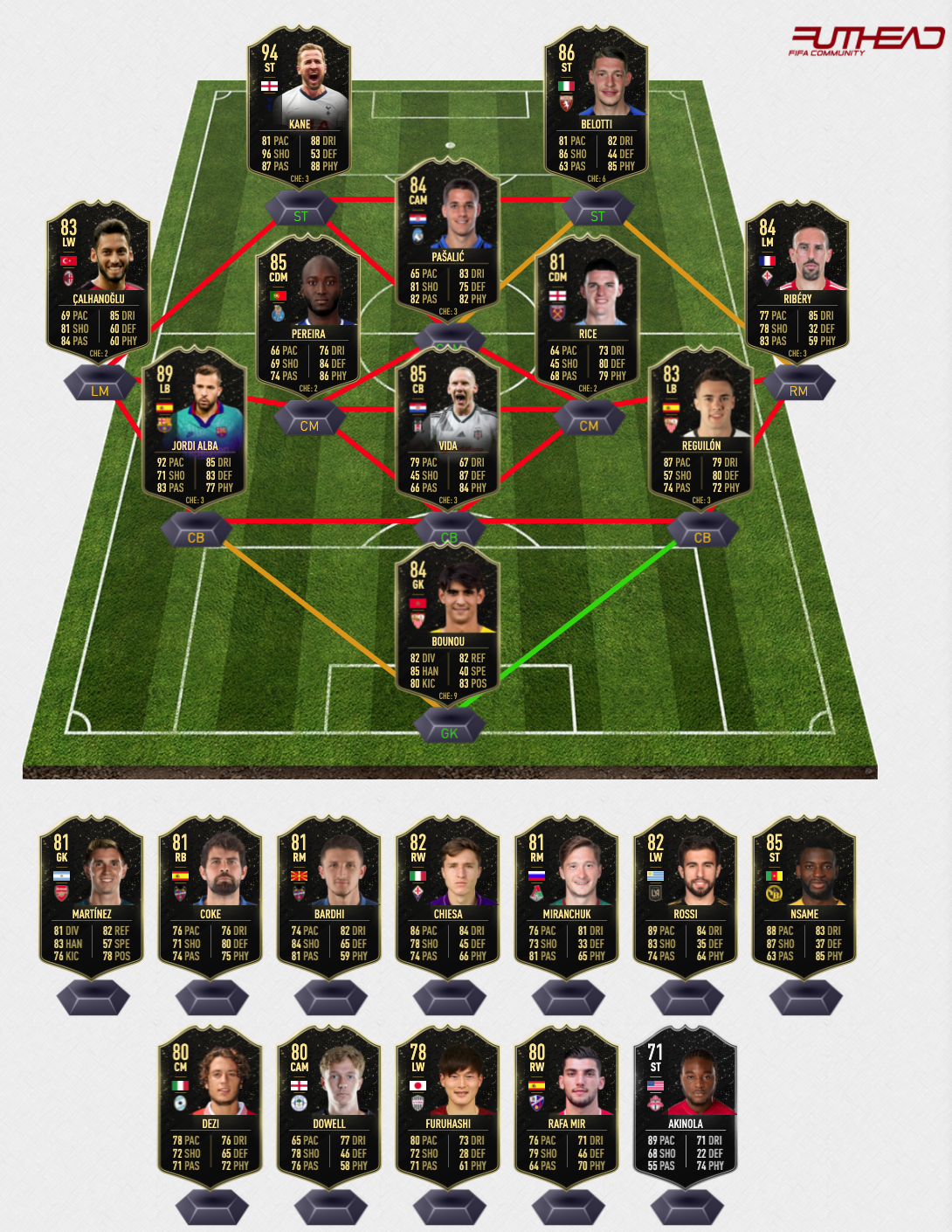 Yassine Bounou - GK - OVR 77 The keeper decision was almost impossible this week and I seriously struggled to even select one. Bounou makes my side for a Tuesday performance from which he made four saves in a 0-0 draw if that doesn't show how difficult this was im not sure what will.

Jordi Alba - LB - OVR 87 Barcelona may have let the title slip due to recent poor results but they didn't let them distract them when travelling to Deportivo on Sunday. The Spanish giants put five past the hosts without reply. Alba providing the assists on two of those five goals and although it was Messi with all the headlines as par usual I would expect Alba to be the player making TOTW.

Domagoj Vida - CB - OVR 80 Both Besiktas goals in their 2-0 win over Fenebache came from defenders with Vida scoring one and Gonul getting the other. Either of these players could be making TOTW but I do expect one of them to feature regardless of who it is, I am leaning towards Vida myself with him being the better option of FIFA and one of the only central defenders to stand out.

Reguilon - LB - OVR 80 The vast majority of defensive options seemed to come from La Liga this week. Another comes with Reguilon who managed to score the only goal of the game as Sevilla recorded a 1-0 win at home to Valenica, ending his superb season on a high.

Hakan Calhanoglu - LM - OVR 80 Ac Milan and Calhanoglu played twice this week and the Turkish midfielder could actually get in from either of those games. Firstly with a goal and two assists from LM and then a goal and an assist from CAM during the weekend set of games. EA could opt for either position but he should be making the side regardless.

Danilo Pereira - CDM- OVR 83 Porto officially won the league yet again after recording a 2-0 win over Sporting Lisbon. putting a 8 point gap between them and Benfica with two games remaining. Danilo Pereira claimed MOTM from the title deciding match after scoring one of their two goals with Abola awarding him an 8/10.

Mario Pasalic - CAM - OVR 77 Freescoring Atlanta managed another six on their impressive tally on Tuesday, via a 6-2 home win over Brescia. A couple of candidates for TOTW appeared from it with both Palasic and Malinovskyi standing out. Although the Ukrainian was actually named MOTM I simply can't overlook a hat trick and thus Palasic makes the cut for me.

Franck Ribery - LM - OVR 82 Although in terms of usability Ribery is nowhere near the level he once was, I would still classify him as a big name when it comes to these sides. He played a big role in Fiorentina's 2-0 home win over Torino, assisting one alongside causing the own goal. Gazzetta awarded his efforts with an 8/10 which usually sees players make TOTW.

Harry Kane - ST - OVR 89 Kane has been relatively quiet as of late but he did what he does best on Wednesday which is scoring goals, managing two of them. They came as Spurs recorded a 3-1 away win over Newcastle as they battle it out with Wolves for a European spot.

Andreas Belotti - ST - OVR 82 I have been stung a couple of times on strikers with one goal and one assist to their names in recent weeks but despite that I am willing to go with Belotti. The Torino striker claimed player of the gameweek in Italy with a goal and assist in Torino's 3-0 win over Genoa.

Declan Rice - CDM - OVR 78 I seriously struggled when it came to Premier League options this week with only a few managing to stand out. Especially with multiple players being ruled out. As a result I fully expect a couple of inclusions to be somewhat unworthy so to speak. Rice is one of my punts after he scored a fantastic goal during West Ham's 3-0 win to continue their good form.

Emiliano Martinez - GK - OVR 75 After an unfortunate injury to Arsenals first choice keeper in Leno, Martinez was given the opportunity to step up and its one hes taken well. The Argentine has seriously impressed since Lenos injury and actually went on to claim MOTM for them in a 2-1 win over Liverpool after he made a total of eight saves.

Coke - RB - OVR 78 It looked as though Levante v Getafe was heading towards a 0-0 draw on the final day of the season, that was until the 98th minute from which Coke popped up with a late winner. With only a few gold defensive options I can't see Coke missing out on a spot in this side.

Enis Bardhi - RM - OVR 78 Levante ended their season strongly with back to back wins being recorded. The first of those two wins came via an impressive 3-2 away win over Celta Vigo. Bardhi scored two of those goals making him a strong candidate for TOTW. That being said there are a lot of La Liga options and this theres a chance he could narrowly miss out.

Federico Chiesa - RW - OVR 79 Chiesa broke onto the scene in Italy last season and has since developed into one of Fiorentina's main player. THe Italian winger has a lot of talent and could easily make it to the very top of the game. He recorded both a goal and an assist during Fiorentina's 3-1 away over Leece which saw Gazzetta award him MOTM with a 7.5 match rating.

Alexey Miranchuk - RM - OVR 78 Miranchuk has been unfortunate not to have received an IF or two already but once again the Russian has a chance to pick up his first. That is after he scored twice in a 2-1 win over CSKA for Lokomotiv. Championat went on to award him MOTM with an 8/10 and with it being such a big fixture he really should be making to cut here.

Diego Rossi - LW - OVR 73 Los Angeles FC hosted LA Galaxy and its a game to forget for the away side with Los Angeles running away as 6-2 winners. Rossi scored four of those six goals and unlike many other TOTSSF items is not actually currently in packs and ths can get the nod for this side instead.

Jean Pierre Nsame - ST - OVR 74 Nsame continues his superb form with another three goals during a 5-0 win for Young Boys over Zurich. The goals take his tally to 28 in 28 for the season, putting Nsame in line for a third IF of the season.

Kyogo Furuhasi - LW - OVR 68 Hat tricks were few and far between this week and thus we drop to the next best thing, which history can tell is two goals and one assist when it comes to TOTW. Furuhasi is one of the only players to manage it and thus I would expect to see him making TOTW 42.

Jacopo Dezi - CM - OVR 71 The final weeks of the Italian second division often sees low scoring encounters but that wasn't the case in the majority of matches this weekend. Virtus Entella actually played out a six goal thriller with four going the way of the away side. Dezi was involved in three of those, scoring two himself alongside also picking up an assist.

Kieran Dowell - CAM - OVR 70 Onto another option coming from the Tuesday set of fixtures now with Dowell scoring three goals and assisting another in a Wigan 8-0 hammering of struggling Hull City. A match which saw five goals in thirteen minutes at the end of the first half. As you can probably imagine there are several options for this side but none are better than that of Dowell.

Rafa Mir - RW - OVR 71 Huesca continued their chase on Cadiz with a 3-0 home win which alongside the league leaders losing for the second consecutive match leads up to a dramatic final day of the season. Rafa Mir was heavily influential in their penultimate match, scoring twice and assisting another.

Ayo Akinola - ST - OVR 61 There haven't been many usable silver IF's during this FIFA but it looks as though one could be on the way. That is after Akinola managed a hat trick in Toronto's seven goal thriller with Montreal, with Akinola finishing his hat trick and ultimately giving Toronto the win in the 83rd minute.