FIFA 20 Team of the Week 41 Predictions

Published on by Aarong222 19 Comments Updated on 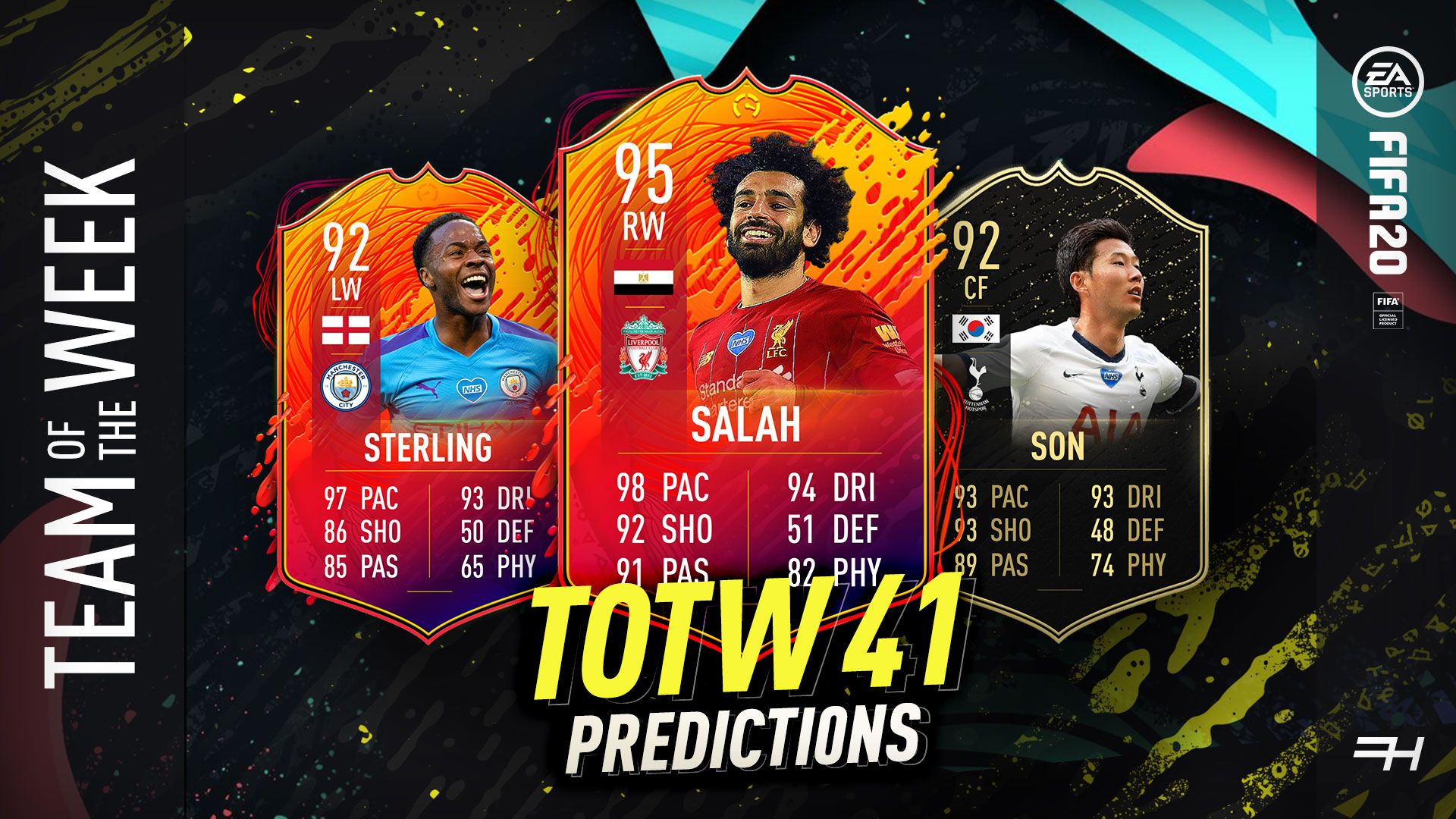 Nick Pope - GK - OVR 79 The Burnley keeper always seems to excel but Pope is simply on another level. The Englishman continues to make his claim for the England number one, putting in top end performances week in week out. Pope managed to claim MOTM in both matches he played this week firstly making four saves in a 1-0 win before then making eight saves in a 1-1 draw with Liverpool. His performances have been noticed and I fully expect a big move in the summer for him.

Rafael Toloi - CB - OVR 78 With top leagues now coming towards the end of their domestic seasons the requirements for these sides often drop, especially on the defensive side of things. Therefore a goal and a clean sheet for Toloi should be enough to see him included despite only getting a 7 from Gazzetta.

John Egan - CB - OVR 77 Its rare that you will see a defender nominated for TOTW for two consecutive weeks but John Egan looks a completely different player since coming back from suspension and in turn is helping Sheffield United for a serious European push. The Irish defender scored a last minute winner to see off fellow contenders Wolves with a 1-0 win. They then went on to beat Chelsea 3-0 but I feel as though Egan is still the best option from United this week.

Federico Fazio - CB - OVR 80 Another punt on a Serie A defender with Fazio. It comes under similar circumstances with a goal and a clean sheet for the Argentine however he also failed to pick up the MOTM award. That being said I can still see him featuring as EA are also likely to struggle when it comes to defensive options.

Raheem Sterling - LW - OVR 88 It seems an eternity since we saw Sterling banging goals week in week out but one thing that never left the English winger was his ability. When in form Sterling is capable of causing some serious damage to sides, influencing results almost every week. His latest performance was one of his best this season, seeing him score three times in a 5-0 win over Brighton.

Ever Banega - CM - OVR 83 La Liga was not the most eventful league in the world this week with many matches being low scoring affairs. One easy choice from the round of fixtures though is Ever Banega. The Argentine was involved in both Sevilla goals, managing both a goal and an assist in their 2-1 win over Bilbao.

Rodrigo De Paul - CM - OVR 78 The midweek set of fixtures in Italy offered very little in terms of options. As a result it meant that De Paul was able to pick up player of the gameweek for his goal in Udinese's 3-0 away win over Spal with a 7.5. Its a rating which could see him sneak in despite only scoring one goal on paper

Mohamed Salah - RW - OVR 90 This week is rather slim in terms of big name options and thus I feel as though EA could force in a big name of two in order to increase pack sales. With Salah having a headliner item it gives an additional incentive too. The Egyptian scored twice in their midweek fixture but even with that I am still forcing him in here.

Heung Min Son - CF - OVR 87 It was always likely that we were going to see an IF from the North London derby and with Spurs recording a 2-1 win they are almost guaranteed to feature in this weeks side. Both Son and Alderwiereld have a chance of making the side but ith BBC awarding the official MOTM the way of the Korean I feel as though he will be the one to make it.

Michail Antonio - ST - OVR 78 I still feel that Antonio was unfortunate not to pick up an IF last week but it turns out that his inclusion was simply delayed by a week. The West Ham man has excelled in recent weeks but this performance tops them all with all four of West Hams goals going the way of Antonio.

Francesco Caputo - ST - OVR 75 Im not certain that Caputo played in a ST role after being subbed on for the RM position but it would make sense if he did. Either way I can see him featuring in this weeks side after scoring once and assisting another in order to cause an upset to Lazio with Sassulol coming away with a 2-1 win. Caputo was awarded a 7.5 from Gazzetta which was one of the highest of the round in Italy.

Ivan Cuellar- GK - OVR 77 Leganes managed to scrape their way to a 1-0 home win over Valencia in what was a snatch and grab job from them. Leganes were reduced to ten men in the 54th minute but their keeper, Cuellar was outstanding throughout to keep his clean sheet in tact. Making a total of five saves which includes a saved penalty from a Parejo spot kick. He was awarded MOTM as they went on to win via a last minute penalty of their own.

Ruben Pena - RB - OVR 79 This game entered the headlines for all the wrong reasons with a brawl kicking off at the end of the game which saw four players being sent off. Ignoring that and we have a 3-1 Villarreal win with both Pena and Cazorla making a claim for TOTW. I feel as though Pena is the better choice though with position spread being needed.

Edu Exposito - CM - OVR 76 Eibar picked up a vital three points which now ensures that they will play in La Liga again next season. It came via a 2-0 win away at Espanyol with Exposito scoring both those goals from the middle of the park.

Trezeguet - RW - OVR 77 Aston Villa ave themselves a fighting chance of surviving the drop with a crucial 2-0 home win over Crystal Palace. Trezeguet was the hero for them, scoring both their goals from the wing.

Nani - LM - OVR 80 When taking into account that there are limited divisions still playing the fact that the MLS returned this week should go in Nani's favour for the selection process this week. The MLS has a large following and with Nani being a familiar name worldwide I feel that he will make the cut. The Portuguese winger scored once and assisted another during Orlando's 2-1 win.

Troy Deeney - ST - OVR 78 The relegation battle in England is in full flow but Watford's three points when facing Newcastle this week could well have decided their future for next season. Deeney scored both the goals, helping the Hornets significently in their 2-1 win.

Paulinho - ST - OVR 77 Althiough Paulinho has been scoring on a regular basis all season he is actually still without an IF. He should finally be set to pick one up though after scoring three and assisting another for Braga in their 5-1 away win over Pacos.

Casper Hjer Nielsen - LB - OVR 64 The first of three, yes three players from the Danish league to make my prediction this week is Nielsen. The LB was heavily involved in Aarhus's impressive 3-0 win at home to league champions, Midtjylland. Scoring once and assisting another. Three from the Danish league is a ridiculous thing to happen with even two being unlikely but all three deserve a spot and with very few options I feel that its not impossible.

Vito Hammershj Mistrafi - CM - OVR 64 Not the most enoyable of names to be typing but Mistrafi's performance is worthy of mentioning with the Danish CM scoring all three of Randers goals in their relegation play off match against Esbjerg FC. There are a few questions surrounding the match due to it being a relegation play off match but in the past if both sides have been in the same division the match has gone on to count.

Pal Andre Helland - RW - OVR 70 Helland came off the bench and changed the game in style for Rosenborg. The Winger was superb as shown by his huge 9 match rating from VG. He managed to pick that up for a goal and two assists in a 3-0 win over Stromsgodset and although another winger in Norway picked up two goals and an assist due to the higher match rating I can see it going the way of Helland.

Mikael Uhre - ST - OVR 66 Another play off match now but the huge difference is the fact it is a championship play off match rather than a relegation. Due to that I am very confident that we will see Uhre included on Wednesday, once again the reson is a hat trick with him scoring three of four goals for Brondby in their 4-0 home win.

Dominic Solanke - ST - OVR 70 Most the sides near the bottom of the Premier League table managed to pull off impressive wins this week. One of those being Bournemouth who recorded a 4-1 win over Leicester City, who continue to slump after the return of football. Solanke is not a name you see on a scoresheet very often, despite being a striker but he found himself scoring twice this week and thus he stands a chance in TOTW.