FIFA 20 Team of the Week 40 Predictions

Published on by Aarong222 40 Comments 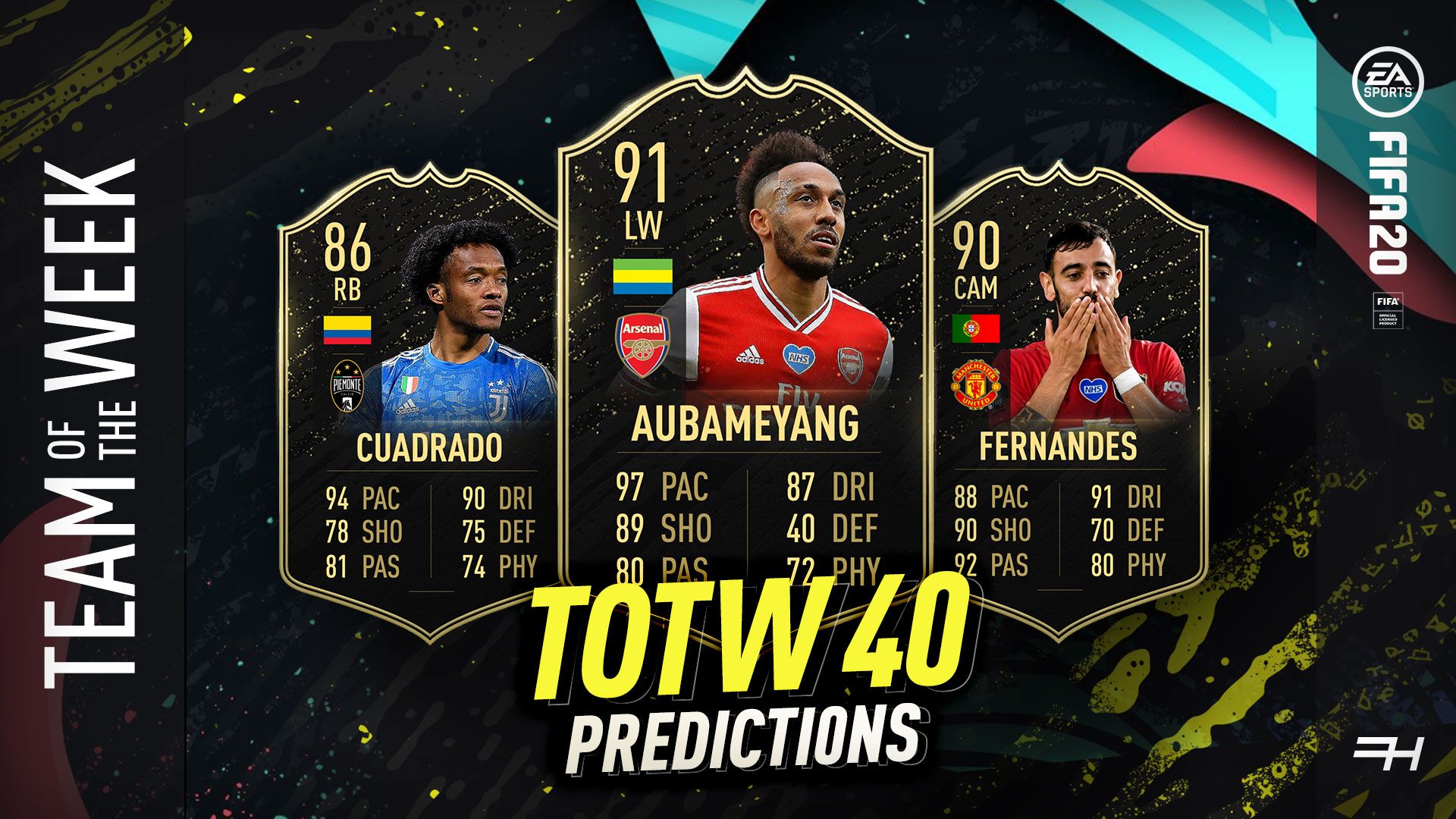 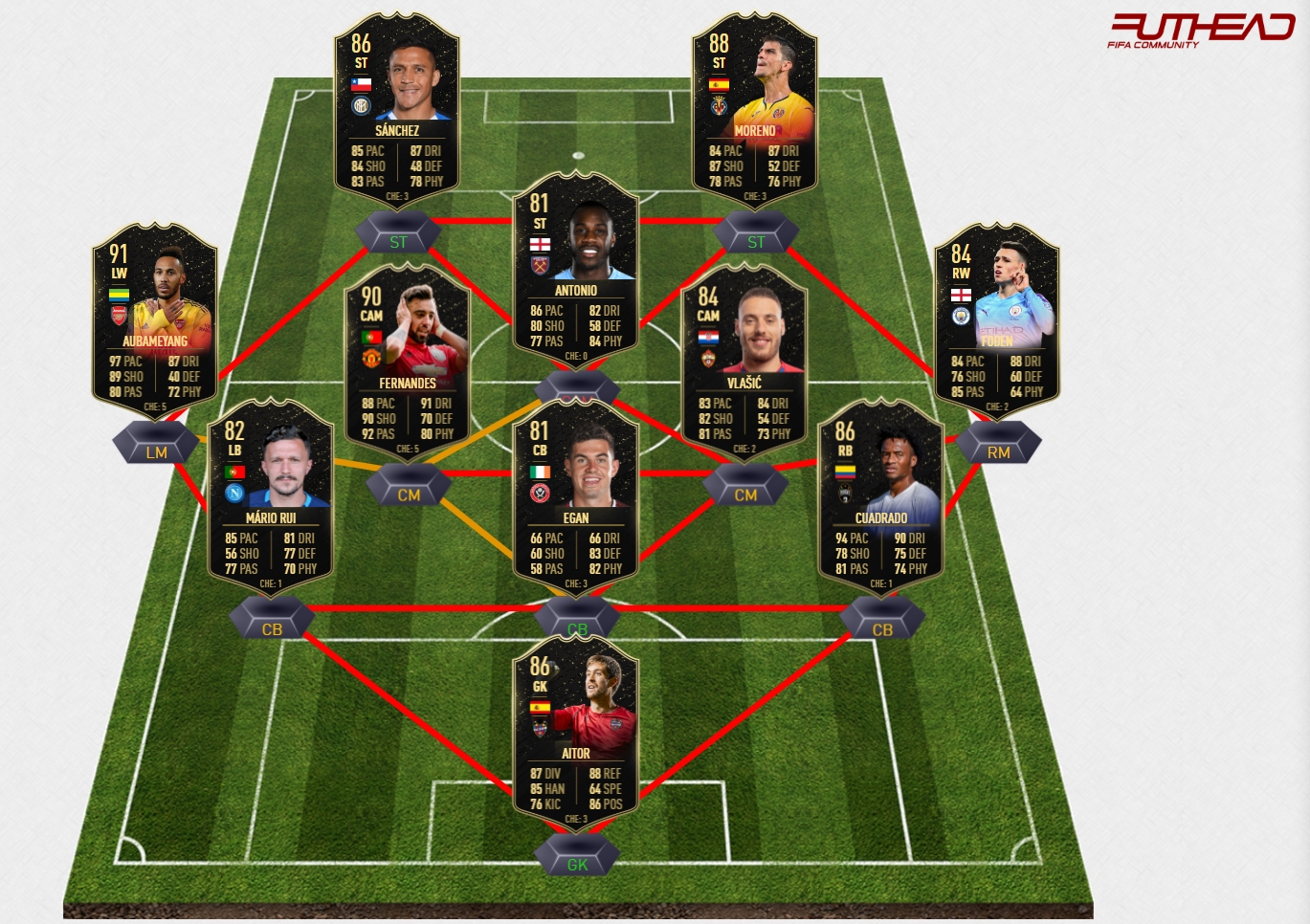 Aitor - GK - OVR 79 On paper this match looked like a dead game with Valladolid drawing 0-0 with Levante but it could have been a different story had it not have been for Aitor being between the sticks. The Spaniard made a total of five saves with one of them being a penalty to help ensure that Levante came away with at least a point.

Mario Rui - LB - OVR 79 This one is a punt due to the lack of options, especially considering that Rui only picked up a 7 match rating for his performance. The big factor here though is that he was the official MOTM in Napoli's 2-1 win over Roma. He picked up an assist in the performance in with it being a high profile game I feel as though he could sneak in.

John Egan - CB - OVR 77 John Egan had a rough time, getting sent off for Sheffield United just a couple of weeks ago before Sheffield United went on to get hammered but he has redeemed himself here. The defender scored a late goal to level the score with Burnley allowing United to come away with a point.

Juan Cuadrado - RB - OVR 83 With Dybala seemingly unavailable for this side due to summer heat it leaves the door open for the next best option in Cuadrado. Despite a poor match rating for the Colombian with both a goal and an assist going his way I find him difficult to ignore with defenders being few and far between this week.

Pierre Emerick Aubameyang - LW - OVR 88 One of the bigger names to make this weeks edition is likely to be Aubameyang. The Gabon international was pivotal during Arsenal's 4-0 win over Norwich, scoring twice and assisting another from the wing. There has been a lot of debate about his future at the squad but with performances like this one Arsenal would be crazy to let him go.

Nikola Vlasic - CAM - OVR 77 The Russian division often gets snubbed for TOTW which is annoying to then predict as the inclusions are after very random. That being said Vlasic really should make the cut with CSKA playing against Spartak. The Croatian midfielder scored both CSKA goals in their 2-0 home win.

Bruno Fernandes - CAM- OVR 85 Since the resumption of the division Manchester United have looked a different side with the football they have played being superb. Fernandes has been a large part of that and his two goals during their 3-0 win over Brighton should be enough for him to then make the TOTW on Wednesday.

Phil Foden - RM - OVR 76 Foden was snubbed simply for being a Monday fixture a couple of weeks ago but the youngster is quickly developing into one of the best talents in the division, performing week in week out for City in recent weeks. Granted Liverpool had already won the title but Manchester City put out a massive statement beating the champions 4-0. Foden was a large part in the performance once again, scoring once and assisting another. With KDB claiming MOTM it does come at a risk but with the Belgian recently included in TOTW I feel that Foden is the frontrunner

Gerard Moreno- ST - OVR 81 Looking at the past couple of TOTW sides the only players that can seemingly get included from the summer heat promo is those which have an IF in there. Under this logic I can see Moreno getting the nod on Wednesday, the forward also has an headliner which will make him more attractive to EA. He scored twice for Villarreal in a 2-0 win over Betis on Wednesday.

Alexis Sanchez - ST - OVR 82 Inter ran away 6-0 winners when hosting Brescia on Wednesday and several of their players have notable performances but with Alexis Sanchez picking up MOTM from Gazzetta with an 8/10 which actually saw him awarded POTW it only makes sense for him to be the player I then include. The Chilian scored once and assisted another two from a ST role.

Michail Antonio - ST - OVR 78 There were multiple other options for this position with two goals but I decided to take the punt on Antonio in the end with the striker scoring once and assisting another in a huge 3-2 win over Chelsea for West Ham. The Hammers had found themselves in a serious relegation battle due to recent results and thus this was a huge three points for them and could seriously help them in the long run.

Lukasz Skorupski - GK - OVR 76 Surprisingly I actually got both keepers correct last week despite seriously struggling for options. The same applies this week with only a couple of options available. That being said Skorupski is a strong option with the keeper making a total of five saves, which included a penalty as Bologna shocked Inter Milan with a 2-1 win.

Andre Ramalho - CB - OVR 75 Usually I would question this match but after recent inclusions from Salzburg I can't see a reason as to why I should. Ramalho being a gold item has helped massively here too. The Brazilian scored one of their three goals alongside helping to keep a clean sheet in their 3-0 home win.

Oliver Torres - CM - OVR 78 Sevilla recorded an important 3-0 win away at Leganes in their race to secure top four on Tuesday. Torres scored two of their three goals to claim MOTM which should be more than enough for an inclusion with so many players unavailable once again due to the latest promo.

Raul Garcia - CAM - OVR 80 Another from La Liga now as Raul Garcia managed to bag himself a brace, helping Bilbao to an impressive 2-0 win away at Valencia. A result which gives them an outside chance of snatching a European position come the end of the season.

Karol Linetty - CAM - OVR 77 There was an influx of lower rated CM options this week and although it is unlikely that all of them make the cut it was difficult to select between them. Linetty is another 50/50 option with the midfielder scoring twice in Sampdoria's 3-0 home win over Spal.

Said Benrahma - LW - OVR 74 Since making the move over to England to play for Brentford Benrahma has excelled and is now regarded as one of the best players in the division. The Algerian added to his tally this weekend, scoring all three of Brentfords goals in their 3-0 win over Wigan

Junior Negao - ST - OVR 69 There were a lot of reserve options this week for TOTW so the fact that Negao already has a gold item works wonders for his chances. The Brazilian makes my side after scoring three goals for Ulsan during their 4-1 home win over Incheon.

Mike Wunderlich - CAM - OVR 66 Wunderlich managed to claim Bundes 3 POTW from the midweek set of fixtures for his magnificent performance. He managed to both score twice and assist another two during Viktoria Koln's 5-1 home win.

Yakou Meite - RM - OVR 69 A second player from the Championship is a rare thing but with several top end performances in the divison it could have easily been more. I cant see either of the two selected being snubbed though especially Meite who managed to score four times for Reading during their 5-0 win over Luton.

Philipp Hosiner - ST - OVR 66 A second from Bundes 3 is not something I would often predict but with no other German football being played now alongside the fact that the reserves was not as tight as usual I am happy to go with two this week. Hosiner is the second with the striker scoring three goals for Chemnitzer during their 4-2 home win.

Kasper Junker - ST - OVR 63 Junker was snubbed recently for a hat trick but that was down to not being MOTM. The Danish striker managed to score another three this weekend though with the big difference being that he claimed MOTM additionally. Bodo went on to win 5-0 and with Junker picking up a 9/10 he should be making his way into TOTW.

Simy - ST - OVR 72 Benevento have been superb defensively this season but that didn't stop Simy who managed to bag himself a hat trick past a defence which had previously conceded just 15 goals in 31 matches. It was a big result for second placed Crotone in their battle for automatic promotion to the top division.