Published on by Aarong222 26 Comments Updated on 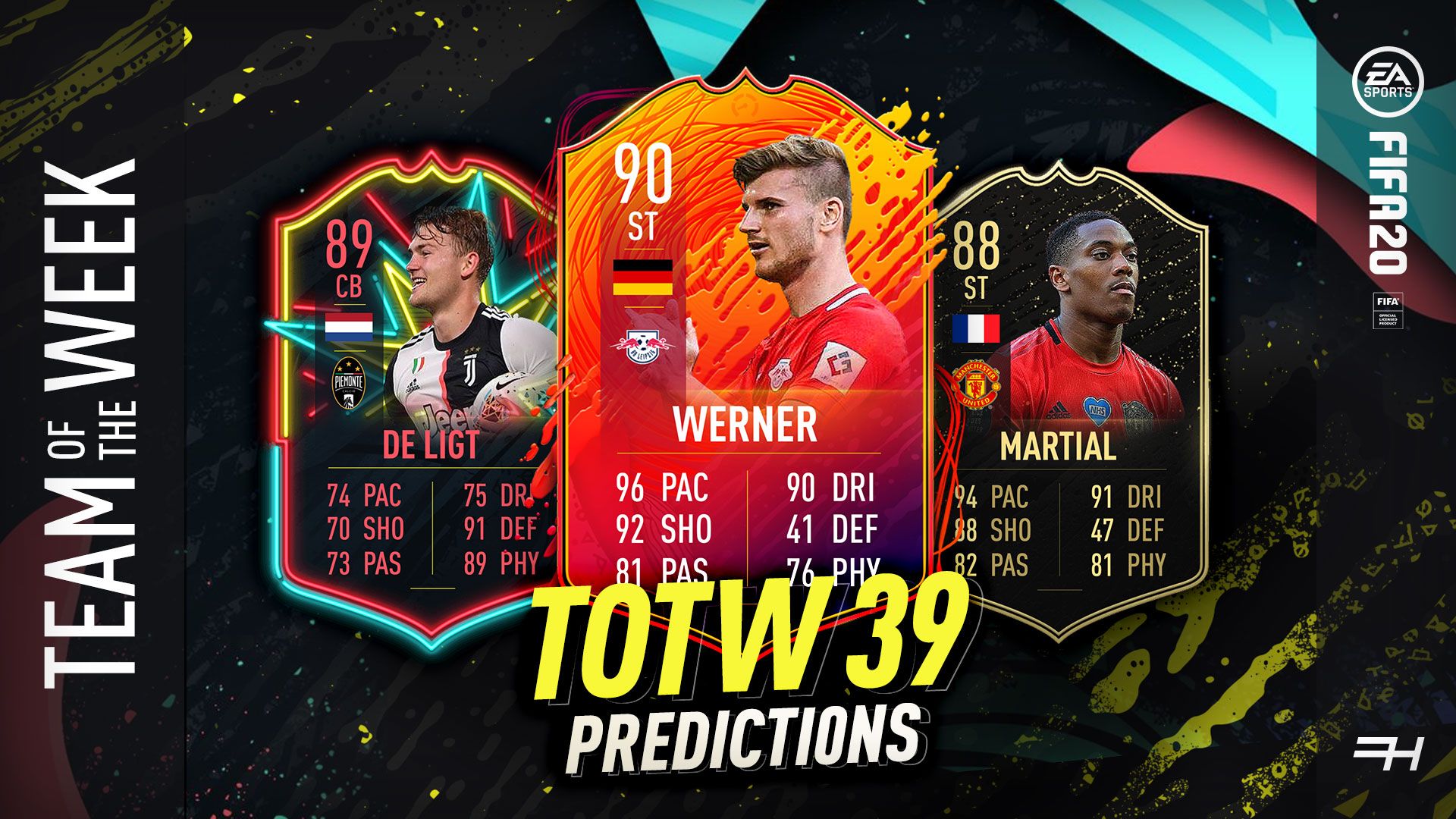 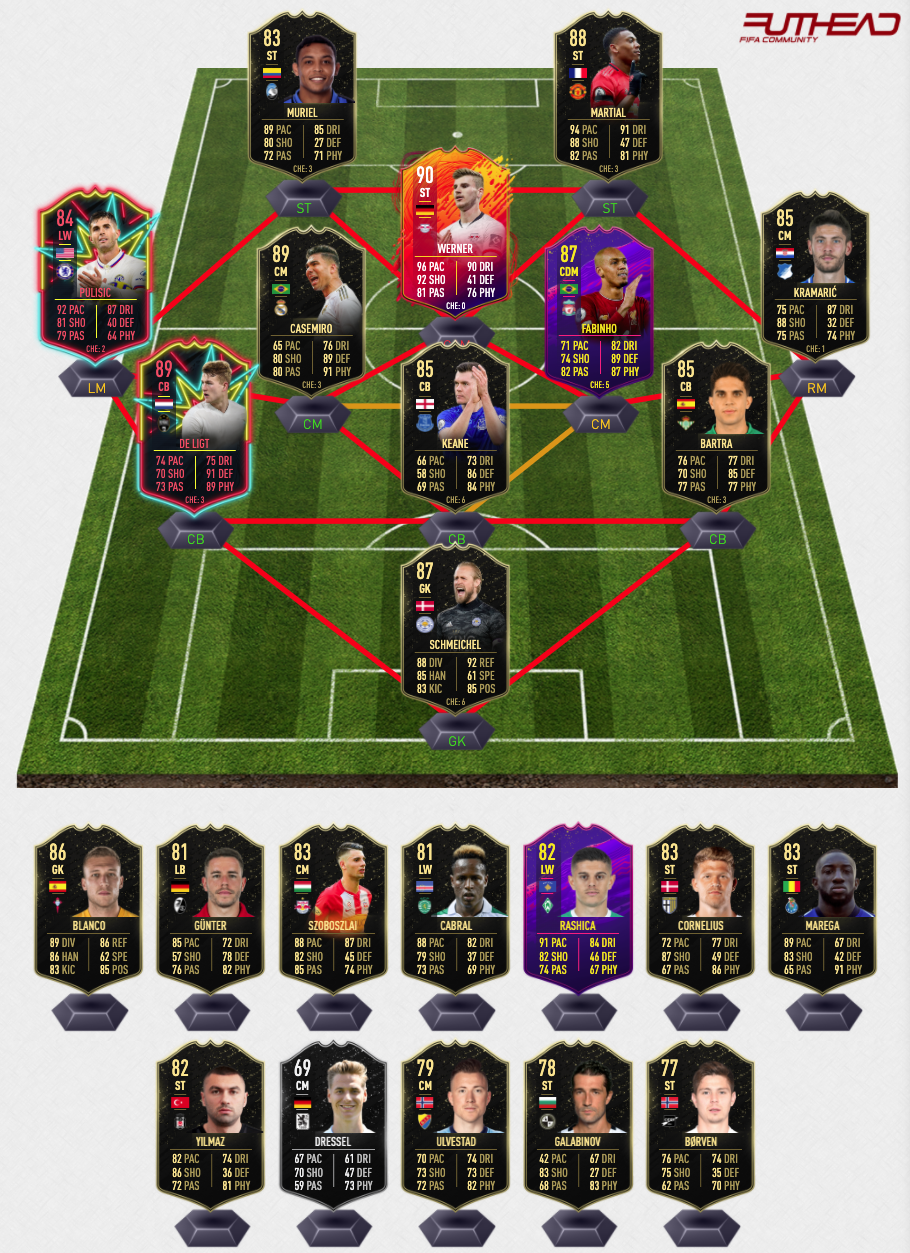 Kasper Schmeichel - GK - OVR 83 There were only two keepers that I could find worthy of being mentioned for this weeks side and neither of them I am entirely convinced on in all honesty. The first is Schmeichel who only had to make one save in Leicester's 0-0 draw with Brighton on Tuesday but it was an important one with the Danish stopper denying Maupay from the spot.

Marc Bartra - CB - OVR 83 There was a lack of both defenders and La Liga options this week so although Bartra is not the strongest of options the fact he fulfills both of those helps him massively. The Spaniard scored the only goal of the game as Betis managed a 1-0 win over Espanyol during the midweek fixtures.

Michael Keane - CB - OVR 80 There were a few less matches to choose from in the Premier League this week due to the FA cup but with the current situation there was still more than enough options to pick a lot of Premier League players. Keane is one who looks cemented in the side after he scored the only goal of the game in order for Everton to pick up a 1-0 win against Norwich.

Matthijs de Ligt - CB - OVR 85 The first of several dynamic items to feature in this side is De Ligt. The Dutch talent has not been as successful with Juventus as he was for Ajax last season but there have definitely been glimpses, with the latest potential IF being his third should he get it. De Ligt is not going to be a name we forget anytime soon. He gets the mention this week for a goal in a 4-0 home win over Leece.

Christian Pulisic - LW - OVR 79 Chelsea managed to hand Manchester City the final blow in their chase for the title, defeating them 2-1 at home. Pulisic scored the first of those goals with a solo run from close to the halfway line before scoring past Ederson. The game was then settled late on via a Willia penalty. Pulisic was later named MOTM though and with it being such a big match I can see him getting an IF as a result.

Fabinho - CM - OVR 85 It was always likely to happen but the inevitable wait is finally over. With Manchester City slipping up against Chelsea it resulted in Liverpool's 4-0 win over Palace being the title clincher. Fabinho is the player likely to make TOTW after managing both a goal and an assist in the match, the goal of which being on another level. Whether it's a IF or an hero item is yet to be seen but I would be very surprised not to see him feature.

Andrej Kramaric - CM - OVR 83 Dortmund ended their season disastrously in truth with the chase on Munich failing to develop whatsoever. Insult was added to injury on the final day of the season with Hoffenheim running away as 4-0 winners away from home. Kramaric scored all four of those goals which is by far the best performance this week.

Casemiro - CDM - OVR 87 When it came to la Liga the options were few and far between, which will only increase the chance of Casemiro making the cut here. The Brazilian scored the only goal of the game as Madrid managed to beat Espanyol away from home. Ramos is the alternative from the midweek fixtures but I feel that Casemiro has the stronger shout.

Luis Muriel - ST - OVR 80 Atalanta managed a 3-2 away win over Udinese with their games being as fan attractive as ever, despite the lack of a crowd. Muriel was the man to do the damage for them, scoring two of those three goals. The MOTM award however actually went the way of Lasagna but with Udinese losing I can't see it going his way over Muriel, who was minimally lower.

Timo Werner - ST - OVR 86 Werner played his final game in a Leipzig shirt this weekend before his move to Chelsea is completed and it was one to remember, the German striker scored twice to break the all time Leipzig goal record as Leipzig managed a 2-1 away win over Augsburg. Theres potential for a record breaking item here but club records have not previously been used for these items so I would imagine that the normal IF would be the way forward.

Anthony Martial - ST - OVR 83 Martial gets quite a lot of stick but with his total now at 14 for the season I think its safe to say that hes done a job for United this season. Perhaps still far from his best which we saw at Monaco but he is showing that he has the talent at times. The Frenchman scored all three United goals as they cruised to a 3-0 home win over Sheffield United.

Ruben Blanco - GK - OVR 76 The second keeper I opted for also came from a midweek match with Blanco making a total of six saves in Vigo's 1-0 away win over Sociedad. Vigo went on to draw 2-2 with Barcelona with could easily warrant an IF but with no clear option coming from that match I feel that Blanco is still the best bet from Celta Vigo.

Christian Gunter - LB - OVR 75 It's rare that I go against the kicker MOTM in these predictions but I feel as though there is enough differentials to take the punt on this one. Gunter did make their TOTW but was beaten by Waldschmidt for the MOTM award. With various strikers managing more than him though alongside a clear lack of defenders I feel that it would be stupid to ignore one with two assists and a clean sheet and thus I opted for Gunter instead.

Dominik Szoboszlai - CM - OVR 74 This is a name that is likely to become very familiar over the coming decade with the Hungarian youngster hitting the Austrian league by storm. Red Bull Salzburg often produce some insane players with the likes of Mane and more recently Haaland coming from the side. Szoboszlai performed well in both their matches this week but gets the nod from the first where he scored once and assisted another two during a 7-2 win.

Jovane Cabral - LW - OVR 75 Cabral was close to making the cut last week but missed out probably due to the league hes in more than anything but once again he has put in an impressive performance and thus should make the side this time around. The winger scored twice against Belenenses in a 3-1 win for Sporting, picking up MOTM with an 8/10.

Milot Rashica - LW - OVR 79 Werder Bremen managed to escape the automatic relegation in style on the final day of the season, leapfrogging Dussledorf after recording a 6-1 win over Koln. Both Rashica with one goal and two assists as well as Osako with two goals and one assist stand a chance of making this side but with Rashica claiming MOTM with a 1.5 match rating I would expect him to be the player making the cut on Wednesday.

Andreas Cornelius - ST - OVR 74 Tuesday matches appeared to somewhat count last week, especially when it came to the bigger divisions. With that in mind in then makes sense to include Cornelius in this weeks edition. The Danish striker was involved in all four Parma goals during their 4-1 away win over Genoa, scoring three himself before providing an assist to finish the game off.

Moussa Marega - ST - OVR 80 With Benfica slipping up and losing 4-3 it resulted in Porto being able to take a three point lead at the top of the table in Portugal. It came with them winning 4-0 at home to Boavista from which Marega claimed MOTM with an 8/10 for his two goals. Theres a chance that he played out wide but I believe with him starting in the ST role that EA will opt for that.

Dennis Dressel - CM - OVR 59 Both the second and third tiers of Germany got snubbed last weekend which was strange with a couple of clear cut options from each division. That has not put me off including Dressel however after the German managed to score a hat trick from CM in 1860 Munichs 3-0 home win Fredrik Ulvestad - CDM - OVR 69 For the second consecutive week we look set to pick up an IF from the Swedish division, this week from the CDM position with Olvestad scoring three goals for Djurgardens in their 5-0 win over 10 men Kalmar.

Andrey Galabinov - ST - OVR 68 Hat tricks look to be the go to once again this week and although the players are not the best in truth realistically they will be the ones making the cut. Galabinov scored his three in Serie B for Spezia as they recorded a 3-1 away win over Chievo.

Torgeir Borven - ST - OVR 67 Another hat trick from Norway this week with the division seemingly scoring for fun since the resumption. Borven looks set to be the player picking up an IF after his hat trick allowed Odd to come away with a 4-1 win.