FIFA 20 Team of the Week 27 Predictions

Published on by Aarong222 39 Comments 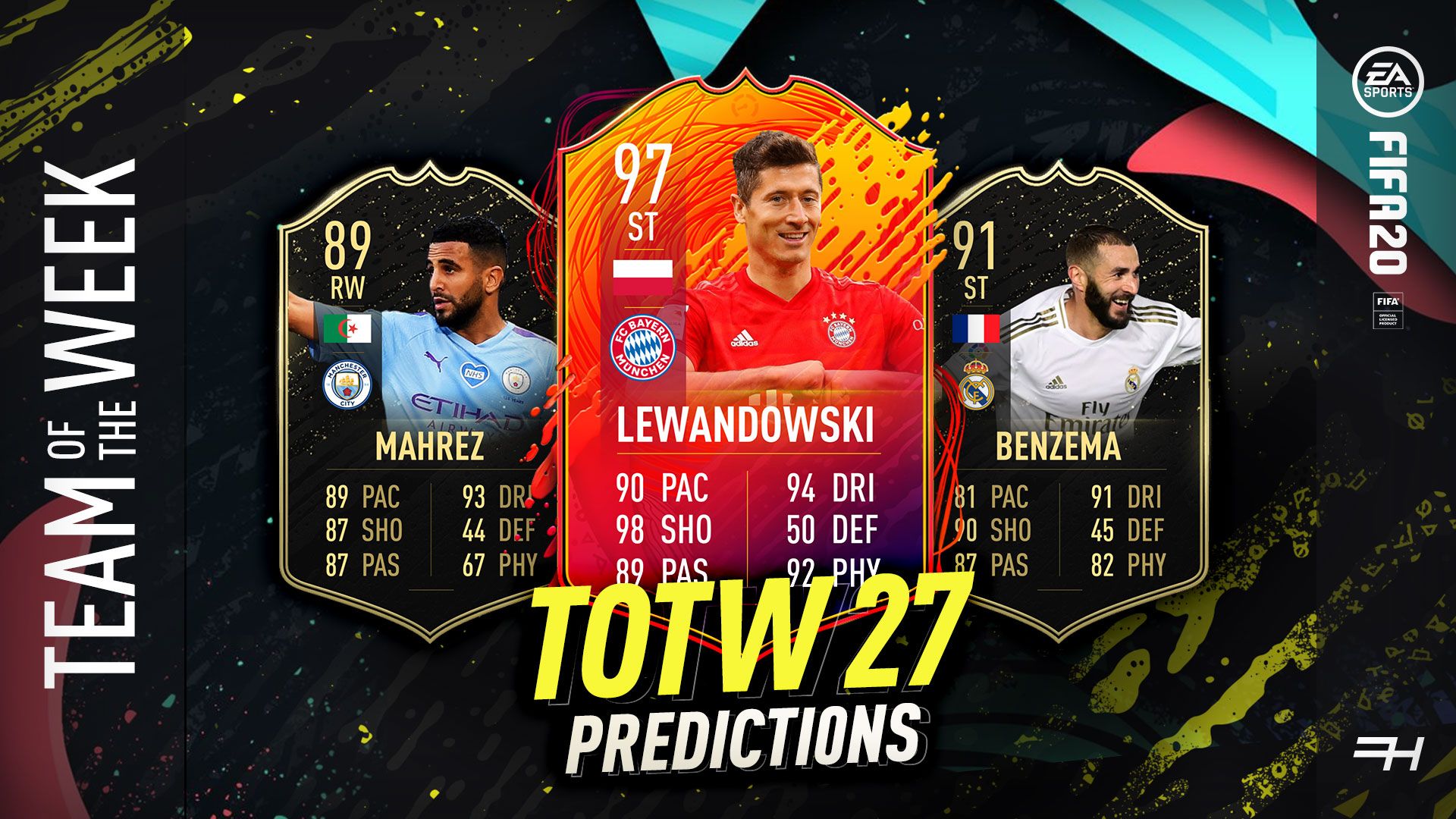 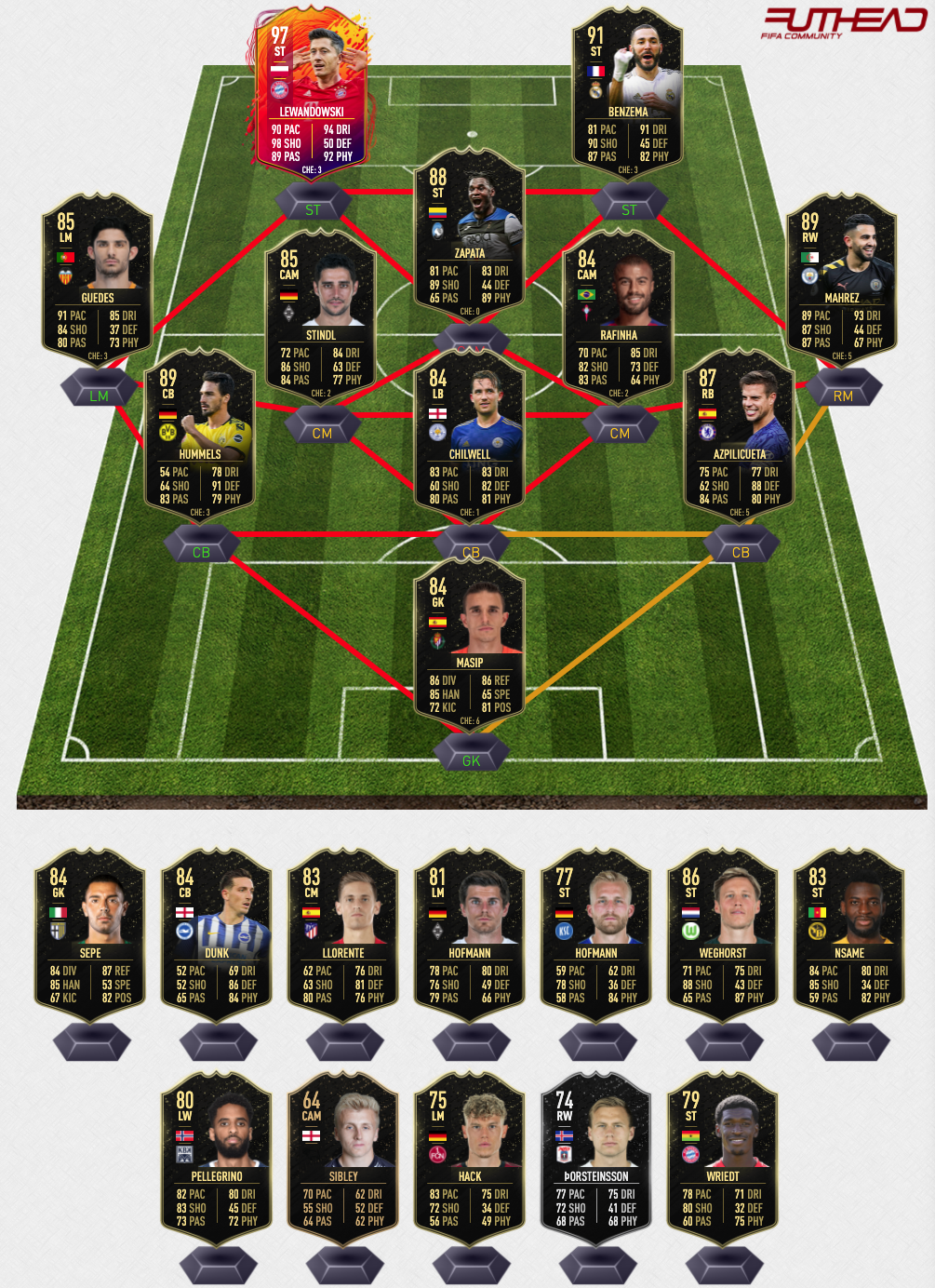 Jordi Masip - GK - OVR 81 It's been a while but it looks as though EA will resume with TOTW this coming Wednesday and thus we are back. The first player to make my prediction comes from a Wednesday match with Masip making several crucial saves, one of which was a penalty stop in Valladolid's 0-0 draw with Celta Vigo. Alternatively Henderson could make the side but with Sheffield United losing 3-0 at the weekend it then edged e towards Masip.

Ben Chilwell- LB - OVR 79 Leicester thought they snatched it late on with Chilwell scoring in the 90th minute but Watford had other ideas with Dawson then leveling the score in the 94th minute. That being said Chilwell still went on to claim MOTM for his stunning strike, leaving him as a strong contender for making this side.

Mats Hummels - CB - OVR 87 Haaland once claimed headlines as he scored twice to further increase his already superb record in the Bundesliga but it was Hummels who went on to claim MOTM as he was fantastic at the back and also played a part in the build up of both Dortmund goals. The risk is of course him already being in packs but as we are unsure how EA will opt to play this I am willing to risk him.

Azpilicueta - RB - OVR 84 Chelsea had an early scare with Aston Villa taking a 1-0 lead just before half time. The came out stronger for the second though and managed to turn it around to win 2-1, taking them 5 points clear in the Champions league race. Azpilicueta assisted both Pulisic and Giroud's goals and thus looks to be a strong option for this side.

Goncalo Guedes - LM - OVR 83 Valencia picked up a routine 2-0 win at home to Osasuna this weekend with Guedes playing a huge role in their three points. The Portuguese winger scored a superb solo effort alongside providing the assist for Moreno. He went on to pick up MOTM and with him being one of the better options in terms of usability this week I expect him to go on to make the cut.

Rafinha - CM - OVR 81 Celta Vigo produced the most convincing win of the weekend in the top divisions with a 6-0 home win. Rafinha scored in both the 40th and 41st minute before then being subbed at the interval. Despite the substitution I feel that the Brazilian has done enough to be included in the side with the damage already being done after 45 minutes.

Lars Stindl - CAM - OVR 80 Gladbach recorded six points from a possible six this week with two impressive performances from them. Stindl performed in both their wins but stood out specifically in the second, a 3-1 win away at Paderborn from which he scored twice to claim player of the week in Germany with a perfect 1 match rating.

Riyad Mahrez- RW - OVR 84 A late addition to the side came with Riyad Mahrez who was dominant during a convincing 5-0 win over Burnley. The Algerian winger scored two of those goals to help continue the almost impossible chase on Liverpool. Although many predictors have gone down the De Bruyne route there is a big risk associated with him due to being in the latest promo from EA.

Karim Benzema - ST - OVR 87 Another big name set to make the side, unfortunately also has a TOTS item already but nevertheless it still offers a cheaper alternative and after the Frenchman managed to score twice for Real Madrid during a convincing 3-0 home win over Valencia I would be surprised to see him miss out. Alternatively we could see Asensio make the cut for his goal and assist but I feel that Benzema is the more likely of the two.

Duvan Zapata - ST - OVR 82 Atalanta are back and they continued where they left off, scoring goals for fun. They managed four this week, during a 4-1 win over Sassuolo taking their season total to 74. Zapata scored two of the four goals and with a 7.5 match rating it should be enough for him to pick up yet another special item.

Robert Lewandowski - ST - OVR 89 Lewandowski is still the out and out goalscorer hes always been despite a couple of months off. The Polish international continues to score week in week out, adding another two to his name during Munich's 3-1 win at home to Frieburg. There are a few big names looking likely for this weeks side which is exactly what EA would have hoped for in the return of the promo.

Luigi Sepe - GK - OVR 75 With a few Italian matches being played on Monday evening it's questionable as to how many are going to count for this upcoming side and thus I expect a couple to be included from the few matches previous to those. Sepe looks to be a strong contender after keeping Parma in the match during their 1-1 draw with Torino. The Italian stopper managed a total of seven saves, one of which was a penalty which saw him awarded MOTM with a 7.5.

Lewis Dunk - CB - OVR 78 In a match full of drama, especially for Maupay who went on to score a last minute winner after controversially injuring Leno I cant see the striker claiming a TOTW spot as a result although I fully expect Brighton to feature. As a result I expect Lewis Dunk to feature after the CB scored the first Brighton goal to go alongside a strong defensive performance.

Marcos Llorente - CM - OVR 80 There were two clear options from Atletico with both llorente and Felix standing out. the main differential here was that Felix is currently in packs due to the recent promo and although I am willing to take a couple of risks here I didn't want to overdo it and thus I felt that Llorente was the safer option with his one goal and two assists despite coming off the bench.

Jonas Hofmann - LM - OVR 78 The second Gladbach player to make it into my side is Hofmann. Two players from the same side is a rarity however seeing as though they come from seperate games I can see them both making the cut. Hofmann was awarded player of the week for the midweek set of fixtures after he scored twice in their 3-0 home win over Wolfsburg.

Wout Weghorst - ST - OVR 81 There were several players who managed to score twice in the Bundesliga over the two gameweeks they played in but only a couple can realistically make the cut. I expect one of those to be Weghorst after his brace in Wolfsburg's 4-1 win saw him claim a 1.5 match rating from Kicker.

Jean-Pierre Nsame - ST - OVR 74 Nsame is one of those players who you can easily say was robbed of a TOTS item due to the division he plays in. The Cameroon striker put in another brilliant display this weekend, scoring all three of young boys goals in their 3-2 home win over Zurich taking his tally to 21 goals in just 22 games.

Philipp Hofmann - ST - OVR 67 With TOTW no longer being the rewards for FUT champs I expect EA to be a little more relaxed on the amount of silvers making the cut and thus I have a 6th with Hofmann. The Karlsruher striker scored all three of their goals during a 3-3 draw and although two came from the penalty spot he also won those penalties in the first place.

Amahl Pellegrino - LW - OVR 62 There were a couple of huge scores in Norway on Sunday which left us with a flurry of IF options, arguably the best of the bunch comes with Pellegrino though. The winger was heavily involved in the game, scoring three of his own alongside also providing an assist. WIth Kristiansund going on to win 7-1 I can't see the scoreline being overlooked.

Louie Sibley - CAM - OVR 55 Bronze IF's have been a rare thing this season with the current TOTW format but with Sibley being a 55 rated bronze item there is potential for another bronze IF here. The youngster kicked off the return of the championship in style, scoring all three of Derby's goals in their 3-2 away win over Millwall.

Robin Hack - LM - OVR 65 Although I actively tried to avoid predicting the midweek fixtures due to the uncertainty it withholds, especially with the lower division, I simply couldn't ignore those spectacular performances. Nurnburg actually had three options for this side but the obvious choice is to go with Kickers player of the week in Robin Hack after he scored three of their six from LM.

Jon Dagur Þorsteinsson - RW - OVR 64 Still to this day play off matches are considered an unknown variable for predictors with EA seemingly including them some weeks and not for others. That being said with Dagur's performance coming during a championship play off fixture I can see his performance being noted and with three goals and one assist to his name he walks into this side.

Kwasi Okyere Wriedt - ST - OVR 69 Wriedt has already been snubbed on a couple of occasions this year but he continues to knock on the door with another three goals to his name during a 5-1 home win over Meppen. It takes his goal tally to 22 for the season with a couple of clubs now knocking on the door for Ghanain striker.