FIFA 20 Team of the Week 26 Predictions

Published on by Aarong222 66 Comments Updated on 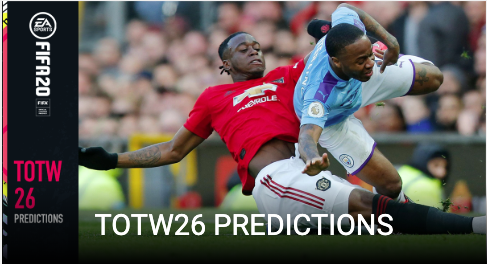 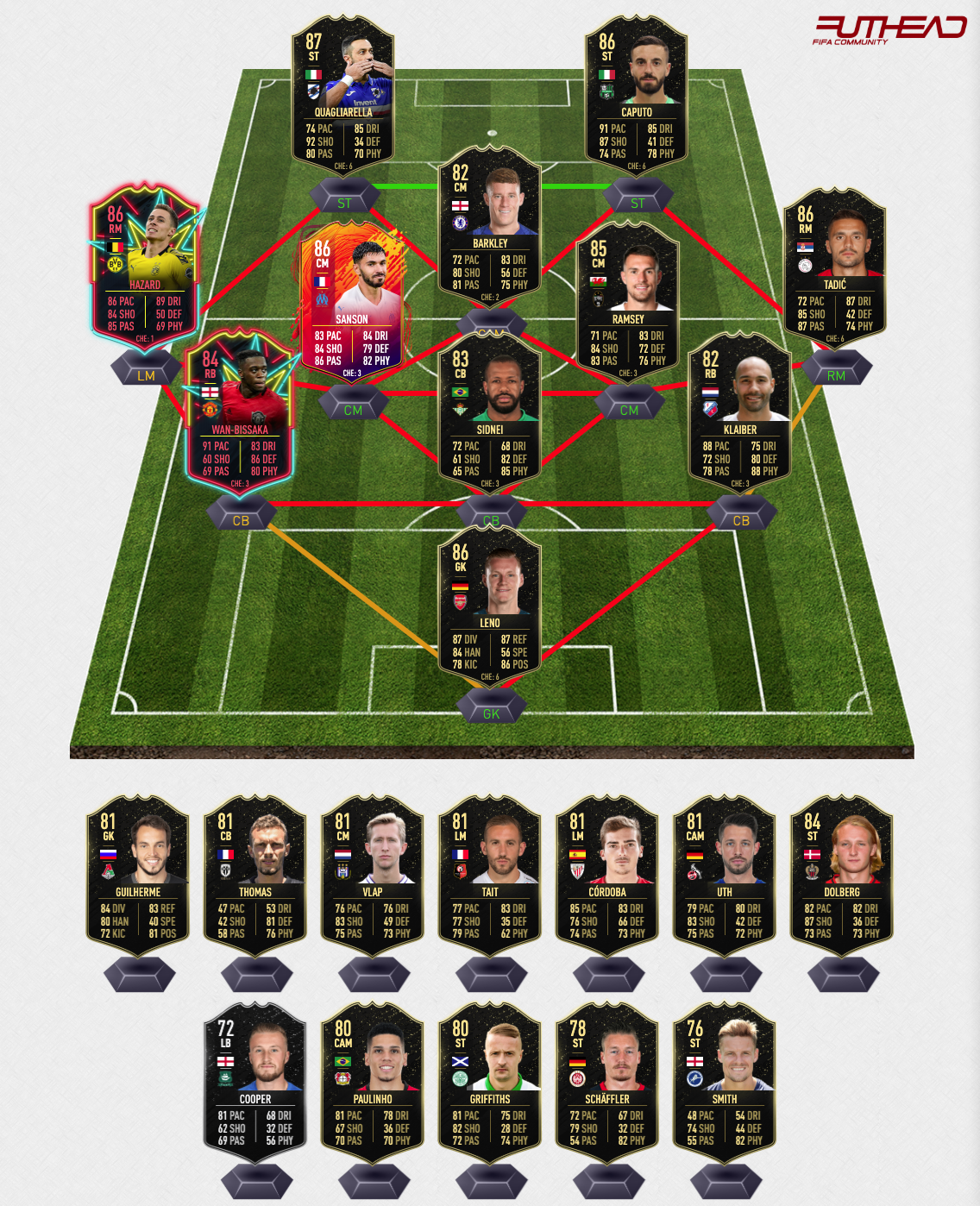 Bernd Leno - GK - OVR 84 Goalkeepers in the Premier League are few and far between when it comes to IF's but we could be set for back to back weeks with them in with Leno being the latest to impress. The Arsenal stopper was crucial in their 1-0 win over West Ham, making six saves in total to keep his clean sheet in tact.

Aaron Wan Bissaka - RWB - OVR 79 All the talk is about Trent when it comes to English RB but AWB is a serious competitor for him in my eyes, he made a big move to United in the summer and has continued to excel since. He was magnificent in stopping Sterling this weekend during United's impressive 2-0 win over City, claiming MOTM from just about every source going.

Sidnei - CB - OVR 80 Real Betis managed to shock heavy favourites Real Madrid with a 2-1 home win. Although there is no clear IF option I can't see them being ignored altogether. Sidnei scored one of their two goals which I feel will be enough for him inclusion.

Sean Klaiber - RB - OVR 73 There are several Eredivisie players that are set to miss out despite being deserving of an IF. With Klaiber picking up POTW in the Dutch top division I find it hard for him to be ignored though. The defender scored once and assisted another two in Utrecht's 5-1 win over Sparta Rotterdam.

Dusan Tadic - RM - OVR 84 Over the past couple of seasons Tadic has been one of the most regularly ignored players which makes this prediction difficult to make but with Ajax bouncing back from their disappointing loss last week to beat Heerenveen 3-1 away from home I just can't ignore the Serbians brace. He picked up MOTM with a 7.5 which although wasn't enough for POTW is a score which often sees players included.

Aaron Ramsey - CM - OVR 83 Serie A games ended up going underway this weekend, although they were played behind closed doors. Juventus v Inter was still a huge game in the title race though and favourites, Juventus, were the side to come out on top. Ramsey was involved in both their goals, scoring one and assisting another as they went on to win 2-0.

Morgan Sanson - CM - OVR 79 With a lack of big names available for selection this week I feel that EA could look down the headliner route and Sanson is one of the few dynamic options that stand out. The Marseille midfielder both scored once and assisted another in their 2-2 draw, claiming MOTM with a 7/10.

Ross Barkley- CM - OVR 79 Chelsea put in a convincing display this weekend against Everton, running away as 4-0 winners. There are several options for the IF but I feel that Barkley is the best bet with his two assists and high match rating but both Pedro and Willian are alternate options.

Thorgan Hazard - RM - OVR 82 I have decided to include Hazard due to the caliber of the match with Dortmund's three points away at Gladbach being crucial in the title race. Hazard scored one of their two goals in the 2-1 win and claimed MOTM for doing so.

Francesco Caputo - ST - OVR 75 A late addition to the side comes with Caputo but with the lack of striker options I can see him being included despite it falling on a Monday. Caputo scored twice during Sassuolo's 3-0 home win over Brescia for a potential third IF.

Fabio Quagliarella - ST - OVR 83 Although its highly unlikely that Quagliarella will reach the heights of last years rating (96) his recent form has resulted in an IF and now a second is likely to be on the way. The Italian scored both of Sampdoria's goals in their 2-1 win at home to Verona, with Gazzetta awarding him a 7.5

Guilherme - GK - OVR 78 There were a few keeper options for this spot but in the end I couldn't overlook Guilherme. Lokomotiv ended the match with 10 men but managed to hold onto their 1-0 lead with Guilherme making numerous saves of which included a penalty save.

Romain Thomas - CB - OVR 75 We have seen a lot of defenders from Ligue 1 included in TOTW recently, with many of them being surprises too. Thomas would be deserving of his spot though and with Ligue 1 defenders seemingly in favor recently I can't see them ignoring him. The Anger man scored the second goal in their 2-0 win over Nantes

Flavien Tait - LW - OVR 78 Rennes continue to impress over in Ligue 1 this season, recording a 5-0 home win over Montpellier this weekend. There are a few players that made the L'equipe TOTW but the main decider here was the fact that Tait was gold. The French winger picked up both a goal and an assist as he went on to pick up the joint highest score of the week with an 8/10.

Cordoba - LM - OVR 77 BBVA options were very limited this week so those that do have a chance are likely to make the cut. I expect Bilbao to be a side gaining an IF after their 4-1 away win over Valladollid and Cordoba with both a goal and an assist looks to be the best option here.

Michel Vlapp - CM - OVR 75 Anderlecht dominated the Belgian TOTW after their 7-0 home win over Waregem with one player inparticular standing out. Vlapp picked up a 9/10, a rare score to see, after he scored three of Anderlecht's seven goals and played a large role in the overall performance.

Mark Uth - CAM - OVR 78 With a sheer lack of Bundesliga options I have opted to take a couple of punts. Uth is one of those punts after he picked up two assists for his new side, Koln. In their 2-1 away win over Paderborn

Kasper Dolberg - ST - OVR 76 I briefly debated over the IF gap between Dolberg's first IF and this potential second one. I feel that the five week gap is more than enough though and thus he should easily make this side. The talented Danish striker scored both Nice goals in a narrow 2-1 home win over Monaco, with the second of those goals coming in the 93rd minute.

George Cooper - LB - OVR 63 There were a couple of defenders which made a strong case for this side and I have actually had to snub Risdon, who claimed three assists, that is after Cooper put in an exceptional performance for Plymouth in their 3-0 win over Macclesfield with the defender involved in all three goals, scoring two and assisting another.

Paulinho - CAM - OVR 71 This week was extremely difficult for Bundesliga options but as par usual I have the POTW included in my side, despite being a silver item. The Leverkusen talent scored twice and assisted another in their 4-0 win over Frankfurt

Leigh Griffiths - ST - OVR 74 Griffiths has had to take a back seat the past couple of season for Celtic which is a shame for him as he has always done really well for them but with the talent coming through their ranks he has been on the bench for large parts of the season. Celtic gave him a start against St Mirren though and he proved his value to the side, scoring three and assisting another in their 5-0 win.

Manuel Schaffler - ST - OVR 70 Wehen, who were in relegation previous to their latest match fell behind in the third minute of their match against Osnabruck but determined to change their fortune around they came back in style. Scoring an impressive six goals to eventually win 6-2. Schaffler scored three of those goals and assisted another to claim POTW

Matt Smith - ST - OVR 68 Millwall are making a late charge for the play off spots in the Championship and their latest win was a big one in terms of the race, winning 3-0 away at Nottingham Forest. Matt Smith scored all those goals and secures a spot in totw as a result.