FIFA 20 Team of the Week 25 Predictions

Published on by Aarong222 51 Comments Updated on 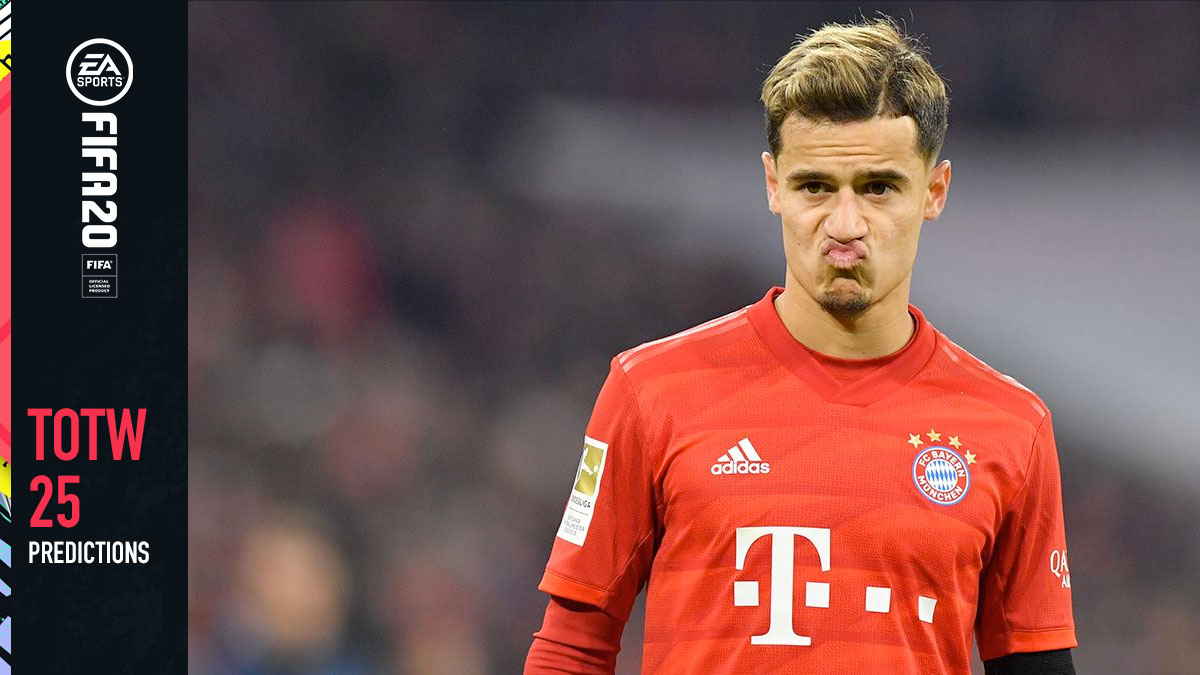 Guaita - GK - OVR 79 Goalkeepers were few and far between this week with only one clear candidate. As a result this specific spot is up for grabs. The best shout for me has to be Guaita, after the Palace goalkeeper made a total of eight saves to keep his clean sheet in a 1-0 win over Brighton.

Matt Doherty - RWB - OVR 78 Once again I feel as though Jota would have made TOTW had his recent Europa League MOTM been released after he was sensational during Wolves 3-2 win over Spurs but instead we have Doherty. The Irishman was also a big factor in the three points scoring one of the three and playing a big role in another.

Kostas Manolas - CB - OVR 85 This ones a bit of a punt but with only a few big name player available alongside only a handful of games being played over in Italy this week Manolas becomes a good candidate. The Greek central defender scored the opening goal of the game in Napoli's 2-1 win over Torino, claiming MOTM in the process.

Carvajal - RB - OVR 85 Real Madrid bounced back from their Champions League 2-1 home loss against Manchester City to record an impressive 2-0 El Classico win. Carvajal was the one who impressed throughout claiming MOTM from just about everywhere with an impressive defensive performance and an assist to go with it.

Coutinho - LM - OVR 86 It was a strange ending to the Munich v Hoffenheim game with both sides practically refusing to play the final 15 minutes in protest over fan shenanigans. The damage was already done though with the German outlet winning 6-0. Coutinho looks set to claim the IF after scoring two of those six games, claiming MOTM with a 1.5 from Kicker.

Marcus Alonso - LWB - OVR 81 For me Alonso was robbed last week but as a result of that we have an obvious inclusion for TOTW 25. Chelsea will be disappointed with their 2-2 draw with Bournemouth but it could have been even worse had it not have been for the Spaniard. Alonso made it three in two games, scoring both their goals to help secure a point.

Teji Savanier - CM - OVR 79 Ligue 1 looked rather straight forward from a predicting point of view with the players you would expect picking up high ratings doing just that. Montpellier recorded a 3-0 home win over Strasbourg with central midfielder Savanier scoring two of those three goals. L'equipe awarded him an 8/10 which practically locks him into the side.

Mislav Orsic - LM - OVR 73 Orsic burst onto the scene early on this FIFA and as a result picked up a headliner item from EA. The Croatian has since been quiet and thus EA havn't had the opportunity to give the item a boost. Should they want to though there is the option for TOTW 25. That is after he picked up one goal and two assist's in Zagreb's 4-0 home win.

Duvan Zapata - ST - OVR 82 Atalanta scored seven goals for the third time this season, claiming their stance as the most attacking side in Italy. Once again Josip Ilicic was heavily involved and actually picked up the official MOTM. I do see the IF going to Zapata instead though after he scored three times and has significantly less special items.

Dario Benedetto - ST - OVR 79 Marseile managed to narrowly come out on top when facing Nimes, coming away with a 3-2 win. Benedetto scored all three of those goals to help secure both the three points and his SIF.

Andre-Pierre Gignac - CF - OVR 80 Once again when selecting Gignac the questionable decision was his actual position with him seemingly playing just behind the striker. Last time his brace wasn't enough and he missed out but after scoring three this time around I can't see the same occurring come Wednesday. Tigres went on to win the match 3-0.

Predrag Rajkovic - GK - OVR 76 Its not often that L'equipe award a rating higher than an 8/10 so when Rajkovic picked up a 9/10 for his performance in Reims 1-1 draw away at Monaco I simply couldn't ignore him. In total he made six saves, only conceding a Ben Yedder penalty. It doesnt seem overly impressive but with some big saves being made he deserves his spot.

Ramy Bensebaini - LB - OVR 77 Stindl would have been an obvious shout for TOTW had he not recently of picked up an IF and as a result becomes unavailable for selection here. With an obvious lack of Bundesliga options however I can see the next best Gladbach option getting the nod in Bensebaini after he scored once in their 3-2 win.

Jordan Morris - LM - OVR 71 It was the return of the MLS this weekend and with it being such a big audience for EA I can see them including a player in this side. The options were few and far between but the best one looks to be Jordan Morris. The Sounders man came off the bench to score twice in their 2-1 home win over Chicago Fire.

Ismaila Sarr - RM - OVR 78 Arsenal fans can breathe a sigh of relief after Liverpools unbeaten season came crashing down with Watford producing a sublime display which saw them come away with a 3-0 win. Sarr was the mastermind behind the result, scoring twice and assisting another, showing why the young Senegalese winger has a lot of hype around him.

Dieumerci Mbokani - ST - OVR 78 Antwerp continue to impress this season, with another strong performance seeing them win 3-1 at home to Oostende.Mbokani scored all three of those goals which will lead to his inevitable IF.

Youssef En-Nesyri - ST - OVR 76 En-Nesyri managed to get himself a transfer away from relegation candidates in Leganes to play for Sevilla instead. Early days look good for the young Moroccan, after he scored twice, with the winner coming late on. In Sevilla's 3-2 home win over Osasuna.

Nikola Kalinic - ST - OVR 79 Last weeks postponed games in Italy made it a difficult league to predict but this ones the complete opposite with those still in action turning out to be enthralling matches. Roma traveled away to Cagliarli coming away as 3-2 winners. Kalinic is seemingly the obvious choice after he scored twice and assisted another.

Hamdan Al Shamrani - CB - OVR 64 I was stuck in two minds with this one but in the end I went for Shamrani as the Saudi league seemingly gets a lot of love from EA in the selection process. Shamrani managed to score twice from the back in a 5-1 win, getting the joint highest match rating for doing so.

Danny Blum - LM - OVR 70 With the Bundesliga offering very little in terms of IF options it leave the door open for options in the lower divisions. Blum needed no second opportunity, scoring three goals in a 4-4 thriller from LM. He went on to claim player of the week with a perfect 1 match rating from Kicker.

Max Burgess - CAM - OVR 63 Central Coast are having a rough time this season and currently sit at the bottom of the A-League table. Their case wasn't helped at all when playing away at Western United, with the home side recording a convincing 6-2 win. Burgess scored three of those six goals making him a strong candidate for TOTW 25.

Federico Macheda - ST - OVR 73 Outside of the three hat tricks the reserves section is wide open with multiple ways of taking things. Macheda seems to be one of the better options though after he scored twice and assisted another in Panathiakos's 4-1 win.

Klauss - ST - OVR 69 After multiple seasons of domination it looks as though Salzburg's reign could be coming to an end. That is with Linz winning game after game it has left them six points clear at the top. Their latest three points came via a 5-1 home win over Hartberg from which Klauss scored three times.