FIFA 20 Team of the Week 24 Predictions

Published on by Aarong222 87 Comments 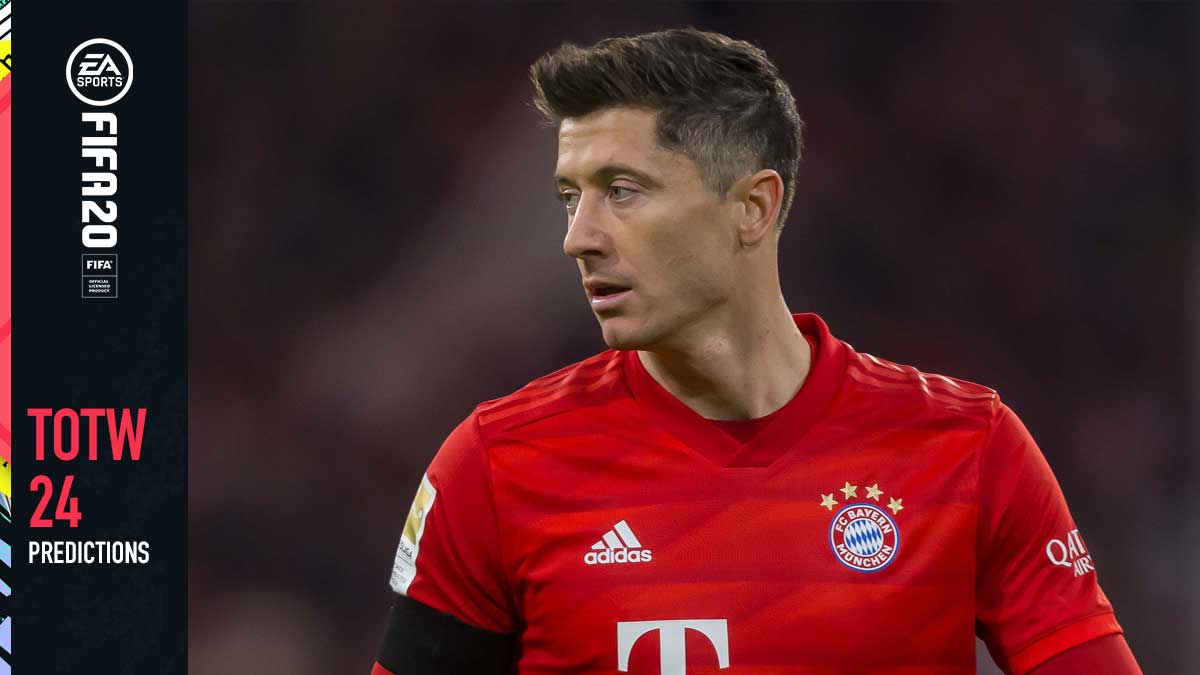 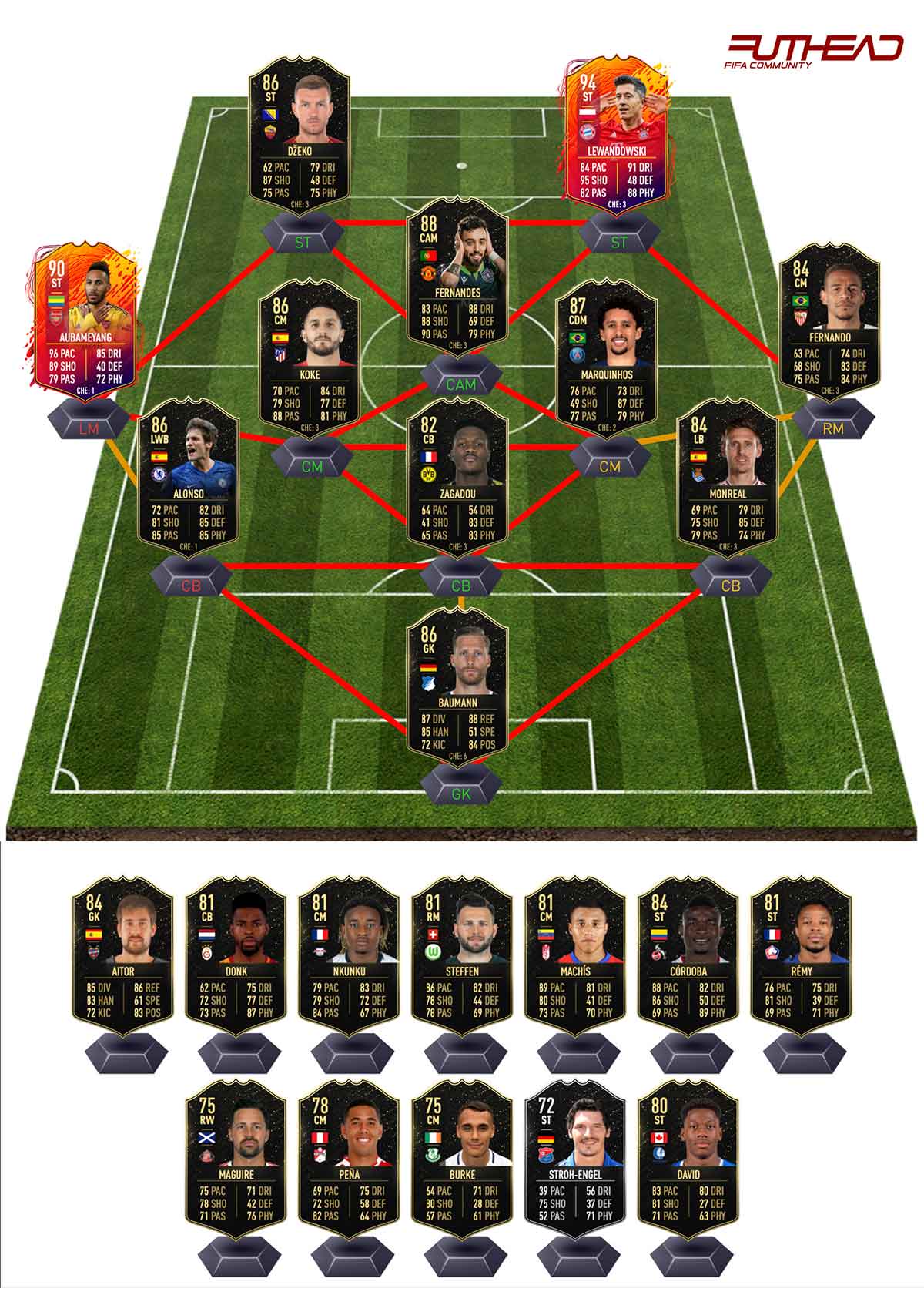 Oliver Baumann - GK - OVR 82 Gladbach will be baffled how they only came away with one point this weekend; the main reason being Baumann between the Hoffenheim sticks. In total, he made an impressive nine saves, one of which was a penalty save in a 1-1 away draw. He claimed Bundesliga keeper of the week, receiving plaudits left right and center.

Dan-Axel Zagadou - CB - OVR 79 There was a ridiculous amount of candidates from the Bundesliga this week, and it is likely that a couple will miss out, even with them deserving to be there. Dortmund's central defender, Zagado is another option after he scored their opening goal in a 2-0 win over Werder Bremen.

Nacho Monreal - LB - OVR 79 Sociedad picked up an impressive 3-0 win hosting Valencia this weekend with Monreal named MOTM after scoring once and helping out defensively to keep a clean sheet. I feel as though the result gives the Spaniard the edge over the likes of Ruiz, Cuadrado, and Van Aanholt, who were the other three players I considered for the final spot.

Marcos Alonso - LWB - OVR 81 It's been a quiet season for Alonso, really, with the Spaniard not being as active going forward as we have seen in the past. That being said, he is still in line for his second IF of the year after scoring one of Chelsea's two goals in their 2-1 win over Spurs. He made the BBC's TOTW and with him being 87 rated stands out in the side.

Pierre-Emerick Aubameyang - LM - OVR 88 Arsenal missed PEA during his suspension and that showed with so much more attacking threat being present with the Gabon international on the field. Although he played out on the left this week, he was still crucial in the attacking third, scoring two of their three goals in a five-goal thriller with Everton.

Marquinhos - CB/CDM - OVR 86 Marquinhos is a difficult selection for several reasons, mainly due to the fact L'Equipe only awarded him a 6/10 making Verratti MOTM with a 7. That being said, with a lack of Ligue 1 options, I find it unlikely that Marquinhos will miss out, especially if EA class him as a defender. The Brazilian scored twice in PSG's 4-3 win over Bordeaux with him starting the match at CDM before moving back to CB after Silva's injury early in the game.

Bruno Fernandes - CAM - OVR 85 We all knew that Fernandes had the ability to shine at United, but it was a question of how the Portuguese man would fit into the side. Early signs have been good, however, and he put in his best shift this weekend during United's 3-0 win over Watford from which he scored once and assisted another.

Koke - CM - OVR 85 Atletico Madrid v. Villarreal can be classed as a big game in Spain, and thus I expect there to be an Atleti IF after their 3-1 home win. Koke looks set to be the best option, and with a tasty positional change coming his way, he offers a decent sized name for EA's side. The Spaniard picked up a goal and an assist to claim a perfect three stars from MARCA.

Fernando - CM - OVR 81 La Liga has been a serious struggle in recent months in terms of predicting for me, and I am now looking at going down different routes with the division; such has lead me to predicting Fernando. The Sevilla midfielder scored once and assisted another in Sevilla's 3-0 away win over Getafe.

Robert Lewandowski - ST - OVR 89 Although Lewandowski has several special items this year already, he has actually only picked up one IF. I expect that number to double on Wednesday, especially considering that he has a Headliner item. The Polish striker scored twice during a 3-2 Bayern win, seeing him claim MOTM with a 1.5 from Kicker.

Edin Dzeko - ST - OVR 84 With Italy postponing so many of their matches, it left very little to select from for this side in terms of the Italian league. Roma looks to be the obvious in-form with them winning 4-0. Mkhitaryan was the first choice, but with him currently having a Shapeshifter, it rules him out. Instead we have Dzeko, who picked up both a goal and assist, narrowly missing out on MOTM to Mkhi.

Aitor - GK - OVR 79 Levante pulled off the biggest shock of the weekend, managing a 1-0 win at home to Real Madrid. Aitor, who has been magnificent all season for them, was once again the hero, making a total of eight saves in keeping his clean sheet intact and denying Madrid from getting on the scoresheet.

Ryan Donk - CB - OVR 76 It's rare that a Galatasaray-Fenebache game goes ignored by EA, especially with Donk picking up both a goal and an assist from CB in their 3-1 win. Although they didn't keep the clean sheet, with Donk being a Gold item, I think it's safe to say that he will be included this week.

Renato Steffen- RM - OVR 76 It seems a ridiculous thing to say considering that Steffen picked up the maximum possible mark from Kicker, but if I was to exclude someone Bundesliga from this side, he would be high up on the list. That being said, I simply can't ignore his two goals in Wolfsburg's 4-0 win over Mainz, and thus he makes my team.

Christopher Nkunku - CM - OVR 77 The stream of Bundesliga players this week continues with Leipzig joining in on the action and recording a 5-0 win over Schalke, showing how dominant they can be this year. Nkunku was the mastermind behind most of Leipzig's most threatening attacks, and produced four of the five assists.

Darwin Machis - CM - OVR 75 The best option from La Liga this weekend (excluding Messi, who doesn't count anyway) was an unfamiliar face in Darwin Machis. The Venezuelan scored twice for Granada in a 3-0 win away at Osasuna as they continue to close in on a European spot.

Loic Remy - ST - OVR 77 It's only been a month since EA released Remy's Player Moments SBC, and they have been against releasing IFs close to their SBCs so far this FIFA. But I just feel there is a big enough gap to justify awarding Remy the inform in this instance. The Lille forward scored two of their three goals in a 3-0 win at home to Toulouse.

Jhon Cordoba - ST - OVR 76 Koln ran away as 5-0 winners against Hertha Berlin and produced two candidates for TOTW in the process with both Kainz and Cordoba scoring twice and assisting another. Kainz has a Shapeshifter item, however, and thus is ruled out, making this selection easier.

Chris Maguire - RW - OVR 67 Last week saw three assists noticed well, with a couple of options getting the nod despite two-goals-and-one-assist and hat tricks being ignored. Due to this, I find it difficult to overlook Maguire, who also picked up three assists.

Graham Burke - CM - OVR 66 We often see some ludicrous performances in the Irish league, and this ones a prime example of that. Shamrock recorded a convincing 6-0 win at home to Cork City and it was from that match that their central midfielder, Burke, managed to score five times, including a spell which saw him score a five-minute hat-trick.

Sergio Pena - CM - OVR 70 Willem have performed well this season, which has seen them in the playoff spots for most of the campaign now. They got a bit of a reality check when travelling to Emmen though, with the hosts winning 4-2. Pena was fantastic throughou and was involved in all four of those goals, scoring one and assisting the other three.

Dominik Stroh-Engel - ST - OVR 64 It's been a while since I have been able to list off hat tricks for the reserves, but since the section picks itself for the most part this week, we could be in for some high scores. Stroh-Engel scored three goals in 5-3 away win in the third tier of Germany, and although he scored an own goal as well, I still expect to see him in TOTW.

Jonathan David - ST - OVR 74 David has come into the equation for a TOTW position on many occasions, but each time has narrowly missed out largely due to being a Silver item. The Canadian has finally managed to score a hat trick though, and thus should get off the mark in terms of in-forms.