FIFA 20 Team of the Week 23 Predictions

Published on by Aarong222 67 Comments 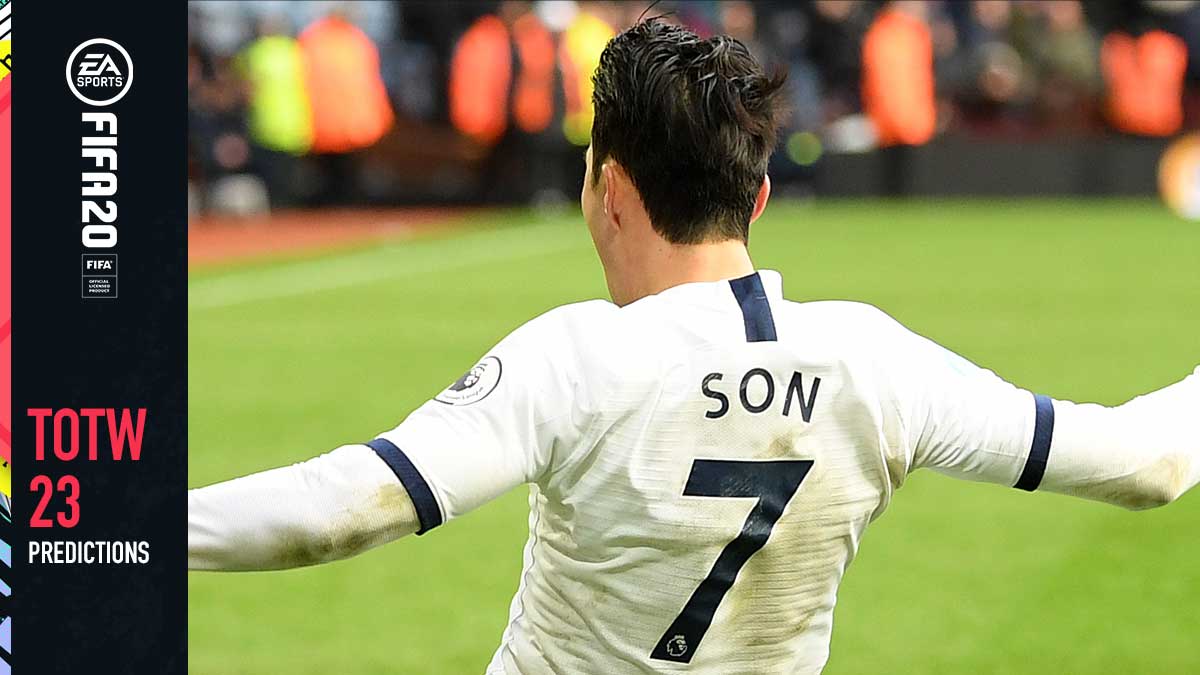 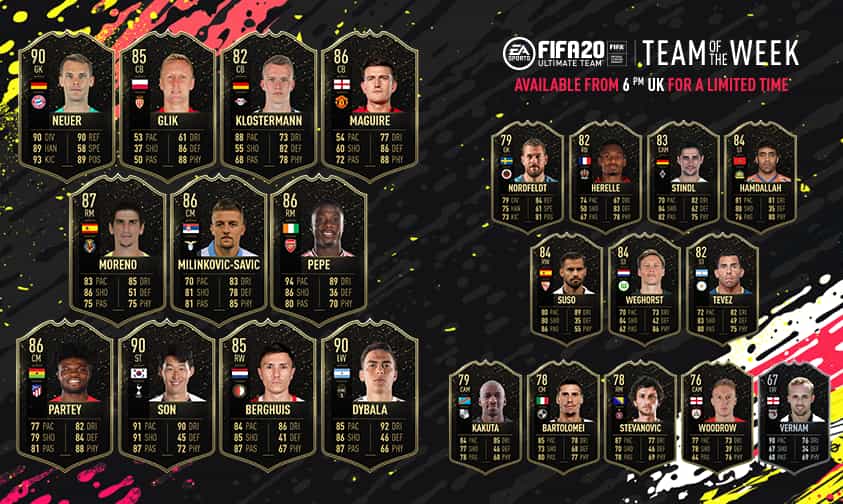 Walter Benitez - GK - OVR 80 The past two weeks we have seen Ligue 1 keepers who have not feature in L'Equipe's TOTW pick up an in-form. Bizarrely, we could be about to make that three with Benitez. The Nice keeper made a total of seven saves alongside saving a penalty in their 2-0 win over last place Toulouse.

Harry Maguire - CB - OVR 82 I was always likely to include a player from the United-Chelsea match with it being one of the bigger games this weekend, despite it falling on a Monday night. I was correct to wait with Maguire now being likely to pick up his second IF. The defender was fortunate not to be sent off previous to his goal but after scoring in a 2-0 win I can't see him being ignored.

Kamil Glik - CB - OVR 80 Defenders were few and far between this week and I think that we will see some random inclusions from EA as a result. I am happy to take the punt on L'quipe's gold defender in Glik. The Polish CB was solid at the back during Monaco's 1-0 win, claiming a 7/10 for his performance.

Sergi Roberto - RB - OVR 82 Although Roberto is far from a certainty with a severe lack of defensive options, the fact he scored in a 2-1 win for Barcelona should secure his spot in the side as it stands out from other options -- most of which are punts. He picked up average match ratings, which is the worry here, but he also has the big-team factor.

Serge Gnabry - LM - OVR 84 It's been a while since Gnabry's name has hit the headlines after that crazy month or so for him earlier this season. He now looks set to pick up his SIF though after scoring twice for Munich during their 4-1 away win over Koln.

Sergej Milinkovic Savic - CM - OVR 85 Lazio handed Inter Milan only their second defeat of the season and in turn leapfrogged them into second position. As expected, Lazio are likely to pick up an IF from the match, and that looks set to be Milinkovic-Savic. He scored one of the two goals and picked up Gazzetta MOTM with an 8/10.

Suso - RW - OVR 82 Suso has made the move from Italy to go and play his football in Spain for Sevilla and is already making an impact for them. Although they could only manage one point with a 2-2 draw at home to Espanyol, Suso was crucial for that point, picking up both a goal and an assist.

Nicolas Pepe - RM - OVR 83 We all knew about Pepe's potential, the question was when will we see the best of him. Since Arteta has taken over, we have seen more of the 72 million pound man, and we have also since glimpses of his best football being played. This weekend was another example of that, running rings around the Newcastle defence and chipping in with a goal and two assists during the 4-0 victory.

Gerard Moreno - RM - OVR 81 We saw a couple of random special item upgrades last week with Ben Yedder especially and thus I feel as though they will be using them when possible fro this point onwards. Moreno picked up both a goal and an assist in Villarreal's 2-1 win which I can see being enough for his third IF.

Heung Min Son - ST - OVR 87 With Harry Kane out of action, it gives Spurs the opportunity to rotate up the top with many players being able to play both their and in the attacking line behind. Son was given the chance to lead away at Villa and took it with both hands, scoring twice in their 3-2 away win with the winner coming with practically the last kick of the game.

Wout Weghorst- ST - OVR 81 Weghorst was crucial for Wolfsburg this weekend, being the main reason as to why they walked away with all three points. The German outlet managed to beat Hoffenheim 3-2 away from home with The Dutch giant scoring all three of the goals.

Matheus - GK - OVR 76 I believe that the gap for Matheus to pick up his SIF is just enough with a four week gap. The Baga stopper made a few crucial saves in their shock 1-0 win over Benfica, claiming MOTM with an 8/10 for doing so.

Domenico Criscito - LB - OVR 79 Ironically had Soumaoro not have randomly picked up an IF last week, we would have seen him included here. But seeing as he is now ruled out, we go to another defensive option in Criscito. The Italian picked up a 7/10 for his performance which included a penalty goal late on.

Nordi Mukiele - RWB - OVR 77 There is some debate over Mukiele's position with RM being argued over RWB but with the lack of defenders I am willing to take the punt on him being listed as a defender. The Frenchman picked up MOTM for his goal in Leipzig's 3-0 win over Werder Bremen.

Steven Berghuis - RW - OVR 80 Beghuis could have been a dangerously high rating had he not have been snubbed multiple times early on in the year. He now looks set to pick up his second IF of the year after scoring twice and assisting another in Feyenoord's 4-3 away win over Zwolle.

Mats Rits - CM - OVR 75 There were two options from the Belgian league this week, but with one being silver, it looks to be an easy selection with Rits. The midfielder scored both of Brugge's goals in their 2-1 home win.

Carlos Tevez - ST - OVR 78 Onto a fan favourite now with Carlos Tevez. The Argentine scored twice and assisted another for Boca Juniors this weekend during a 4-0 away win. The game came during the early hors on Monday morning, but with several high profile games being played Monday evening, I would be surprised to see him miss out.

Abderrazak Hamdallah - ST - OVR 79 Hamdallah is becoming a regular name when it comes to FIFA players with the Moroccan scoring for fun the in the Saudi league the past couple of seasons. He added another three to his tally this week during a 4-2 away win.

Kristoffer Nordfelt - GK - OVR 72 My record continued to decline on non-gold keepers last week with another incorrect prediction; once again, however, we are still willing to take the punt. This time we head over to Turkey, where Nordfelt managed to make a very impressive 12 saves to help hold onto a 1-0 win. As you would expect, he claimed high match ratings as a result.

Charles Vernam - RW - OVR 57 With the English lower divisions playing twice this week, it was also likely that we would see a hat trick or two. And although Vernam's fell on a Tuesday night, I can still see him getting the nod from EA. The Englishman scored all three of Grimsby's goals in their closely contested 3-2 away win over Colchester.

Alan Judge - CAM - OVR 66 You could say this ones a tad biased considering I am an Ipswich fan, but with several players on two goals and one assist, it's pot luck as to who actually gets it. Judge was phenomenal during Ipswich's 4-1 win over Burton, scoring twice and assisting another.

Serhous Guirassy - ST - OVR 72 Amiens played out an enthralling 4-4 draw with PSG in a game full of drama. I can see an IF coming from the match and with PSG's CB not being in the game it leaves it between two Amien players, with both Guirassy and Kakuta standing a chance. I have opted for the striker, simply due to there being a lack of them this week, but realistically it really could go either way.

Ahmed Issa Koro Kone - ST - OVR 65 Although Kone came off the bench in Servette's 4-1 win, I can't see EA failing to award him with an IF. The Ivorian was crucial in their 4-1 win, scoring three goals for them. The alternate option is the RM, with three assists, but surely Kone gets the nod here.