FIFA 20 Team of the Week 22 Predictions

Published on by Aarong222 68 Comments 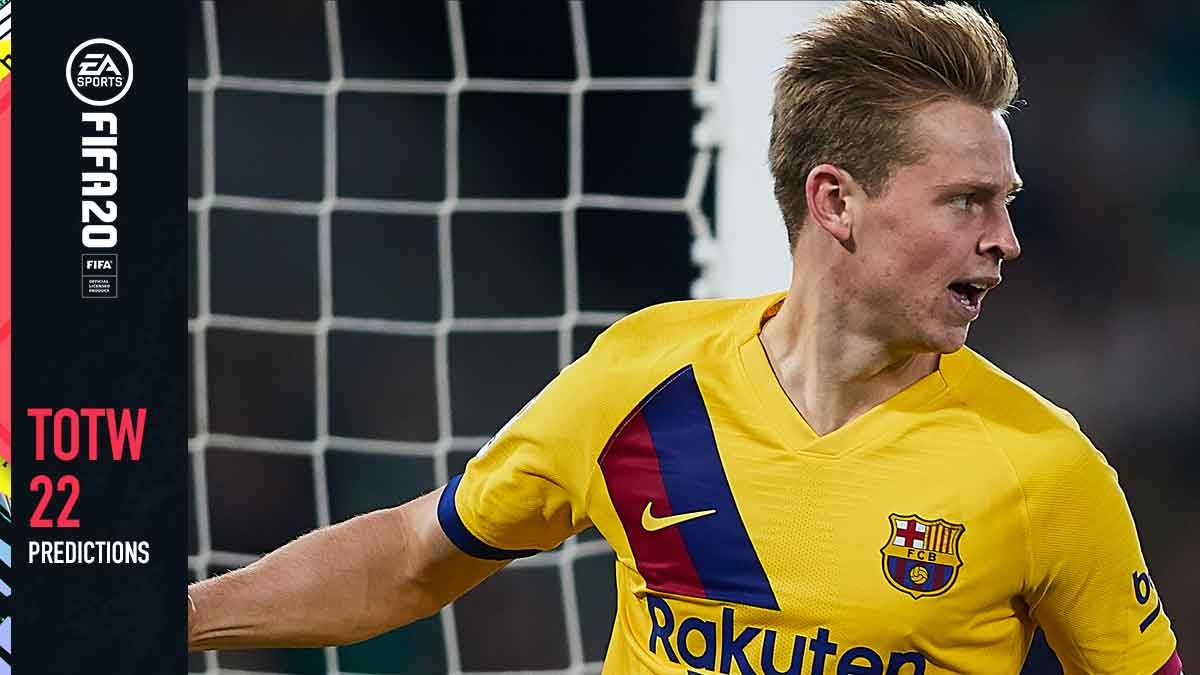 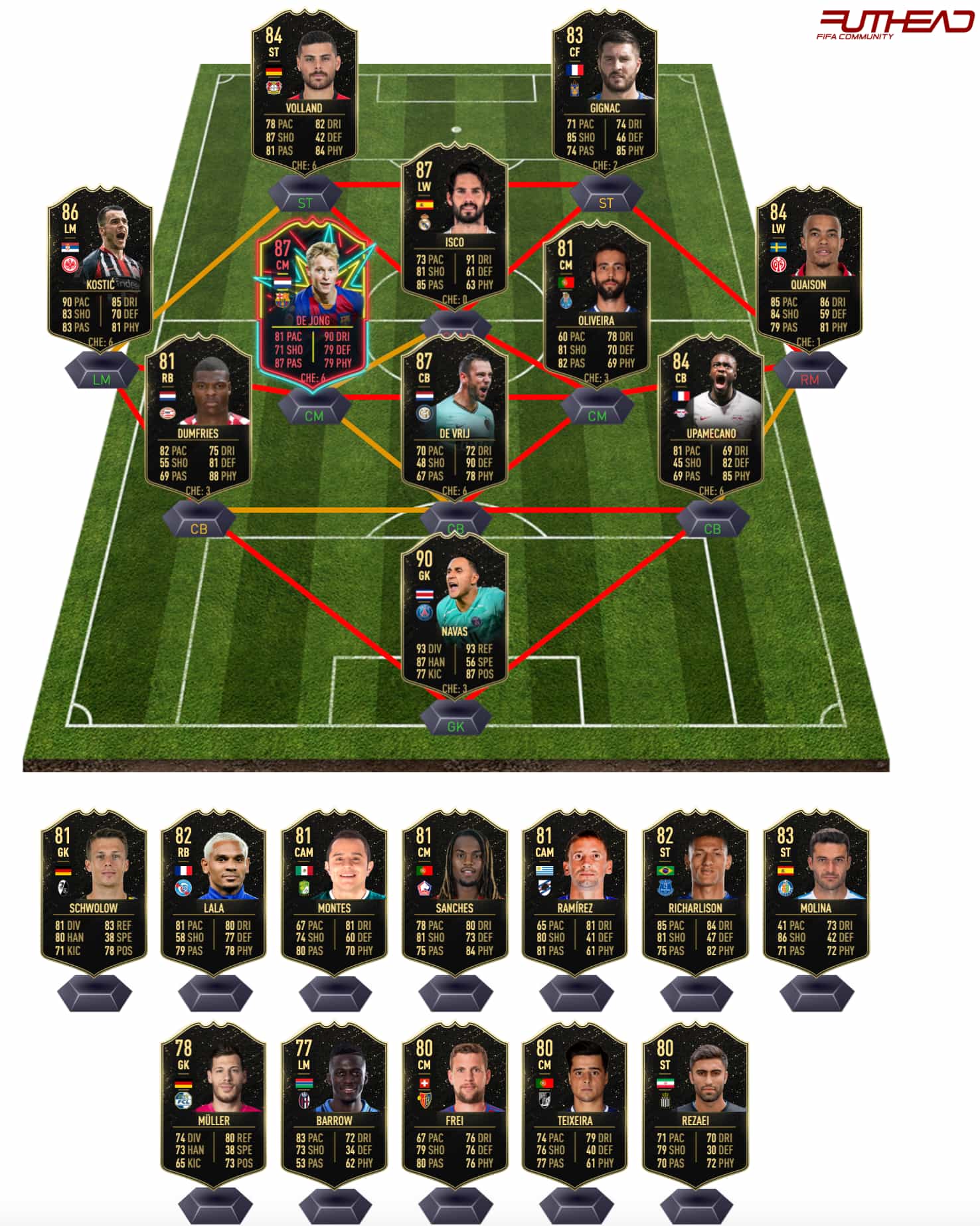 Keylor Navas - GK - OVR 87 With two sets of fixtures being played in Ligue 1 this week there are a lot of options to select from. One of which comes with Keylor Navas who could be about to pick up his third IF of the year. The Costa Rican made a total of four saves to ensure that PSG came out as 2-1 winners over Nantes, claiming an 8/10 from L'equipe.

Stefan De Vrij - CB - OVR 84 It was the weekend of Inter Milan facing off against rivals, AC Milan. When looking at the form this season almost everyone expected three points for Inter and it is exactly what they got. The match was one for the viewers with Inter winning 4-2 and from that match it was De Vrij who picked up MOTM with an impressive 8/10 for his performance which included a goal.

Dayot Upamecano - CB - OVR 77 There is a slight risk with this one seeing as though Dayot only picked up his first IF in week 19 but a three week gap has occurred before and thus with him claiming MOTM in such an important fixture I can see him being included again. It was important of Leipzig not to lose this match and thus with a 0-0 draw away at Munich they will come away happy.

Denzel Dumfries - RB - OVR 78 The Eredivisie was difficult to get match ratings for due to the number of Postponed games but PSV were one side that managed to play. They ended up recording a convincing 3-0 win over Willem, who are actually above them in the table. Dumfries scored the first of those three goals which could be enough for his inclusion.

Filip Kostic - LM - OVR 82 Frankfurt look to be getting back to the form they were at during the beginning of the season and another strong performance saw them beat Augsburg 5-0 at home. There are a couple of good candidates but none are better than Kostic who scored twice and assisted another two.

Sergio Oliveira - CM - OVR 78 It was a must win game for Porto who hosted Benfica this week with a 7 point gap at the top previous to this match, had they failed to win it was all but confirmed that Benfica would go on to win the title. They managed to keep things interesting though with a 3-2 home win. Oliveira scored one of those three goals and claimed MOTM with an 8/10.

Robin Quaison - LW - OVR 75 Quaison managed to pick up Kickers player of the week after dominating the Mainz v Hertha match by scoring three goals. Mainz went on to win the match 3-1, taking them four points away from the relegation zone.

Frenkie De Jong - CM - OVR 85 We are going to see a lot of predictions favour Messi here for his three assists but I just can't see the Argentine being awarded a TOTW spot for that. Instead I feel as though it will go the way of either De Jong or Busquets. I have favoured the Dutchman with the OTW factor playing a part.

Isco - LW - OVR 86 There were very few big name players to include this week and it's therefore inevitable that a couple will be forcefully included by EA. I feel that one of those could be Isco, with a lack of Spanish options alongside him being one of the only golds to feature in their TOTW. The Spaniard picked up MOTM for Madrid after scoring their opening goal in a 4-1 away win over Osasuna.

Kevin Volland - ST - OVR 82 One of the most exciting games of the weekend came with Leverkusen hosting Dortmund. The home side came away with a 4-3 win and with Volland scoring two of those four goals he should finally be in line for an IF.

Andre-Pierre Gignac - CF - OVR 80 This one can be classed as either a CAM or CF but regardless of that I feel that under the circumstances it is an IF that will still happen. Gignac scored twice in Tigres' 3-0 home win, which was a well needed three points after a poor start for them.

Alexander Schwolow - GK - OVR 78 As is often the case we have included the best keeper in Germany for the week after Schwolow made a total of six saves in keep Frieburg's clean sheet in tact, allowing them to come away with a 1-0 win.

Kenny Lala - RB - OVR 79 Defenders were few and far between this week and thus although Lala wouldn't have usually been considered due to his goal being a penalty I have instead opted for him. He scored the third and final goal of the match during Strasbourg's 3-0 home win.

Gaston Ramirez - CM - OVR 78 Serie A was one of the few leagues that managed not to postpone any of their fixtures this weekend and as a result are likely to pick up several IFs. One of those looks to be Sampdoria's Ramirez after the Uruguayan scored two of their three goals in a 3-1 away win over Torino.

Luis Montes - CAM - OVR 75 Club Leon continued their good form to start the season with a 3-1 home win over Montterrey, a result which sees them remain in first position. Montes played a bug role in the result, scoring twice and assisting another.

Renato Sanches - CM - OVR 75 Sanches has been snubbed on numerous occasions for TOTW this year and once again he is a fringe option. Since joining Lille the Portuguese midfielder has shown why there was so much hype surrounding him, this week he scored once in Lille's 2-0 win and claimed an 8/10 from L'Equipe.

Richarlison - ST - OVR 79 I highly doubt that the Premier league will be ignored but with just three games taking place it is difficult to select players to represent the division. I have forced a couple of players in though, Richarlison being one of them after a magnificent solo goal from the Brazilian helped them to record a 3-1 win.

Jorge Molina - ST - OVR 80 Only a few players managed to score more than once this week and thus those who have managed it were always likely to be selected for this side. Molina was one of those, after scoring twice in an impressive 3-0 win over Valencia for Getafe.

Marius Muller - GK - OVR 70 I have two players selected from the Swiss division this week which could be pushing it but both put in outstanding performances. Muller is the first after he made an astonishing 13 saves to keep his clean sheet in Luzern's 1-0 win over Xamax

Joao Teixeira - CM - OVR 72 With the lack of hat tricks continuing for the reserves section it remains a free for all with the section being very difficult to predict. There were several options with two goals and one assist but for me Teixeira has the edge due to the final score of the match. Guimaraes ran away as 7-0 winners and thus I can't see the match being ignored.

Musa Barrow - LM - OVR 69 There were some big upsets in the Italian league this week, one of them being Bologna winning 3-2 away at Roma. Barrow looks to be the player likely to pick up an IF from it despite only being a silver item, after he scored twice and assisted the other.

Fabian Frei - CM - OVR 74 Once upon a time this fixture was a very big match in Switzerland but with Zurich now dropping off its a game that Basel are expected to win. That's exactly what they did, recording a convincing 4-0 home win. Frei scored three of those goals which nails him on for this side.

Kaveh Rezaei - ST - OVR 72 We end the week with a hat trick over in Belgium with Rezaei scoring three of Charleroi's four goals in their 4-0 home win over Waregem.