FIFA 20 Team of the Week 21 Predictions

Published on by Aarong222 82 Comments 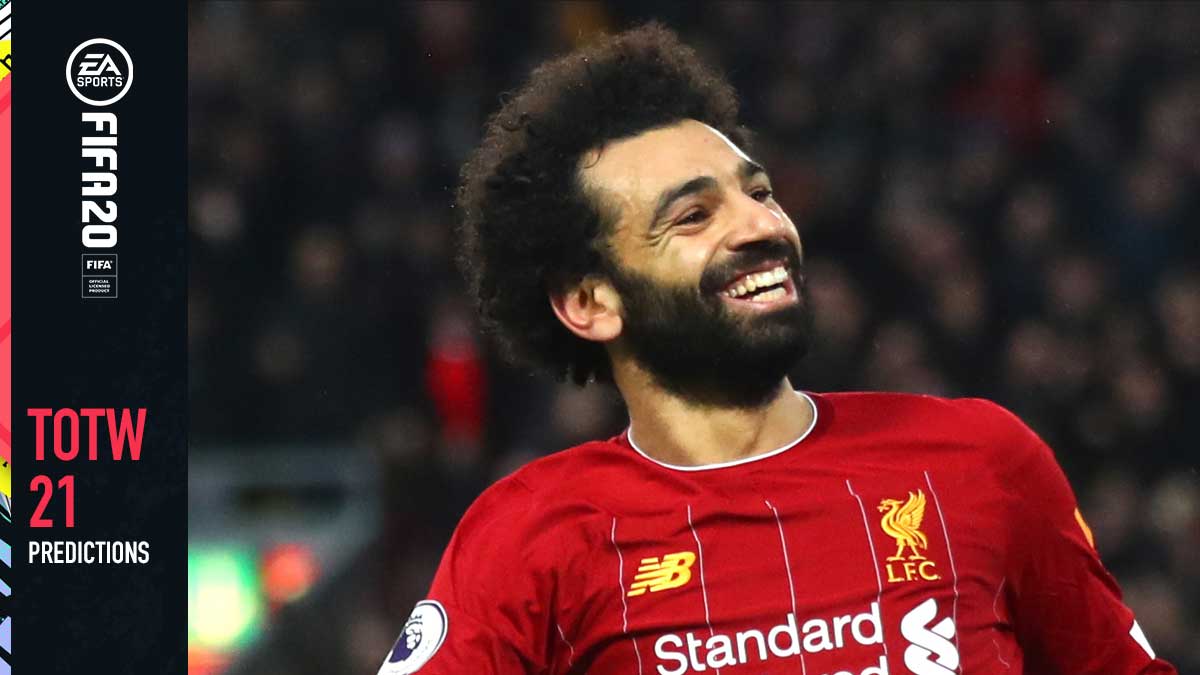 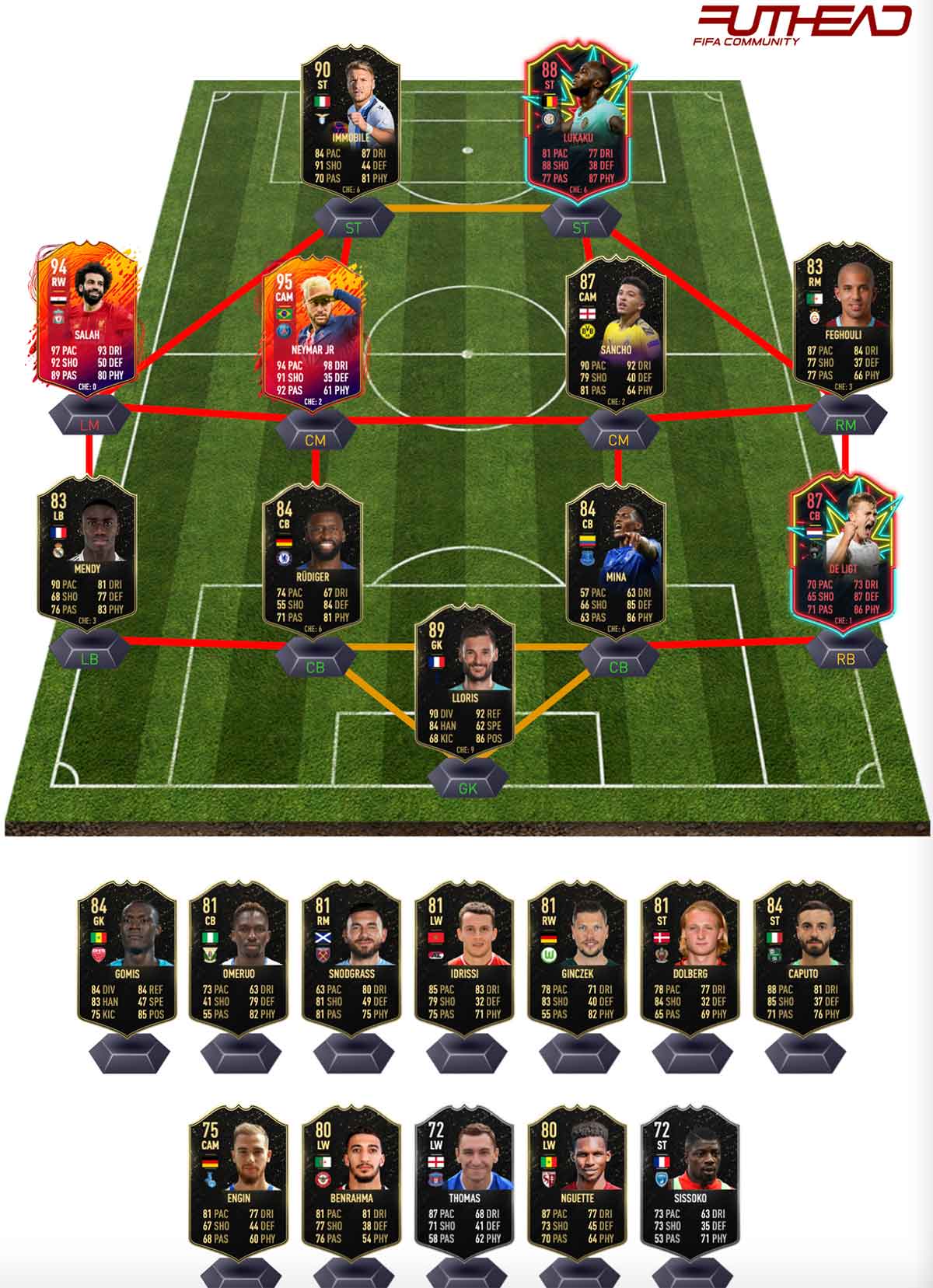 Hugo Lloris - GK - OVR 88 Tottenham had been without Lloris for a long time due to his injury and Gazziniga had slotted in well. Now that the Frenchman is back however he jumped straight back into the side with a difficult match up against Man City. Lloris excelled though and made a total of five saves, one of which was a penalty in their impressive 2-0 win.

Antonio Rudiger - CB - OVR 82 The defenders with two goals to their names just keep on coming in recent times and there were another two from the Premier League alone this week. The first was Rudiger who scored both of Chelsea's goals in their 2-2 draw with Leicester. Although they only managed to pick up one point I am confident that Rudiger will still be selected on Wednesday.

Yerry Mina - CB - OVR 78 The other Premier League defender with a brace was Yerry Mina, who is known for his ability up the other end. Mina's goals resulted in Everton recording a 3-2 away win over the in form Watford and additionally the Colombian was impressive at the back, managing to keep Troy Deeney quiet which right now is no easy task.

Matthijs De Ligt - CB - OVR 85 There were a lot of defensive options this week which could lead to an extra defensive spot in TOTW, at least that is what I am hoping for. De Ligt claimed MOTM in Juventus's 3-0 home win over Fiorentina, scoring one of the three goals.

Ferland Mendy - LB - OVR 80 With La Liga having only a couple of suggestions towards TOTW I can see EA forcing in a player from Real Madrid's 1-0 win over Atletico. Mendy is the obvious choice for that with the Frenchman assisting the only goal of the game and picking up a spot in Marca's TOTW.

Sofiane Feghouli - RM - OVR 80 Feghouli seems to be a very hit and miss player, especially when it comes to his finishing. The Algerian obviously had his shooting boots on this week though as he scored twice in Galatasaray's 4-1 home win.

Neymar - CAM - OVR 92 It's getting to the point where Neymar can be predicted week in week out and once again the Brazilian was fantastic for the French champions. He only has an assist to his name but after claiming MOTM as well in their 5-0 win with an 8/10 the fact that he has been snubbed a couple of times already recently could work in his favour.

Jadon Sancho - CAM - OVR 84 Dortmund scored five for the third game in a row, this time without reply to beat Union Berlin 5-0. Sancho picked up MOTM with a goal and an assist making him the likely player to receive the IF but his position is the talking point and could be selected as either a CAM, A RW or even a RF depending on how EA view it.

Mohamed Salah - RW - OVR 90 Salah looks to be back at his best as of late and with Mane out injured it is needed more than ever. Liverpool continued to win game after game with a 4-0 win over Southampton being the latest three points. Salah scored two of those three goals and with a headliner item to his name I can see EA utilising that.

Ciro Immobile - ST - OVR 86 If EA do decide to go with Immobile it would be the fourth IF he has picked up this season and with only three players managing to pick up three to this stage, Immobile included. It could be a push for him this early on. That being said with two goals and one assist to his name the Lazio goalscorer does deserve a spot in this side.

Romelu Lukaku - ST - OVR 85 The Lukaku we are seeing at Inter Milan this season is on another level. The Belgian had been disappointing for United for a while before making the move but something has since clicked and we are back to seeing Lukaku at his best. He scored another two this weekend allowing Inter to go on and win 2-0.

Alfred Gomis - GK - OVR 75 There were two goalkeepers in with a strong shout from Ligue 1 with both Gomis and Mandanda picking up an 8/10 from L'Equipe. With Gomis being selected in the actual TOTW he looks to be the better shout though and after making four saves to keep his clean sheet in tact he continued his impressive season for Dijon.

Kenneth Omeruo - CB - OVR 75 I could have easily ignored everything to do with the Spanish leagues this week but I dont feel as though thats an option and thus I have forced a couple in. Omeruo being one of those after he scored Leganes's first goal in a 2-1 win. A performance which Marca deemed as a perfect three stars.

Robert Snodgrass - RM - OVR 76 There were a lot of strong performances in the Premier League this week with no less than five players making my prediction. The fifth is Snodgrass who played a large part in West Hams 3-3 draw with Brighton. Although the Hammers will be disappointed not to gain all three points, Snodgrass's two goals and one assist is unlikely to go ignored.

Oussama Idrissi - LW - OVR 75 A few people will be calling for Promes and although its not impossible I don't think I can include him for a single goal, even with it being a big game. Idrissi seems to be the best shout from the Eredivisie after he scored twice in AZ's 4-0 win to claim player of the week.

Daniel Ginczek - RW - OVR 78 The candidates from Bundesliga looked straight forward this week which made my life easier. Ginczek played out wide rather than centrally for Wolfsburg this week and rewarded them by scoring twice during their 4-2 away win over Paderborn.

Kasper Dolberg - ST - OVR 76 There was a lot of hype surrounding Dolberg while he played at Ajax but a low profile move to Nice is what he obtained in the end. That being said he is still only 21 so has a lot of time ahead of him. He scored twice in their latest 2-1 win which came over Lyon. L'equipe awarded him an 8/10 which is more than enough for an inclusion.

Francesco Caputo - ST - OVR 75 Serie A offered very few options this week but with Sassuolo shocking Roma with a 4-2 win I feel as though someone from the home side will be included. Caputo looks to be the only real choice after he scored twice from striker and claimed a 7.5 match rating from Gazzetta.

Ahmet Engin - CAM - OVR 68 We head down to the third division of Germany for our first reserve selection with Engin claiming POTW for his performance in Duisburg's 4-1 win. The German both scored twice and assisted twice to help his side pick up all three points.

Said Benrahma - LW - OVR 74 Benrahma is often within the goals for Brentford but seeing as though he is a silver item the first was always going to be difficult to pick up. That first is all but confirmed now though after the Algerian scored three goals for Brentford in their 5-1 away win over Hull City.

Nathan Thomas - LW - OVR 64 With this match falling on a Tuesday alongside the fact that Thomas is a bronze Item EA could easy go the route of snubbing him. That being said he should walk his way into the side realistically after he scored three goals from LW for Carlisle in their 4-1 away win over Forest Green.

Opa Ngeutte - LW - OVR 72 This was one of the final spots to select for my side with a very long debate between both Ngutte and Pentke taking place but with my history on silver goalkeepers being very bad I ended up going with Nguettes two goals and one assist. His performance saw him claim an 8/10 which I can see being enough here.

Ibrahim Sissoko - ST - OVR 64 Another bronze item now with Sissoko. Chamois played out an enthralling 4-4 draw with Paris from which the French striker managed to score three of his sides four goals within.