FIFA 20 Team of the Week 20 Predictions

Published on by Aarong222 64 Comments 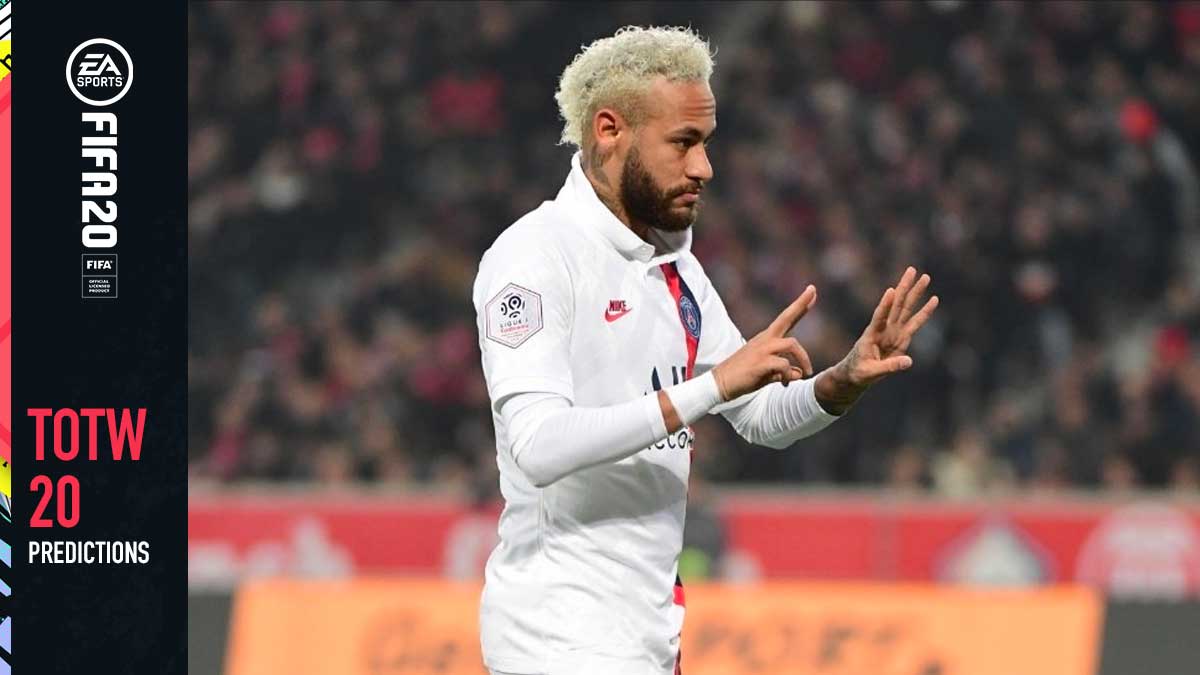 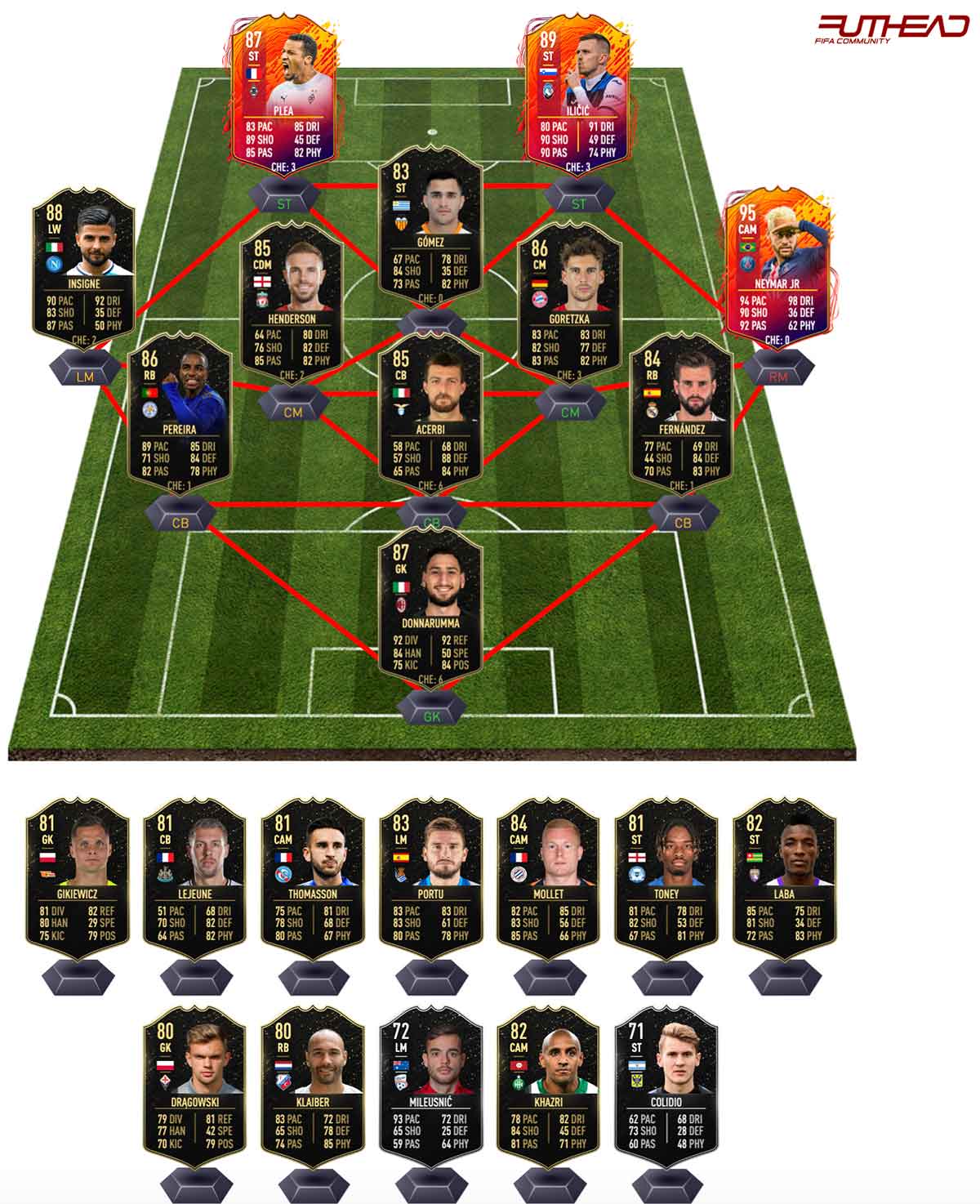 Ed. note: The items signified by Headliners merely have those versions. Lower-rated (one upgrade below) IF versions would be the ones in packs during TOTW 20.

Gianluigi Donnarumma - GK - OVR 85 Im surprised that Donnarumma has only picked up one IF so far this season with several chances to collect the second. This is perhaps the strongest shout though after the Italian made a total of seven saves to keep his clean sheet in AC Milan's 1-0 win over Brescia. Gazzetta awarded him with a 7.5 match rating which should stand out.

Ricardo Pereira - RB - OVR 82 There are three serious TOTW contenders from Leicester this week with Barnes picking up a goal and assist from one wing while Perez scored two from the other. I have instead opted for the defensive option in Pereira though after he also scored once and assisted another in Leicester's 4-1 home win over West Ham.

Francesco Acerbi - CB - OVR 83 There are a seriously high amount of defensive options this week but I am still confident on those I have selected. Acerbi is the next to make my side after the Italian scored Lazio's goal in their 1-1 away draw with Roma. Acerbi has been knocking on the door in recent weeks as well which will only work in his favour for this side.

Nacho Fernandez - RB - OVR 82 Annoyingly Fernandez played out in a RB position which does kill his potential IF in terms of usability but still the Spaniard is likely to be selected for this weeks team after he scored the only goal of the game as Madrid struggled to a 1-0 away win over Valladolid.

Lorenzo Insigne - LW - OVR 87 Napoli have not performed well at all this season, sitting in a midtable position and thus hosting Juventus was never likely to be an easy task. It was one they excelled at though, managing to come away as 2-1 winners. Insigne scored the second of those two goals and claimed an 8/10 for his performance.

Jordan Henderson - CM - OVR 83 Its not often that Henderson is involved on the offensive side but the English CM played a part in both Liverpool's goals during their 2-1 win over Wolves. He scored the opener before assisting Firmino to finish off the job.

Leon Goretzka - CAM - OVR 84 Munich put in a very convincing performance against Schalke, coming away as 5-0 winners. Several players performed well, as you would expect in such a result but it was Goretzka who stood out enough for a selection, with both a goal and an assist to his name.

Neymar - CAM - OVR 92 Neymar was snubbed last time around due to the release of his headliner item and once again is in a similar boat but at the opposite end of the spectrum. The Brazilian added another two goals to his tally and looks to be back at his best, helping PSG to come away with a 2-0 win away at Lille.

Josip Ilicic - ST - OVR 84 Although Ilicic has recently picked up a headliners item with an upgrade being beneficial to those who have recently acquired the item and thus I can still see him making the cut for TOTW. Atalanta demolished Torino 7-0 away from home with the Slovenian scoring three of those goals. Palomino and Gomez are the alternatives if EA feel it is too soon but with an 9/10 I cant see Josip missing out.

Alassane Plea - ST - OVR 81 Another headliner option now with Gladbach's striker, Plea. The Frenchman scored twice for them in their 3-1 home win and his overall performance was enough to see him awarded Germany's player of the week with a perfect 1 match rating from Kicker

Maximiliano Gomez - ST - OVR 80 Valencia recorded an impressive 2-0 win while hosting Barcelona, a result which I doubt will go unnoticed. Some sources have Gomez down as one goal with the other being a Jordi Alba own goal while others have him down as scoring both. Either way he played a big part in both goals and thus I feel he is the most likely option.

Rafal Gikiewicz - GK - OVR 75 The second goalkeeper choice was a difficult one to make with very few standing out. Sommer was the main keeper in the Bundesliga but with Plea seemingly nailed on that all but rules him out. Instead we fall back to Union Berlin's Gikiewicz, who made a total of seven saves in their 2-0 win.

Florian Lejeune - CB - OVR 78 Theres actually a good chance that Lejune could be snubbed due to his minimal gametime, alongside the fact that he didn't actually pick up MOTM from any sources, presumably linked to the lack of game time. That being said I just can't ignore what he managed to do. With Everton leading 2-0 Newcastle made a defensive change but he turned out to be the attacking threat they needed scoring in both the 94th and 95th minute to help snatch a 2-2 draw.

Adrien Thomasson - CAM - OVR 76 Strasbourg were heavy underdogs when they travelled to Monaco but performed as if they were the favourites. The away side came away with a convincing 3-1 win with Thomasson scoring one of those three and claiming MOTM with an 8/10.

Portu - LM - OVR 80 With a lot of low scores occurring over in Spain this week it means that the options are limited and thus although Portu claimed an average match rating I can't see his one goal and two assists performance being overlooked. It came during Sociedad's 3-0 home win over Mallorca.

Florent Mollet - CAM - OVR 78 There are a fair few Ligue 1 midfielders in with a shout this week and theres a chance that a couple miss out but they all deserve their spot in this side and thus I have selected all four. Mollet is one of those after he picked up a 7/10 for his goal and assist in Montpellier's 2-1 win over Dijon.

Ivan Toney - ST - OVR 68 The first of two strikers selected which would gain a SIF to go from a silver to an 81+ rated gold is Toney. The Peterborough striker has been a threat all season in League 1 and added another two goals and an assist to his name during their 4-0 win over Wycombe.

Kodjo Fo-Doh - ST - OVR 73 A second hat trick of the season for Fo-Doh is likely to result in a second I for him. The Togo striker is now registered as a gold option and thus increasing the chances of his selection despite the game falling on a Thursday. Al Ain went on to win 3-0 to move them into 2nd position.

Bartlomiej Dragowski - GK - OVR 73 My history has been far from ideal when it comes to non gold keepers but surely Dragowski cant miss out after saving Fiorentina from Genoa causing an upset. The keeper made a total of seven saves with one being a penalty to keep the score at 0-0. Gazzetta awarded him an 8/10 which is a rare score for a keeper.

Sean Klaiber - RB - OVR 73 The Eredivisie didn't offer many options but with a lack of silver options as well Klaiber should surely be selected. The RB scored two of Utrecht's four goals in their 4-0 win claiming the joint highest match rating of the week despite not being selected as player of the week.

Nikola Mileusnic - LM - OVR 63 It was a seven goal thriller between Western united and Adelaide in Australia with the away side coming out as 4-3 winners. LM, Mileusnic scored two of those four goals which makes him stand out for a TOTW selection.

Whabi Khazri - CAM - OVR 79 With the lack of reserve options once again I am playing the numbers game and allowing a gold item to sneak in. It comes with Khazri who scored both St Etienne goals in their 2-1 win. He was snubbed from L'Equipe's TOTW but with a 7/10 was still MOTM from the individual game and stands a good chance as a result.

Facundo Colidio - ST - OVR 63 With no silver or bronze hat tricks occurring this week it leaves the reserves section wide open and also makes the predicting of it very difficult. Colidio managed to pick up three assists and a spot in Belgian TOTW with an 8/10 which could be enough for him.