FIFA 20 Team of the Week 19 Predictions

Published on by Aarong222 96 Comments 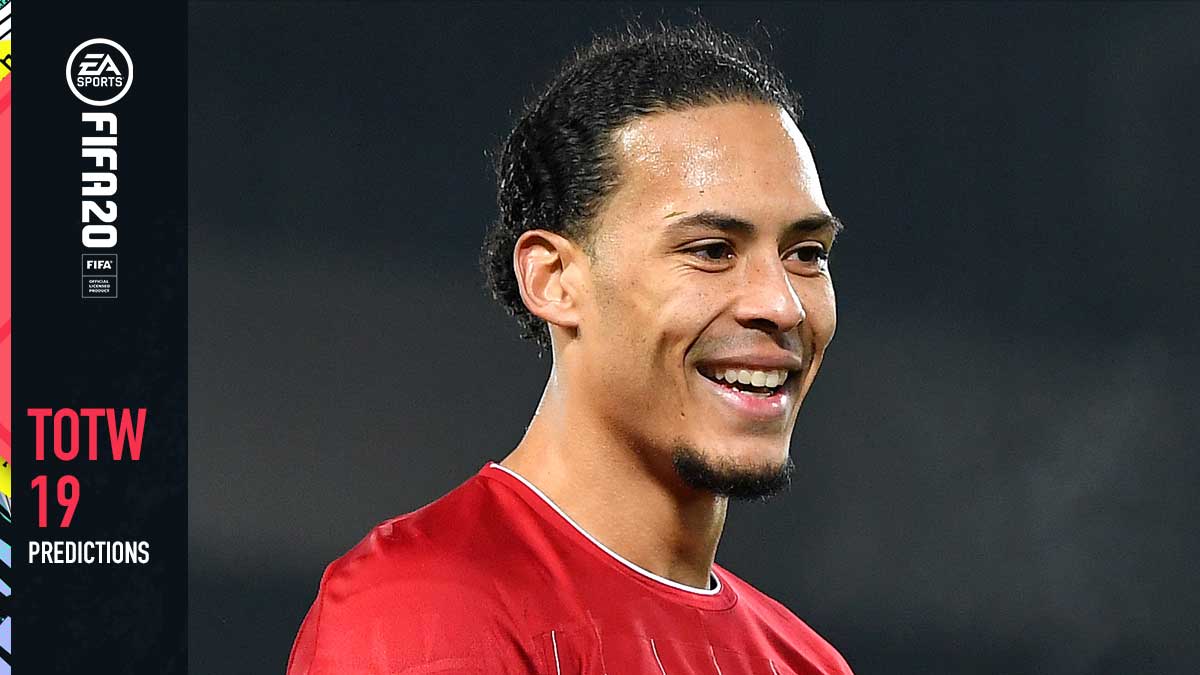 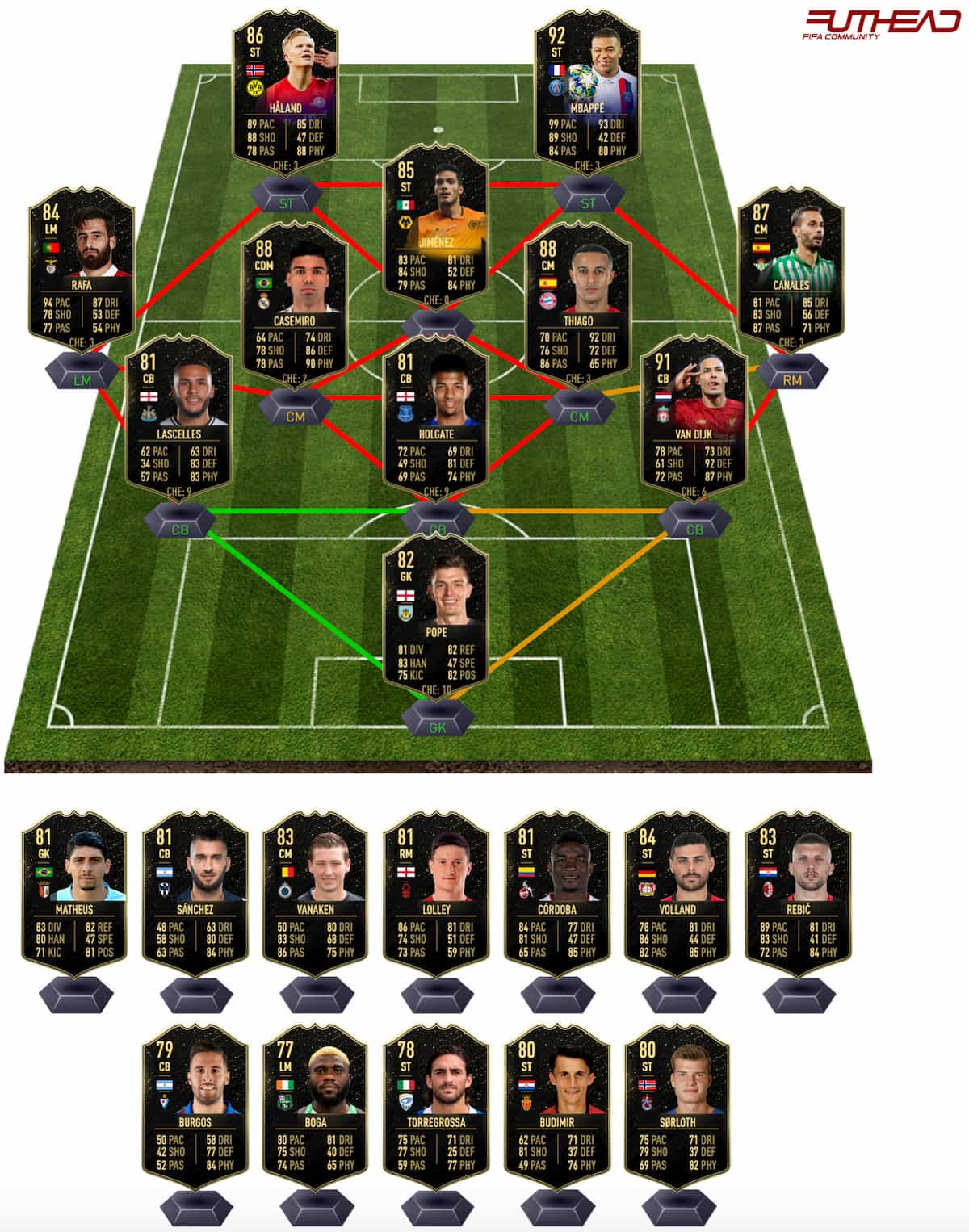 Nick Pope - GK - OVR 79 It appears as though the momentum has well and truly swung away from the Leicester camp with results slowly diminishing. Burnley were the latest side to upset them with goalkeeper, Nick Pope, being influential towards that. The England stopper saved a penalty alongside making seven other saves to secure his spot in my side.

Virgil Van Dijk - CB - OVR 90 Once again Van Dijk stepped up during a big match to show why he is regarded as the worlds best CB. The Dutch defender scored the opening goal in Liverpool's 2-0 win over Manchester United and was as solid as ever at the back to help keep his clean sheet in tact.

Mason Holgate - CB - OVR 75 Although Everton only managed to pick up one point against West Ham in their 1-1 draw away from home, Holgate managed to stand out from the back. He was influential at both ends of the pitch, assisting the only goal for Everton alongside making a goal-line clearance. He went on to pick up MOTM and with a lack of defensive options I can see him sneaking in.

Jamaal Lascelles - CB - OVR 78 A third Premier League defender is potentially pushing it but with a lack of other options available to us alongside the fact that Newcastle will likely pick up an IF for their win over Chelsea makes me lean towards Lascelles. The CB was crucial in helping Newcastle maintain their clean sheet with a total of eleven clearances.

Rafa - LM - OVR 82 I honestly have no idea on where Rafa actually came on to play but regardless of his position I feel that he will be included in TOTW. The Benfica midfielder came off the bench against rivals Sporting Lisbon to score twice and help them towards a 2-0 win.

Thiago - CM - OVR 87 I have seen numerous punts on Munich players this week in various predictions but there is only one in with a chance in my eyes and that is Thiago. The Spaniard picked up MOTM for his overall performance, which included a goal in Munich's 4-0 away win over Hertha.

Casemiro - CDM - OVR 87 Real Madrid came out as 2-1 winners while hosting Sevilla on Saturday and it was an unlikely goalscorer for both the goals with Casemiro scoring both their goals from CDM. Marca awarded him a perfect three star match rating making him one of the better candidates for this side.

Canales - CM - OVR 84 Canales completes a strong looking midfield after both scoring and assisting once for Betis in their 3-0 win. MARCA awarded him a three star performance rating and with this potential IF being an 87 rating I can't see him missing out.

Raul Jimenez - ST - OVR 80 You could argue a case for Adama Traore getting a selection but even though in works in favour for his Headliner SBC I can't see him getting in just yet. Instead I am opting for Jimenez who scored twice in a 3-2 comeback win over Southampton for Wolves.

Kylian Mbappe - ST - OVR 89 This one could go two ways with both Mbappe and ADM picking up an 8/10 but with just a single assist for Di Maria I can't see Mbappe's two goals being snubbed, especially when you consider it's a big name. The TOTY factor shouldn't change anything considering that their ratings are so much higher.

Erling Braut Haland - ST - OVR 73 With the score at 3-1 to Augsburg on came Haland, in place of Piszczek to try and salvage something from the match. We always knew that the youngster had talent but the Norwegian exceeded what was expected, scoring three goals in order to help Dortmund recover the match and go on to win 5-3. Simply amazing stuff.

Matheus - GK - OVR 76 When Porto lose its often the case that the opposing side picks up an IF and in this case there is an obvious shout. It comes after Porto missed two penalties, one which was saved and the other coming off the woodwork. In total Matheus made 4 saves to help Braga come away with a 2-1 surprise win over Porto.

Nicolas Sanchez - CB - OVR 76 The amount of times Sanchez has been snubbed for TOTW this year is ridiculous. He scored two goals this weekend, which is not the first time it's happened this year and although Monterrey failed to win the match Sanchez really should be making the cut.

Hans Vanaken - CM - OVR 80 Although Anderlecht have dropped off this season, sitting in midtable as it stands, when playing Club Brugge it still classifies as a big game. Brugge came away with an expected in, winning 2-1 with Vanaken scoring both those goals.

Joe Lolley - RM - OVR 75 I almost overlooked Lolley simply for the fact I didn't realise he was a gold option. Thankfully I spotted that he was a low gold and thus he seems to be a viable option after scoring twice for Nottingham in their 3-1 win over Luton.

Jhon Cordoba - ST - OVR 76 I nearly snubbed Cordoba in place of Horn but considering that Cordoba was the official MOTM alongside the fact that there are several goalkeeping options I couldn't quite justify it in the end. Two goals from the Colombian forward saw Koln come away with a 3-1 win over Wolfsburg, lifting them three points above the relegation zone.

Kevin Volland - ST - OVR 82 There were multiple striker options from the Bundesliga this week and it's actually quite difficult to select between them. Volland is in with a good shout though after he scored twice in Leverkusen's 4-1 away win over Paderborn, to claim MOTM with a 2 match rating from Kicker.

Ante Rebic - ST - OVR 80 There is an outside chance of a third IF going to way of Theo Hernandez however I feel as though Rebic has a higher chance of receiving his first instead. The Croatian came off the bench to score twice in Milans 3-2 win over Udinese with the winner coming late into injury time.

Esteban Burgos - CB - OVR 71 Eibar were impressive this weekend, recording a comfortable 2-0 win over Atletico Madrid, such a result that I expect them to be rewarded with an IF. The only real choice comes with Burgos, the only problem being that he is a silver item. That being said with a lack of silver options he still stands a chance of making it into the side.

Jeremie Boga - LM - OVR 72 I feel as though this is a free slot with pretty much anyone who has scored being able to slot in but with a high match rating from Gazzetta I can't ignore Boga's goal and assist despite being a silver with just one goal and one assist. His performance came in Sassuolo's 2-1 win over Torino.

Ernesto Torregrossa - ST - OVR 70 With a lack of hat tricks occurring this week it gives the chance for some silver inclusions from the higher divisions. One of those in with a good chance of naming TOTW is Torregrossa who scored twice in Brescia's 2-2 draw with Cagliarli. The Italian picked up an impressive 8 match rating from Gazzetta which should stand out.

Ante Budimir - ST - OVR 72 There a couple of selections which have a gold v silver selection decision and on both I have opted for the silver. The first of those two come with Budimir who scored twice and assisted another in Mallorca's 4-1 win. Sevilla is the other option, assisting two from CM.

Alexander Sorloth - ST - OVR 73 I almost opted to snub Sorloth in favour of Nwakaeme but with a limited number of hat tricks available while plenty of gold mids were available, Sorloth seemed to be the logical selection. He scored three of Trabzonspor's 6-0 home win.