FIFA 20 Team of the Week 18 Predictions

Published on by Aarong222 66 Comments 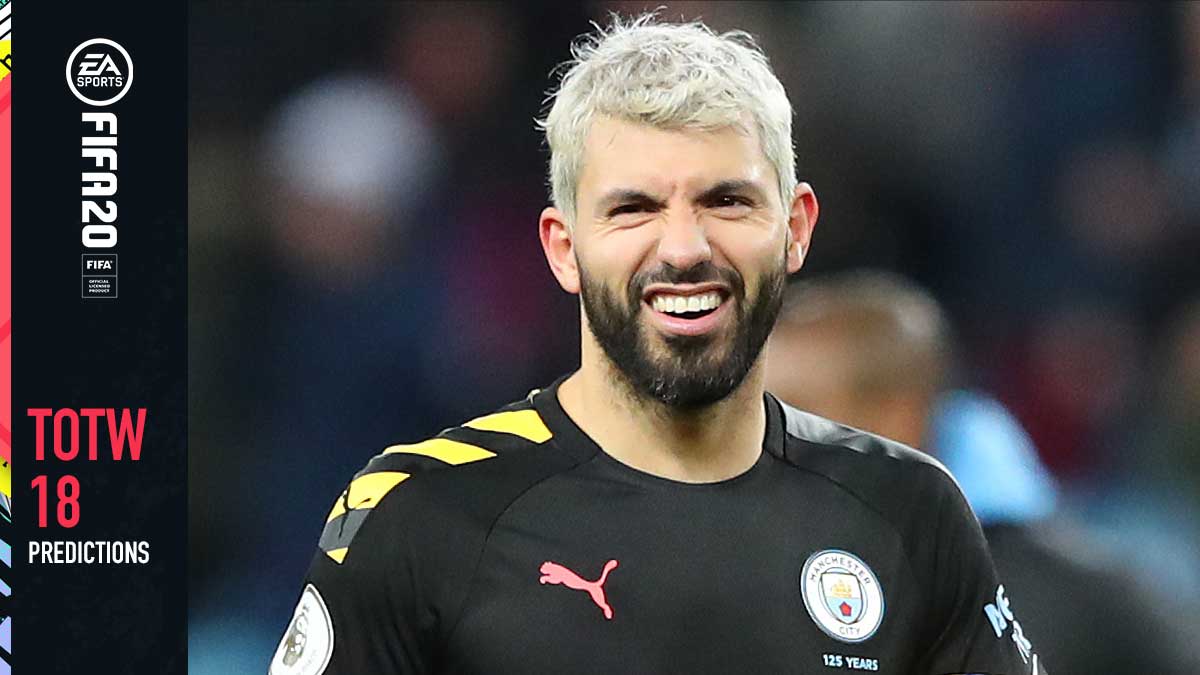 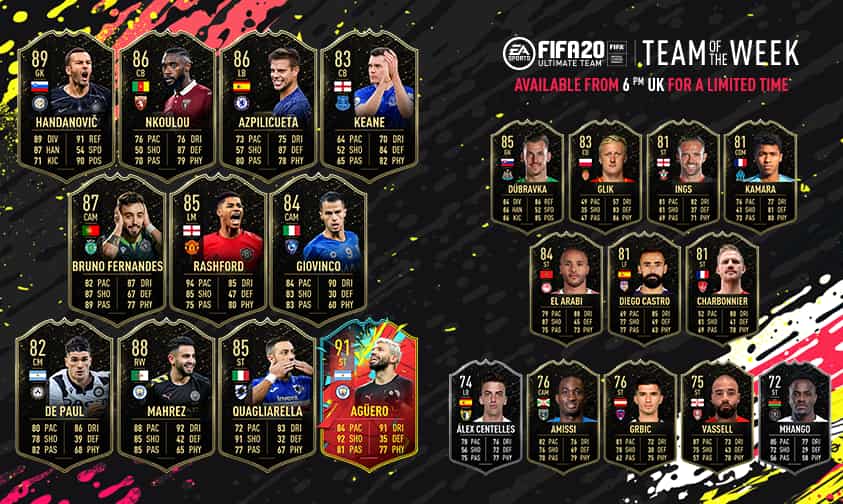 Samir Handanovic - GK - OVR 88 Once again we are faced with a limited set of fixtures with Germany on their international break and Spain with a set of cup fixtures. Thus I am expecting a side consisting of mainly Serie A, Ligue 1 and Premier League selections. Handanovic is the first player to make my side after saving a late Muriel penalty, on top of five other saves to help Inter pick up a point in their 1-1 draw with Atalanta.

German Pezzella - CB - OVR 79 This is an annoying one as Gazzetta gave Pezzella an average match rating of 6.5, which in my eyes is not enough. However, with him scoring the only goal on the game in Fiorentina's 1-0 win, I simply can't ignore him with the limited options I have to select from.

Nicolas Nkoulou - CB - OVR 81 The defensive options were few and far between this week and thus there is always likely to be a surprise or two. One punt I am taking is on Nkoulou, who has a strong history of generous selections from EA over the years. Torino came away with a 1-0 win with Nkoulou registering MOTM with a 7/10.

Andre Almeida - RB - OVR 81 With several top leagues out of action it offers an opportunity to the Portuguese division to pick up a few IFs one I can see happening this week is Benfica's Almeida. The RB scored one of their two goals in a 2-1 win over Aves with his late winner separating the two sides.

Marcus Rashford - LM - OVR 83 There are two ways of going about the Manchester United win following their 4-0 win over Norwich and despite the temptation to go the niche route of Mata who picked up two assists I have opted for the popular decision of Rashford, who scored two of the four goals.

Bruno Fernandes - CAM - OVR 85 I'm surprised that Fernandes is yet to pick up an IF this year when you consider how much he does for the side each week. The Portuguese midfielder scored another two this week during Lisbon's 3-1 away win which should be enough for his inclusion.

Neymar - CAM - OVR 92 Although Neymar picked up his first IF just three weeks ago I am willing to take the risk that the gap is enough and that we see him feature again this week. The Brazilian was crucial for PSG in their rival match against Monaco and although they only managed to come away with one point, two goals for Neymar should be enough for his inclusion.

Riyad Mahrez - RW - OVR 84 With Aguero picking up the undeserved IF for his single goal against Sheffield United we could see him snubbed despite scoring a hat trick. Another option with a strong possibility of making the side in Mahrez though after he scored twice and assisted another in City's 6-1 demolition of Aston Villa.

Fabio Quagliarella - ST - OVR 83 You simply have to respect what Quagliarella manages to do. The Italian is now 36 years of age and still continues to score on a regular basis in Serie A. He has managed to feature in TOTS the past two years and although its now unlikely that he will make it three in a row he still gets a lot of respect. His latest performance saw him score twice for Sampdoria in their 5-1 home win over Brescia.

Sergio Aguero - ST - OVR 89 Under normal circumstances I would have snubbed Aguero but with the Argentine breaking two records, both the most Premier League hat tricks and the highest overseas goalscorer, I expect him to make the cut as an record breaking item. As previously mentioned City beat Villa 6-1 and Aguero scored three and assisted another in that match.

Wissam Ben Yedder - ST - OVR 83 It's not often that we see two players from opposites sides feature in TOTW but with PSG and Monaco playing out an enthralling 3-3 draw in a week with minimal fixtures being played I couldn't ignore either Neymar nor Ben Yedder. The Monaco striker picked up an 8/10 from Gazzetta for scoring one and assisting another.

Alfred Gomis - GK - OVR 75 I was shocked to see that L'Equipe opted to not go for Gomis in their TOTW but with the Senegal stopper claiming the same match rating with a 7/10 I can overlook that, especially after you consider that he was crucial in Dijon's clean sheet to hold onto their 1-0 scoreline at home to Lille with 10 men, making six saves in total.

Rodrigo Javier De Paul - CM - OVR 78 With a limited number of defenders to choose from alongside the fact there were far too many midfielders I decided to play the numbers game and instead include another midfielder. De Paul is the player making the cut after picking up an impressive 7.5 from Gazzetta for his goal.

Angel Mena - RM - OVR 76 With the Mexican league rejoining the action I fully expect EA to force at least one player into their side. Thankfully that option is seemingly a straight forward one with Mena scoring twice from RM in a 3-1 home win for Club Leon.

Maxwell Cornet - LW - OVR 76 Lyon fell behind early on to Bordeux but went on to come away with all three points via a 2-1 win. Cornet played a large role in the comeback scoring once and assisting the other. Although he didn't feature in L'Equipe's official TOTW he did pick up a 7/10 which is a high enough rating for an inclusion.

Youssef El Arabi - ST - OVR 77 A second IF looks set to go the way of Olympiakos's striker El Arabi after the In form Moroccan scored another three goals for his side during a 4-0 away win over Lamia. With El Arabi's latest three goals it takes him to nine in his last six matches, a total which makes him one of the most IF strikers in Europe at the moment.

Paulinho - ST - OVR 77 Another selection from the Portuguese division now with Braga's striker Paulinho. I would expect any gold player with more than a goal to feature in this weeks side so with two goals to his name I can't see him missing out. On a normal week it would be unlikely for him to make the cut though.

Gaetan Charbonnier - ST - OVR 75 The only easy selection in France this week comes with Charbonnier, that is after Brest ran away with a 5-2 win while traveling to Toulouse. Charbonnier was a large part of that result with two goals and an assist going his way. L'equipe awarded the performance with an 8/10 making him an easy selection.

Amir Abedzadeh - GK - OVR 72 We have seen a few reserve keepers sneak in lately and once again I can see the same happening with Amir Abedzadeh. The Iranian keeper made a total of eight saves to keep his clean sheet during a 1-0 win. Abola went on to award him an 8/10 which is not a score you see often, especially for a goalkeeper.

Farrend Rawson - CB - OVR 65 When a defender scores twice they are always in consideration for an IF and this is no different. There is the downside of Forrest Green conceding three goals which as a defender is not something to be proud of but with them still coming away with the win, Rawson's two goals are enough for me.

Abdoulaye Doucoure - CAM - OVR 81 I really liked Doucoure to pick up his second IF before I saw that Deeney was awarded MOTM from almost every source possible. That being said I still can't ignore the fact that Doucoure picked up both a goal and an assist in Watford's 3-0 win as they continue their impressive form as of late.

Adrian Grbic - ST - OVR 68 Over to the second division in France now where we find an obvious selection in Grbic. The Austrian striker found the back of the net on three occasions to help Clermont come away with all three points in a closely contested 3-2 home win.

Gabadhino Mhango - ST - OVR 62 Whenever I predict a player from a league such as South Africa I am always worried that EA may overlook the match, especially when you consider that this comes from a Tuesday fixture. That being said after Mhango scored a hat trick for Orlando Pirates in their 4-1 away win he just can't be ignored.