FIFA 20 Team of the Week 17 Predictions

Published on by Aarong222 20 Comments 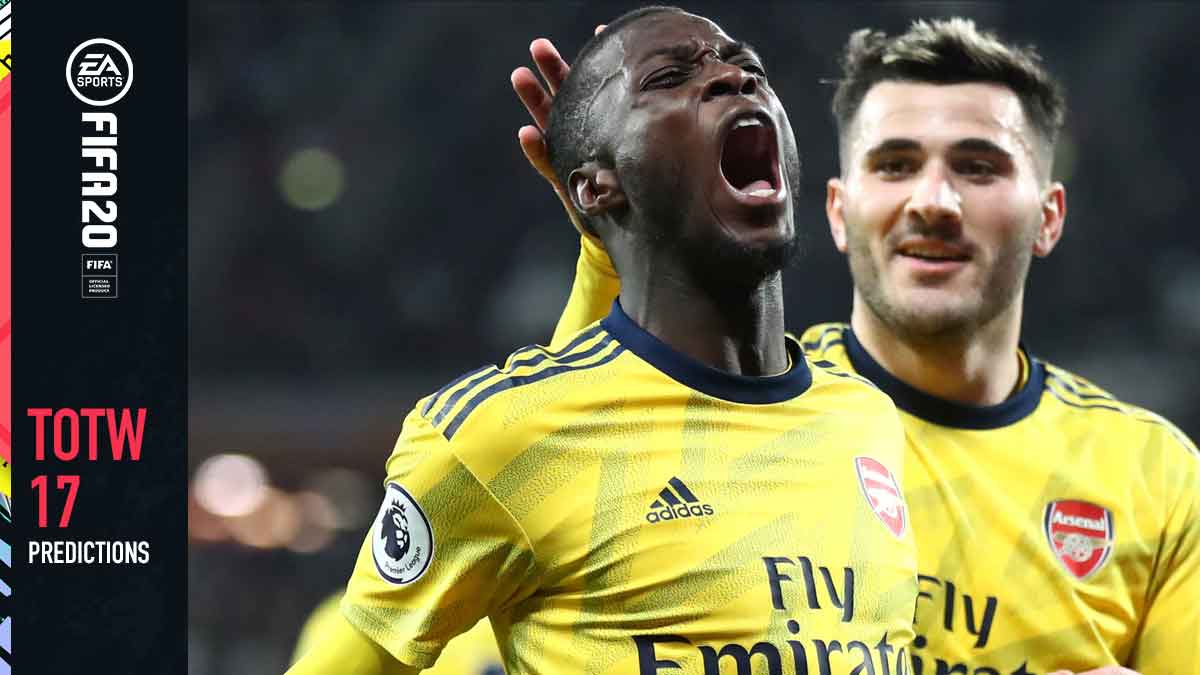 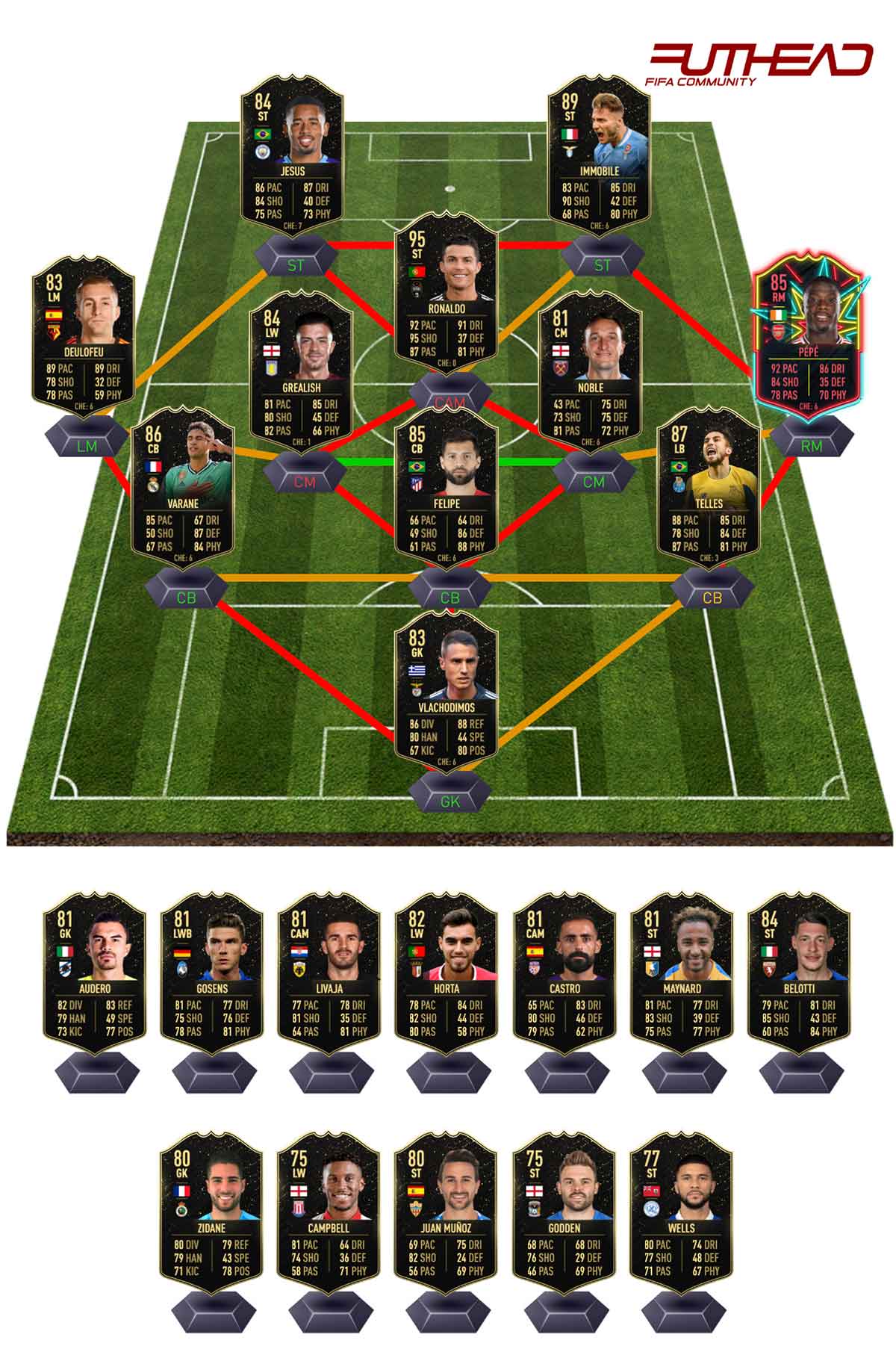 Odisseas Vlachodimos - GK - OVR 80 On Paper a 1-0 win for Benfica over a 10 men Guimaraes looks straightforward but it was anything but that and their Greek stopper can take a lot of the plaudits for this win. In total he made four saves but with a couple of big stops he was awarded an 8/10.

Alex Telles - LB - OVR 84 With limited fixtures being an influence once again this week I would be surprised if a game like Porto v Lisbon went unnoticed and although there is no obvious option Telles picked up an assist and a 7/10, a rating which is often enough for a defender.

Raphael Varane - CB - OVR 85 Although Varane recently picked up his first IF I can see the second coming just four weeks later after the Frenchman scored twice from the back in Madrids 3-0 away win over Getafe. There is potential that one of the two goals has gone down as an OG but even if that was the case I expect Varane to make the cut.

Felipe - CB - OVR 84 There were a lot of selections which could go multiple directions this week, another of those is the Atletico Madrid IF with both Felipe and Correa making a case for an inclusion. I have gone the defensive route with Felipe who scored the winning goal in Madrid's 2-1 win over Levante.

Deulofeu - LM - OVR 80 Deulofeu played magnificently in periods last season but has been rather quiet this season so far. Recent weeks have seen both Watford and the Spaniard perform well, suggesting some correlation. Watford went on to win 2-1 at home to Wolves with Deulofeu scoring one and assisting the other.

Nicolas Pepe - RM - OVR 83 Pepe had few opportunities under previous Arsenal management but Arteta has given him a few now. He seriously impressed during the 2-0 win over Manchester United scoring one of the two goals in a 2-0 win. Sokratis scored the other and is also an option but with Pepe claiming all the plaudits I find it difficult to go elsewhere.

Mark Noble - CM - OVR 76 There are not many names that you would associate to a club these days but Mark Noble and West Ham is definitely one of them. David Moyes sparked something in the side after a shocking run of form from the hammers saw them slide down the table in recent months. With the "new" manager in place they managed to record a 4-0 win over Bournemouth with Noble scoring two of those four.

Jack Grealish - LW - OVR 77 Grealish has been heavily involved in so many of the points Villa have picked up this season and yet again he was heavily influential for them during a 2-1 away win over Burnley, scoring one and causing the other. Had his second goal not have been overturned via VAR there would have been no doubt over this one but seeing as that happened its a 50/50.

Gabriel Jesus - ST - OVR 82 It's no easy task to keep two world class strikers happy and Jesus has had to play second string for most of his time at City with Aguero being the prefered option. When given the opportunity the Brazilian has taken them well though. Another two were added to his tally to help City win 2-1 at home to Everton.

Ciro Immobile - ST - OVR 86 At the rate Immobile is going this season he could easily end the FIFA in the high 90's. His third IF of the year looks set to be on the way after he scored twice in Lazio's 2-1 win over Brescia.

Cristiano Ronaldo - ST - OVR 93 After Ronaldo got snubbed for a TOTY spot, it leaves the door open for a TOTW inclusion. He's the favorite in the 12th man vote, but with him not being in packs until Friday, it's possible he'll be IF before TOTY then IF again (assuming the packs run through Sunday). The Portuguese forward was pivotal in Juventus's 4-0 win at home to Cagliarli scoring three of the four while assisting Higuain for the other. I don't have the ratings for these matches but Ronaldo will be in for sure.

Emil Audero - GK - OVR 77 Monday night saw several Calcio A games take place which although are difficult for TOTW selection purposes are likely to be considered by EA for the upcoming side. Audero is one who looks set for TOTW 17 after making a total of eight saves to deny AC Milan and Ibra's return to Italy with a 0-0 draw.

Robin Gosens - LWB - OVR 76 Atalanta made it back to back 5-0 wins with their most recent one coming against Parma. Josip Ilicic was once again a large reason for the win but with him featuring in TOTW 15 I see the IF going elsewhere. Gosens is a strong candidate with the German picking up one goal and one assist from LWB.

Marko Livaja - CAM - OVR 76 A bit of a punt here with Livaja being from the Greek division but in the past we have seen a lot of love for AEK specifically and thus I feel that Livaja will stand out. The Croatian scored two of their three goals in a 3-1 home win.

Ricardo Horta - LW - OVR 79 This one could go several ways with Braga recording a huge 7-1 win over Belenenses but I believe that Horta is the best bet with him being gold alongside the fact he has two goals and one assist. There could easily be a second but with it being Portugal I didn't want to play it that way.

Diego Castro - CAM - OVR 76 I was very surprised not to see Castro pick up an IF the other week but once again I am taking the punt on the Spaniard. This time its for even less with just a goal and an assist to his name but with a lack of other options I can't exclude him from the side.

Andrea Belotti - ST - OVR 82 Another striker from the Calcio A now with Belotti, who scored his 8th and 9th goals of the season, allowing Torino to come away with an impressive 2-0 away win over Roma. A performance which saw Gazzetta award him with an 8/10.

Nicky Maynard - ST - OVR 66 An 81 rated Mansfield striker seems a bit absurd but with the current rating system in place it looks as though its just around the corner after Maynard scored three in a 3-2 away win over Cambridge.

Luca Zidane - GK - OVR 63 It would be quite remarkable for a non gold goalkeeper to get in twice under the current system but there is a serious chance of Zidane doing just that after he saved a penalty to keep a clean sheet in Santander's 0-0 draw.

Tyrese Campbell - RW - OVR 65 Stoke have been very hit and miss this year after what was a very poor start from them. Results have left them in the bottom half of the table but with results starting to pick up they are slowly climbing. Their most recent match resulted in an impressive 5-2 away win over Huddersfield with Campbell scoring twice and assisting another.

Juan Munoz - ST - OVR 72 There were only a couple of hat tricks that occurred this week which leaves the door open on the silver front. One of those should be going to way of Munoz who although didn't scored three did manage three assists to go alongside his goal.

Matt Godden - ST - OVR 66 Godden was snubbed for TOTW last week for no real reason but once again he is in with a shout after bagging himself another hat trick. Coventry came away with a 4-1 away win. Surely the second hat trick of the week will be enough for him?

Nahki Wells - ST - OVR 70 QPR put in a dominant display on New Year's Day, hammering Cardiff 6-1, a result which they will hope starts a string of good results. Nahki Wells was the catalyst behind a lot of the success with the forward scoring three and assisting another.