FIFA 20 Team of the Week 16 Predictions

Published on by Aarong222 70 Comments 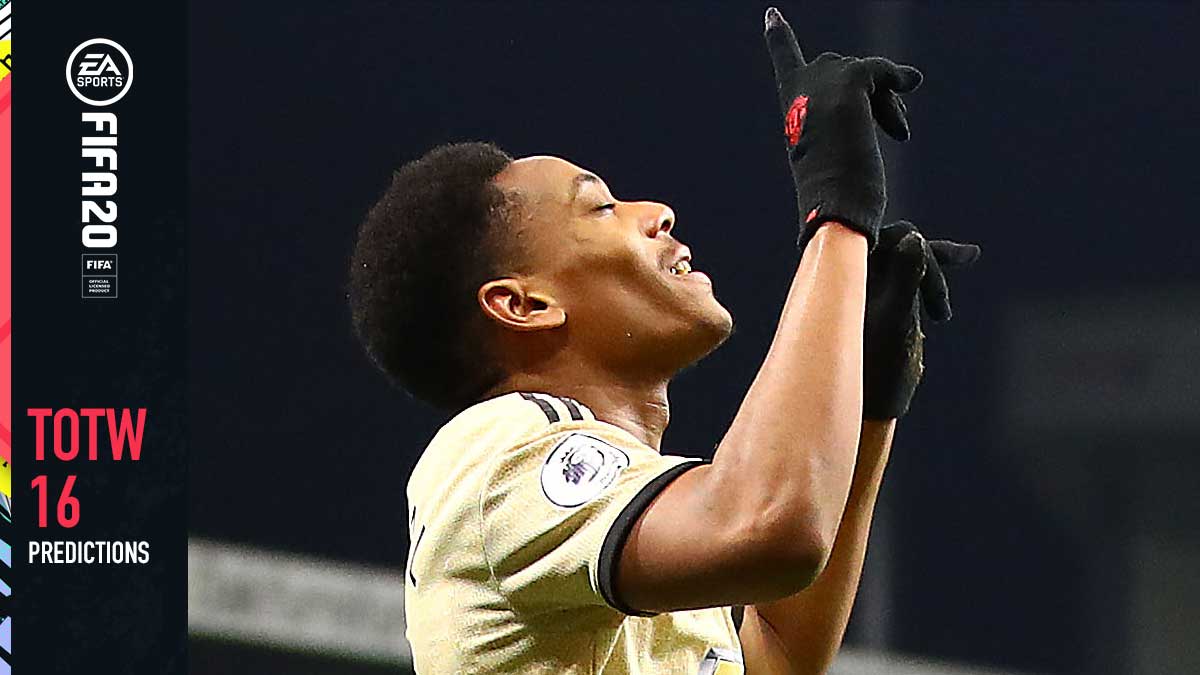 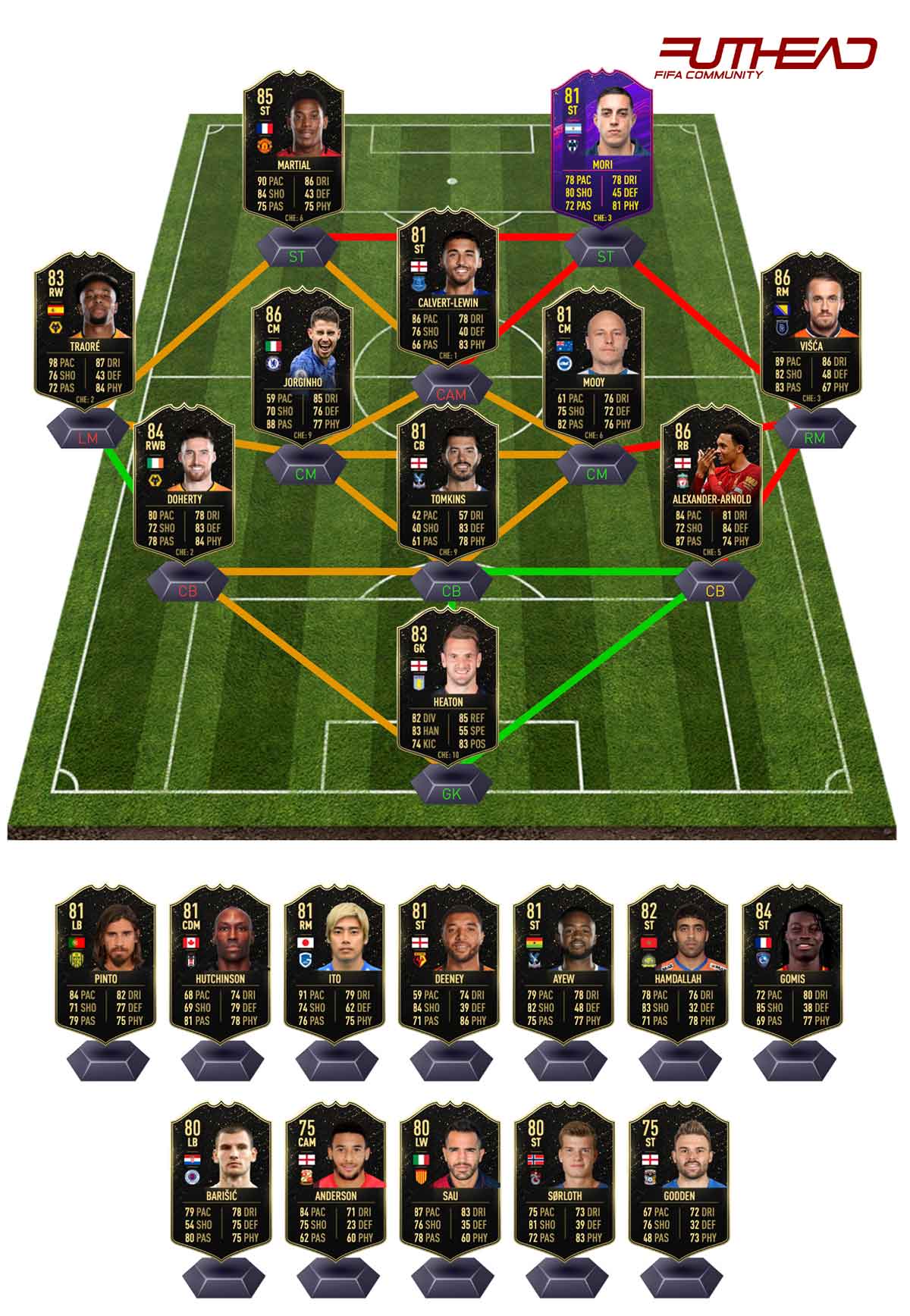 Tom Heaton - GK - OVR 80 Inevitably we are going to see at least one Premier League goalkeeper, if not more, in this week's side. There are a few options for who that could be with Heaton, Guaita and Foster all making a strong case. For me, I have gone the way of Heaton, with Villa picking up a vital three points over Norwich. Heaton's six saves to keep a clean sheet could be highly influential come the end of the season.

Trent Alexander-Arnold - RB - OVR 83 It's very early to make such a call, but with TAA only being 21, I strongly believe that he could potentially be recognized as the greatest RB of all time in years to come. He goes from strength to strength and is revolutionising the RB role. So much so that he controlled the vast majority of the game against Leicester in what was a 1st v 2nd place battle. He grabbed three assists before adding a goal to top in off but even with those statistics it doesnt do the performance justice. One of the best we have ever seen.

James Tomkins - CB - OVR 78 Tomkins is the first of two Place players that I have opted to select with the main reason being that they come from different matches. Tomkins comes from the 1-1 draw with Southampton, while my second selection was from the 2-1 win over West Ham. The English defender is included for opening the scoring with a brilliant header, and if it wasn't for a silly error at the back for Palace, it would have ended up winning the match.

Matt Doherty - RWB - OVR 78 A lot of predictors (myself included) have opted to go for Traore for his goal and assist. However I feel that Doherty is being overlooked. The Irish defender completed the comeback, scoring the final Wolves goal, allowing them to come from two behind to win 3-2. He was then awarded MOTM, which with the lack of Gold defenders, should stand for something here.

Adama Traore - RW - OVR 74 Since Traore has been deployed in the more attacking RW role instead of the RWB role we saw earlier in the season, he has managed to reach another level of performance. Once again, he showed up in a big game and once again that opponent was Manchester City. The Spaniard scored once and assisted another in the previously mentioned comeback. With minimal matches being played this week, we could easily see two players selected from one match.

Jorginho - CM - OVR 83 First things first Jorginho was extremely fortunate not to be sent off in this match, which actually become the turning point in it. The Italian went on to level to score shortly after before Abraham went on to complete the turnaround and leave Arsenal shocked. Lampard's young Chelsea side continue to excel, but it was the experience of Jorginho which decided this match. With it being such a high caliber game, I can see an inclusion from it.

Aaron Mooy - CAM - OVR 76 Brighton were unfortunate against Tottenham in their first game, and it was Mooy who was behind a lot of their success before eventually falling to a 2-1 defeat. Brighton, however, did manage to pick up three points while hosting Bournemouth on Saturday, and once again it was Mooy who was behind the majority of attacking threats. The Australian added his first goal for Brighton alongside claiming MOTM. One goal is potentially pushing it, but its very likely that a couple of single goal players will be included this week.

Edin Visca - RM - OVR 84 There is potential to see a Demba Ba IF, but with him being a Silver item, I feel as though EA will opt for the higher rated one of Visca. With the Bosnian being 84 rated, it would likely result in him being one of the higher rated items in the side. And with two assists to his name, I can see that being enough for his first IF.

Anthony Martial - ST - OVR 83 The talent has always been there for Martial, it's just a matter of keeping fit and being trusted under the management -- both of which he has struggled with while at United. OGS has seemingly always been a fan of the Frenchman though, and for the most part has played him as a lone striker this season. He scored twice in United boxing day win over Newcastle before then scoring the opener against Burnley as well.

Dominic Calvert-Lewin - ST - OVR 77 DLC was snubbed a couple of weeks ago in a week which EA really should have included him. There's a minuscule chance that he suffers the same fate on Wednesday. The Everton striker has picked up some serious form since the departure of Marco Silva scoring five in his last five matches. He scored the only goal in their 1-0 win over Burnley before scoring both in a 2-1 win over Newcastle on Saturday.

Rogelio Funes Mori - ST - OVR 77 It was the final of the Mexican league this weekend, with both legs being played in consideration of this side. Monterrey were the side to lift the title and thus a Hero item is likely on the way. There are a few options, but I feel that Mori contributed the most, scoring in both matches (including a wondergoal nearly at the death to clinch the first leg) to help them go on to become champions.

Tiago Pinto - LB - OVR 75 This is a strange one as Pinto was far from the best option from this match. But with him being a Gold item, it should give him the edge over multiple silvers. The LB provided the assist on both the home sides goals. And although they only managed a 2-2 draw, with the lack of options this week, I just can't ignore such a performance, on paper anyways.

Atiba Hutchinson - CDM - OVR 76 Besiktas went into the break one down to Genclerbirligi, which was a shock, but with the away side going down to nine men as early as the 36th minute, it was always likely to see a comeback occur. Hutchinson was the talisman for that, being involved in all four Besiktas goals with one for himself going alongside three assists. The performance should nail him on for this side.

Junya Ito - RM - OVR 75 It was a chance for the Belgian league to pick up a few IFs this week, but it looks as though there will only be one, two at a push. Ito is the clear cut candidate after scoring once and assisiting another for Genk and picking up an 8/10 for doing so, making him the only Gold item to achieve that grade.

Troy Deeney - ST - OVR 78 This selection comes due to covering different angles instead of taking a complete punt with another selection. Deeney was not the official MOTM. However with two goals in a 3-0 win for 10 men Watford, he looks to be a strong shout. One of his goals was from the penalty spot. However with Watford struggling for points, I feel that he could sneak in as a result.

Jordan Ayew - ST - OVR 75 Surprisingly there looks to be enough strikers that we dont have to force in options with a single goal. Ayew could well be the closest to that. But with one goal, one assist and a MOTM award in a 2-1 home win for Palace, I think that Ayew could sneak into this side.

Abderrazak Hamdallah - ST - OVR 79 When you consider Hamdallah's record breaking season in the 2018/19 campaign, it's safe to say that he has been rather underwhelming for the new season. That being said, he did manage to bag himself a hat trick during Al-Nassr's most recent three points scoring two late on to secure a 4-1 win.

Bafetimbi Gomis - ST - OVR 81 Gomis was a late addition to the side replacing Cisse, who could well still make the cut. But Gomis's performance forced him out after the Frenchman managed to sore three goals in Al-Hilal's 7-0 demolition of Al Adalh on Monday evening.

Borna Barisic - LB - OVR 71 Celtic against Rangers is one game which almost always results in an IF. When you consider the fixture fell during a week which has limited fixtures, I would say that a Rangers IF is now guaranteed in TOTW 16. There are a few options from the match, but for me, it has to go the way of Barisic. The Croatian provided both assists in the 2-1 win for Rangers and claimed MOTM for doing so.

Keshi Anderson - CM - OVR 65 Despite the lack of fixtures available for this selection process, there were still a surprising amount of hat tricks that were scored. One of which was Swindon's central midfielder, Keshi Anderson. Swindon recorded a convincing 4-0 win at home to Cambridge with the 2nd, 3rd and 4th all coming from the boot of Anderson.

Marco Sau - LW - OVR 72 The addition from the Serie B is also an easy selection with Marco Sau being the clear differential in Benevento's 4-0 home win over Ascoli. The Italian scored three of those four goals from the wing allowing the home side to maintain their lead at the top of the table.

Alexander Sorloth - ST - OVR 73 For this one ,I am taking the risk of going for the Silver player of the Gold option. But realistically, it has to be Sorloth in this situation. Sorloth was involved in four of Trabzonspor's goals, scoring two, assisting another and winning the penalty as well. The only risk is that Sosa with two assists and sturridge with two goals are also both strong contenders for this side.

Matt Godden - ST - OVR 66 We end the prediction with another hat trick, this time coming from League 1 with Coventry recording a 4-1 away win over top of the table Wycombe. Godden scored three of those for goals to make the top end of League 1 even closer than it already was with just seven points separating the top seven sides.