FIFA 20 Team of the Week 15 Predictions

Published on by Aarong222 33 Comments 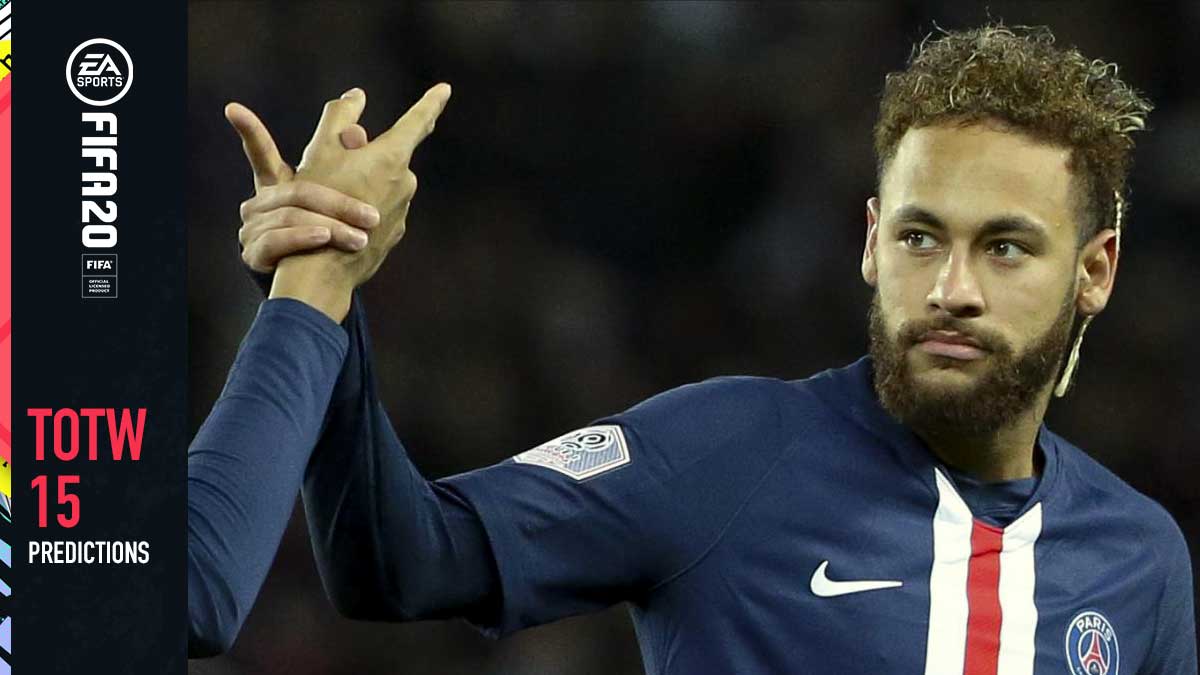 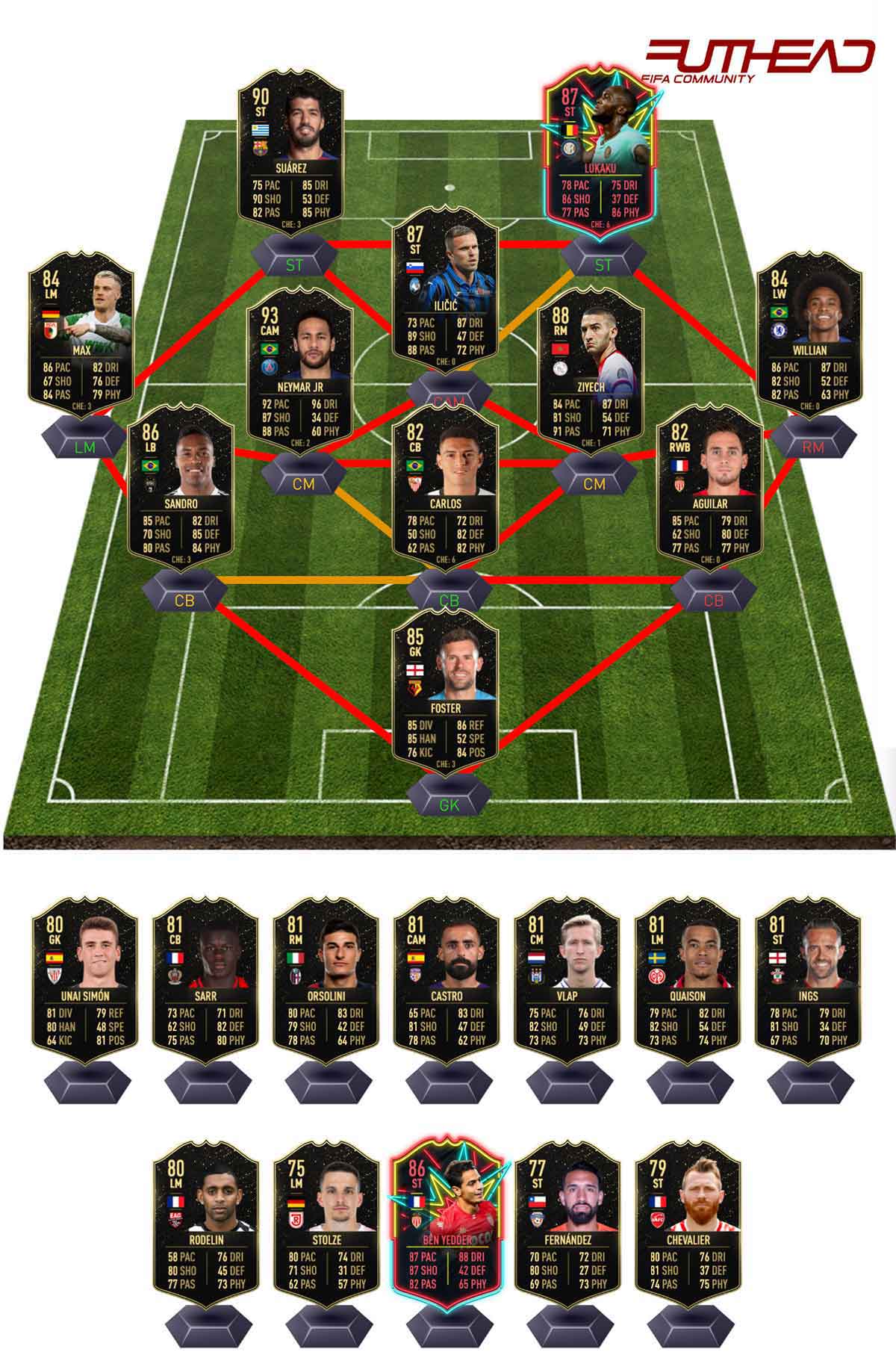 Ben Foster - GK - OVR 80 Once again I found the goalkeepers very difficult to predict but Ben Foster could easily pick up a SIF for his display in Watford's shock 2-0 win over Manchester United. The English stopper made a total of eight saves to keeper his clean sheet but most of it can go down to poor finishing in truth.

Alex Sandro - LB - OVR 85 We have seen EA ignore ratings on numerous occasions this year and thus Alex Sandro's 6.5 although bothers me is not ruling him out entirely. The Brazilian provided the assist on both Juventus goals however was also at fault for the one they conceded. Two assists on paper looks good though and I can see EA pouncing on it.

Diego Carlos - CB - OVR 79 This is a slight risk when you consider that Diego Carlos recently picked up a RTTF item but with this being a worse item I don't see it changing his value and thus allowing him to be included in TOTW. The Brazilian gets the nod after scoring the first of Sevilla's two goals in a 2-0 away win over Mallorca.

Ruben Aguilar - RWB - OVR 79 This is a very risky call but I am opting to go with Aguilar over the popular shout of Ben Yedder. Both picked up an 8 from L'Equipe however Aguilar made TOTW while Ben Yedder didn't on top of that there are already several top end striker shouts which I prefer to Ben Yedder while Aguilar is one of the stronger defender shouts.

Philipp Max - LM - OVR 77 Since Max has made the transition from LB to LM for Augsburg he has developed into a completely different player and has been scoring for fun as of late. He added another two to his tally this week with Augsburg recording a 3-0 home win over Dusseldorf, claiming a perfect 1 match rating from Kicker.

Neymar - CAM - OVR 92 We saw Mbappe snubbed last week in favour for a worse option in Paredes and thus I expect that Mbappe could be on his way for a TOTY selection. Once again the Frenchman could be selected for TOTW but I am going the way of Neymar instead. The Brazilian scored once and assisted another to claim an 8/10 from L'Equipe from what looks to be a CAM position.

Hakim Ziyech - RM - OVR 85 The Dutch IF may well just not happen this week but Ziyech would add a high rating to the side. Ajax ran away with a 6-1 win at home to Den Haag this weekend but no player picked up more than one goal one assist which makes the selection difficult to make. Ziyech picked up the highest match rating though which should edge it towards the Moroccan.

Willian - LW - OVR 82 Chelsea recorded a 2-0 win over Tottenham to continue what I feel is an impressive season for them under the circumstances they have. Willian scored both those goals and although the position is debatable his inclusion in the side is not.

Luis Suarez - ST - OVR 89 When it comes to match ratings Suarez wasn't actually that good at all but I just can't see EA ignoring the Uruguayan after scoring once and assisting another three. He is a big name player and I feel that its enough for him to be included.

Romelu Lukaku - ST - OVR 85 Inter continue their reign at the top of Serie A with a 4-0 home win over Genoa. Lukaku continued to shine since his move to Italy, being involved in three of those goals with two for himself alongside providing the assist on another making the Belgian set for another OTW upgrade.

Josip Ilicic - ST - OVR 84 Atalanta inflicted a heavy 5-0 loss on AC Milan, a result which shows just how good this Atalanta side is. All their main players performed as is often the case but it is Ilicic who is inevitably going to pick up the IF after scoring twice and assisting another to claim an 8/10 on Gazzetta.

Unai Simon - GK - OVR 73 We saw a silver keeper make the bench last week and we could well see history repeat itself here. Unai Simon has bee outstanding this season and if he were a gold item we would have seen at least two if not three IFs previous to this shout. He could finally make the cut though after making eight saves in a 0-0 draw with Real Madrid.

Malang Sarr - CB - OVR 76 We have seen so many Ligue 1 defenders as of late and once again it looks as though we could have a couple on the way. Sarr scored one of Nice's goals in their 3-0 win over bottom placed Toulouse and L'Equipe awarded him a 7 for doing so.

Riccardo Orsolini - RM - OVR 76 The Serie A selections were rather straight forward to select this week with Gazzetta's match ratings making several players almost certain to make the side. Orsolini was another o those after he scored twice for Bologna in a 3-2 away win, claiming an 8/10 for doing so.

Diego Castro - CAM - OVR 76 Diego Castro is starting to get on now at 37 but he is still performing to a high standard in the A-League. His latest performance in Perth's 6-2 win was the best he has had in a while though. Two goals and one assist is what the Spaniard managed which should be enough for his first IF of the year.

Michel Vlap - CM - OVR 75 I missed the Belgian league IFs last week despite a couple of high match ratings I opted to still ignore them. I don't want to make the same mistake this time around and thus Vlap is included in my side for his brace in a 2-0 win for Anderlecht.

Robin Quaison - LM - OVR 75 It's been a while since we have seen a potential IF come from a Tuesday match but with it being the Bundesliga I am confident that we will see it included, especially when Quaison managed to pick up player of the week for the midweek set of fixtures. The Swede claimed the award after scoring three goals in Mainz's 5-0 away win over Werder Bremen.

Danny Ings - ST - OVR 76 Southampton have not been that great this season but have picked up in recent weeks. A large reason for that turnaround has been Danny Ings. The forward added another two to his tally this week in a 3-1 win away to Aston Villa taking his number of goals to 11 for the season.

Ronny Rodelin - LM - OVR 73 Hat tricks were not overly present this week and thus I expect those who managed them to walk into this side. Rodelin was one of them,scoring three from LM in Guingamp's 5-1 away win.

Sebastian Stolze - LM - OVR 66 With the Bundesliga offering very little in terms of IF options I can see the second or third division picking up an IF instead. Stolze seems to be the obvious solution after claiming player of the week for his two goals and one assist in a 3-2 win.

Wissam Ben Yedder - ST - OVR 83 I was very close on ignoring Ben Yedder but in the end I have decided to play things safe and include him despite my gut feeling of him being snubbed. That is only due to the fact I would be taking a punt on whoever I selected for this spot though. That being said with two goals and one assist Ben Yedder is a strong contender for this side.

Ronnie Fernandez - ST - OVR 70 Originally when going through the games I snubbed Fernandez due to two of his three goals coming from the penalty spot but after realising how few players scored multiple times this week I went back to him. It's difficult to ignore three goals even with the penalty influence this week.

Teddy Chevalier - ST - OVR 72 A second option from Ligue 2 now which usually I would say is pushing it but with a lack of clear cut options I can't see either missing out. Chevalier scored all three of Valenciennes goals in their 3-0 win over second placed Lorient.