FIFA 20 Team of the Week 13 Predictions

Published on by Aarong222 121 Comments 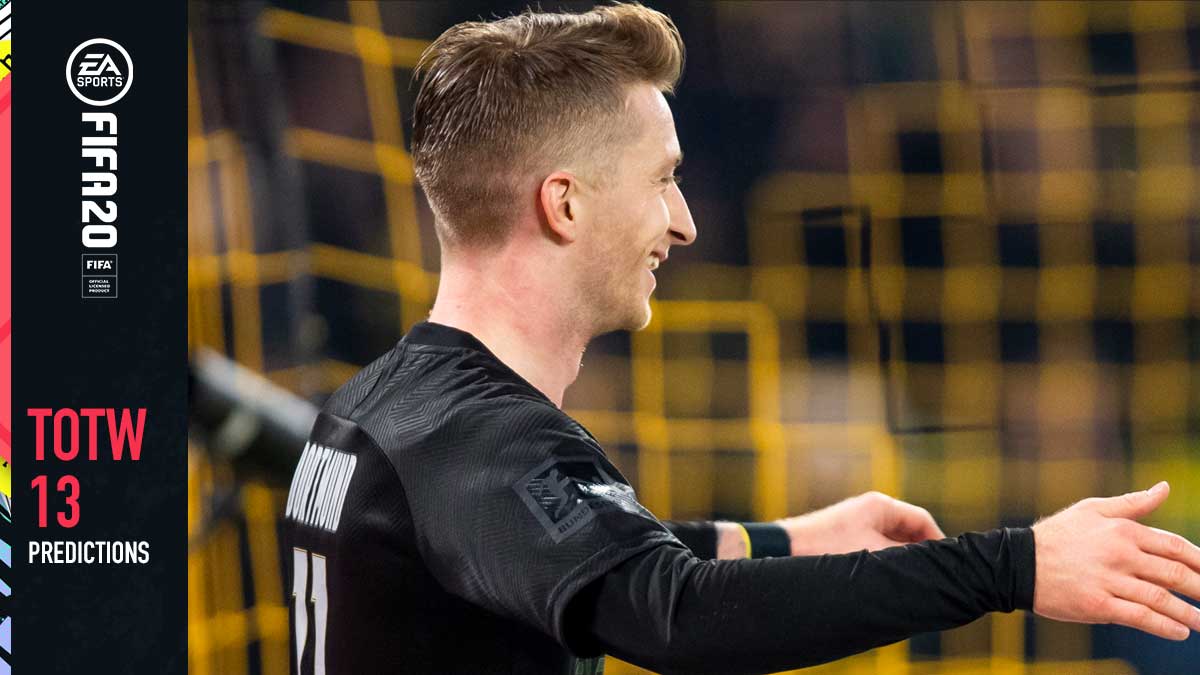 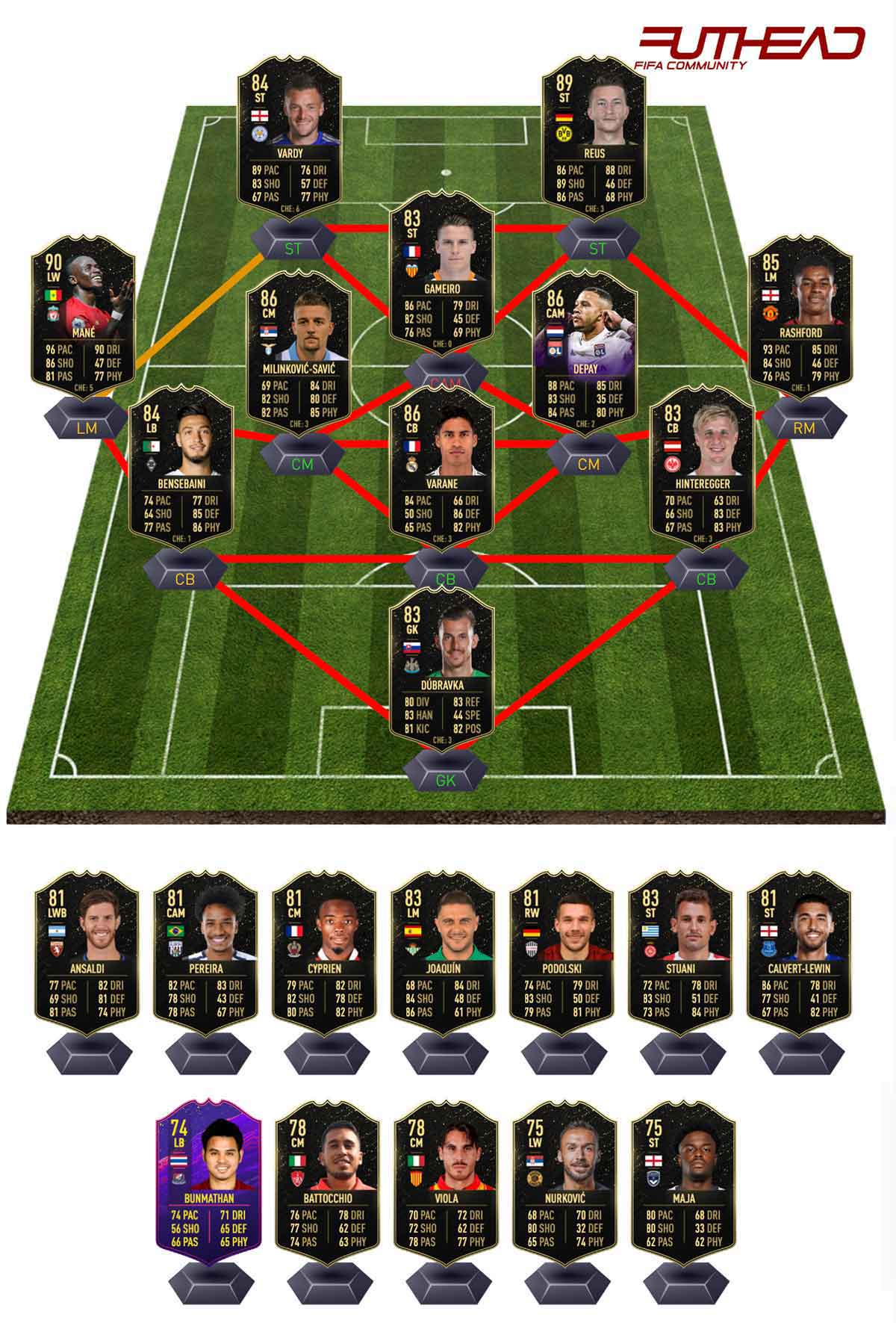 Martin Dubravka - GK - OVR 80 It's rare that Premier League keepers get selected for TOTW. But Dubravka's performance on Thursday night for Newcastle was near miraculous, with the Newcastle stopper making a total of six saves. With some of them being truly unbelievable, I find it hard to see him being snubbed from this side.

Martin Hinteregger - CB - OVR 80 It looked as though it was going to be a tough day at the office for Frankfurt when they fell two goals behind to Hertha. However an unlikely hero emerged for them from defence: Hinteregger grabbed one straight back before going on to assist another late on to savior a point.

Raphael Varane - CB - OVR 85 Potentially a big name on the way with Varane after the Madrid defender made La Liga's TOTW for scoring the first of Madrid's two goals in a 2-0 win over Espanyol.

Ramy Bensebani - LB - OVR 77 Another poor result for Bayern Munich saw them fall to defeat via a 2-1 Gladbach win, with the second coming late on. A result which saw Gladbach go top while Munich dropped down to a surprising 7th position. Although Bensebani picking up his first IF just three weeks ago with two goals to his name in a game like this you just cant ignore him,

Marcus Rashford - LM - OVR 83 Rashford is in some serious form right now and picked up MOTM in both Manchester Uniteds big wins this week, the first coming against Tottenham from which he scored twice in a 2-1 win and the second against City, scoring once in another 2-1 win. I feel like he could get the IF from both of these matches so surely with the combination of both he goes on to make the cut.

Sergej Milinkovic-Savic - CM - OVR 85 Juventus fell short for the first time this season to the hands of Lazio, who climb upto third as a result. I fully expect the MOTM from this match to be included in TOTW and that award goes the way of Milinkovic-Savic. The Serbian picked up one goal and one assist to claim a 7.5 from Gazzetta.

Memphis Depay - CAM - OVR 84 There are a lot of options from Ligue 1 this week and thus I expect a couple to miss out however Depay shouldn't be one of those after the Dutchman scored twice and assisted another from CAM during Lyon's 4-0 win over Nimes. L'Equipe awarded him with an 8/10 although they were very generous on some other players too.

Sadio Mane - LM - OVR 88 With Mane not featuring in the TOTGS side it gives him a strong chance for TOTW 13 with the Senegal winger scoring once and assisting another two in the Merseyside Derby. He was rested during their weekend fixture but with it being such a high profile game in the Premier League I can't see it being snubbed. The other option is Origi who scored twice in the same match.

Kevin Gameiro - ST - OVR 81 With Valencia falling two behind after just 20 minutes it looked as though Levante could run away with it but Valencia had other ideas, with the Spanish outlet scoring just before the break and then coming out in full force during the second half to win 4-2. Gameiro scored two of those goals and picked up MOTM as a result.

Jamie Vardy - ST - OVR 82 Vardy made it eight consecutive Premier League games with a goal as he looks set to challenge for his record again this year. The latest came match saw him score twice away at Aston Villa with Leicester recording a 4-1 win to maintain their chase of Liverpool at the top.

Marco Reus - ST - OVR 88 Dortmund recorded a convincing 5-0 win at home to Dussledorf from which we have two clear TOTW options the favourite has to be Reus considering that he was the official MOTM alongside having more appeal as an IF. Sancho can feel hard done by but I can't see both players making the side despite both picking up two goals and one assist.

Cristian Ansaldi - LWB - OVR 78 This ones debatable simply down to his position. With EA giving him a LM base item it could be argued that they view Torino's formation as midfielders rather than wingbacks but for me he looks like a LWB and thus with a goal and an assist in Torino's 2-1 win over Fiorentina he walks into my side.

Matheus Pereira - CAM - OVR 76 Matheus Pereira has been a stand out player for West Brom this season with several top end performances coming from the Brazilian. It was arguably his best yet on Sunday though during WBA's 5-1 home win with one goal and three assists to his name. There is a lot of competition this week but i feel that Pereira is one of the best.

Wylan Cyprien - CM - OVR 77 Another Ligue 1 option now, this time with a previous snubbed player in Cyprien. The French midfielder scored both the first and second Nice goals in their 4-1 win at home to Metz.

Joaquin - LM - OVR 80 With Messi being unable to pick up an IF for his hat trick in Barcelona's 5-2 win due to a current TOTGS item and additionally a POTM SBC there was only one clear cut option from La Liga and that goes to Joaquin. The Spanish winger scored all three of Betis's goals in their 3-2 win over Bilbao to make his spot a certainty.

Lucas Podolski - RW - OVR 75 Another hat trick now, this time over in Japan, where a fan favourite in Podolski managed to find the net on three occasions. Vissel Kobe went on to win the match 4-1 which will inevitably result in the German picking up an IF.

Cristhian Stuani - ST - OVR 79 It was only a matter of time before Stuani picked up an IF with the form hes on and finally it looks as though he will be getting it. The Uruguayan took his tally to 16 in 15 games with another three during Girona's 3-1 win over CD Lugo.

Dominic Calvert Lewin - ST - OVR 77 Everton finally got themselves a win, with Duncan Ferguson being the new interim boss and with it being a 3-1 win over Chelsea its a brilliant way to introduce himself. Calvert Lewin scored two of those goals with Richarlison scoring the other to make it three in three for him. It's DLC that looks set for a TOTW inclusion though.

Theerathon Bunmathan - LB - OVR 64 It is still difficult to tell what route EA are going down with these hero items with the previous selections being very hit and miss. Another title was officially won this weekend though with the J-League title going the way of Yokohama thanks to a 3-0 home win against 2nd placed Toyko. Bunmathan looks to be the best bet for an hero item after scoring one and assisting another.

Samir Nurkovic - LW - OVR 65 We start off the reserves section with a bit of an obscure selection in Nurkovic. The obscure being because he plays his football in South Africa, a division which doesnt get much of a look in when it comes to FIFA. That being said with a hat trick from LW surely it will be noted from EA and he will be included as a result.

Cristian Battocchio - CM - OVR 70 There were two midweek hat tricks in Ligue 1 from silver players and with both picking up 9/10 match ratings from L'Equipe I cant see either of them being ignored. The first was Battocchio who scored three from CM in Brest's 5-0 win at home to Strasbourg.

Nicolas Viola - CM - OVR 70 Serie B is known for its low scoring games but this one was anything but that with Benevento running away with a 5-0 win. Viola scored three of those goals which should result in him picking up an IF.

Josh Maja - ST - OVR 66 The second Ligue 1 silver hat trick came from an English striker in Josh Maja. Bordeaux have impressed this year and another strong performance saw them run away as 6-0 winners over Nimes. Maja scored half of those goals and assisted another.