FIFA 20 Team of the Week 12 Predictions

Published on by Aarong222 92 Comments 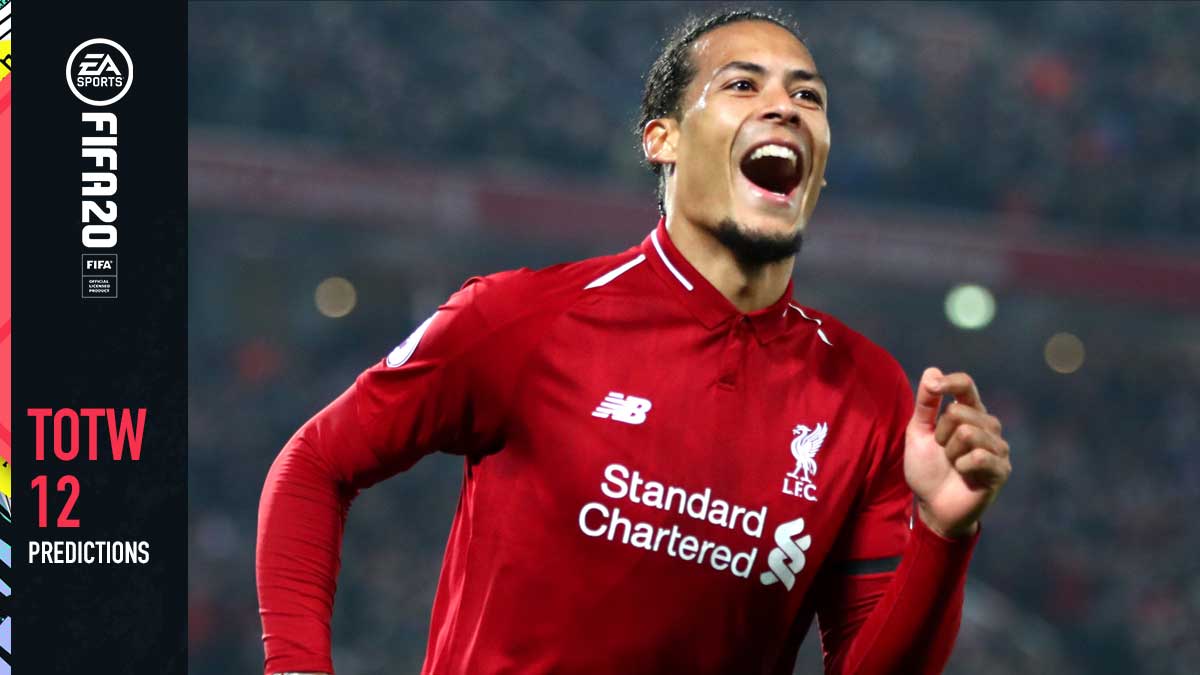 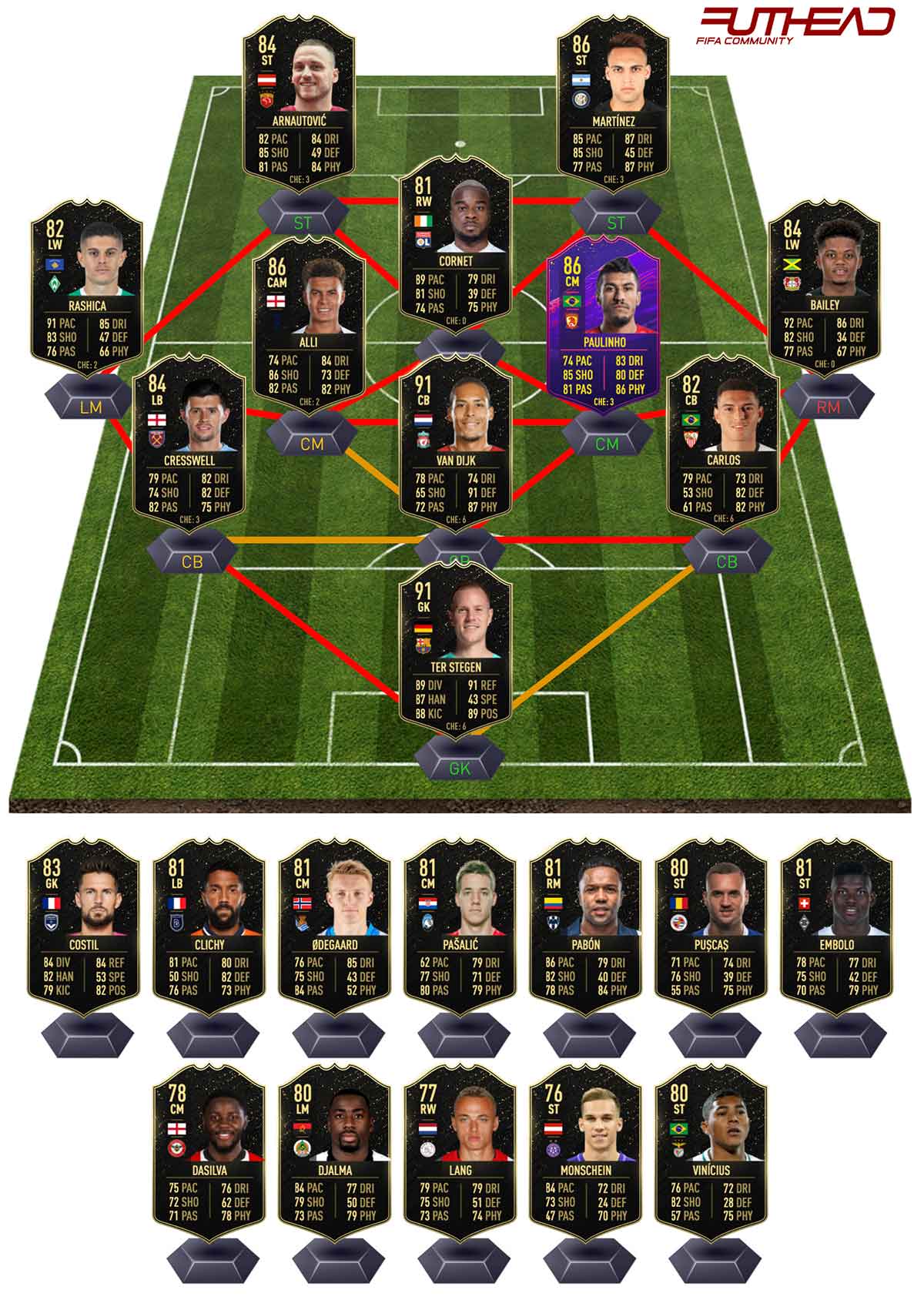 Marc Andre ter Stegen - GK - OVR 90 It was a huge game at the top of the table between Barcelona and Atletico Madrid with it being the away side that came out on top via a 1-0 win. Messi was the player to score a late winner, no surprises there but it was ter Stegen who stood out with a couple of vital stops, specifically the one from Morata's header standing out.

Aaron Cresswell - LB - OVR 76 Cresswell is showing the form that won him England caps in recent weeks with his goal threat going forward and from set plays alongside his ability to defend. The Ex Ipswich Town man scored the only goal of the game against Chelsea as West Ham got back to winning ways via a 1-0 win.

Virgil Van Dijk - CB - OVR 90 Although Trent was fantastic, providing both assists in this match there is only one man who is going to pick up the IF and that is of course Virgil Van Dijk. The Dutch international scored both of Liverpools goals, both from set pieces, helping Liverpool to a 2-1 win over Brighton despite a late scare with Allison seeing red.

Diego Carlos - CB - OVR 79 Sevilla looked the better side throughout their match with Leganes, which you would expect looking at the table. That being said the hosts struggled to put the game to bed and in the end it came down to a single goal. Sevilla were the side to get the goal with Diego Carlos scoring from the back. MARCA gave him three stars and thus he should make the side.

Milot Rashica - LW - OVR 79 Two left sided players from the Bundesliga could easily be pushing it but with the chance that Bailey misses out I couldn't then ignore Rashica. He picked up a 1.5 match rating from Kicker for his two goals in Wolfsburg's 3-2 win over Werder Bremen which should be enough for his spot after being snubbed a couple of times prior to this.

Dele Alli - CAM - OVR 84 I briefly mentioned the improvement of Alli under Mourinho last week with Son being the eventual player to get the nod. Here we are a week later and it will be Alli himself getting the IF after he scored twice from CAM during their 3-2 win at home to Bournemouth. If theres one thing to look forward to under Mourinho it has to be Alli getting back to his best.

Paulinho - CM - OVR 84 There were two games which counted towards this weeks side from the Chinese league and with Guangzhou winning the league on the final game of the season I fully expect there to be an IF for them. The risk I have taken is the fact this one comes from the first game with Paulinho scoring two. There was no clear option from the second match although Paulinho did get an assist. Hero Paulinho? Potentially.

Maxwell Cornet - RW - OVR 76 Ligue 1 was a difficult league to select from this week with all their candidates being outperformed by other options. That being said we are likely to see a couple from the division included and Cornet looks to be a good shout for that. The Lyon winger claimed both a goal and an assist in a 2-1 win away at Strasbourg.

Leon Bailey - LW - OVR 82 Had EA not have thrown the curveball of a moments Bailey SBC there would be no question surrounding his inclusion in this side but with that item being introduced it becomes difficult. Hradecky is the other clear choice but with two keepers I deem as certainties I am going the "risky" route of including Bailey.

Marko Arnautovic - ST - OVR 82 This week saw the Chinese league come to an end and Shanghai went out with a bang, winning 6-0 at home to Shenzhen. Arnautovic scored four of those six goals making him one of the favourites for TOTW 12. There could be two players from this match but most likely the case will be only Arnautovic.

Lautaro Martinez - ST - OVR 81 Another IF could be on the way for Martinez who is slowly becoming a very usable item in FUT. The Argentine impressed again for Inter who are recording some big results in Serie A this year. With a 7.5 and two goals to his name a SIF does look likely.

Benoit Costil - GK - OVR 80 I was going to go anther route originally with the keepers but after both ter Stegen and Costil picked up high match ratings I just couldn't look elsewhere. Costil was awarded an 8/10 from L'Equipe for his six saves in Bordeaux's 1-1 away draw with Reims. Which is a rating which rarely gets ignored for a gold item.

Gael Clichy - LB - OVR 77 Its been a few years since the name Gael Clichy has been in conversation but with the French fullback managing both a goal and an assist in Basaksehir's latest win, alongside keeping a clean sheet he should be in line for an IF on Wednesday.

Dorlan Pabon - RM - OVR 76 Once again we have the debate about play off matches counting or not but Pabon was one I just couldn't let slip by. The Colombian winger was crucial for Monterrey in their 5-2 win over Santon Laguna, scoring twice and assisting another.

Martin Odegaard - CM - OVR 78 Although Odegaard was once hyped to be the next big thing and now you don't hear as much of him, at just 20 years of age he is still a promising young player. The Norwegian was brilliant for Real Sociedad this weekend during a 4-1 home win with both a goal and an assist to his name. Outside of the goals he dominated the match as a whole though which is why he got so many plaudits from the match.

Mario Pasalic - CM - OVR 77 Atalanta are developing into one of the bigger sides in Italy over the past couple of seasons. They currently sit 5th in the table but I would fancy them to beat anyone on their day. Their latest win came away at Brescia. Scoring three without reply, Pasalic scored two of those and as a result picked up an 8/10 from Gazzetta.

George Puscas - ST - OVR 71 We have seen six silver players included on a regular basis this year and thus its not going to be something I am avoiding going forward. That being said with another English Championship player in the side Puscas is slightly risky. Strikers were few and far between though and thus I think he could sneak in.

Breel Embolo - ST - OVR 76 Player of the week in Germany went the way of Breel Embolo who was sensational for Gladbach in their 4-2 win at home to Frieburg, scoring twice and assisting another. He would have managed a hat trick if it was not for the woodwork but regardless of that Embolo will be in TOTW 12.

Josh Dasilva - CM - OVR 66 The reserves section contained the highest amount of competition for five spots that I have seen for a while this week. One who should easily make the cut however is Brentford's Josh Dasilva. The central midfielder scored three and assisted another as Brenford smashed Luton 7-0.

Noa Lang - RW - OVR 68 Ajax found themselves two goals down away at Twente before kicking themselves into gear. It was their youngster, Noa Lang who impressed the most though scoring three of Ajax's five goals to record a 5-2 win.

Djalma - LM - OVR 73 Over to the Turkish league now where we find another hat trick to talk about with Alanyaspor running away with a 5-0 win at home to MKE. Djalma who was playing LM scored three of those and assisted another making him an easy choice for TOTW.

Christoph Monschein - ST - OVR 68 Austria Vienna are not the side they once were in the Austrian division and their 5-0 win over Hartberg could bring some well needed momentum to them, sitting down in seventh position. Monschein cored three of those five goals and thus makes my side.

Carlos Vinicius - ST - OVR 72 There were three players who picked up an 8/10 in Benfica's 4-0 home win which could have made the selection process difficult. That being said with how EA do things the obvious choice is Vinicius. The Brazilian striker scored three goals and assisted the other, making him the clear option for the selection process.