FIFA 20 Team of the Week 11 Predictions

Published on by Aarong222 97 Comments 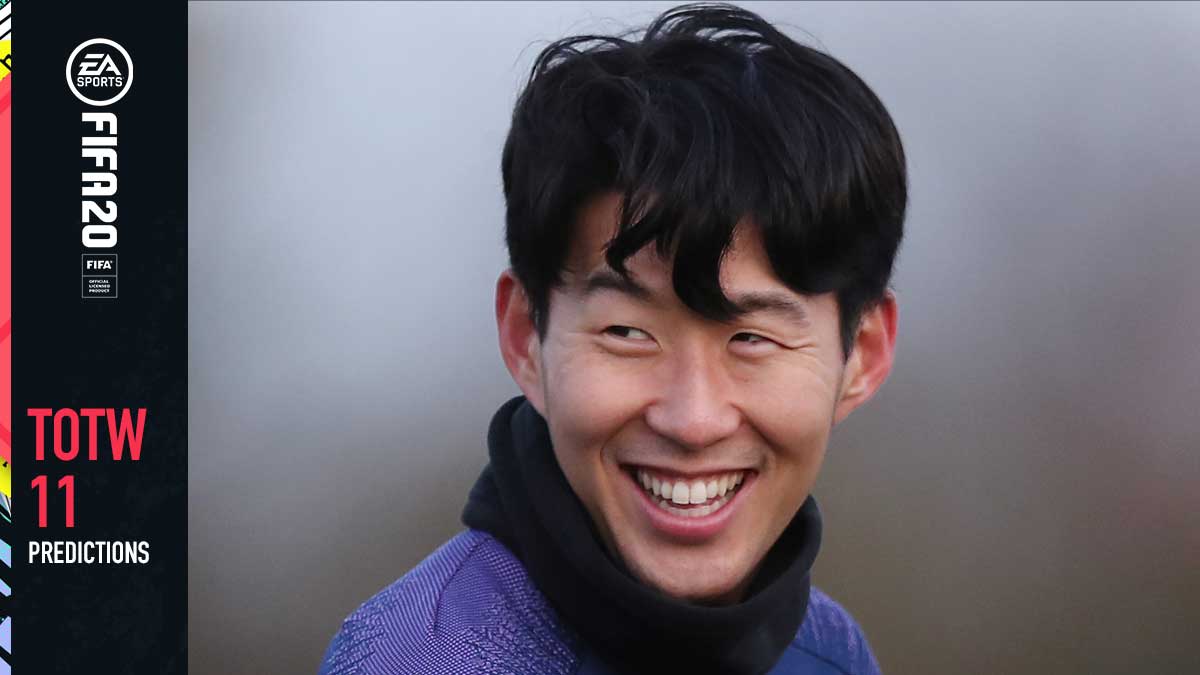 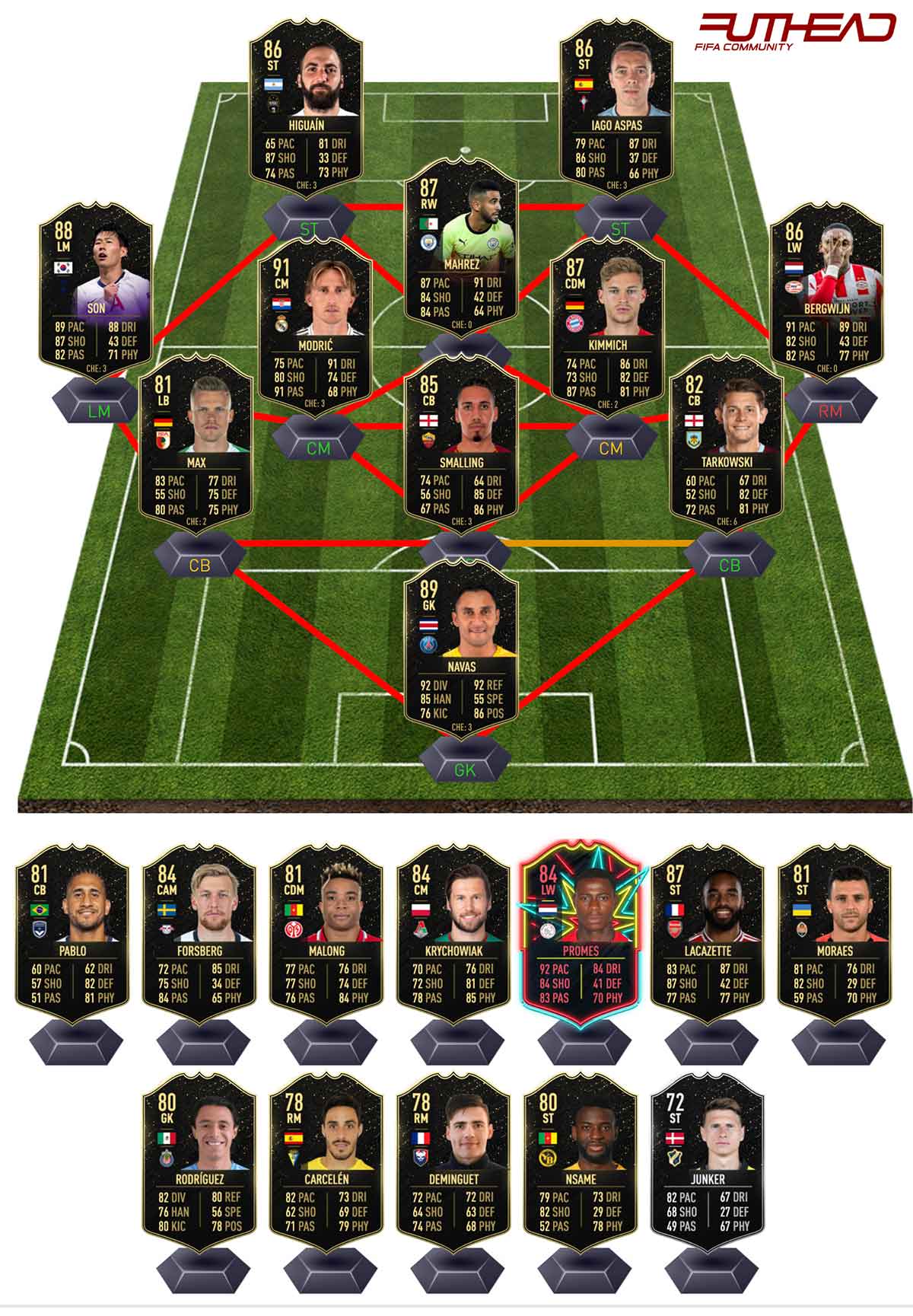 Keylor Navas - GK - OVR 87 Although I usually go with L'Equipes ratings without fail, I am overlooking them here; with a lack of gold goalkeeping options, I simply can't ignore Navas making eight saves to keep a clean sheet despite Di Maria claiming MOTM for his goal. That being said, a SIF for a singular goal is something EA could easily ignore. We will be seeing a PSG player feature, I just hope that it is Navas rather than ADM.

Philipp Max - LB - OVR 77 Bundesliga was a difficult league to predict this week with Kicker awarding some very random MOTMs where other options were seemingly obvious. Philipp Max was a clear example of this with the LB scoring once and assisting another yet losing the MOTM award to a CAM with one goal. Although I am going to use Kicker as a base Max is an option I just can't ignore.

James Tarkowski - CB - OVR 79 Burnley's defensive side of the game never fails to impress under Sean Dyce. Tarkowski not only was solid at the back against Watford this week but he also managed to grab both a goal and an assist which all but cements his spot come Wednesday.

Chris Smalling - CB - OVR 80 Although Smalling recently picked up his first IF, both Orsic and Nainggolan managed to pick up their second with a three week gap so I dont see why the trend wouldnt continue here. Smalling has shown some of his best football again in Italy and excelled for Roma again this week, managing to score once and assist another in their 3-0 win over Brescia.

Heung Min Son - LM - OVR 87 Mourinho is back and with that several of Tottenhams players performed to the standard we were used to seeing with both Alli and Son excelling. Son is the player I am backing for TOTW though with both a goal and an assist from LM. West Ham did give Spurs a late scare with two goals but the three points never looked like going anywhere else.

Joshua Kimmich - CDM - OVR 86 It's harder for Kimmich to get IFs this season with Bayern deploying him in a CDM role. But the German has played brilliantly several times this season already and looks to be a natural in the position. He scored once and dominated the middle of the park in their recent 4-0 win which Kicker awarded him a 1.5 for.

Luka Modric - CM - OVR 90 One of the big guns now with Modric managing to score once and assist another two for Madrid against Sociedad he is nailed on for this side and with the Croatian significantly not likely to feature in TOTY this IF could be a valuable one indeed.

Riyad Mahrez - RW - OVR 84 I felt as though I was forced into including a player from the Man City v Chelsea match and once again it was Mahrez who excelled during a big game. The Algerian's first IF came under similar circumstances and now his second could well be on the way. He scored the second City goal which turned out to be the winner during a 2-1 win at home to Chelsea.

Steven Bergwijn - LW - OVR 82 I'm sure once again we are all waiting for in anticipation for Promes to pick up an IF but once again he could easily be snubbed. Bergwijn looks to be the favourite from the Eredivisie after scoring twice from LW and claiming POTW with an 8/10 for doing so.

Gonzalo Higuain - ST - OVR 85 This was a big game for Juventus with Atalanta causing serious problems the last couple of season but it was a test that the old lady managed to step up to. Higuain specifically impressed after the Argentine was involved in all three of their goals with two for himself and the assist for Dybala to seal the victory late on.

Iago Aspas - ST - OVR 85 Vigo recorded an impressive 3-1 away win over Villarreal on Sunday with Aspas managing to score the second and third of those goals late on in the 80th and 93rd minutes of the match. I don't have Marca's ratings on this one but I would expect that he will be MOTM and thus make TOTW as a result.

Pablo - CB - OVR 77 You never really know what you are going to get with Monaco but Bordeaux are impressing this season and thus they took that to their advantage, coming away with a 2-1 win. Pablo scored the first of those two goals and claimed a spot in L'equipes TOTW by doing so.

Quincy Promes - LW - OVR 82 Although the Dutch league rarely gets more than one IF I can see an exception being made for Promes. The Dutch winger has been snubbed on numerous occasions already this season and with more and more FIFA fans calling for him to be included theres only so many more braces EA can ignore.

Emil Forsberg - CAM - OVR 82 Nkunku was actually awarded POTW in Germany and was additionally MOTM in this game but with just one assist from ST I simply can't justify him and instead have opted for Forsberg, who scored twice in the same match.

Gregorz Krychowiak - CM - OVR 78 There was a time when we would see an RPL player feature almost every week but with the issues EA have had with the league the past few seasons that has significantly dropped. That being said Russia is still a big market and thus whenever possible we have seen them included. Krychowiak looks nailed on for a TOTW spot after scoring twice in Lokomotiv's 3-2 away win over Tambov.

Kunde Malong - ST - OVR 75 Another prediction which goes against Kicker now with Zentner actually being awarded MOTM but with him being a silver item rather than a gold I am taking the punt on that allowing Kunde to get the nod. The Cameroon midfielder scored twice in their 5-1 win from CDM.

Alexandre Lacazette - ST - OVR 86 There was a lack of strikers available for selection this week and thus I am happy to take a punt on Lacazette. Arsenal will be more than disappointed at their 2-2 draw at home to Southampton but if it was not for the Frenchman it would have been even worse. The striker scored both goals for Arsenal with the last coming in the 96th minute.

Junior Moraes - ST - OVR 78 Moraes is a player who regularly scored twice but due to the league he plays in narrowly misses out every time. The Ukrainian finally went one better this week and scored a third though which means he is all but guaranteed a TOTW spot considering that he is a gold item. Shakthar went on to win 4-1 to maintain their lead at the top.

Jose Antonio Rodriguez - GK - OVR 74 A bit of a strange one here as we are yet to see a goalscoring keeper this season but in the past they have been included and with a couple of spots open for punts I am happy to take one here. With the score at 2-1 the opposing teams keeper came up for the corner and the complete opposite happened with Rodriguez claiming the ball before booting it from his hands into the opposing net to make it 3-1. A big kicking upgrade on the way?

Iza Carcelen - RB - OVR 70 Cadiz are flying high at the top of the table in Spain with a huge 10 point gap after just 17 games played and will take some catching now. Carcelen was the hero of the most recent victory scoring both their goals from RB in a 2-1 win over Lugo.

Jessy Deminguet - RM - OVR 69 Caen have seriously dropped down the rankings in France and now sit in 16th position of Ligue 2. They managed a 3-3 draw at home to Le Mans, a match from which they led 3-0. Although the final result was a disappointing one the face that Deminguet scored three from LM should be enough for a spot in TOTW.

Jean Pierre Nsame - ST - OVR 74 We saw the same situation in an Australian game last week and both players were ignored this time around Nsame scored all three from open play which should give him the nod from EA. Kasami however was on the losing side and thus we will have to wait and see if EA opt to include him or not.

Kasper Junker - ST - OVR 63 There wasn't as many hat tricks as usual which should make for an interesting reserves section but Junker was one of the few who did manage three goals, coming in Stabaek's 4-2 home win.