FIFA 20 Team of the Week 10 Predictions

Published on by Aarong222 95 Comments 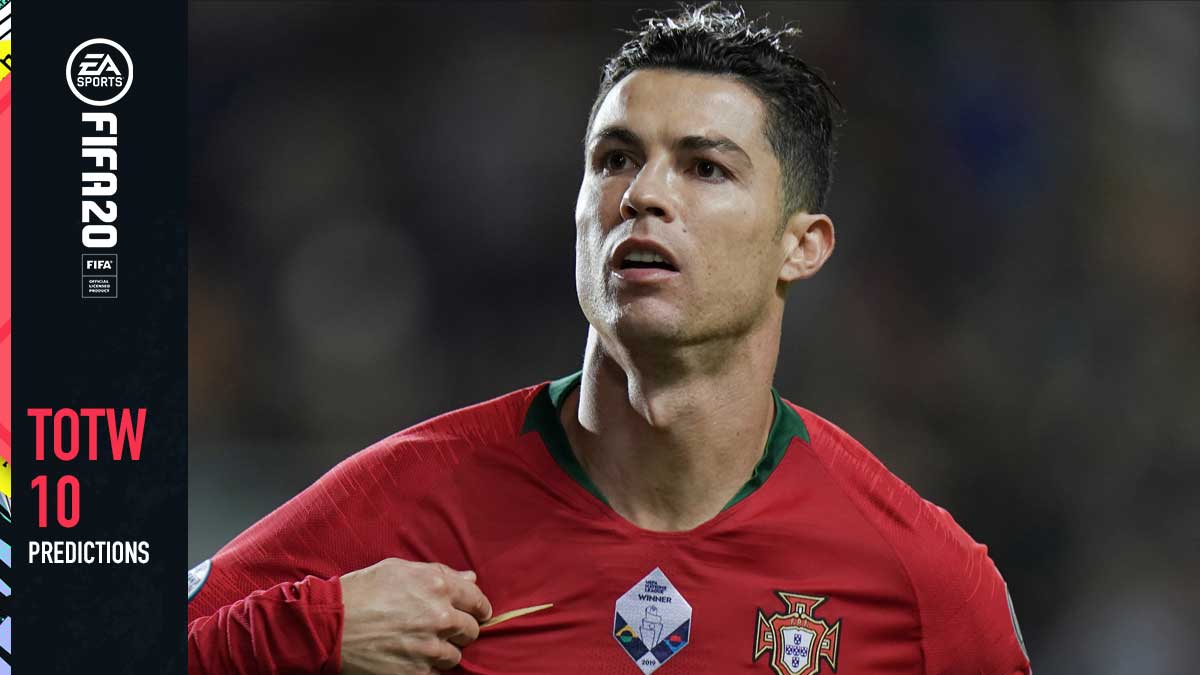 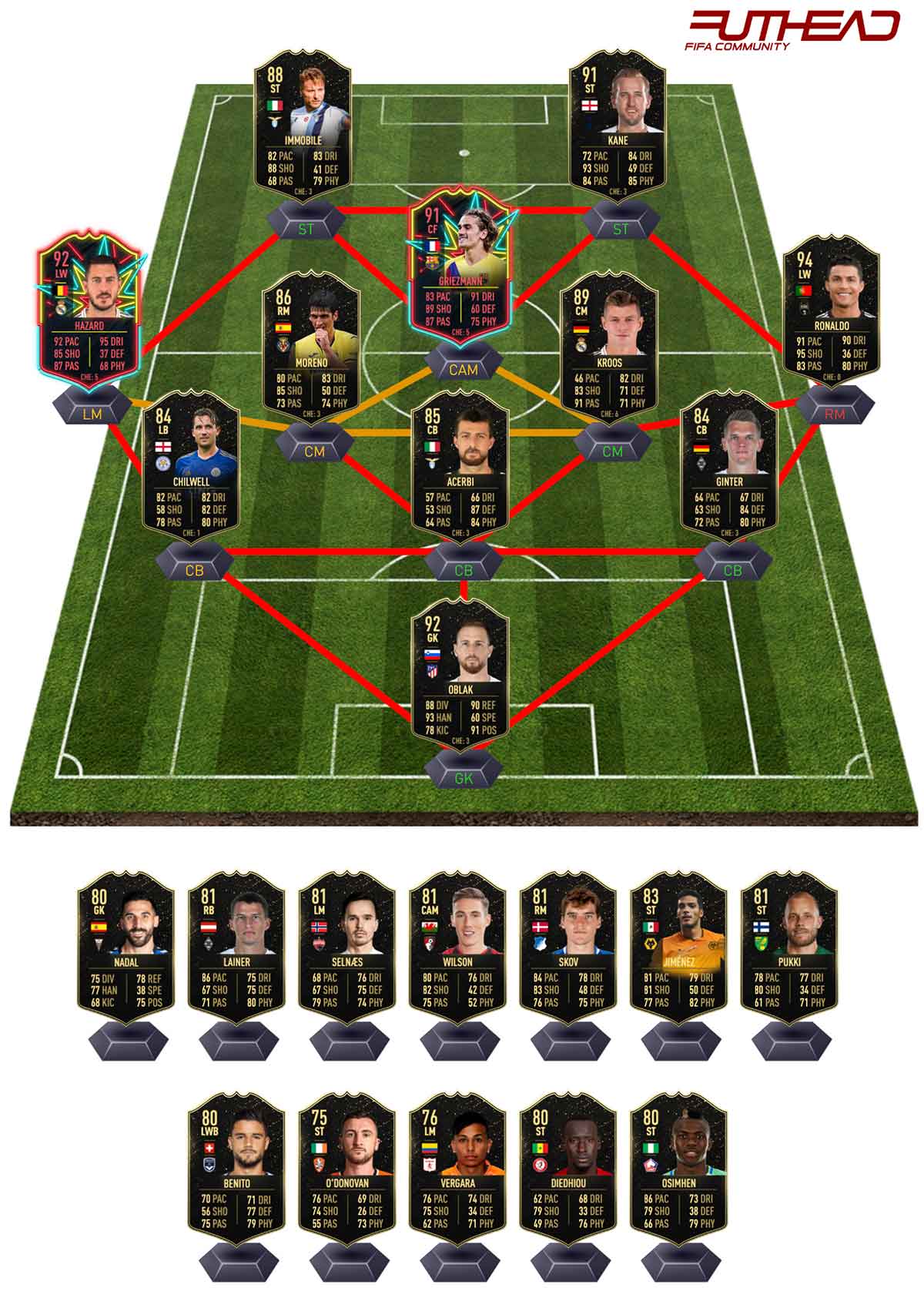 Jan Oblak - GK - OVR 91 There was no clear cut gold option for the goalkeeper spot and thus we have to take a punt based solely on a clean sheet and a few saves. Oblak managed four during Slovenia's 1-0 win over Latvia and with him being a big name I can see that working in his favour.

Ben Chilwell - LB - OVR 79 We have seen two players selected from the same game once before this year and ironically that player was also Chilwell. I expect the same to happen again after the LB was heavily involved offensively for England in their 7-0 win over Montenegro, picking up the assist on the first three goals.

Francesco Acerbi - CB - OVR 83 Italy have been one of the most impressive sides during qualification this year and the recorded another impressive result on Friday, winning 3-0 away to a respectable Bosnia side. Acerbi scored the first of those three goals and was solid defensively to help keep the clean sheet.

Matthias Ginter - CB - OVR 81 Germany is another club with two players selected this week and once again its down to a defender performing alongside an obvious choice. Ginter picked up both a goal and an assist from defence while also keeping his clean sheet. Kroos was the official MOTM but with a 1.5 Ginter also stands a chance.

Cristiano Ronaldo - LM - OVR 93 We saw Messi gain his first IF of the season last week and we are now set for Ronaldo to follow suit in TOTW 10. The Portuguese star scored three of their six goals in a 6-0 home win over Lithuania and thus looks nailed on for TOTW. Bernardo Silva also impressed but with just one goal and one assist I can see it only being Ronaldo selected from this one.

Toni Kroos - CM - OVR 88 Germany came away with a 4-0 win at home to Belarus but the scoreline really did flatter Germany with the game being much closer than suggested. Kroos is the obvious IF choice with two goals to his name but both Ginter and Neuer are also in with a shout.

Eden Hazard - LW - OVR 91 The last time I mentioned Hazard in a prediction it was a punt but this time around I am certain that we will be seeing an IF Hazard on Wednesday. The Belgian scored twice and assisted another as they went on to win 4-1 away at Russia.

Gerard Moreno - RW - OVR 81 There were so many matches from which I could have included two players from with Spain's 7-0 win over Malta offering several. Moreno is seemingly the front-runner though after scoring once and assisting another three.

Antoine Griezmann - CAM - OVR 89 This TOTW just keeps getting better and better, Griezmann looks to be another addition to the stacked side after scoring once and assisting another in France's 2-0 away win over Albania. With L'Equipe awarding him an 8/10 it looks as though the SIF is on the way.

Harry Kane - ST - OVR 89 Harry Kane continued his impressive goalscoring record for England with an additional three goals during their 7-0 demolition of Montenegro, all of which Kanes goals came during the first half. Although he already has an IF there is a five week gap and we saw two players pick up an SIF with just a three week gap so I would be surprised not to see Kane make the cut.

Ciro Immobile - ST - OVR 86 I really wanted to ignore Italy's Monday night fixture but with them putting nine past Armenia it just wasn't an option. I have decided to take the risk on these RTTF items and include them in the upcoming TOTW. Immobile is the first of two making my side after scoring twice and assisting another of the nine goals.

Tomeu Nadal - GK - OVR 73 The keeper situation was a difficult one with the only standout player being Nadal with the main problem being that he is a silver item and not a gold. We have seen 6 silvers selected a couple of time already this year. So with Nadal putting in a performance which saw him make eight saves, including a penalty save to keep his clean sheet I can't see him being overlooked.

Stefan Lainer - RB - OVR 77 Once again we saw a lot of strong shouts on the defensively side of the game from the international break. Lainer was another after being involved in both Austrian goals with both a goal and an assist in Austria's 2-1 win over Macedonia.

Ole Kristian Selnaes - LM - OVR 77 I have opted to go with Selnaes over Sorloth, who scored twice simply due to the fact that one is silver while the other is gold. Selnaes was also influential in Norway's 4-0 win, providing the assist on two of the goals.

Harry Wilson - CAM - OVR 75 Wilson has been one of the stand out talents in the Premier League so far for Bournemouth and he has now taken that over to the international level for Wales, scoring once and assisting another in their 2-0 away win over Azerbaijan.

Robert Skov - RM- OVR 75 Many will be hoping to see Eriksen over Skov and although there is a chance of that happening with the amount of high rated players already in the side I just can't justify him over Skov who managed two goals and an assist from RM.

Raul Jimenez - ST - OVR 80 Another player featuring during the RTTF promo was Jimenez but once again I am willing to take the risk on him getting an IF after he scored twice and assisted another for Mexico during the international break.

Teemu Pukki - ST - OVR 77 The first of two players selected this week with a POTM item to their name already is Norwich's Teemu Pukki. The Finish international was once again heavily involved in their win, scoring twice to help lead them to a 3-0 home win.

Loris Benito - LWB - OVR 73 I avoided the Monday fixtures for the most part but with Benito being involved in three Swiss goals from LWB I just couldn't ignore him, despite being a silver item. Benito managed a goal and two assists during their 6-1 win over Gibraltar with the defender claiming MOTM.

Roy O'Donovan - ST - OVR 66 This one's difficult with two of Donovan's goals being from the penalty spot during a 4-3 win and is made that much harder with Maclaren scoring all three of the opposing goals from open play. In the end I had to opt for the winning side though and although I have a bad feeling about it O'Donovan makes the cut for me.

Duvan Vergara - LM - OVR 67 With this being a Colombian playoff game there is still some doubt in my mind to whether the match will count towards TOTW or not but with the recent Irish inclusion I just can't ignore Vergara's hat trick. It's a risk but if the match counts he is definitely in.

Famara Diedhiou - ST - OVR 72 The first of two silver strikers making the cut from the AFCON set of fixtures is Diedhiou with the Senegalese striker managing a hat trick in their 4-1 away win over Eswatini.

Victor Osimhen - ST - OVR 74 Obviously this IF wont grab too many headlines as his POTM item will be a better version and with that one being so cheap the majority of players already own him. That being said theres no doubt surrounding the Nigerians spot in this side after he scored twice and assisted another two in their 4-2 away win over Lesotho.