FIFA 20 Team of the Week 6 Predictions

Published on by Aarong222 90 Comments 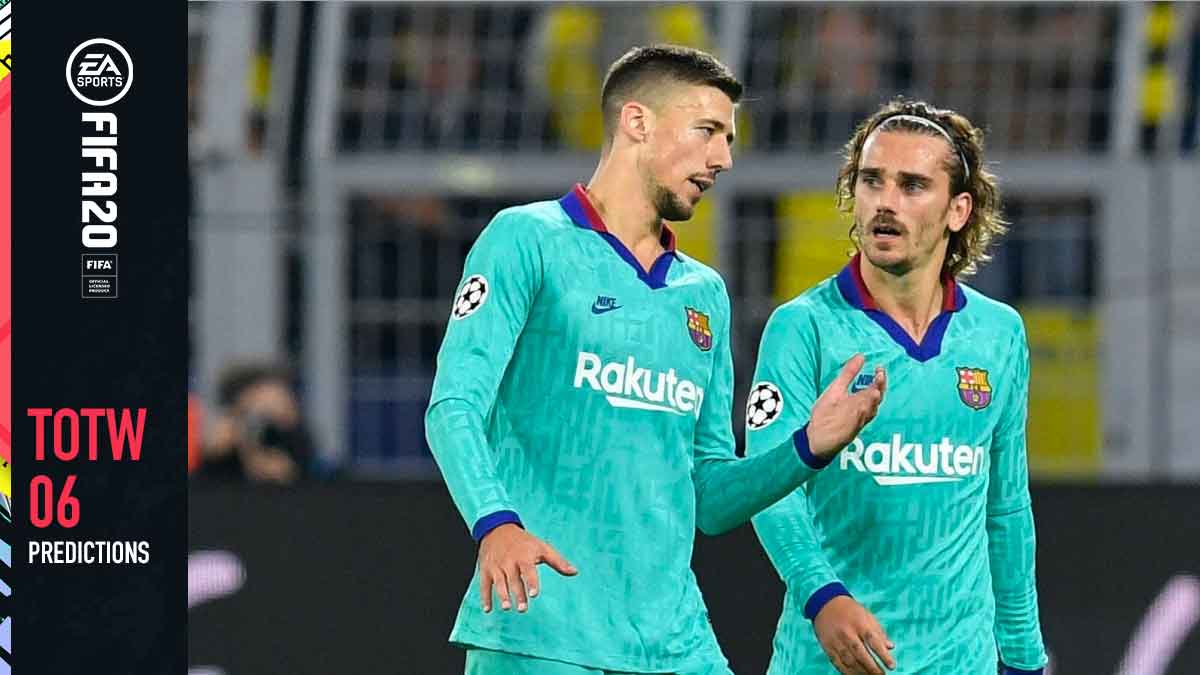 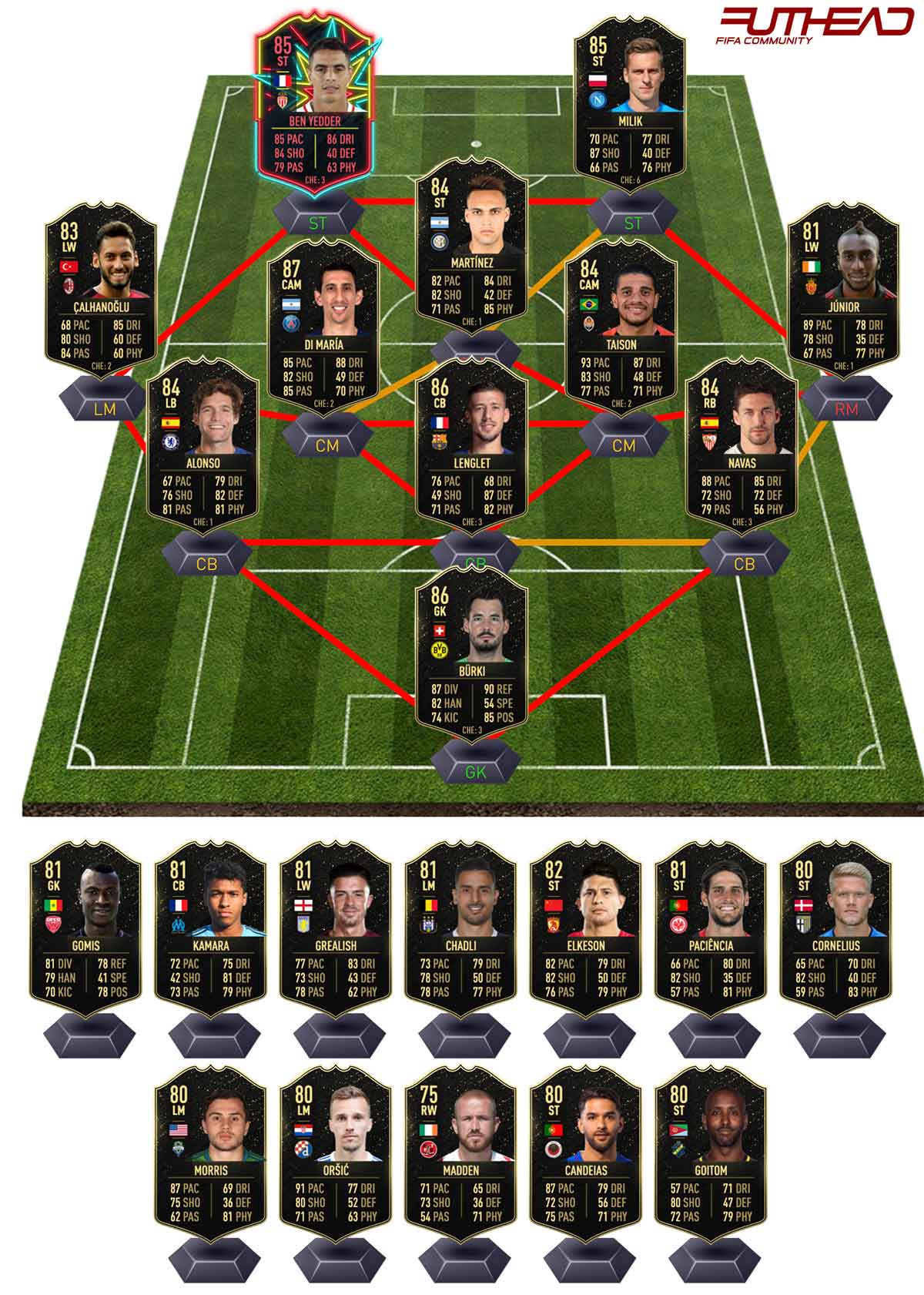 Roman Burki - GK - OVR 85 Ronnow was officially POTW in Germany with a perfect 1 match rating but with him being silver it leaves the door open for Burki, who was also brilliant between the sticks making two 1v1 saves to ensure Dortmund came away with all three points. He was awarded a 1.5 from Kicker which is usually a score high enough to be included.

Marcos Alonso - LB - OVR 81 This could easily be another Luiz situation with Alonso failing to pick up MOTM from all sources but once again with a lack of options I just can't ignore a defender in the Premier League which has scored the only goal of the game. Especially with that side being Chelsea.

Clement Lenglet - CB - OVR 85 One of the better items in a bang average week is Lenglet, who is likely to be very expensive indeed. The Frenchman assisted the first of three Barca goals and claimed MOTM in their 3-0 win over Eibar.

Jesus Navas - RB - OVR 82 Now this one's dodgy simply because of his Scream SBC but with the Spaniard playing RB rather than RM, I can see EA still including him as it wont devalue the scream item as much. He gets the shout after assisting the only goal of the game in Sevilla's 1-0 win over Levante.

Hakan Calhanoglu - LW - OVR 80 AC Milan only managed to draw 2-2 with Leece which could harm Calhanoglu's chances when you consider that Milan should be winning this fixture but with the Turkish winger grabbing both a goal and an assist he makes the cut for me.

Angel Di Maria - CAM - OVR 86 PSG deployed a unique formation this weekend for their 4-1 win over Nice. As a result of that, I am completely guessing on the actual position of ADM. I am opting for CAM however it could also go down as an RW or even a CM. That being said I fully expect him to make the side regardless after scoring twice and being awarded an 8/10 from L'Equipe.

Taison - CAM - OVR 82 Another week, another convincing Shakhtar win. The Ukrainian side made it eleven wins from eleven with a 6-0 win on Friday. Taison scored twice and assisted another making him the likely recipient of an IF.

Lago Junior - LW - OVR 75 It's often the case that when there's a big upset that a player from the said team is forced in and I expect that to be the case here with Mallorca shocking Real Madrid with a 1-0 win. Junior scored that goal and with a three-star performance from Marca should be the man to get the nod.

Arkadiusz Milik - ST - OVR 83 There were a few striker options from the Italian leagues this week but I had to narrow it down and from that list the likes of Immobile and Muriel miss out. One that does make the cut, however, is Milik, who scored both Napoli's goals in their 2-0 win over Verona.

Wissam Bed Yedder - ST - OVR 83 After multiple OTW snubs this year so far we could finally be about to see one get in. That player is Bed Yedder after he scored twice, including a last-minute winner in Monaco's 3-2 win at home to Rennes.

Lautaro Martinez - ST - OVR 81 Inter played out an enthralling 4-3 win over Sassuolo with Martinez scoring two of those four. Gazzetta went on to award the Argentine an 8/10 which should be enough for him to pick up a rather attractive discard IF.

Alfred Gomis - GK - OVR 75 Several Ligue 1 keepers are in with a shout for this TOTW but I had to go with the official keeper of the week in Gomis, especially when you consider that he made an impressive ten saves for Dijon in their 0-0 away draw with Lyon.

Boubacar Kamara - CB - OVR 75 Kamara makes it four from Ligue 1 which could be pushing it but with two of those four being big names I can still see it happening. Kamara gets the nod for scoring once in Marseille's 2-0 win over Strasbourg claiming him a spot in L'Equipe's side with a 7/10.

Nacer Chadli - LM - OVR 75 Chadli has been on the brink of TOTW a couple of times already this FIFA but now finally looks set to get the nod after he scored twice and assisted another for Anderlecht in their 4-1 home win.

Jack Grealish - LW - OVR 77 With the Premier League offering very little for TOTW the likelihood is that we will see a couple of random IF's from the division. Grealish, however, is one who deserves to be in the side after scoring once and assisting another in Aston Villa's 2-1 win.

Elkeson - ST - OVR 79 There were two Chinese league striker options and many predictors opted for the three assists of Teixeira but I have gone the other route with Elkeson, who managed two goals and one assist, accompanied by a better match rating.

Andreas Cornelius - ST - OVR 74 Although I had to ignore a few hat tricks this week when they are scored in a top league you simply can't ignore them. Cornelius managed exactly that, with all three of his goals coming during an eight-minute period of brilliance. Parma went on to win the match 5-1 at home to Genoa with Cornelius picking up MOTM.

Goncalo Paciencia - ST - OVR 76 With Ronnow being robbed simply due to being a silver item I can see Frankfurts second-best option getting the nod as a result. That player is Paciencia, who scored twice in Frankfurts impressive 3-0 win over Leverkusen.

Mirslav Orsic - LM - OVR 73 The first of five hat tricks once again to feature in the reserves section is Zagbreb's Orsic. The Croatian has scored a lot of goals this year so far and added another three to his tally during a 4-2 win away at Gorica.

Jordan Morris - LM - OVR 71 Historically we have seen an IF from MLS playoff matches forced in so when Morris managed to score three goals from LM, despite one coming during the extra time he becomes difficult to then ignore.

Paddy Madden - RW - OVR 65 The addition from the English Lower divisions this week goes to Paddy Madden after the Irishman was involved in all four of Fleetwood's goals in their 4-1 win over Burton.

Daniel Candeias - ST - OVR 73 With a lot of hat tricks being scored it can often come down to assists when deciding who to select and with Candeias having two of them alongside his three goals in a 6-0 win he really does stand out as one of the prime candidates for this side.

Henok Goitom - ST - OVR 71 We end on the on another ridiculous performance with Goitom managing to score four goals and pick up an additional assist during AIK's 5-1 win. The reserves section pretty much picked itself this week.