FIFA 20 Team of the Week 4 Predictions

Published on by Aarong222 149 Comments 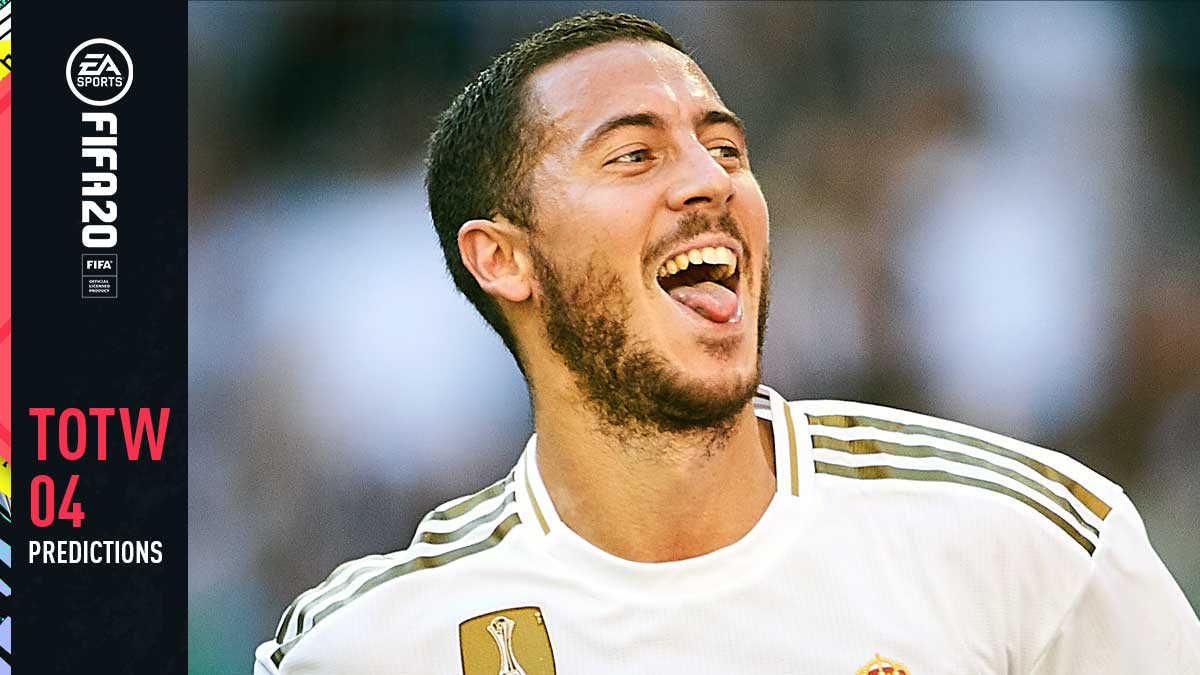 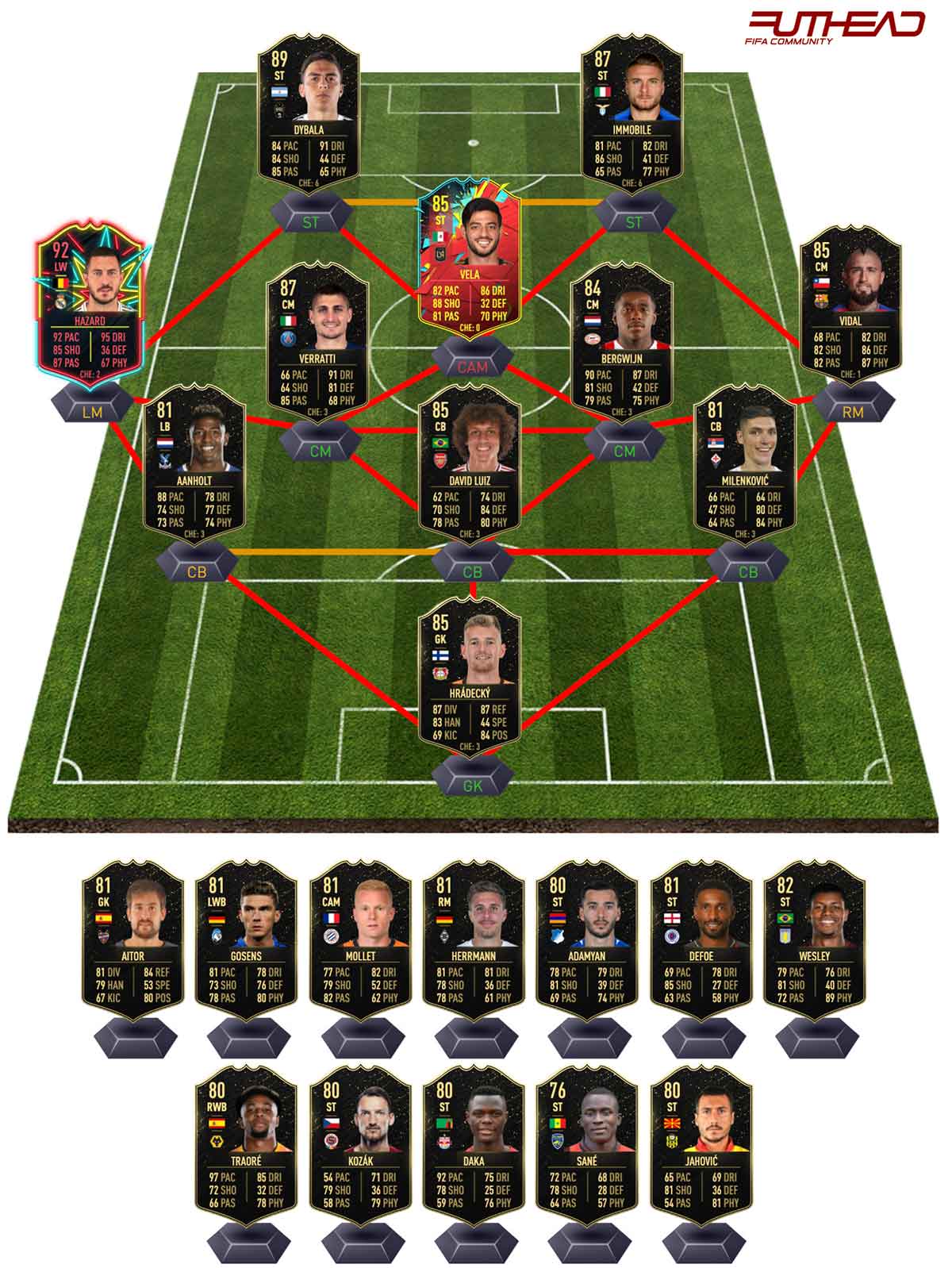 Lukas Hradecky - GK - OVR 83 Recently goalkeepers have been one of the easier positions to select and the trend looks set to continue after Hradecky walks into the side for his four saves in Leverkusen's 1-1 draw with Leipzig. The performance saw him claim keeper of the week with a 1.5 rating from Kicker.

Patrick Van Aanholt - LB - OVR 76 Crystal Palace have seriously impressed this season and now sit as high as fourth in the table. PVA managed to get himself on the scoresheet again, this time via the spot but it was his defensive side that impressed, managing to keep the inform Yarmolenko quiet down the flank.

David Luiz - CB - OVR 83 Defenders were difficult to select this week, but you would think that Luiz was an easy selection. However, the BBC failed to award him MOTM which does make him a risk. That being said, after scoring the only goal of the match and being a big name, I can't see EA going on to ignore him.

Nikola Milenkovic - CB - OVR 76 We could easily be looking at back-to-back Fiorentina CB IFs after Pezzella picked one up last week. It was his central pairing in Milenkovic's turn to shine, scoring the only goal in their 1-0 win.

Eden Hazard - LW - OVR 91 Now, I wouldn't get too excited over this one, as I actually don't think Hazard deserves a spot personally. But with him having an OTW item, I expect them to further promote the promotion with a player picking up an IF from it. Furthermore, it's the first WL and I expect them to make rewards worthwhile to draw more players in. Hazard is a player who can do that and with both a goal and assist to his name they can easily justify it.

Marco Verratti - CM - OVR 86 Most people would be expecting Sarabia in this spot and at first so was I, after the Spaniard got a goal and two assists in PSG's 4-0 win. After looking into the match more, it was clear to see that Verratti was the man to control the game though and despite not registering offensively his performance was noticed by L'Equipe, who awarded him an 8/10.

Steven Bergwijn - CM - OVR 82 The Dutch league is getting better and better when it comes to their IFs with several top end special items already for the division we look set to pick up another with a central version of Bergwijn. The Dutchman picked up a goal and two assists to claim the joint highest match rating with an 8/10, a score that Malen also picked up but with his recent IF I would expect Bergwijn to get the nod.

Arturo Vidal - CM - OVR 84 Late drama overshadowed what was a superb performance from Barcelona who despite being 4-0 up actually ended the match with nine men. There are two clear IF options from the performance with both Semedo and Vidal making a case for an IF. With a lot of defenders in contention this week I have opted for the Chilean though who will make a very nice IF.

Ciro Immobile - ST - OVR 86 There was a serious lack of strikers scoring more than once in the top divisions. With Immobile being only one of two that, I have noted down as serious contenders for TOTW. That being said, his two did come in a draw and he was awarded only a 7 from Gazzetta but that should still be enough under the circumstances.

Paulo Dybala - ST - OVR 88 For the third week running, strikers have been a serious problem when it comes to predicting which has never really been the case previous to this run. Due to that, I am taking a huge punt on Dybala, who only has one goal to his name. With a lack of Serie A options alongside the fact that Dybala was MOTM in a huge match against Inter, it could be enough for him to be forced in by EA.

Carlos Vela - ST - OVR 83 Carlos Vela entered the MLS record books in style, needing just one goal to break the single-season MLS goalscoring record the Mexican went on to score three, making my life easier as he becomes a certainty for TOTW without having to force him in on the record alone. His goals came in Los Angeles' 3-1 home win over Colorado Rapids.

Aitor - GK - OVR 76 I was thankful when I saw that Aitor was a Gold item rather than a Silver as it's likely the difference between him getting the IF or not. The Spaniard was brilliant between the sticks for Levante in their 2-1 away win, making a total of nine save alongside making a penalty save late on to keep hold of the three points.

Robin Gosens - LWB - OVR 76 With the influx of 3 ATB formations, the past couple of years we are seeing more and more shouts for IFs from these wingback positions and they are always a talking point for whether they should count for defenders or midfielders, but I usually opt for the former. Gosens picked up both a goal and an assist for Atalanta in their 3-1 win, alongside being awarded MOTM.

Florent Mollet - CAM - OVR 78 EA have been less focused on ratings as of late but with Montpellier's win coming against Monaco I can see Mollet getting the nod and his 8/10 sure will contribute towards that. The Frenchman was involved in two of those three goals with both a goal and an assist.

Patrick Herrmann - RM - OVR 77 Gladbach recorded a convincing 5-1 home to Augsburg this weekend from which two clear TOTW candidates emerged with Plea, who managed a goal and two assists narrowly missing out for teammate Herrmann, who grabbed the opposite with two goals and one assist. Herrmann also went on to pick up Kicker's POTW.

Sargis Adamyan - ST - OVR 74 Usually, I would stick to five non-gold options. But with the addition of Slimani as a sixth the other week, I am willing to make an exception considering that Adamyan scored twice in a shock win against Munich. Under these circumstances, I can see EA making another exception to the usual despite it being the introduction of Champs rewards.

Jermain Defoe - ST - OVR 76 I am expecting a fair few IFs for Defoe this year with the striker now playing his trade in Scotland for Rangers. Despite being towards the end of his career, he is still more than capable of taking his chances and he did that well this week, scoring three in a 5-0 win.

Wesley - ST - OVR 79 The BBC did me no favours this week with them selecting a random MOTM in literally every match possible, as far as to go and snub Wesley the award, despite the Brazilian scoring twice and assisting another. In situations like this, I am more than happy to ignore them and thus I have Wesley for his performance in Villa's 5-1 win over Norwich.

Adama Traore - RWB - OVR 74 Man City losing at home to Wolves was one of the biggest shocks I have seen in a long time, especially when you consider that Wolves also played on Thursday night. Traore scored both the goals and with him starting as an RWB I can't see him not making the cut, even though he is silver. The other option is Boly but someone from Wolves simply has to get in.

Libor Kozak - ST - OVR 72 As far as hat tricks go, if one was to miss out, I would expect it to be Kozak simply because of the league he is in. That being said, he does deserve to make the cut after scoring three for Sparta in their 4-0 win.

Patson Daka - ST - OVR 71 It looks as though a different player every week is scoring a hat trick for Salzburg every week. This time it was Daka's turn during their 6-0 win over Altach with the Zambian forward scoring half of those. With the Austrian outlet averaging almost five goals a game this season, I expect them to be a familiar face in TOTW.

Abdoulaye Sane - ST - OVR 66 Friday night delivered multiple options for TOTW with Sane being one of them. The Senegalese striker managed a hat trick for Sochaux as they jumped up to 2nd in Ligue 2 with a 4-0 win over Clermont.

Adis Jahovic - ST - OVR 73 We end on a player who managed to score four goals, making them probably the best performer of the week. His four came in Malatyaspor's 5-1 win over Denizlispor and as expected picked up a perfect 10 match rating for said performance.