FIFA 20 Team of the Week 3 Predictions

Published on by Aarong222 105 Comments 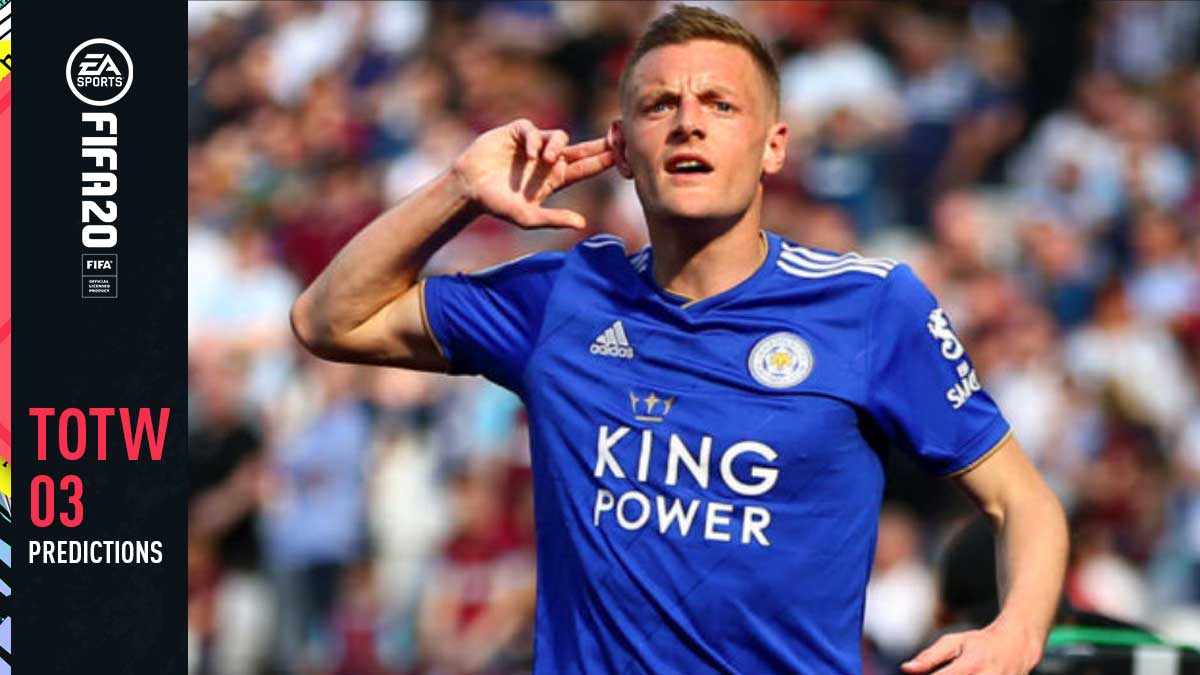 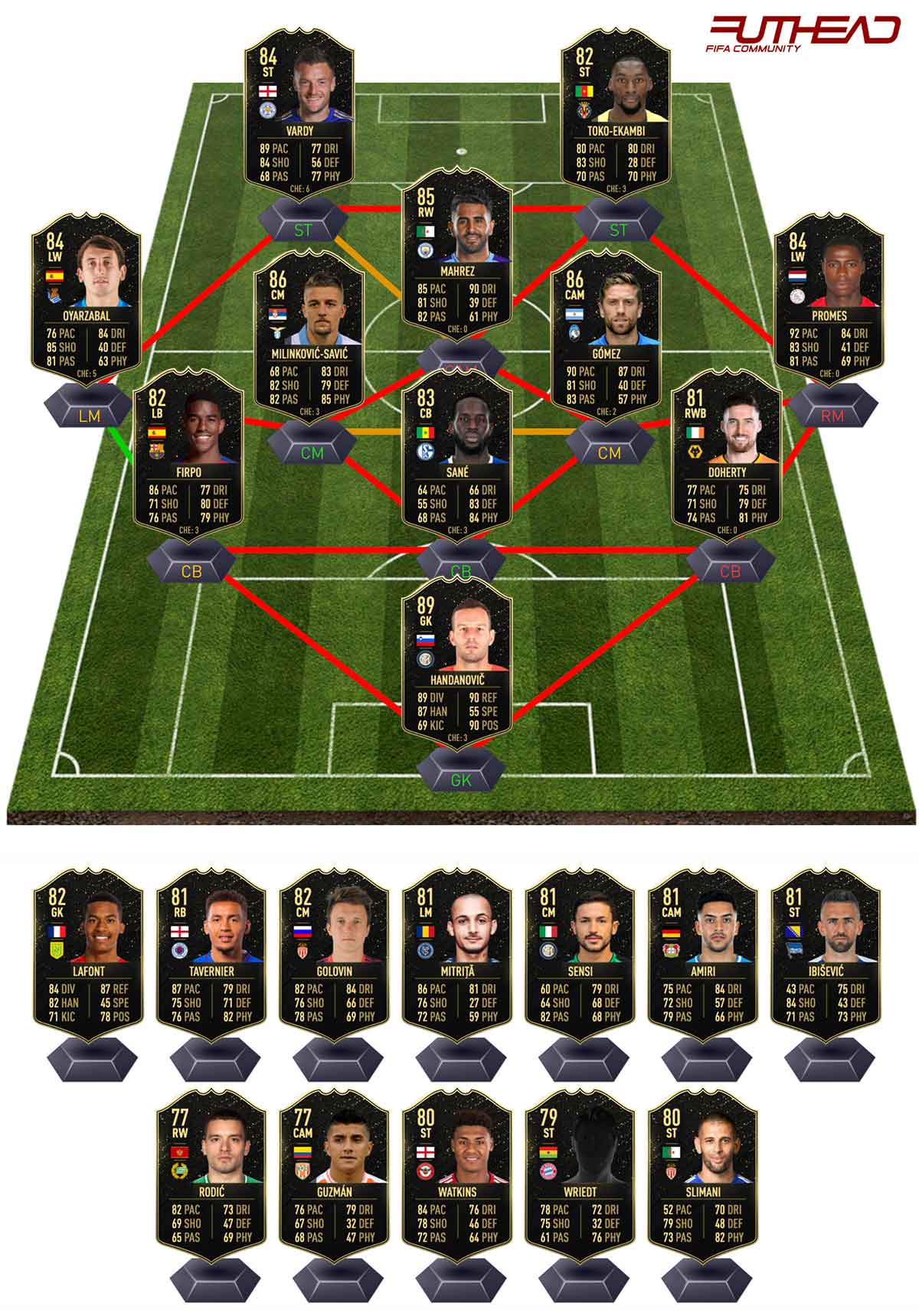 Samir Handanovic - GK - OVR 88 We start the week off with a midweek selection, something which will have a common theme in this prediction after several of the main leagues played two sets of fixtures this week. Handanovic was awarded an impressive 8/10 from Gazzetta for his four saves in Inter's 1-0 win over Lazio. A rating which we rarely see from the Italian source.

Salif Sane - CB - OVR 80 Schalke continued their good run of form and Harit was once again a big part however it was Sane who stole the headlines this week after opening the scoring and being defensively brilliant in Schalke's 3-1 win over Leipzig. A performance which saw him claim Bundesliga POTW.

Junior Firpo - LB - OVR 79 After Firpo's superb season for Betis, he earned the move to Barcelona and now finds himself starting for them. He grabbed a goal and helped towards a clean sheet despite only having 10 men this weekend in Barca's 2-0 away win over Getafe which could be enough for his first IF.

Matt Doherty - RWB - OVR 78 Wolves finally got off the mark with their first win of the season, coming via a 2-0 win at home to Wolves. Doherty looked back at his best, scoring the opening goal and causing Watford trouble down the right-hand flank throughout.

Quincy Promes - LW - OVR 82 As is quite often the case there is a lot of hype surrounding Promes, so much as to increase IF Tagliafico's price as high as 40k, well that hype is only about to increase with the Dutchman in line for an early IF. He scored three times for Ajax in their midweek 5-0 win over Fortuna and with multiple leagues playing midweek I can't see EA missing him out.

Sergej Milinkovic Savic - CM - OVR 85 The hype surrounding Milinkovic Savic is not close to the level that it has been in the past couple of FIFA's but after a couple of IF's I fully expect that hype to return. The Lazio midfielder looks set to pick up his first early on after grabbing both a goal and an assist in their 4-0 win over Genoa.

Alejandro Gomez - CAM - OVR 85 Serie A fans will be more than happy after looking at this prediction with several big-name players from the division looking set for IF's. Gomez is another who looks a certainty to make the side after he scored twice in Atalanta's 4-1 away win over Sassuolo.

Oyarzabal - LW - OVR 82 Oyarzabal was impressive in both matches for Sociedad this week but it was for the first of those two that he gets the shout for the IF from, scoring twice and assisting another in their 3-0 win at home to Alaves. With two sets of fixtures played in Spain, it was a difficult one to narrow down but Oyazarbal is near the top of that list.

Riyad Mahrez - RW - OVR 84 With a lack of both Premier League and high rated players, I had to take the punt on one or two, especially towards the end of the prediction where the last couple of spots were difficult to select. Mahrez is the lucky player to get the nod after his MOTM performance in City's 3-1 win over Everton from which he scored a freekick in.

Jamie Vardy - ST - OVR 82 Leicester were simply fantastic during their Sunday night fixture with Newcastle of which they ran away as 5-0 winners. Newcastle went down to 10 early on but regardless of that, there was no stopping Leicester. There are several shouts for an IF but Vardy is my tip after he scored two of those five goals.

Karl Toko-Ekambi - ST - OVR 79 La Liga kicked off their weekend set of fixtures on Friday night with Villarreal delivering a hefty 5-1 blow to Real Betis. Ekambi is the player set to pick up an IF from the match after scoring two of those five goals and picking up MOTM with three stars from Marca.

Alban Lafont - GK - OVR 79 For the second week running, I fully expect to get both keepers correct with both picking up huge match ratings from their reliable sources. The second of which is Lafont, who picked up a 9/10 from L'equipe after making a total of seven saves in their 1-0 win against Lyon.

James Tavernier - RB - OVR 75 We always used to say if Tavernier was a gold item in FUT he would be wracking up the IF's. Well, this is the year to put that to practice with the Rangers defender starting off as 75 rated. The first of potentially many could be on the way after he put away two penalties in Rangers 5-0 win at home to Aberdeen.

Alexandr Golovin - CM - OVR 79 It's typical that now that Golovin no longer has an otw item in the game that he throws in a world-class performance. The Russian recorded two goals and an assist for Monaco during their 3-1 win over Nice and as a result, he was awarded a huge 9/10 from L'equipe.

Alexandru Ionut Mitrita - LM - OVR 75 It was second against third in the MLS this weekend and a huge match in the eastern conference, one which NYFC came out on top in by quite some length. Running away as 4-1 winners it looks as though the eastern side is now there's to lose. As far as the match went Mitrita looks set for an IF after scoring three of those goals.

Stefano Sensi - CM - OVR 77 Another from Serie A, a league which was dominant in terms of TOTW options. Sensi's turn for a mention, a player who has been dominant for Milan since making the switch from Sassuolo. He added both a goal and an assist to his tally this weekend and could well be on his way for an IF.

Nadiem Amiri - CAM - OVR 78 I have seen many predictions opt the way of Havertz for Leverkusen's option but I am going a different route with Amiri, which although not as popular in terms of FUT, he is the more deserving of the two. The youngster was involved in two of their three goals against Augsburg, directly assisting one alongside causing the OG.

Vedad Ibisevic - ST - OVR 77 Although Ibisevic didn't start the match, which often harms the chances for players picking up IF's I can still see the Bosnian making the final cut. That is after Kicker awarded him a 1.5 match rating for his two goals in Hertha's 4-0 away win.

Vladimir Rodic - RW - OVR 67 This could be classed as a risk due to it being a Monday game but with United playing against Arsenal tonight too, I can see EA taking all games from today into account. Should that be the case then Rodic will walk into the side after scoring three goals from the wing for Hammarby in their 5-1 home win over Orebro

Yeison Guzman - CAM - OVR 67 Onto the hat tricks we go and firstly we go over to Colombia where Guzman managed to bag himself three during Envigado's narrow 3-2 win away at Bucaramanga, despite being down to 10 men for the whole of the second half.

Ollie Watkins - ST - OVR 74 Ollie Watkins could be about to make that National pride SBC a tad easier with what will hopefully be a discard IF. The Brentford striker managed to score three goals on their travels to Barnsley, coming away with a 3-1 win as a result.

Kwasi Okyere Wriedt - ST - OVR 69 Now that Munich's reserve side has entered leagues high enough to feature on FIFA I would expect to see several IF's coming their way. The first player to be awarded an IF looks set to be Wriedt, after he scored three goals in their 4-1 away win on Saturday.

Islam Slimani - ST - OVR 74 Usually, I would avoid a striker based on assists but with it coming from L'equipes rating system its another story. Slimani, who bizarrely is a silver item this year managed three assists and a goal in Monaco's 4-1 win