FIFA 19 Team of the Week 46 Predictions

Published on by Aarong222 37 Comments 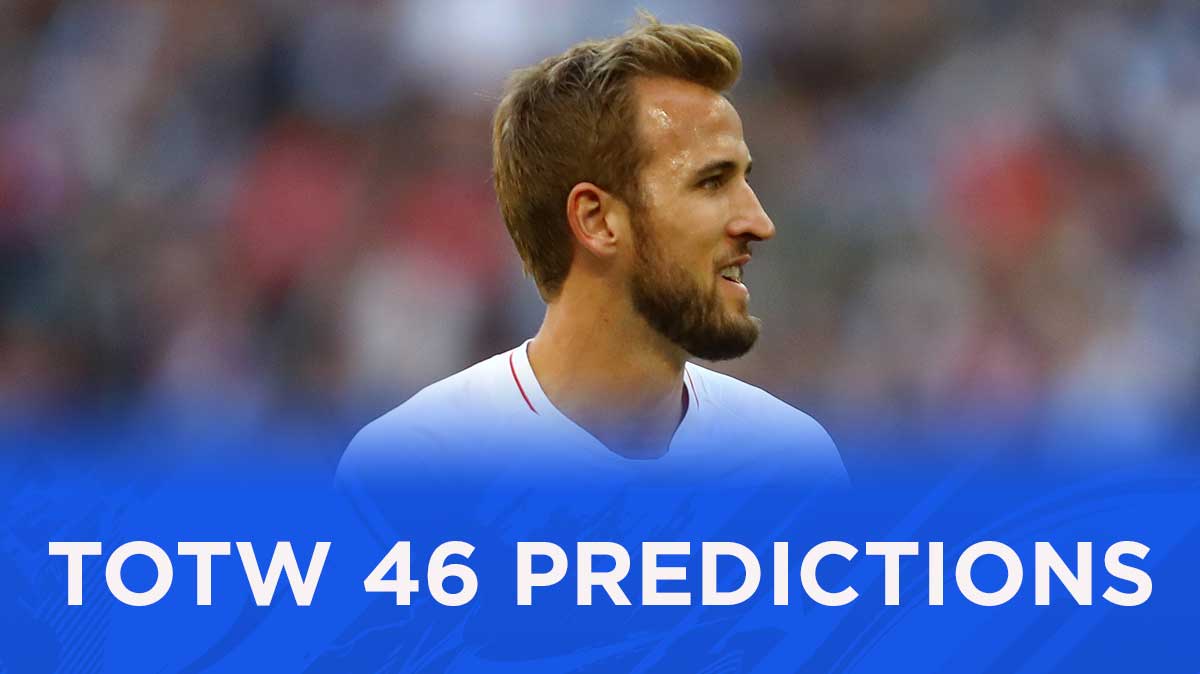 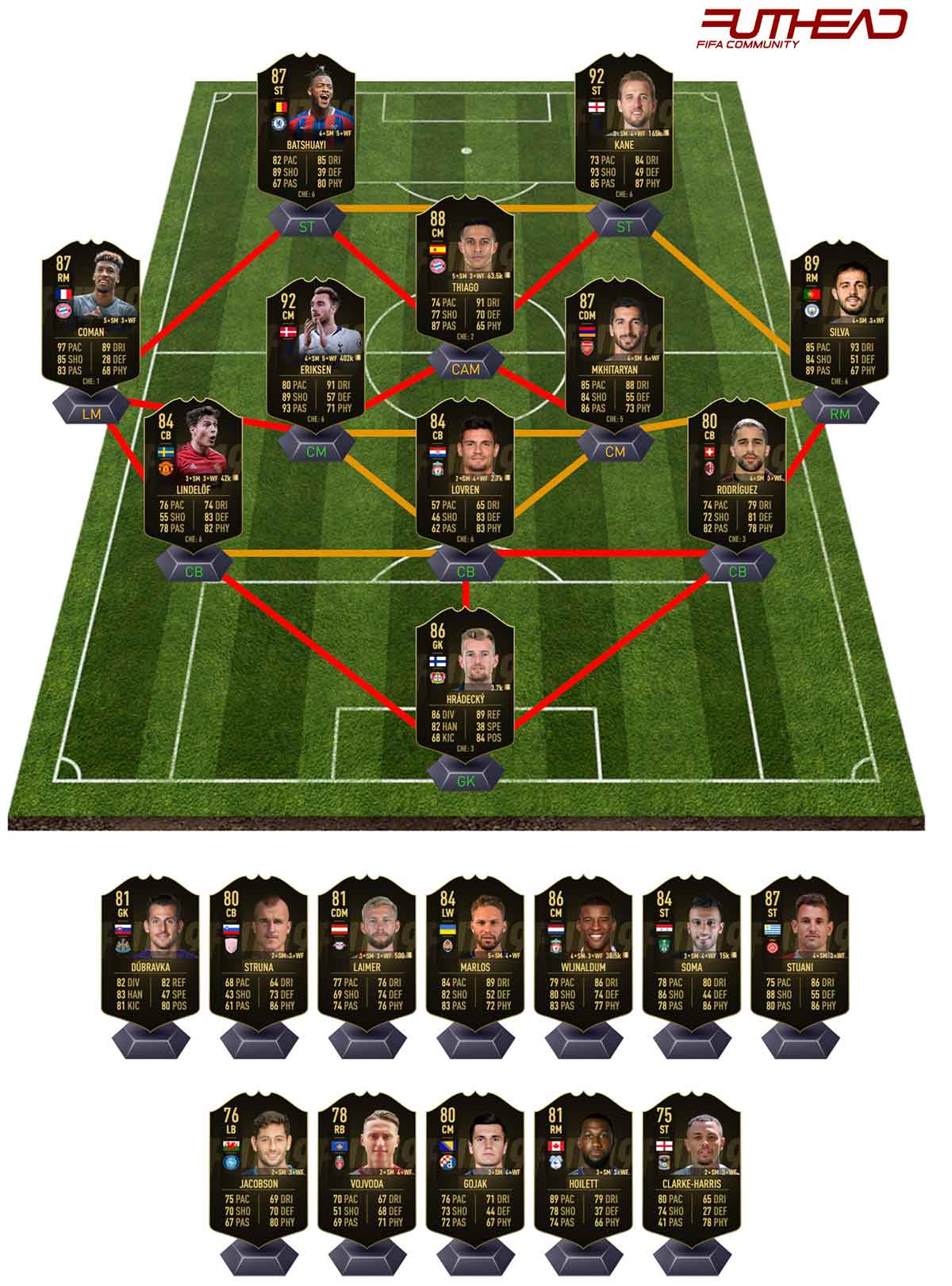 Lukas Hradecky - GK - OVR 84 There's nothing worse than selecting goalkeepers during an international break and this was no different. Hradecky put in two strong performances though making two saves and keeping the clean sheet in the first and also made six saves in their 2-1 loss to Italy. It's a huge punt but I almost literally had no one else.

Victor Lindelof - CB - OVR 79 There were no clear cut options when it came to defenders with most performing in matches which had other options as alternatives but there were still a few that I could take a punt one. The first being Lindelof who scored one of Sweden's 4-0 away win over Faroe Islands.

Dejan Lovren - CB - OVR 81 The game was pretty much already finished at 3-0 to Croatia when Lovren added a fourth late on but it was a goal which could see him go on to pick up an IF with limited competition coming his way. Especially with no real options from Croatia which after an impressive win they should see someone included.

Ricardo Rodriguez - CB - OVR 80 Although the game is all but over now there could be a very good positional change on the way should Rodriguez pick up an IF. That is after he scored one of Switzerland's four goals in their 4-0 win over Gibraltar, playing in what looks to be a CB position. As with all other defenders this week there are multiple options from the same side.

Kingsley Coman - RM - OVR 83 It's looking as though we are in for a very strong midfield in the side which potentially ends the FIFA calendar in terms of TOTW. The first of that set comes with France's Coman, who scored two of their four goals in a 4-1 home win over Albania.

Christian Eriksen - CM - OVR 88 Eriksen has actually found himself out of favour in the Tottenham team this season despite being a huge asset for them the past few years. Although Denmark was only playing Gibraltar the Danish midfielder showed just why he is rated so highly, scoring twice and assisting another in their 6-0 win.

Henrikh Mkhitaryan - CDM - OVR 84 Bizarrely its looks as though Mkhitaryan was deployed in a CDM role, but even if that was the case it's his attacking contributions which stood out as par usual with the Armenian scoring twice and assisting another in their shock 4-2 win at home to Bosnia.

Thiago - CM - OVR 87 Spain won both their games this week with the second being a 4-0 win over Faroe Islands. Both Rodrigo and Paco managed to score twice but it's Thiago who I am opting for in terms of the IF after the Spaniard picked up two assists from the middle of the park and pretty much controlled the whole game.

Bernardo Silva - RM - OVR 84 Yet another addition from the Premier League, proving the amount of talent that the league contains. Silva played a crucial role in Portugals 4-2 away win over Serbia, assisting one and scoring another before going on to win the MOTM award.

Michy Batshuayi - ST - OVR 81 Nine times out of ten the team playing San Marino will see a striker feature in TOTW the following Wednesday. With the side in question being Belgium that was further increased. They did only manage a 4-0 win which is less than expected but with Batshuayi scoring twice its still likely to be enough for them.

Harry Kane - ST - OVR 90 Although two of Kanes goals were from the spot while the other was a tap in after a goalkeeping error the fact that Kane scored a hat trick means a lot and it's pretty much inevitable that he will be making TOTW as a result. England recorded a routine 4-0 win over Bulgaria in a match which was almost a training ground game.

Martin Dubravka - GK - OVR 77 As far as punts go this ones right up there, especially as I am going off one half in terms of their second fixture but with three saves as things stand Dubravka already has a decent shot at making the side and I do expect Slovakia to hold onto this win.

Aljaz Struna - CB - OVR 72 Slovenia managing a 2-0 win over Poland was one of the bigger shocks this week in my eyes. Had Struna have been a gold item he would have walked into this side but with him being a silver item instead he becomes very hit and miss. The CB scored one of their two goals though alongside claiming MOTM.

Konrad Laimer - CDM - OVR 75 There were several options from Austria's 6-0 win this week and although more than one player could easily feature as a result it looks as though Laimer is the favourite to do so after scoring once and assisting another two from CDM.

Marlos - LW - OVR 82 Ukraine recorded a comfortable 3-0 away win over Lithuania with Marlos being the stand out player, with both a goal and an assist helping to maintain their unbeaten record in the group.

Georginio Wijnaldum - CM - OVR 82 One of the bigger clashes this week came with Germany hosting the upcoming Netherlands. It was the away side which impressed once again coming away with a 4-2 win, further showing that they have potential to seriously compete in the upcoming events. Wijnaldum looks the likely man to pick up an IF after scoring one and assisting another.

Omar Al Soma - ST - OVR 78 The Asian qualification process is something which is regularly ignored by both predictors and EA but occasionally a player is included and with Al Soma managing to score twice in a 5-2 away win for Syria I believe he stands a chance.

Cristhian Stuani - ST - OVR 80 Although Stuani and Gironi are playing in the second division now, in FIFA it still counts as a La Liga IF and thus after the Uruguayan scored three goals he looks as though hes on his way to an 87 rated IF. Girona ended the match as 3-1 winners over Vallecano with Stuani being the obvious MOTM.

Joe Jacobson - LB - OVR 66 Although the International fixtures are always going to gain preference in weeks like these, those with stand out performance domestically always stand a good chance due to the lack of fixtures. Jacobsen scored twice from defence in Wycombe's 3-1 win at home to Lincoln which makes him exactly that.

Mergim Vojvoda - RB - OVR 68 It's rare to see quite so many defensive options in one week but with them being the main ones to perform I had few other options than to include more than usual. Vojvoda makes the cut for scoring the winning goal for Kosovo in their shock 2-1 home win over the Czech Republic.

Amer Gojak - CM - OVR 71 The introduction of Zagreb meant very little for FUT this year but we could be ending the year with an IF coming from them thanks to the international break. Gojak ran the game for Bosnia in their 5-0 win over Liechtestein, scoring two of the five goals alongside assisting another.

Junior Hoilett - RM - OVR 75 In the past, I have missed the North American matches but I am trying to avoid the same mistake again with Hoilett, who looks almost certain to make the side on Wednesday. The Canadian winger claimed the match ball with his three goals in their 6-0 win at home to Cuba.

Jonson Clarke Harris - ST - OVR 65 With no hat tricks to shout about I have to take a punt on a brace and although the match ended 3-3 Clarke-Harris's brace was crucial to that singular point and thus he still makes my side.