FIFA 19 Team of the Week 44 Predictions

Published on by Aarong222 85 Comments 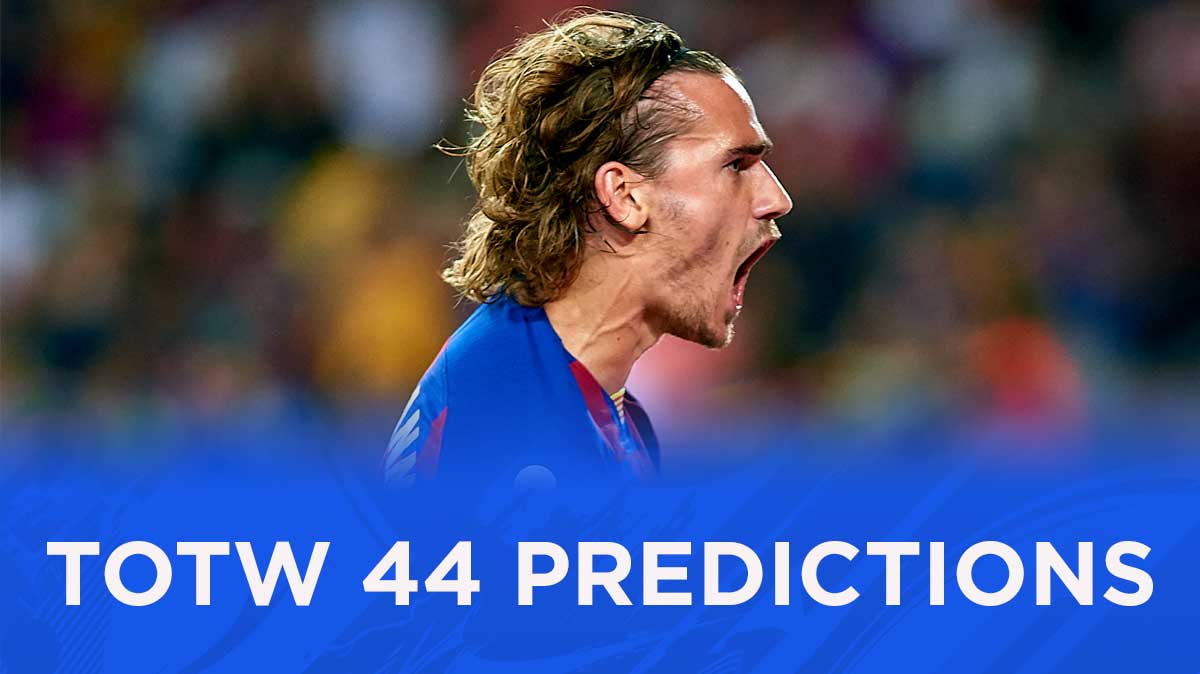 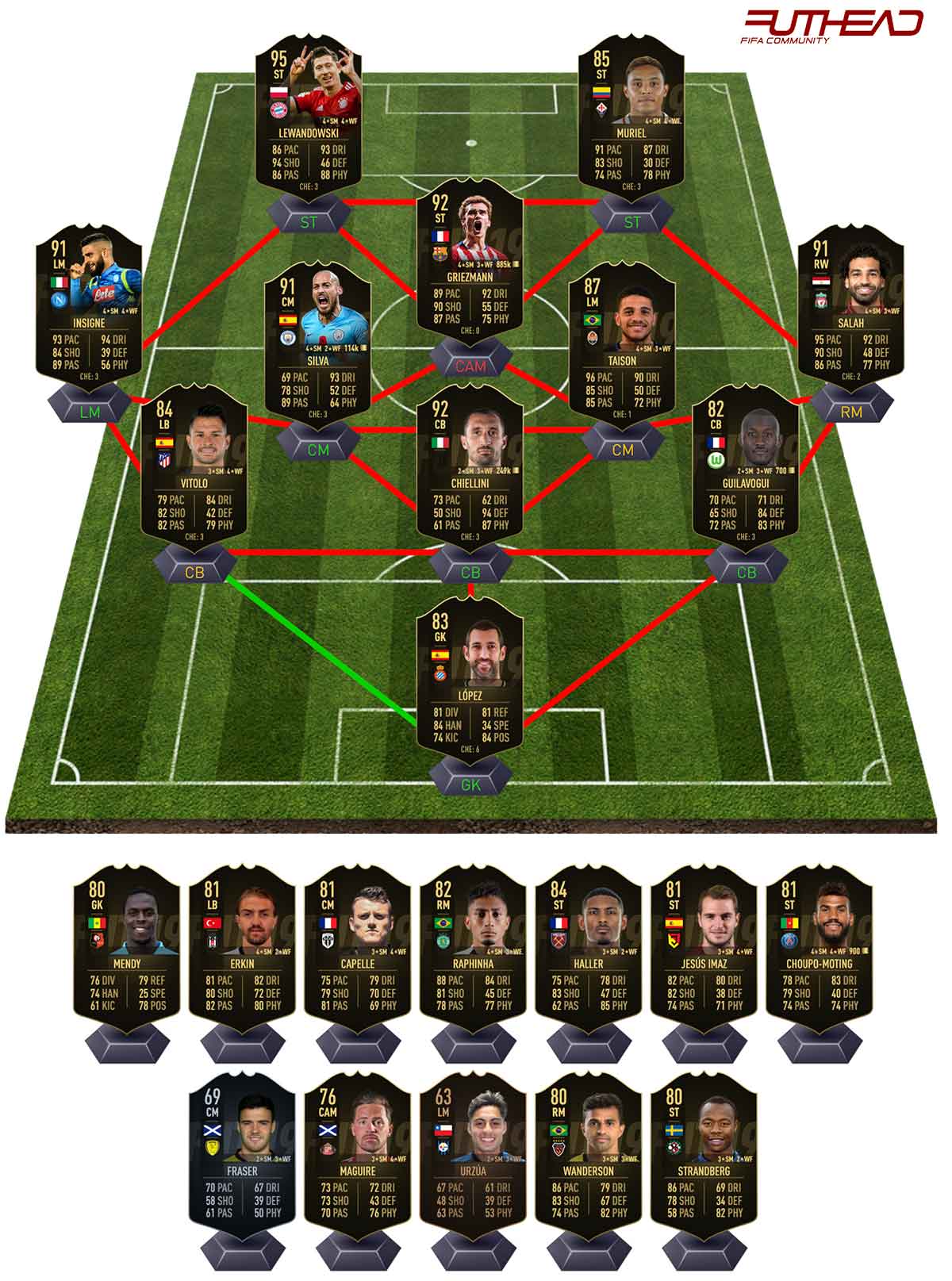 Diego Lopez - GK - OVR 80 With so many low scoring games in the Spanish division this week, it was inevitable that those included would likely be for the defensive side of the game; thus we have a punt with Diego Lopez. MARCA awarded him a perfect three-star rating despite only making the two saves, but he was there when called upon in Espanyol's 0-0 draw.

Vitolo - LB - OVR 81 Another La Liga defender comes with a positional change after Vitolo was deployed as a substitute for a seemingly an LB position. He went on to break the deadlock, which also ended up being the deciding goal. One which I can see being enough for an IF.

Giorgio Chiellini - CB - OVR 90 There are multiple big names in contention for this side and it could well be the biggest side we will see for the remainder of this FIFA. One of those players likely to feature is Chiellini after the Italian managed to score the only goal of the game in a Juventus 1-0 win over Parma.

Joshua Guilavogui - CB - OVR 79 The Bundesliga offered very in terms of options this week but it is inevitable that we will see a few included in TOTW and thus I am happy to take a punt or two on them. Guilavougui would be an interesting positional change after the Frenchman played in a CB role during Wolfsburg's 3-0 win over Hertha and claimed MOTM for his defensive performance with an impressive 1.5.

Lorenzo Insigne - LM - OVR 88 Napoli played out a seven-goal thriller when travelling to Fiorentina with Insigne's side coming out on top with four of those goals. Lorenzo himself was involved in three of the four, scoring twice and assisting another. Despite a mediocre match rating, I can't overlook him here.

David Silva -CM - OVR 89 With the number of top-end performances from strikers this week I instantly ruled Aguero out but the Spaniard was actually the official MOTM regardless of that and thus should stand a strong chance for his two assists performance for City in their 3-1 win over Bournemouth.

Taison - LM - OVR 82 Shaktar made it five wins from five, to maintain their 100% record this season via a 5-1 home win over Mariupol. Taison scored one of those five and also added two assists. With him being high rated thanks to other special items I can see him sneaking into the side.

Mohamed Salah - RW - OVR 88 I was wrong on the Salah punt a couple of weeks ago but with this one being a bigger game I can see him getting in this time around. Liverpool showed that they are real contenders once again this season with a 3-1 win over Arsenal. Salah scored two of those goals, one of which was a fantastic solo goal, making him one of only a few PL contenders.

Luis Muriel - ST - OVR 80 Muriel was in contention with several other players who scored twice this week but a major deciding factor towards the Colombian came when he was awarded with Gazzetta's official POTW for his two goals in Atalanta's 3-2 away win over Spal.

Robert Lewandowski - ST - OVR 90 There's limited room for Lewandowski when it comes to potential IFs, but as far as deserving one goes, the Polish striker is right up there this week. That is after he scored all three of Munich's goals in their 3-0 win over Schalke.

Antoine Griezmann - ST - OVR 89 One of the high profile transfers this summer was Griezmanns move from Atletico to Barcelona, Griezmann was always going to score goals for them the question was just how long will it take. Well not very long seemingly with the Frenchman adding two goals and an assist to his tally during Barca's 5-2 home win over Betis.

Edouard Mendy - GK - OVR 72 Rennes are the shock leaders after three matches in Ligue 1, winning all three of them. The latest came in the form of a 2-0 win over Strasbourg with Mendy standing out for keeping a clean sheet which included a penalty save. He picked up an 8/10 but with him being a silver there is an additional risk associated here.

Caner Erkin - LB - OVR 76 The Turkish division is often neglected of IFs. But with Erkin contributing to both a goal and an assist, alongside managing to keep his clean sheet in a 3-0 win, I find it difficult to see a side without the Turkish defender featuring.

Pierrick Capelle - CM - OVR 75 There were three players who picked up an 8/10 from L'Equipe this week and all three have in turn made my side. One of those is Capelle of whom assisted two of three Angers goals in their 3-0 win.

Raphinha - RM - OVR 79 You would expect both Porto and Sporting will be picking up IFs this week and both have difficult decisions when it comes to selecting which player that is. Fernandes picked up all three assists for Sporting but Raphinha picked up a higher match rating for his two goals and thus makes the nod instead my end.

Sebastian Haller - ST - OVR 81 Ironically after a superb season in the Bundesliga statistically but no IF to show for it, Haller could be about to pick up an IF for his first good performance for the Hammers. The striker scored two of their goals as they recorded their first win of the season with a 3-1 away win over Watford.

Jesus Imaz - ST - OVR 70 There were a lot of silver hat tricks this week but seeing as Imaz already has an IF it looks as though he will be favoured over the others. Imaz scored all three of Jagiellonia's goals in their narrow 3-2 home win over Wisla.

Eric Maxim Choupo Moting - ST - OVR 77 When you consider that Moting was playing bang average football for Stoke for parts of the past two seasons you would be surprised to see that given the chance for PSG he went on to impress, scoring twice for the reigning champions after coming on early on for the injured Cavani. L'Equipe awarded him MOTM with an 8/10 which should easily see him in.

Scott Fraser - CM - OVR 59 Midweek fixtures are always difficult to select from, especially when they come from a lower-tier side. Despite that, I can't look past a midfield hat trick and that is exactly what we have with Fraser who scored three of Burton's four in their away win on Tuesday evening.

Chris Maguire - CAM - OVR 66 There are a few sides which look to be contenders for promotion in League 1, Sunderland is one of those and with a hat trick to his name Maguire looks set to be the first to pick up an IF from those sides. Sunderland recorded a 3-1 home win over Wimbledon, lifting them to 11 points from the opening five matches, a total which all of the leading five have managed.

Javier Urzua - LM - OVR 53 Now that we have actually seen a Bronze IF this FIFA I am confident that we can see another. Urzua looks set to be the second after scoring three from LM in Huachipato's 4-3 home win in Chile. Sotelu would have made it difficult after he picked up one goal and three assists in the same match but with him not being in FIFA it only leaves one option.

Wanderson - RM - OVR 63 Usually when we see lots of hat tricks the majority come from midfielders but that was not the case here and instead, we see four hat tricks from midfield. Wanderson finishes off the four and also has an additional two assists to boast about.

Carlos Strandberg - ST - OVR 72 Another hat trick now with Strandberg, playing his football for Orebro he managed to guide them to three points via an enthralling 4-3 away win over Sirius.