FIFA 19 Team of the Week 43 Predictions

Published on by Aarong222 76 Comments Updated on 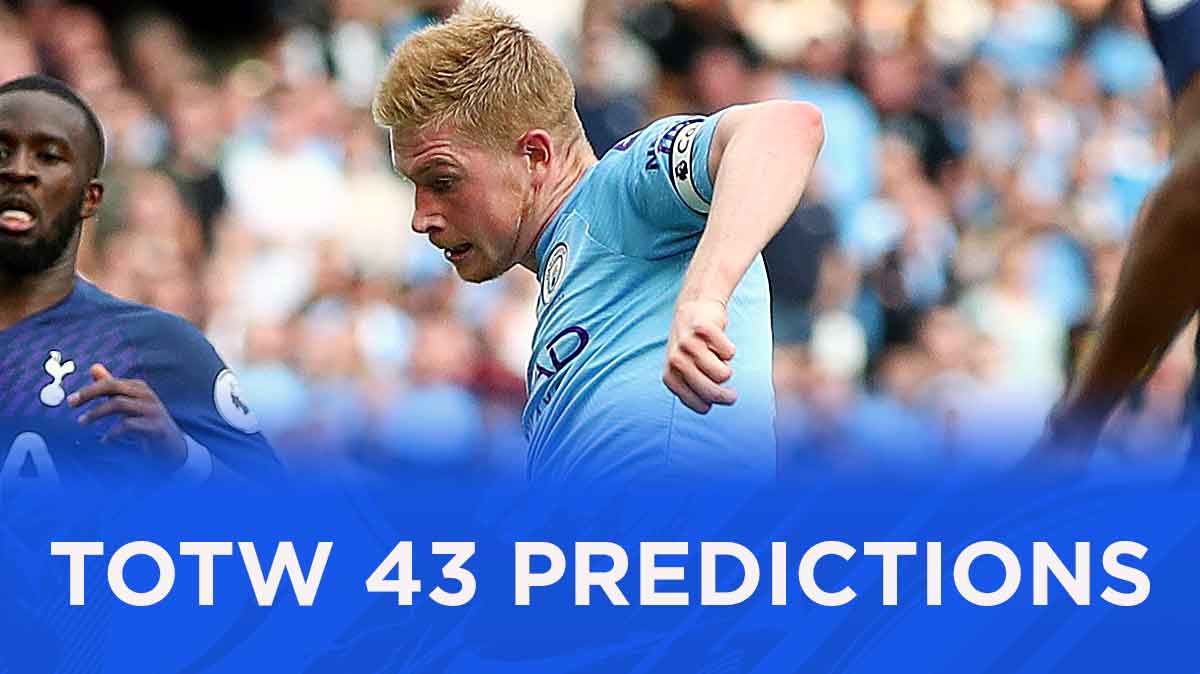 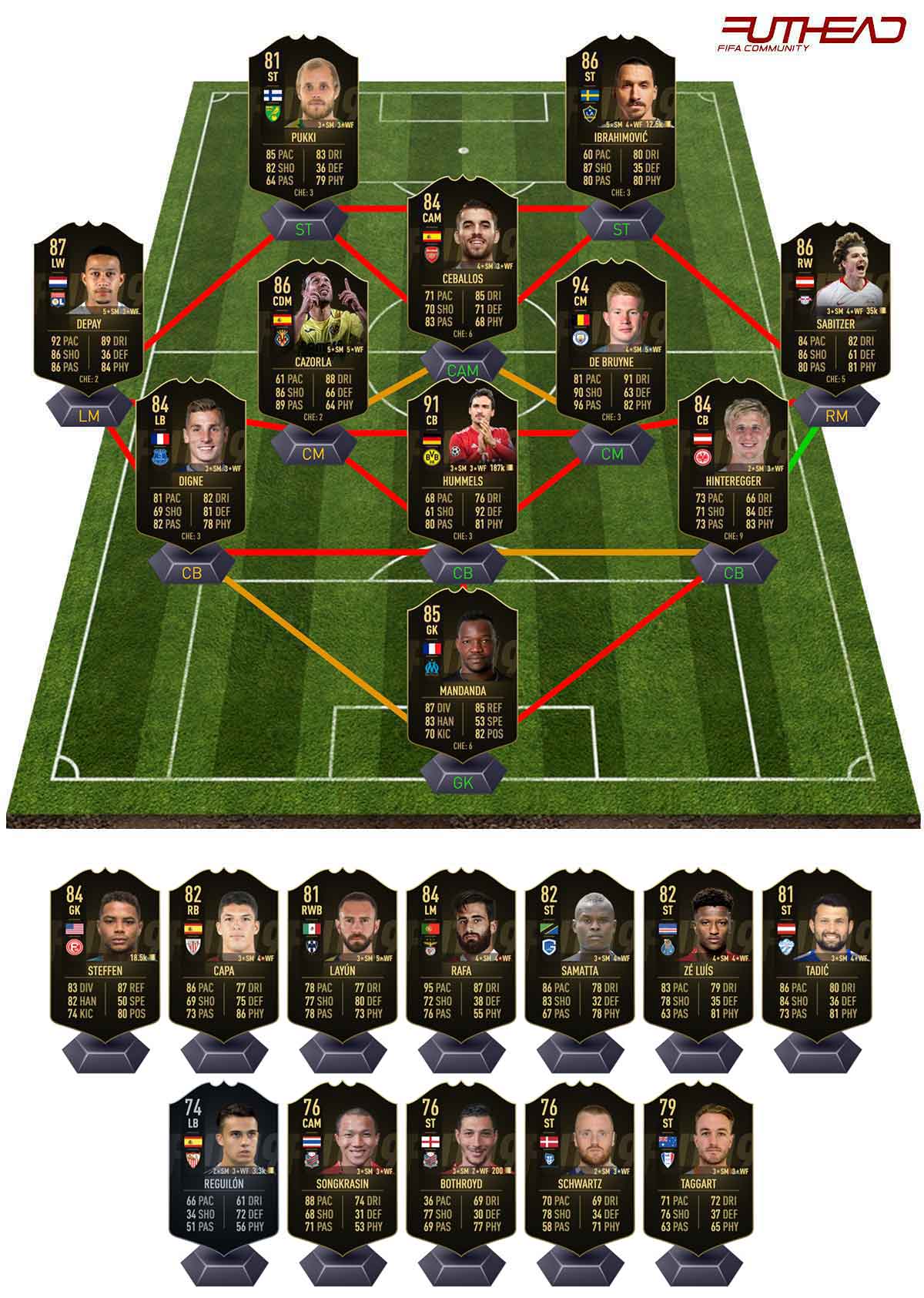 Steve Mandanda - GK - OVR 83 For the second consecutive week, we opt for a Ligue 1 keeper, this time with Marseille's Mandanda after the French stopper kept Marseille in the game with six saves in their 0-0 draw away to Nantes. L'Equipe rewarded his performance with an 8/10, making him the joint highest score of the week.

Mats Hummels - CB - OVR 89 A bit of a strange one here with the seemingly obvious choice being Paco, who scored twice and assisted another in Dortmund's 5-1 win over Augsburg, however, Hummels was officially awarded MOTM and without an IF this year alongside the fact that he had his high profile move back to Dortmund I can see this one going in the defenders favour, especially with the about of hat tricks this week.

Martin Hinteregger - CB - OVR 77 Onto a Bundesliga CB which was more expected, with Hinteregger. The Austrian scored the only goal of the match, allowing Frankfurt to come away with all three points via a 1-0 home win over Hoffenheim.

Lucas Digne - LB - OVR 81 Digne made headlines in the Premier League last season with constant attacking contributions and early signs have once again been strong for him with two clean sheets and now an assist to add to that from his second match of which Everton managed a 1-0 win over Watford.

Memphis Depay - LW - OVR 84 Lyon opened Ligue 1 in style, managing a 6-0 hammering of Angers. Three players stand a chance of an IF, all of which picked up an 8/10 from L'Equipe. On paper, I do feel that Depay is the best option with two goals and an assist from LW although could miss out due to having so many special items already.

Dani Ceballos - CAM - OVR 81 Arsenal look like they have a steal after loaning Ceballos from Real Madrid with the Spaniard becoming an instant hit among the Arsenal fans, assisting both their goals in a 2-1 home win over Burnley, making him one of the easier selections this week.

Santi Cazorla - CDM - OVR 80 It was an enthralling 4-4 draw when Villarreal hosted Granada and although there are no clear cut options from the match I can't see an eight-goal La Liga game is ignored. Cazorla was one of only two players to pick up a three-star rating from Marca and thus I have opted for him.

Kevin De Bruyne - CM - OVR 91 It was a tough campaign for KDB with multiple injury problems hampering his year but now that he looks fit and getting back to his best he is likely to be a huge addition to an already seemingly unbeatable City side. Although Spurs did hold them to a 2-2 draw City were dominant throughout with KDB pulling the strings all match which resulted in the Belgian picking up two assists.

Marcel Sabitzer - RW - OVR 81 There were two strong candidates coming from Leipzig's 4-0 away win over Union Berlin with Halstenberg being the unlucky player to miss out after scoring one and assisting another from LWB and instead we opt for Sabitzer, of whom was involved in all four goals with one for himself going alongside three other assists. A performance which saw him claim Kickers POTW.

Zlatan Ibrahimovic - ST - OVR 85 The MLS was one of the few leagues to have two fixtures fall into the cut off for this side and thus it has worked largely in Ibra's favour for my selection of the Swede with Ibra scoring twice in both matches to achieve four goals in two matches, putting him ahead of other options I have with two goals.

Teemu Pukki - ST - OVR 71 After what looked to be a slow start against Liverpool, Norwich faced a much more realistic challenge of Newcastle. One which they managed with ease, largely down to Pukki who continued his goalscoring form with a hat trick to make it four from his opening two matches.

Zack Steffen -GK - OVR 75 The substitute goalkeeper was significantly harder than the starting one once again with limited options presenting themselves. In the end, I opted for the Kicker keeper which this week was awarded to Steffen who made nine saves in a 3-1 win to kick off his life in Germany.

Capa - RB - OVR 78 An early shock came in the opening week of the new La Liga season with Bilbao recording a 1-0 win over Barcelona. Aduritz scored the solitary goal but I am instead opting for Capa who assisted the goal alongside helping keep the clean sheet.

Miguel Layun - RWB - OVR 78 Layun was snubbed last week for his goal and a clean sheet but I have opted to include him for a second week running after he grabbed both a goal and an assist in Monterrey's 2-0 win over Toluca. The position is debateable but even as an RM I feel that he stands a chance.

Rafa - LM - OVR 79 The first of two from Portugal I have selected is Rafa who was involved in both Benfica's goals during their 2-0 away win, making them one of only two teams to win both their opening fixtures.

Mbwana Ally Samatta - ST - OVR 73 Waasland looks to be one of the weaker sides in the Belgian Pro League this season and Genk only piled more pressure onto them with a 4-0 away win. Samatta scored three of those four goals and thus looks set for his SIF.

Ze Luis - ST - OVR 79 Ze Luis made the move from Russia to Portugal in order to ply his trade for Porto, a move which he has made an instant impact from, scoring three of their for goals during a comfortable 4-0 win at home to Setubal.

Dario Tadic - ST - OVR 65 There was a striker in Austria who scored an impressive four times however with him not in the game in then leaves the door open for Tadic who managed three goals for Hartberg in their 3-3 draw. Although they only managed one point the fact that Tadic would be a gold item works in his favour.

Reguilon - LB - OVR 64 With only a few non-gold hat tricks occurring this week it made the decision of Reguilon that much easier. With a goal, assist and clean sheet from LB the La Liga defender should be a certainty but seeing as he is a bronze item he becomes difficult to fit in but with it being Sevilla I expect EA to end up including him.

Chanathip Songkrasin - CAM - OVR 66 The first of two players I have predicted from Hokkaido is Songkrasin and although I don't believe that both will end up getting in with it being the Japanese league I have decided that in the long run its worth including both for an overall score. Songkrasin was awarded MOTM for his two goals and two assists in a very comfortable 8-0 win.

Jay Bothroyd - ST - OVR 66 With Bothroyd being a familiar name with English viewers after he scored a hat trick in an 8-0 win I just couldn't ignore him, despite the fact that he wasn't the official MOTM. A hat trick is always difficult to ignore though.

Ronnie Schwartz - ST - OVR 66 A second IF which comes from a 3-3 draw now, this time from the Danish league with Schwartz scoring all three of Silkeborg's goals in their 3-3 draw away at Sonderjysk.

Adam Taggart - ST - OVR 69 It's not often that you see Australian players playing abroad but Taggart decided to make the move to Korea, playing for Suwon Bluewings. He managed to score a hat trick this week during a 3-1 away win over Gangwon.