FIFA 19 Team of the Week 42 Predictions

Published on by Aarong222 137 Comments Updated on 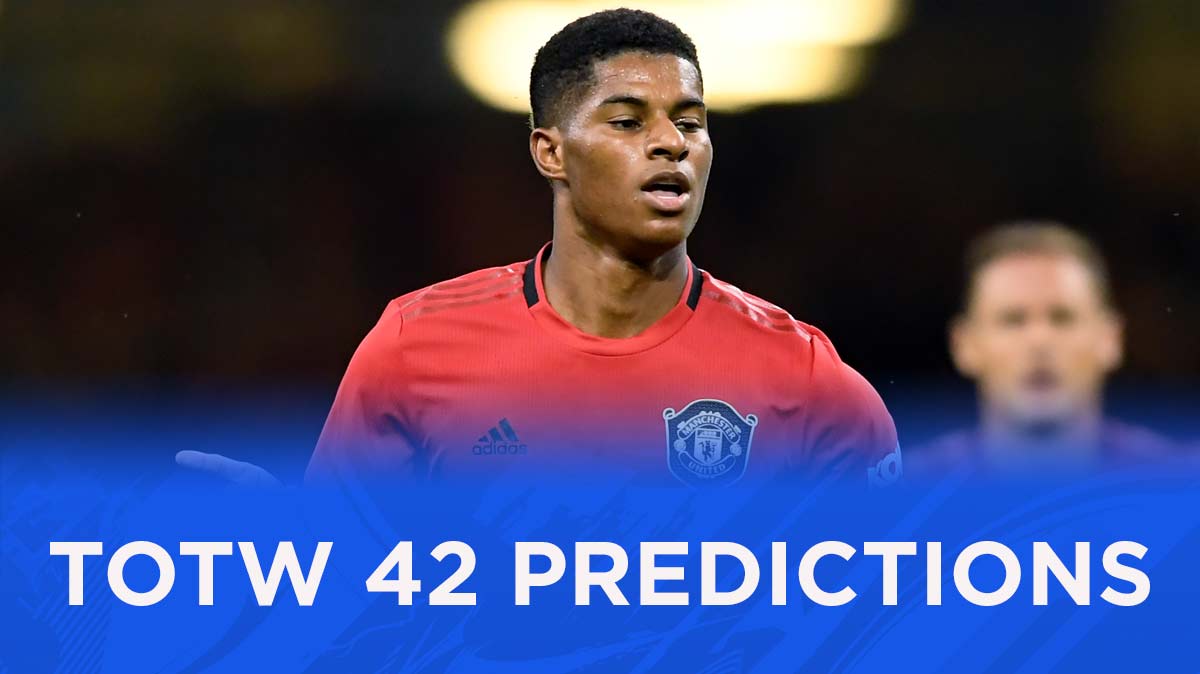 Update: Per EA France's Abdoulaye Sarr, there won't be a Team of the Week after all this week. Stay tuned, I guess! 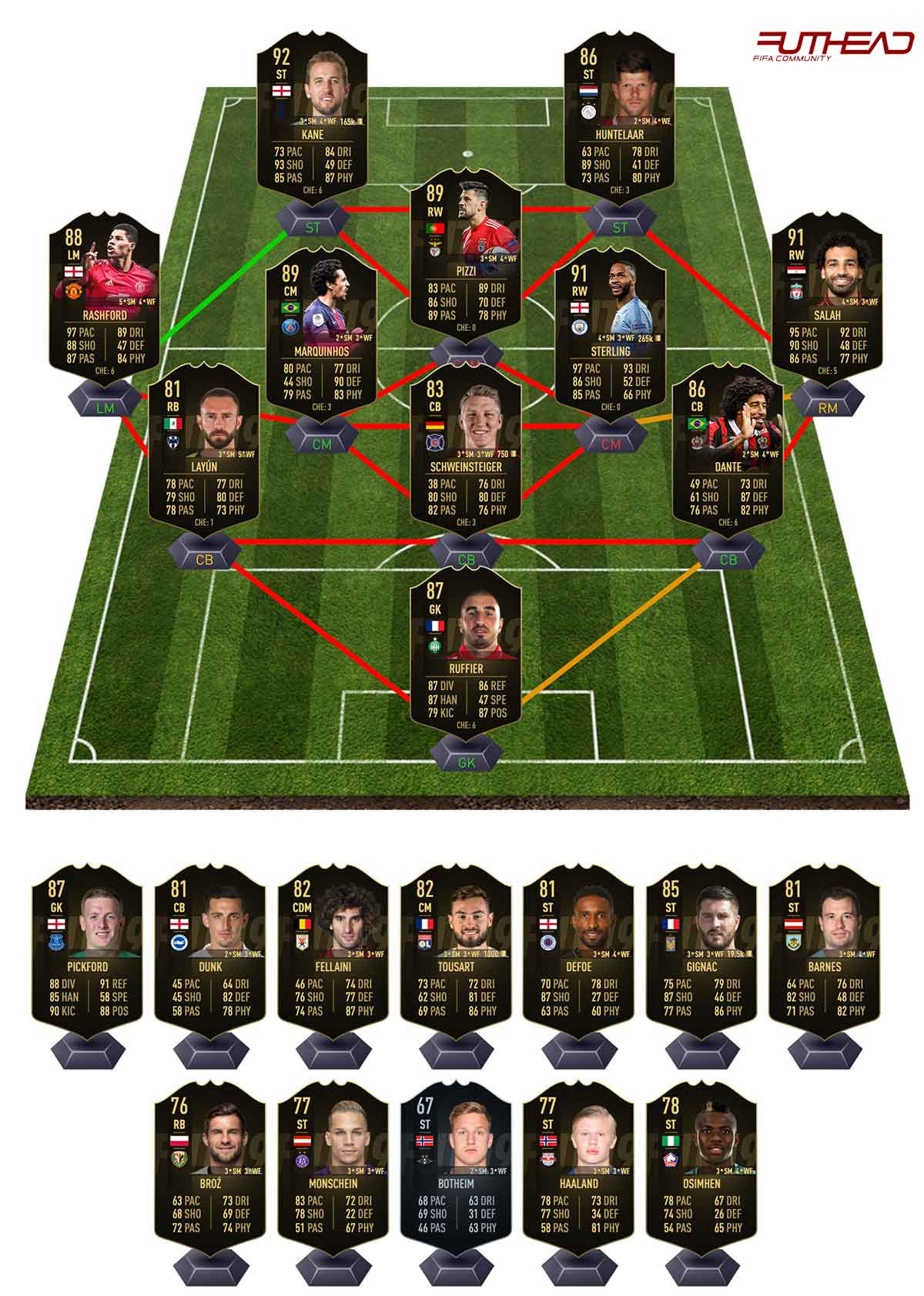 Stephane Ruffier - GK - OVR 84 With the return of the French division as per usual, we see a Ligue 1 keeper opening the side with L'Equipe being known for their high keeper ratings. Ruffier managed to pick up an 8/10 for his five saves in St Etienne's 2-1 away win over Dijon.

Dante - CB - OVR 80 With the scores level at 1-1 late on, it looked as though both Nice and Amiens were set to come away with a point each. But up popped Dante in the 95th minute to snatch all three points the way of Nice. He was awarded MOTM with a 7/10 and with only a few defensive options that should be enough for him.

Bastian Schweinsteiger - CB - OVR 80 There are a couple of interesting positional changes in this weeks side, one of which comes with Schweinsteiger. The German legend was deployed as a CB for Chicago in their 3-2 win over Montreal and still managed to contribute to the offensive side of the game, with both a goal and an assist going his way.

Miguel Layun - RB - OVR 78 The Mexican league has been in action for a few weeks now but with both Monterrey and Monarcas only recorded one win before this match it was a vital three points for the away side. Layun scored the only goal of the game, allowing Monterrey to come away with the three points.

Raheem Sterling - LW - OVR 87 You can argue with some of the bigger names in this side but one that you can't is Sterling. The Englishman picked up exactly where he left off the end of last season, scoring three of City's five goals in their 5-0 win over West Ham. Showing that once again they are the side to beat from the get-go.

Marcus Rashford - LM - OVR 82 Chelsea's side looks weaker on paper this season but I don't think many expected United to run away as 4-0 winners in the opening week. With just a couple of signings, United looked like a completely different side. Rashford scored two of those four and thus looks set to pick up the IF.

Marquinhos - CM - OVR 85 An interesting item looks to be on the way with Marquinhos after PSG opted to play him in the more advanced role of CM. He didn't offer anything offensively but still stood out enough for L'Equipe to award him MOTM with an 8/10 and seeing as though L'Equipe is what EA use, I can't look past the Brazilian.

Pizzi - RW - OVR 83 Benfica started their season off in style, winning 5-0 over Pacos to open their campaign. Had Nuno Taveras been in the game I would have opted for his goal and two assists from RB but Pizzi is also a strong candidate despite already having numerous IFs. That is after the Portuguese midfielder scored twice and assisted another, continuing his dominant performances from last season.

Mohamed Salah - RW - OVR 88 With the game coming to an end I would expect to see players such as Salah get included for less than it would normally take them and with it being the return of the Premier League a large portion of the side will come from said division. Liverpool opened their campaign with a convincing 4-1 win over Norwich from which Salah scored once and assisted another

Harry Kane - ST - OVR 90 Harry Kane is notorious for being unable to score in the month of August and with Spurs trailing 1-0 to Villa for a large proportion of the match it looked as though the trend was set to continue. Kane had other ideas and much like London buses once he scored one he then scored another with the goals coming in both the 86th and 90th minute to help Spurs turn the match around, winning 3-1.

Klaas Jan Huntelaar - ST - OVR 77 The Dutch league offered very little in terms of options but with just a few leagues in action, I am confident that they will feature one way or another. Ajax recorded a heavy win and thus it is likely that they will have a player included so despite the fact that Huntelaar only came on for 18 minutes the fact he scored twice gives him the nod from me.

Jordan Pickford - GK - OVR 83 The second goalkeeper option was significantly harder than the first to make the call on but with Pickford being awarded the BBC MOTM he stands out over other options. Although he only made a handful of saves the fact he claimed MOTM should result in him being favoured over other mediocre options.

Lewis Dunk - CB - OVR 77 Dunk was awarded Brighton's captaincy for the new season and rewarded that faith with a MOTM performance with an assist and a clean sheet to go alongside a very impressive 3-0 win over Watford from Brighton. additionally, Dunk also managed a goal-line clearance and with a lack of leagues in action, I fully expect Dunk to be awarded an IF.

Lucas Tousart - CM - OVR 79 On paper, it looked as though new signing Thiago Mendes would be getting the nod after claiming two assists but instead L'Equipe awarded the MOTM award to Tousart, who scored one of three Lyon goals as they recorded a 3-0 away win over Monaco.

Jermain Defoe - ST - OVR 77 At 35 years old it is obvious that Defoe is coming toward the end of his career, especially when you consider the fact he is now playing over in Scotland, for Rangers. He is still within the goals though and I expected multiple IF's to go his way over the course of the season. Three goals came for the Englishman as Rangers went on to demolish Hibernian 6-1.

Andre-Pierre Gignac - ST - OVR 80 Gignac is an awkward one in the sense that his player of the year item gives another IF very little room to manoeuvre but after the Frenchman managed a hat trick I simply can not ignore him here. I do think he will be a lower rating than the POTY item but statistically wise it means a very small stats upgrade.

Ashley Barnes - ST - OVR 77 There were a couple of stand out sides outside the ones you would expect from the opening game of the season, one of which being Burnley of whom recorded a convincing 3-0 home win over Southampton, who looks like an early relegation contender already. Barnes scored two of those three goals to go alongside a strong performance in general.

Lukasz Broz - RB - OVR 66 Although all the leagues are not yet back in action I do expect EA to open up with a 23 man squad rather than the 18 men they operated with before the break. That gives more of a chance to the "lesser" quality sides with the reserves section. Broz is one of those players and after scoring twice from RB for Wroclaw in their shock 3-1 win over Poznan.

Christoph Monschein - ST - OVR 67 With two Austrian league hat tricks occurring there's a chance that one of them could easily miss out and if I was to hesitate a guess on who that would be it would be Monschein. That being said both do deserve a spot in the side and thus I have included them, with Monschein scoring three times in a 5-1 away win.

Erik Botheim - ST - OVR 57 Tromso are lingering on the relegation zone midway through the season and Rosenborg have not helped that one bit, recording a convincing 5-2 home win. Botheim scored three of those five goals, making him one of only a few hat tricks this week.

Erling Braut Haaland - ST - OVR 67 Salzburg made it three wins from three with a 5-2 home win over WAC. New signing, Halland was the player to do the damage, scoring three of those five goals making him a shoe-in for this side.

Victor Osimhen - ST - OVR 68 After impressing in the Belgian Pro League last season Osimhen managed to secure a big transfer over to Lille in the top division of France. His debut went better than he would have expected, scoring twice in a 2-1 home win over Nantes, giving Lille fans something to shout about after the high profile loss of Pepe to Arsenal.