FIFA 19 Team of the Week 37 Predictions

Published on by Aarong222 44 Comments 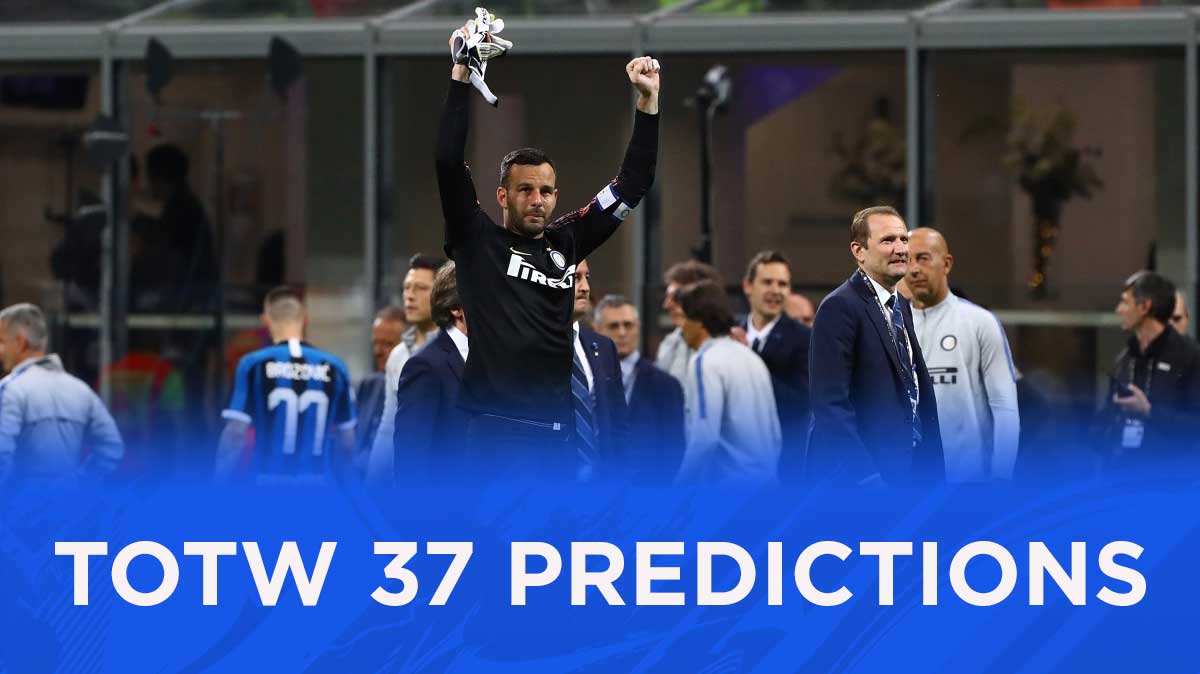 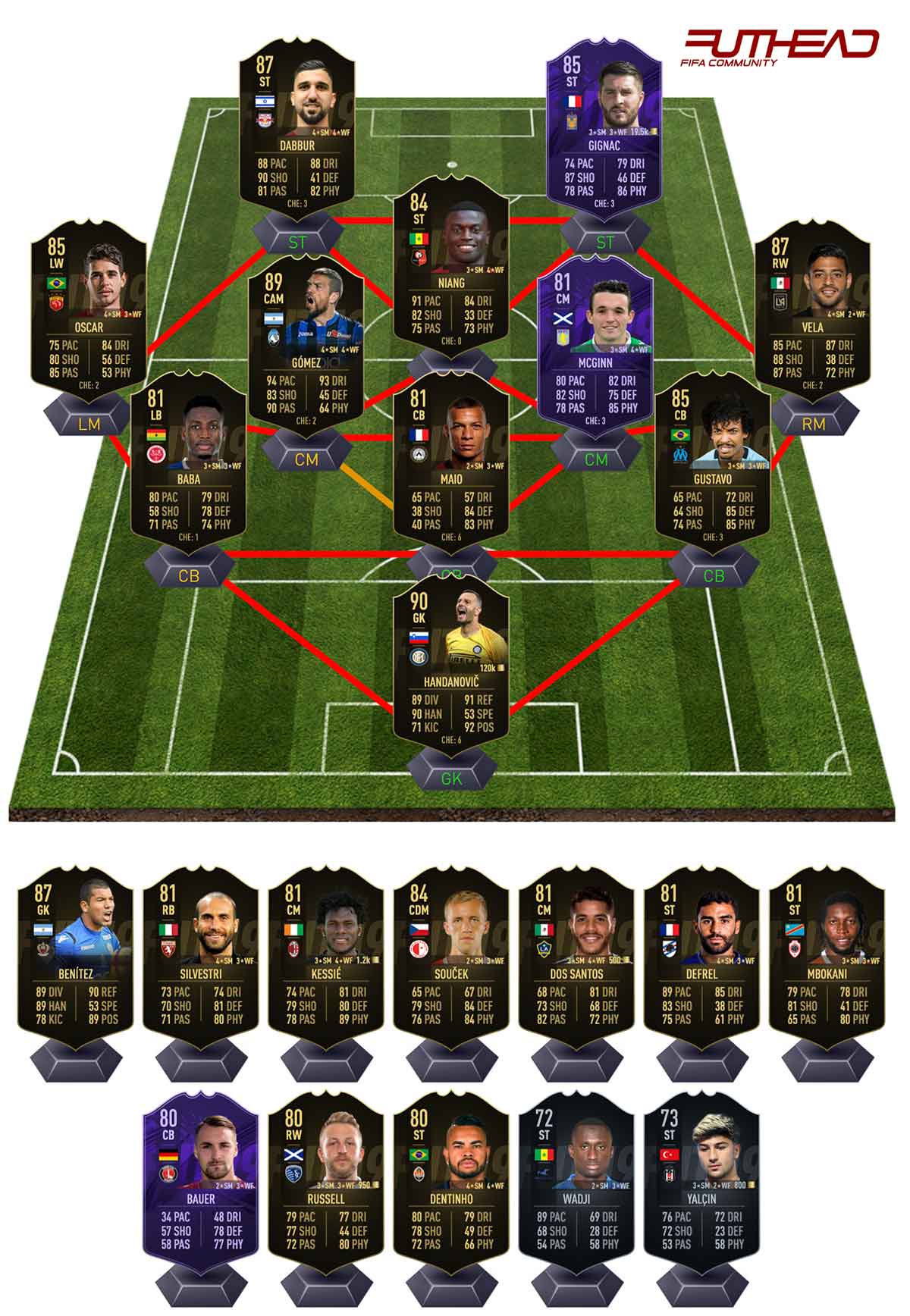 Samir Handanovic - GK - OVR 89 I'm not entirely sure why but Handanovic's three saves in Inter's 2-1 win saw him claim the highest rating I have seen in a long time from Gazzetta -- and the highest I have seen ever for a goalkeeper with a 9/10. His saves were vital in the sense that it helped Inter secure fourth spot and in turn the final Champions League position though, so that's good enough for me.

Abdul Rahman Baba - LB - OVR 76 Baba is an interesting one as you would fully expect a defender with a goal and an assist against PSG to walk into the side. But with L'Equipe only awarding him a 6/10, he becomes only a fringe option. I can't see EA ignoring this one on the limited options we have though, and thus he makes my side.

Luiz Gustavo - CB - OVR 83 We have an interesting positional change here with Gustavo operating as a CB this weekend. The Brazilian officially claimed MOTM while doing so during Marseille's 1-0 home win over Montpellier with a brilliant defensive performance from the back.

Sebastian De Maio - CB - OVR 78 Concluding what is the weakest defence of the year in terms of TOTW is De Maio. Once again the selection comes via match ratings with Gazzetta awarded the CB MOTM, with a 7/10. Udinese failed to keep the clean sheet which could harm his chances but I literally have no other potential options.

Oscar - LW - OVR 83 We have seen time and time again with the community TOTS items that once a player without an IF picks up that TOTS item that they go on to then receive an IF in the following weeks. Oscar looks set to be the first to do that this year after scoring once and assisting another in a 2-1 win.

Alejandro Gomez - CAM - OVR 84 Gomez could be set for a nice little boost before his likely TOTS in a couple of weeks time after he scored once and assisted another as Atalanta ended their impressive season with a 3-1 win over Sassuolo. The Argentine picked up an 8/10 from Gazzetta, making him one of the best players this week.

John McGinn - CM - OVR 71 I seriously struggled to fill the final five or six places in this side and thus, in the end, I have taken the punt on English playoff matches counting. Villa was the side to gain promotion to the Prem via a 2-1 win over Derby. McGinn scored the decisive goal and with him being a gold item I feel that he will be the one who gets the nod should it happen.

Carlos Vela - RW - OVR 81 Carlos Vela is destroying the MLS at the moment with goal contributions coming almost every match for the Mexican winger. His form has seen him pick up consecutive POTM awards and I wouldn't put it past him making it three. He added a goal and an assist to his name during his latest fixture which is a week with limited options could be enough for his TIF.

Mbaye Niang - ST - OVR 77 Rennes ended their season on a high, beating Lille 3-1 at home, Niang scored two of those three goals from a ST role, claiming an 8/10 from L'Equipe, one of only two players to manage so this week.

Andre-Pierre Gignac - ST - OVR 80 This one's a bit of a punt with EA being very hit and miss when it comes to including players from title wins, especially outside of the main divisions. But with a lack of options, I am willing to go with Gignac, who scored the only goal of the game in Tigres's 1-0 final win over Leon.

Munas Dabbur - ST - OVR 76 The Austrian playoff matches have been nothing short of unreliable when it comes to IFs but with a 7-0 win to their name this weekend, surely Salzburg's match will stand out. There are a couple of IF options from the match but the best one looks to be Dabuur, who scored twice and assisted another.

Walter Benitez - GK - OVR 76 Benitez is another player who looks set to pick up another IF before then going on to pick up a TOTS item after yet another top performance from the Nice stopper. In total, he made four saves in their 2-0 home win over Monaco which saw L'Equipe award him with player of the week achieving an 8/10

Lorenzo De Silvestri - RB - OVR 77 The leagues are dropping off at some pace now and with it being the final week of Italian football with this side I can see them picking up a fair few IF's. Silvestri gets the nod for his goal in Torino's 3-1 win over Lazio. Sirigu was the official MOTM but it was minimal with Silvestri being a close second.

Franck Yannick Kessie - CM - OVR 78 We saw Fabian get snubbed last week for two goals and one assist in Serie A for an average match rating and the same could happen this week with Kessie. That being said, the Ivorian does have the benefit of being the official MOTM which alongside his goals and an assist I can't see EA snubbing him too.

Tomas Soucek - CDM - OVR 75 For the next two positions, I have included midfielders with one goal to their name. They are difficult to predict but it is inevitable that a few will appear this week. Firstly we have Soucek who scored one of two Slavia Prague goals in their 2-1 Derby win against Sparta Prague.

Jonathan Dos Santos - CM - OVR 77 Secondly, we have Dos Santos, who is probably the player I am least confident on this week, and one of my least confident selections of all time in truth but he scored LA Galaxy's only goal of the game in their 1-0 win over Orlando.

Gregoire Defrel - ST - OVR 78 With Juventus already having won the title they fielded a significantly weaker side than usual when travelling to Sampdoria. That being said I still feel that because the win was against Juventus that Sampdoria will pick up an IF. There is no obvious choice though and thus we have to take a punt. Defrel is the player who I am going with after he scored one of the two goals.

Dieumerci Mbokani - ST - OVR 76 Antwerp secured European football with a closely battled 3-2 win over Charleroi this weekend, with Mbokani scoring two of those goals. Gold strikers are few and far between so although it came in a Europa League playoff match I can see it being enough for Mbokani's inclusion.

Patrick Bauer - CB - OVR 70 Another playoff selection now with Charlton being the side gaining promotion to the Championship. It didn't start well for the eventual winners with embarrassing OG opening proceedings but they managed to turn things around and Bauer was the player to pop up with the winning goal in the 94th minute for a dramatic ending.

Johnny Russell - RW - OVR 72 Despite the lack of leagues, there was still a decent amount of hat tricks which made a difficult week of predicting that much easier. Russell was one of those to score three with his coming in a 3-2 win for Kansas over Sounders.

Dentinho - ST - OVR 74 Yet another addition to the Shakhtar IF list looks to be on the way as they retained an 11 point gap at the top of the table via a 4-0 home win. Dentinho scored three of those four goals and thus looks set to earn the Brazilian his first IF.

Ibrahima Wadji - ST - OVR 62 We end the prediction with a couple of bronze options, the first of which comes from Norway with Wadji scoring three goals for Haugesund in their 4-1 away win.

Guven Yalcin - ST - OVR 63 We end this weeks prediction with Besiktas' promising young talent Yalcin. The 20-year-old striker was given the chance to shine and he took it with both hands, scoring all three of their goals in a 3-2 home win over Kasimpasa.