TOTW Predictions Team of the Season

Published on by Aarong222 250 Comments Updated on 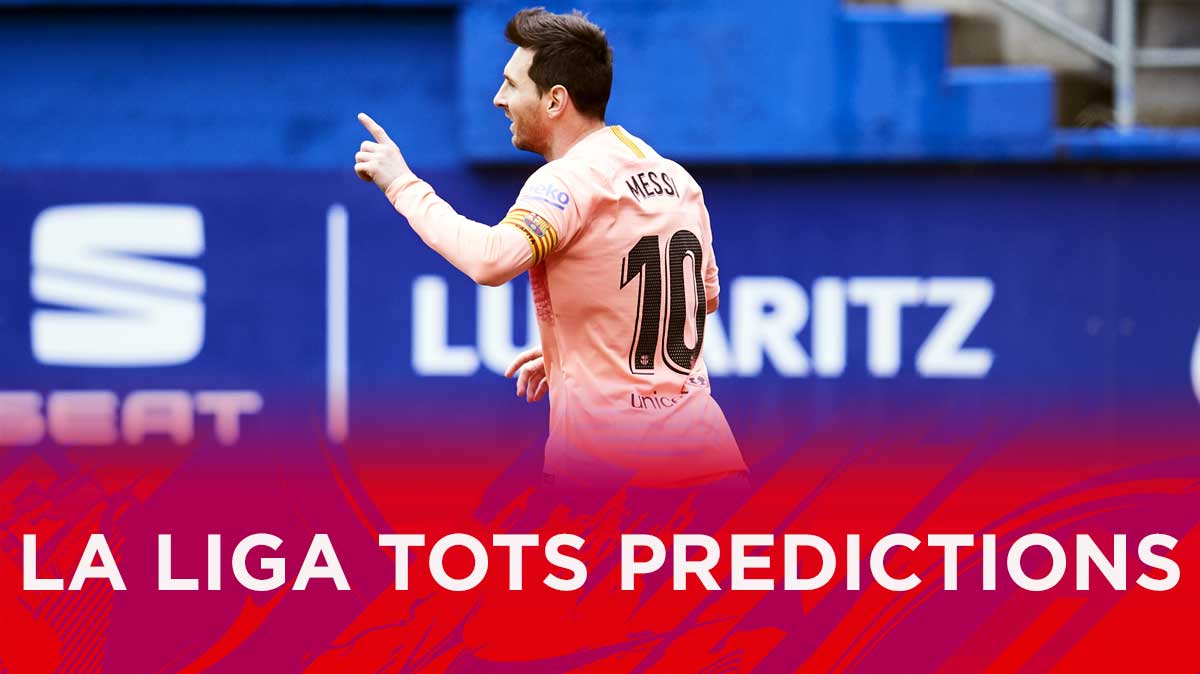 Jan Oblak - GK - OVR 90 Atletico Madrid's defensive side of the game is something which has been exceptional for the past few seasons, and once again they can claim the best defensive record in the division. Oblak has played a big role in that once again. With a mere 27 goals conceded in the 37 games, he walks into this side despite the competition.

Jordi Alba - LB - OVR 87 With another title going the way of Barcelona, it will come as no surprise that the majority of this side comes from them. Alba has always been a threat going forward, and as a result of his pace can get away with poor positioning which comes in handy for him time and time again. He chipped in with eight assists and two goals this season, which alongside the defensive record he can boast is more than enough for an inclusion here.

Pique - CB - OVR 87 In the past Pique has picked up a few questionable inclusions into both TOTS and TOTY sides, but this time there is no questioning his spot in the side. The Spaniard has played a crucial role in the Barcelona defence and although he no longer has the pace to his game, his ability to control the defence and break up plays is something which has helped Barca to the second best defensive record in the division.

Diego Godin - CB - OVR 90 As much as I was tempted to go and include Godin's defensive partner, Hernandez, I just couldn't get over the fact that he had only started 13 matches this season, something which shouldn't be enough for an inclusion despite how good he has been. Thus, instead I have opted for Godin, who has once again been a rock at the back for Atletico, helping them to that magnificent defensive record. In addition the Uruguayan has also chipped in with three goals from the back.

Sergio Ramos - CB - OVR 91 This specific selection is likely to cause a lot of controversy with Ramos having his weakest season in quite some time but there are several reasons as to why I have selected him: firstly, with six goals to his name, that's an impressive contribution from a defender. Secondly, the fact he has a TOTY item will count towards something with the Spaniard having that reputation in general. Madrid also lack options for this side, and with them finishing third, and with them having so many big-name players, I still feel that a few will be forced in for pack sales; Ramos seems an easy way to do that.

Pablo Sarabia - CM - OVR 83 Sarabia has been a regular for Sevilla the past few seasons, but he brought his game to a level nobody really expected this season, becoming one of the most influential players in the division with an impressive 12 goals and 13 assists from CM. EA noticed this and awarded him with not only a Winter Upgrade item but also a Headliner.

Sergio Busquets - CDM - OVR 89 In the past, Community/Most Consistent TOTS have been an indicator of what's to come in retrospective league TOTS. Once again that looks to be the theme with Busquets, who is in a similar situation each and every year. The Spaniard does so much work for Barcelona out of the spotlight and is widely recognised as the most underrated player around. He walks into this side yet again.

Luka Modric - CM - OVR 91 For me to see Modric lift the Ballon d'Or was a shock but there is no doubting the Croatian's ability and he has shown that at both international and domestic level now. Once again he largely quietly performed week in week out for Madrid, and although they were unsuccessful when it came to trophies in the 2018/19 campaign, Modric was always likely to claim a spot in the side.

Lionel Messi - RW - OVR 94 Without Ronaldo to challenge for the Golden Boot, Messi now dominates the award. With a ridiculous tally of 34 goals in 33 matches, 5 of which have been off the bench, the Argentine finished thirteen goals ahead of second place. In addition to the goals, he also leads the assist charts, with 13 showing just how much he actually does as a whole for Barcelona.

Karim Benzema - ST - OVR 85 By far one of the most underrated players for Madrid is Benzema. Every season he performs to a high level and every season he doesn't get the recognition he deserves. Once again it looks as though this could be his final season as Madrid's main striker, but with 21 goals to his name, he has every right to keep the spot for another season or two yet.

Luis Suarez - ST - OVR 91 Another striker with the same tally of 21 goals is Suarez. With Messi to the right of you it's always going to be a case of Barcelona's striker scoring for fun but Suarez still has the reputation as one of the better strikers worldwide and there's a good reason for that. Despite a poor showing in some key moments in European football, his standard in Spain should see him included once again.

Marc Andre ter Stegen - GK - OVR 89 I actually probably would have snubbed ter Stegen had he not have featured in the Community TOTS, not because he has been bad this season -- quite the opposite -- but simply because I feel that Oblak is the clear big name and thus it gave the option for a weaker side's stopper to make the cut, which is often the case. With the TOTS item already available through, it becomes another question.

Hermoso - CB - OVR 77 Hermoso was included in the shortlist for EA's Community TOTS, which has helped towards his selection with it being obvious that he is already in contention for EA. Even with him missing out, as seen with Maddison in the Premier League side, he could still neak in. I'm not really sure how to sell this one over the Getafe defence, but I just have a hunch that Hermoso will be featuring.

Jony - LM - OVR 75 Although they finished the season poorly, Alaves surprised La Liga with just how good they were for most the season. Multiple players from their side can argue a spot for this side. But for me, Jony looks to be the obvious bet with five goals and ten assists from the LM position making him third on total assists.

Parejo - CM - OVR 86 Parejo regularly makes TOTS and I expect the same to happen again this year with the Spaniard once again playing a large role in Valencia's side while dominating matches from the middle of the park. He has a respectable nine goals and six assists to his name which only top off his overall performances on a consistent basis.

Rodri - CM - OVR 82 I mentioned with ter Stegen about the repetitive TOTS items and this one is significantly influenced by exactly that. Without the TOTS item Rodri has already managed to obtain I don't feel that he would have made this side, or even been in contention, but EA obviously feels that he has performed better than most this season. The mess with making him tradeable actually increases his odds of selection in my eyes; had he not been, we might be having a whole other conversation.

Cristhian Stuani - ST - OVR 80 Although it looks as though Girona will be the third and final side officially relegated this season Stuani has every right to be included in this side. The Uruguayan has scored over half of Girona's 36 goals with 19 of them coming from his boot. This puts him fourth in the golden boot race, which for a side such as Girona is quite the accomplishment.

Iago Aspas - ST - OVR 85 Another side which has seriously struggled this season is Celta Vigo, the one bright side to their season has been Aspas, who without they would have been relegated this season. With 18 goals and six assists to his name, Aspas has been involved in picking up the majority of Vigo's 40 points this season, with some crucial performances coming from the Spanish forward.

Leandro Cabrera - CB - 72 OVR I almost ignored Getafe altogether which although would have been criminal was potentially the correct decision with Cabrera being a complete punt. Getafe has excelled in La Liga this season and is the surprise package in the division. A large part of their success has been down to the defensive side of their game and Cabrera has been ever-present in that back line, often picking up high match ratings.

Oyarzabal - LW - 80 OVR I'm not sure how long Sociedad will be able to keep hold of Oyarzabal, the Spanish youngster has excelled this season, managing an impressive 13 goals. He has played in numerous positions, all of which have been in the midfield or wing but with his IF coming as an LW and the majority of his matches being down the left flank I do think that should he make EA's side that he will be placed as an LW.

Santi Cazorla - CM - OVR 80 Until a late surge in form saw Villarreal climb up the table it looked as though they were going to be facing a serious relegation threat. That doesn't usually go hand in hand with TOTS selections but Cazorla has been their best player by far, making the CM stand out. He currently has the third highest assist tally with 10 and with four goals to his name as well becomes a strong candidate for TOTS.

Wissam Ben Yedder - ST - OVR 82 There were so many strikers that were in contention for a TOTS spot this season with several 14/15 goal players eventually missing out. I selected Ben Yedder over the others on two conditions, firstly his assist tally, which stands at nine is higher than all other candidates and secondly the fact he picked up a winter upgrade item from EA, showing that they have already recognised his performances this season.

Antoine Griezmann - ST - OVR 89 I actually found myself with Griezmann on the fringe of this side, hence being only on the reserves but in the end can I really leave him out, especially with him being Atletico's main goal threat, a side that finished second. Not to mention the reputation he holds. With 15 goals and 9 assists, he has played a huge role in Atletico's season, but does find himself down in 8th for the golden boot race.