FIFA 19 Team of the Week 30 Predictions

Published on by Aarong222 179 Comments 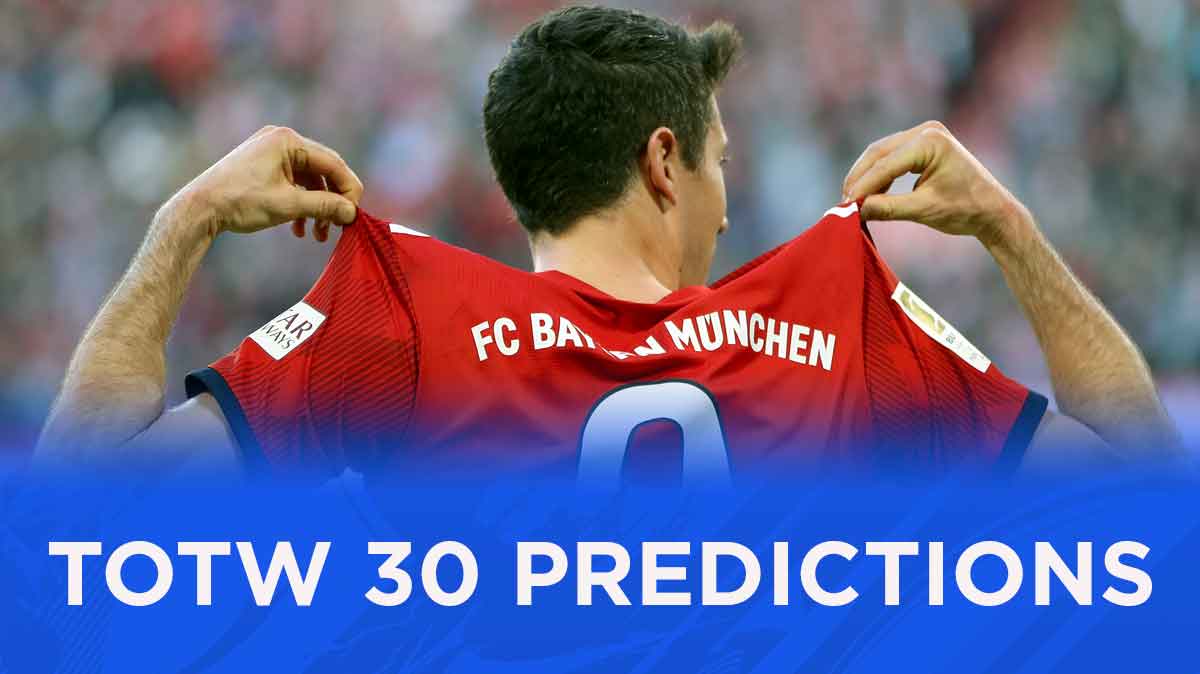 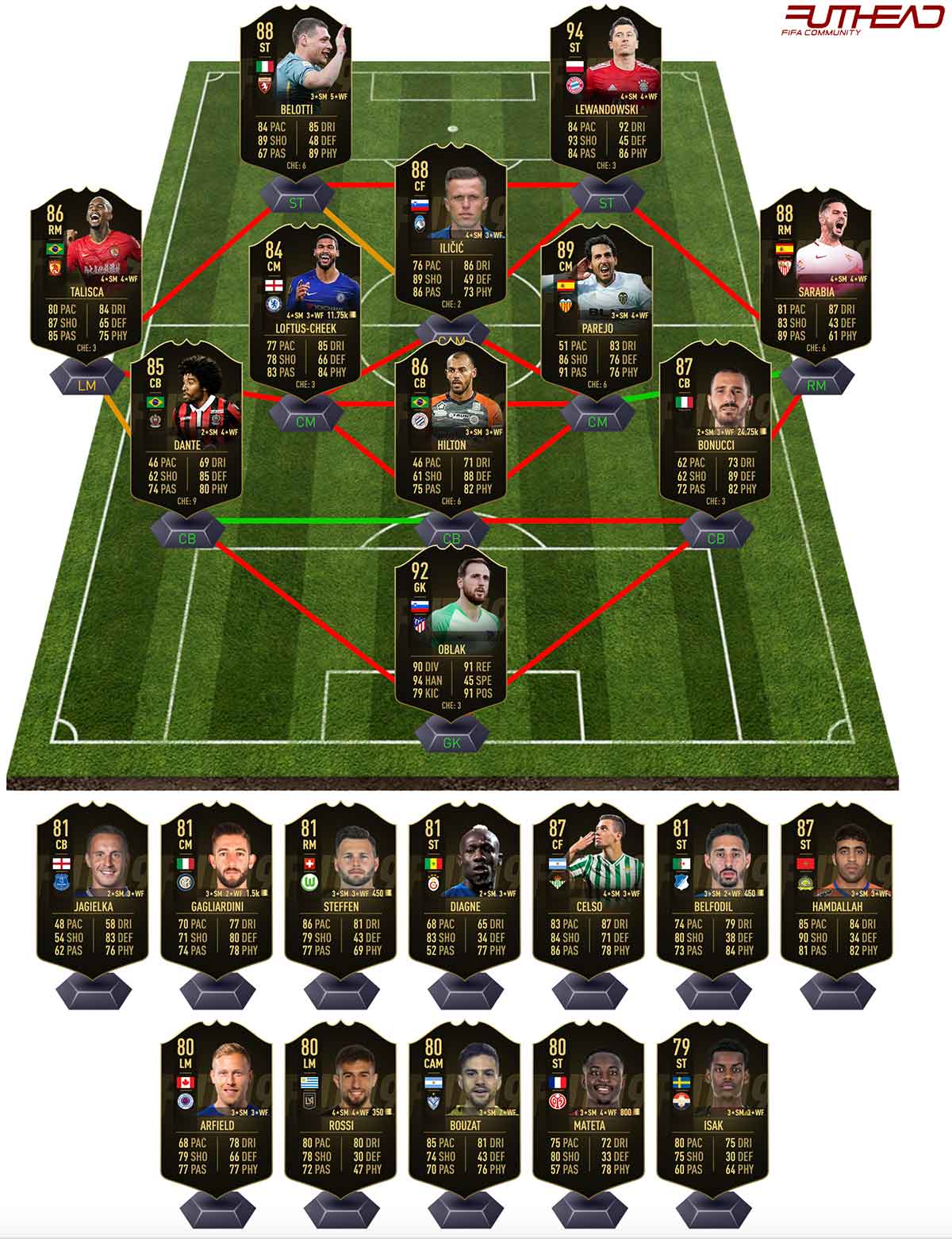 Jan Oblak - GK - OVR 90 We start the week with a big name player in Oblak, for his midweek performance for Atletico in their 2-0 win. He made a total of five saves to keep his clean sheet intact, and although Godin also scored in the match, it was Oblak who went on to receive MOTM. The IF could go either way but I expect one or the other to appear.

Leonardo Bonucci - CB - OVR 86 With so many of the top leagues in action twice this week, it gave us no shortage of options in any position with many having too many even. With a 7 match rating from Gazzetta, Bonucci is on the fringe of this spot. But after scoring in a 2-0 win, I'm not sure EA will snub his first TOTW appearance of the season.

Hilton - CB - OVR 78 It is frustrating that Hilton's fixture falls during the midweek games, as with an 8/10 he becomes very difficult to ignore. He only picked up an assist in Montpellier's 2-0 win, suggesting it was his overall performance which excelled. But that being said, it's always difficult to justify midweek matches on match rating alone. Regardless of that, it is exactly what I have done here.

Dante - CB - OVR 80 Another Ligue 1 Brazilian defender now, and with multiple shocks coming in Ligue 1 this weekend, it was difficult to select players from the league. One which stood out though was Dante, who scored the only goal of the game in Nice's 1-0 win over Montpellier.

Anderson Talisca - RM - OVR 83 It's been a while since we have seen a Chinese league player feature in TOTW, but with Talisca scoring twice, it gives the option of a high rated inclusion. Guangzhou went on to win 2-0 as a result of Talisca's brace, but it does look as though he played out wide.

Ruben Loftus Cheek - CM - OVR 77 It's good to see that Loftus Cheek is finally getting some game time for Chelsea as I still believe he has the potential to be one of the best English mids of this incoming generation. Another good performance from him midweek saw him pick up both a goal and an assist in Chelsea's 3-0 win over Brighton.

Parejo- CM - OVR 86 To pick up a TIF for as little as an assist for a CM is rare, but under the circumstances, I am happy to take the punt on Parejo to do just that. Valencia managed a 2-1 home win over Real Madrid; Parejo was the only player to pick up a three-star match rating from MARCA, and thus I expect EA to opt for him.

Pablo Sarabia - RM - OVR 83 Another Spanish midfielder in La Liga now and once again it is a slight punt. That being said, with the additional factor of a Headliner item, a goal and an assist for Sarabia in a 2-0 win does stand out much more. Unfortunately, it looks as though he played in an RM role, but that won't change his dynamic in-form options anyway.

Andrea Belotti - ST - OVR 82 I would be surprised if Belotti remains at Torino this summer after another successful year for the young striker. Another brace from the striker saw Torino pick up three points via a 2-1 win over Sampdoria. Gazzetta awarded him with an 8/10, which usually results in an in-form.

Josip Ilicic - ST - OVR 81 I have ended up including a dangerous amount of midweek games, specifically from the Italian league. But with so many top performances, I was given very little options this week. Ilicic was rated the highest with an impressive 8.5 after scoring twice and assisting another in Atalanta's 4-1 home win.

Robert Lewandowski - ST - OVR 90 Had Munich lost to Dortmund this week, it would have put them in serious trouble for retaining the league title. But they simply shrugged them off, winning 5-,0 which now makes them favourites for the title once again. Inevitably we will see at least one Bayern in-fomr, and that looks set to be Lewandowski after scoring two of the five goals.

Phil Jagielka - CB - OVR 78 Jagielka has played second string for Everton this season which has limited his chances of Team of the Week inclusions. He is usually a strong candidate for one of two in-forms in the year with an attacking presence about him. He scored the only goal in Everton's 1-0 win over Arsenal this weekend, and that should be enough to see him included.

Roberto Gagliardini - CM - OVR 78 It was an impressive 4-0 away win over Genoa for Inter as they look to secure a champions league spot for next season, moving five points clear of fourth with three points. Gagliardini scored two of those four goals, which is why he sees himself in the prediction.

Renato Steffen - RM - OVR 75 Contrary to the usual, there were only a few Bundesliga options this week. Thus Steffen's brace in Wolfsburg's 3-1 win stands out for me. Kicker only awarded him a 2 match rating, but with the MOTM award alongside that, I feel as though it will be enough for his inclusion.

Mbaye Diagne - ST - OVR 75 Although two of Diagne's goals came from the penalty spot in Galatasaray's 3-0 win, it's rare that a gold striker with a hat trick will go on to miss out on the following Team of the Week. Due to that, I opted to include Diagne, despite the competition being tough.

Giovani Lo Celso - CF - OVR 82 Betis piled on the pressure to struggling Villarreal with a 2-1 home win. The Argentine Lo Celso scored both the Betis goals from a more advanced role than he is used to. Marca went on to give him a perfect three-star rating, which is enough for me to include him in the side.

Ishak Belfodil - ST - OVR 00 I am clueless when it comes to how Belfodil is still without an in-form this FIFA. The Algerian has arguably deserved to be included on several occasions now, but this time he is all but a guarantee. That is after he claimed POTW for his hat trick in Hoffenheim's 4-0 away win over Augsburg.

Abderrazak Hamdallah - ST - OVR 74 Hamdallah's ridiculous goalscoring record continues with another three goals going the way of the Morrocan striker. It has only been three weeks since his last in-form, but with three goals to his name, he is difficult to ignore. Potentially the highest rated bench player we will see all big 5 domestic seasons?

Scott Arfield - LM OVR 73 The first of three wide midfielders I have on the reserve section goes the way of Rangers' Scott Arfield. The Canadian scored all three of their goals as they went on to beat Motherwell 3-0 away from home.

Agustin Bouzat - RM - OVR 72 When a midfielder scores a hat trick, it pretty much locks down a spot when it comes to Team of the Week predicting. That's exactly what we have with Bouzat after his three goals helped Velez to a comfortable 4-0 win.

Diego Rossi - LM - OVR 72 Los Angeles FC have started the season superbly with 16 points from their opening six fixtures. The latest three points came via a 4-0 win over DC United, from which Rossi managed to put three goals in. It's very rare that you will see three midfielder hat tricks from Silver and Bronze players in the same week, but that is exactly what we have, making competition for places very difficult.

Alexander Isak - ST - OVR 69 Although we now move away from the hat tricks momentarily, you could argue that Isak's performance was more impressive. The Swedish striker scored twice and assisted another two as he went on to claim player of the week in the Dutch division with a high match rating of 8.5

Jean-Philippe Mateta - ST - OVR 71 Usually I wouldn't go against Kicker, and it is a risky strategy none the less. But when Mateta failed to pick up Man of the Match, despite a hat trick to teammate Boetius, who is also a Silver, I just couldn't opt for the winger over Mateta. There will be a player from Mainz feature though, and thus I have gone for Mateta despite the lack of the match honors.