FIFA 19 Team of the Week 24 Predictions

Published on by Aarong222 192 Comments 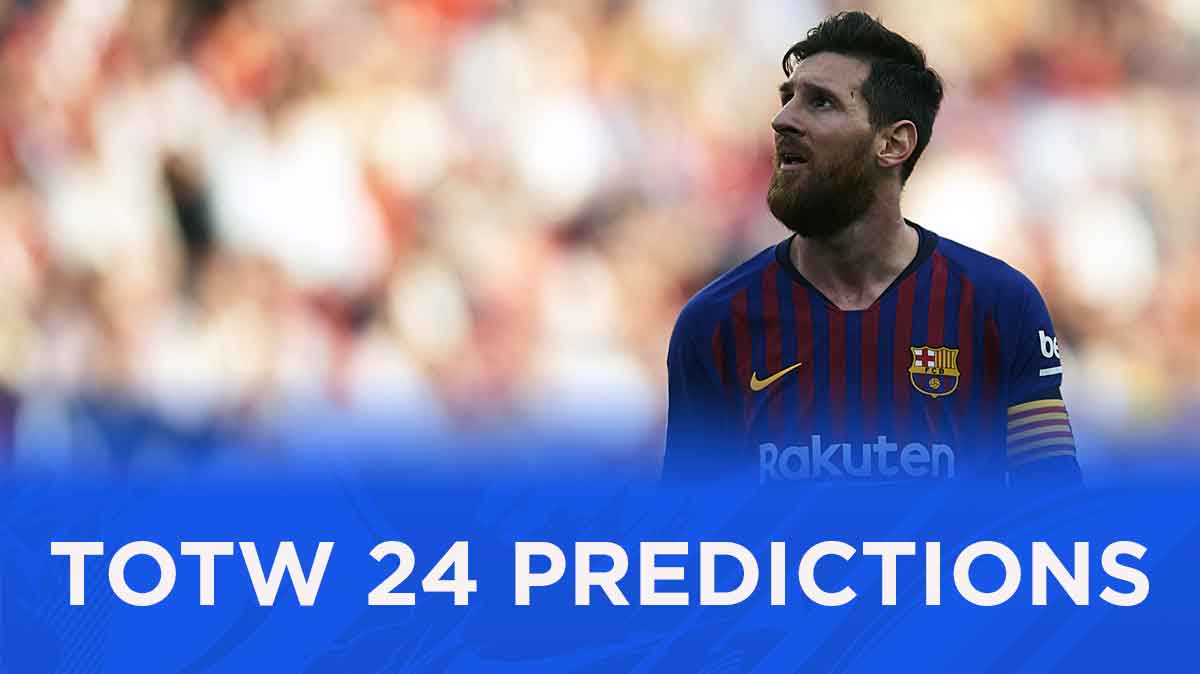 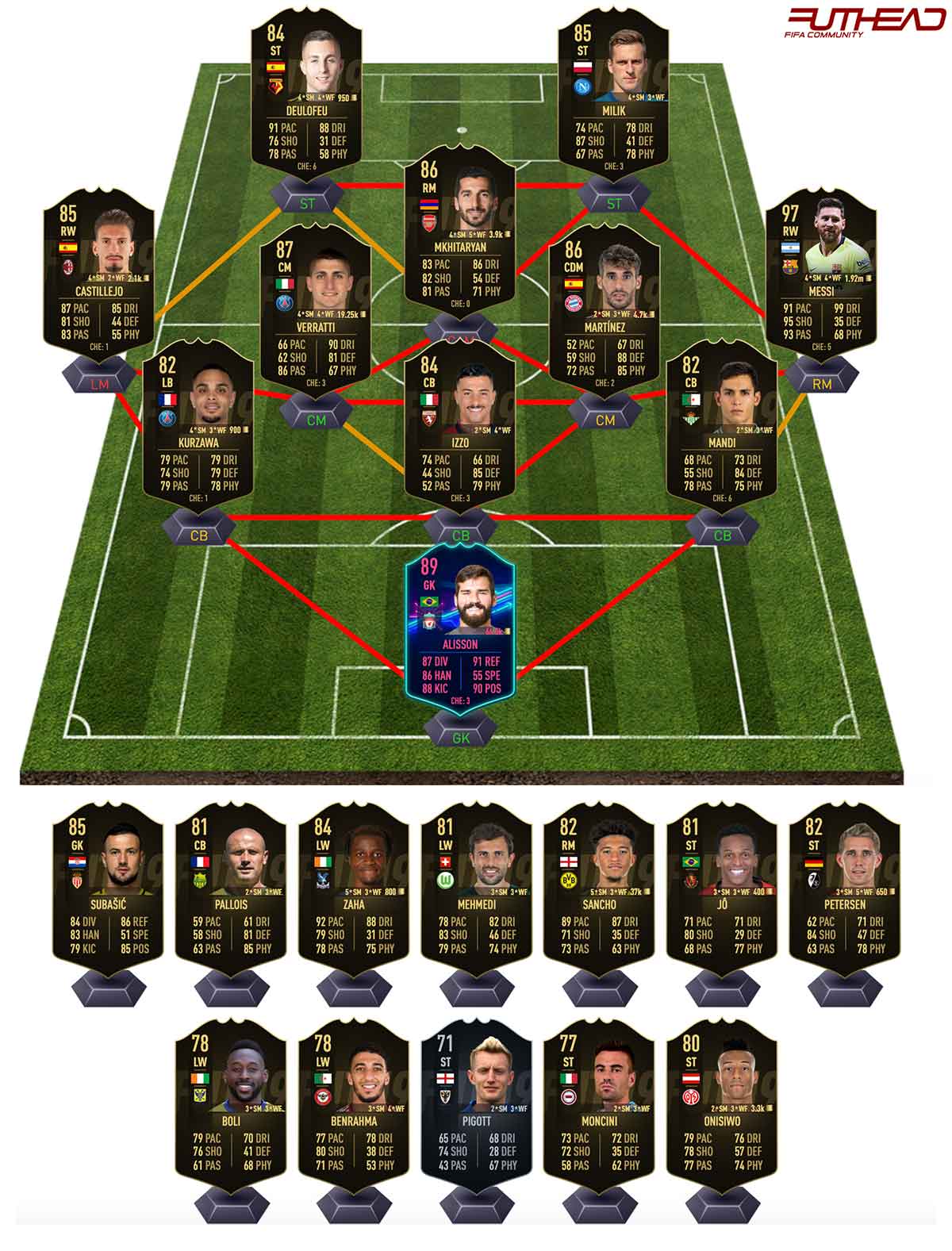 Alisson - GK - OVR 87 It's always a difficult decision to make when a big game ends 0-0 with an IF still often forced into the side. I feel as though the same will happen with Liverpool v United's 0-0 draw with no obvious candidate. The fact that Alisson has a Ones to Watch item only increases his chances. He only made a total of three saves but with not many obvious keeper options I am willing to take the punt here.

Layvin Kurzawa - LB - OVR 79 PSG played twice this week with options from both games being likely. The first comes from their 5-1 midweek win over Montpellier with Kurzawa grabbing both a goal and an assist. He claimed an 8/10 from L'Equipe which makes him the most probable PSG player.

Armando Izzo - CB - OVR 76 Recently a lot of defenders with a goal in Italy have been picking up poor match ratings and thus ruling them out of TOTW. That was anything but the case with Izzo though who is now nailed on for his second IF after scoring the opening Torino goal in their 2-0 win over Atalanta, with Gazzetta awarded him a huge 8/10

Aissa Mandi - CB - OVR 79 Outside of the obvious Messi selection, there was not much to choose from when it came to La Liga. That was made even more annoying when MARCA decided not to give ratings from the Betis game. Due to that, it comes as a bit of a punt but a goal and a clean sheet is often enough to see players included and hopefully the same occurs for Mandi on Wednesday.

Samu Castillejo - RW - OVR 83 Serie A was short on options this week with most top performances coming from players recently included in TOTW making them unable to pick up another IF. Castillejo is one of the only options viable for selection and thus I can't see him missing out. The Spaniard picked up both a goal and assist for Milan as they went on to beat Empoli 3-0 at home.

Marco Verratti - CM - OVR 86 I mentioned that options were likely from both PSG fixtures and in the end, I went with one from each. Although Mbappe scored twice, both Verratti and Silva received better match ratings and with Silva recently being included Verratti seems the safe bet here. The Italian was crucial in the middle during their 3-0 win over Nimes, controlling the match and also picking up an assist.

Javi Martinez - CDM - OVR 84 Central midfielders were few and far between this week and thus it was always likely that I would have to make a punted selection and that player is Javi Martinez. The Spaniard scored the only goal of the match as Munich recorded a 1-0 win, with Martinez claiming MOTM and making TOTW.

Henrikh Mkhitaryan - RM - OVR 84 For the first time in a long time, the Premier league was extremely difficult to select players from with the official MOTM's not reflecting goals and assists in any chances at all. Xhaka was the official MOTM from Arsenal's 2-0 win over Southampton but with Mkhitaryan scoring once and assisting another I find it hard to look elsewhere.

Lionel Messi - RW - OVR 94 Without Ronaldo in the same division as Messi its not the same with it simply being a one-man show. After scoring another three goals this weekend Messi takes his tally to 25 goals in 23 games this season. His latest treble comes away at Sevilla with the Argentine running the show from start to finish.

Arkadiusz Milik - ST - OVR 82 With a recent winter upgrade going the way of Milik this IF now looks significantly better than it previously would have done. He gets the nod after scoring twice for Napoli in their convincing 4-0 away win over Parma. The Polish striker picked up MOTM with a 7.5.

Deulofeu - ST - OVR 81 The quality was always there when it came to Deulofeu that was obvious with the ex Barcelona youth player keeping his ST spot for Watford despite failing to find the net in a long time. He finally turned up against Cardiff, during Watford's 5-1 hammering of them with Deulofeu scoring three of those goals alongside assisting one of Deeney's two.

Danijel Subasic - GK - OVR 83 Monaco are finally starting to pick up some points which they are in desperate need of. Three wins in four now has resulted in them climbing five points above relegation. The latest three points coming via a 2-0 win over Lyon with Subasic being crucial to that win. The Croatian stopper made a total of four saves with one of those being from the spot in order to maintain his clean sheet.

Nicolas Pallois - CB - OVR 77 Another Ligue 1 defender now with Pallois being the only goalscorer in Nantes 1-0 victory while hosting Bordeaux. Pallois has been snubbed a few times already this year and is far from certain but I feel that he has done enough to sneak onto the bench.

Jadon Sancho - RM - OVR 79 I would go as far as to say that Sancho is now the most hyped English youngster coming through, after his breakthrough season, aged just 18 at Dortmund which has seen him develop into one of the most important players in the division let alone his team. He scored once and assisted another from RM during Dortmund's 3-2 win over Leverkusen.

Admir Mehmedi - LW - OVR 77 The position of Mehmedi is largely up for debate but with him coming on to replace a LW that is seemingly the safe bet. After coming off the bench the Swiss player changed the match, scoring twice to confirm the three points for Wolfsburg and claimed MOTM for doing so.

Wilfried Zaha - LW - OVR 82 Although I usually rely on the BBC MOTM I have to contradict them here and opt for Zaha. The Ivorian played out on the wing rather than the ST role he has been deployed in recently and scored twice during an impressive 4-1 away win over Leicester from there. With not many PL options this week I just couldn't ignore a brace from LW.

Jo - ST - OVR 76 In the past, we have seen the resumption of leagues result in an IF, even in cases which there were better options elsewhere. With the lack of strikers being available, specifically gold options I can see both these factors working in Jo's favour. The Brazilian helped kickstart Nagoya's season with a 4-0 away win from which he scored twice.

Nils Petersen - ST - OVR 79 In comparison to last season, Petersen has been extremely quiet, considering he picked up three IFs and ended the year with a 94 TOTS item. So far this season he has just his 79 rated NIF. He does however finally look like picking up his first boost after finding the net twice during Frieburg's 5-1 win, claiming MOTM with a 1.5 for doing so.

Yohan Boli - LW - OVR 68 The reserves picked themselves this week with even the midfielders getting in on the hat tricks, the first is Boli of whom played in a LW role for Sint-Truiden in a 3-1 home win from which he scored all three goals.

Said Benrahma - LW - OVR 68 Brentford made it four wins from five as they cruise away from the relegation zone. This time the three points came via a 5-1 home win over a decent Hull side. As is often the case with Brentford, Benrahma played a big part in their success. With the Algerian scoring three and assisting another from LW.

Joe Pigott - ST - OVR 61 Despite TOTW going for so long now, there is still no clear indication or consistency when it comes to midweek fixtures. Had there have been another option it would have been Pigott who missed out for me but after a hat trick from the ST he enters the side as the final selection for me.

Gabriele Moncini - ST - OVR 67 Cittadella climbed into the promotion playoff spots with a 4-1 win over Leece, another side in the promotional playoffs as it stands. It could prove to be a vital three points come the end of the season and Moncini was a large reason they managed it, scoring three of those four goals.

Karim Onisiwo - ST - OVR 72 This weeks player of the week in Germany went the way of Onisiwo, which is frustrating for predicting as I feel as though I have to force him in over options that I would say are stronger. Either way after scoring two of three Mainz goals in their 3-0 win over Schalke it looks as though he is set for TOTW 24.