FIFA 19 Team of the Week 23 Predictions

Published on by Aarong222 108 Comments 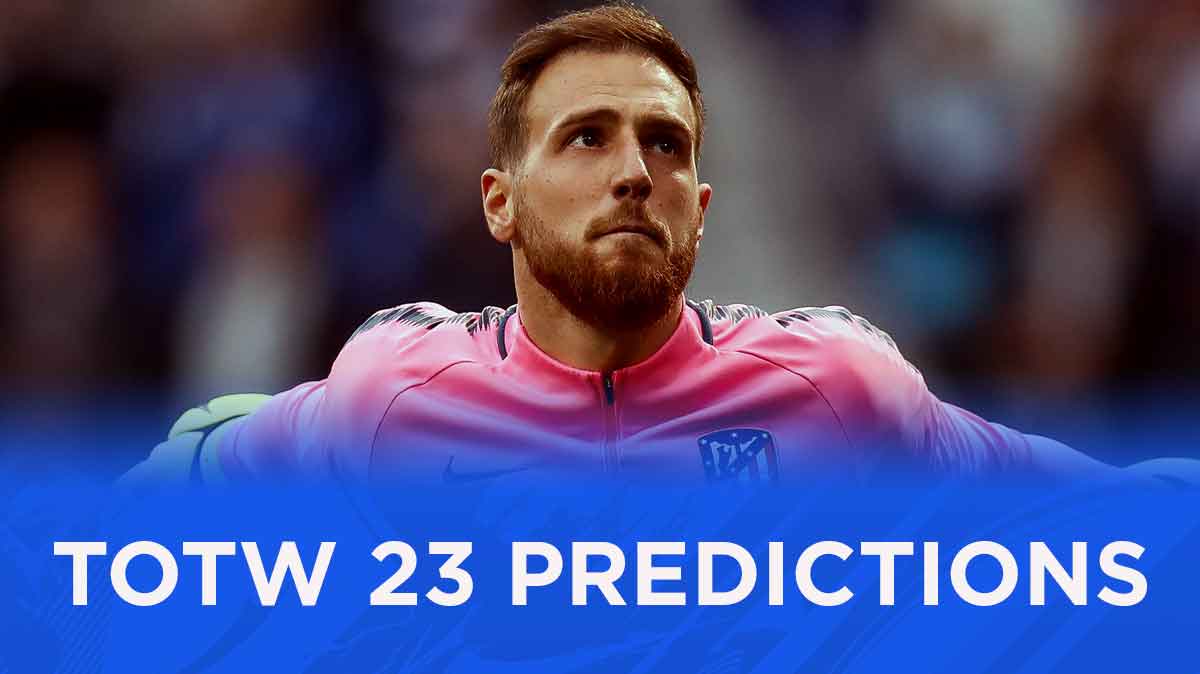 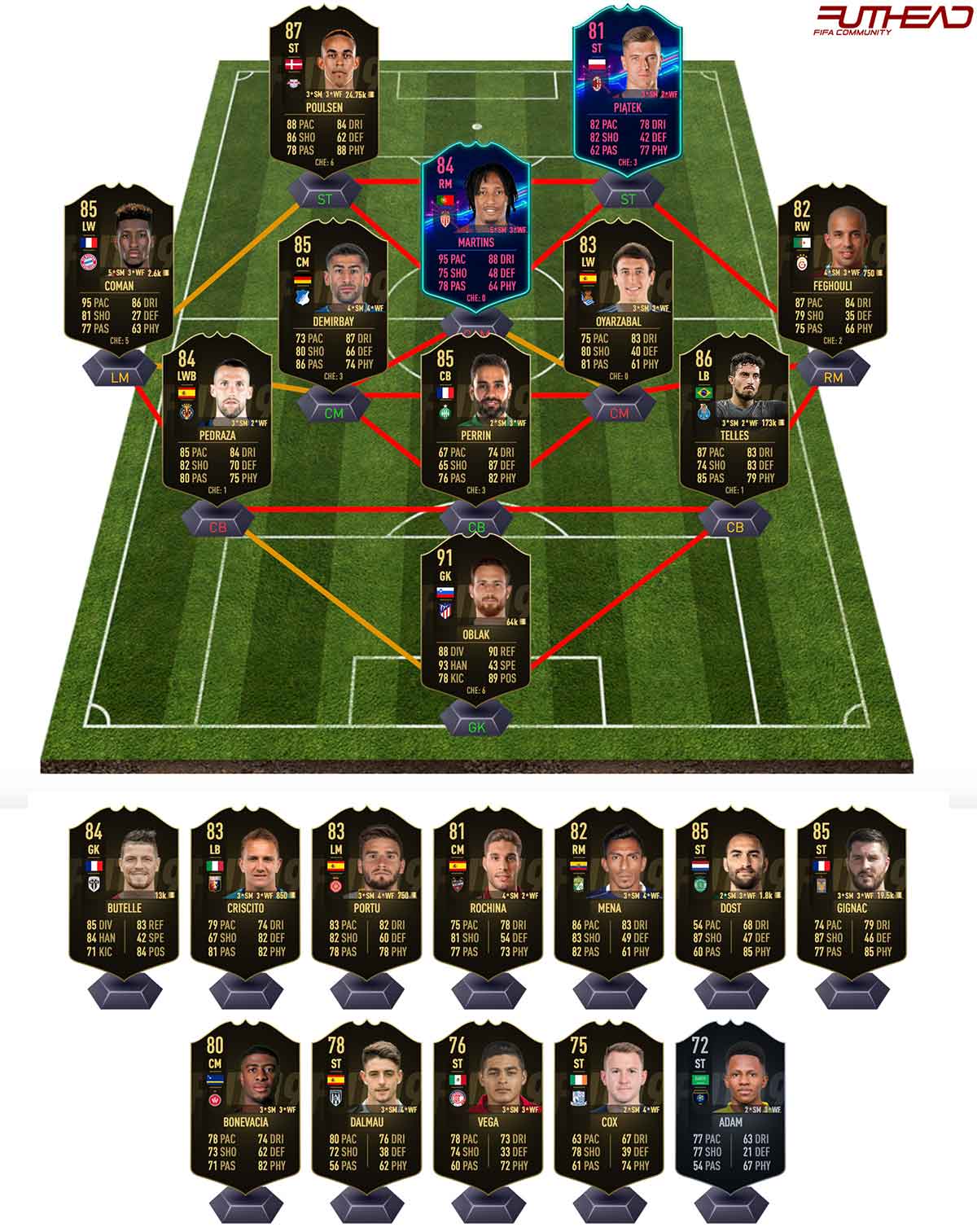 Jan Oblak - GK - OVR 90 When Atletico traveled to Vallecano they wouldn't have expected to rely on their keeper for the points but in the end that's what happened. The Slovenian stopper was crucial in their 1-0 win, with Griezmann scoring the winner late on. Had it not have been for Oblak the story would have been completely different though. Six saves in total is what he can boast ensuring the three points went the way of the favorites.

Pedraza - LWB - OVR 76 Going from the Europa League MOTM item Pedraza received, he will go down as a LWB, which if that's the case I expect an IF to be coming his way. Villarreal recorded and comfortable 3-0 win when hosting Sevilla this weekend, a result which looks brilliant on paper. Pedraza scored one of those three goals and went on to be awarded MOTM with a perfect three-star rating from MARCA.

Loic Perrin - CB - OVR 80 Although Perrin comes from a midweek fixture I am willing to take the punt on him as if EA look into the match I am certain that they will give him the nod. L'Equipe awarded him a 7/10 for his goal in Etienne's 2-1 win over Strasbourg. With limited options from the division from the weekend set of fixtures, this one could easily entice EA.

Alex Telles - LB - OVR 84 Although Telles has dynamic items he is still yet to pick up an actual IF, which is unusual for him with several attacking contributions in a strong Porto side. It is a bit of a punt but with Telles picking up MOTM for his assist in Porto's 2-0 win over Vitoria, alongside the fact he is still to pick up an IF I can see him edging his way into the side.

Kingsley Coman - LW - OVR 83 I expect the Bundesliga to have the most players featured in this weeks side and one of the better players from that selection is Coman, who was unquestionably the best player this week. Scoring twice and assisting another for Munich is their tightly contested 3-2 away win over Augsburg. A game which saw them fall behind twice before eventually managing all three points.

Kerem Demirbay - CM - OVR 82 Fut players that completed the weekly objective for Demitbay's headliner item will be happy this week with the German looking likely for another IF. That is after he was outstanding in the middle of the park, recording both a goal and assist during Hoffenheim's 3-0 home win over Hannover.

Oyarzabal - LW - OVR 80 The young Spanish winger has had some hype surrounding him for a while now but has never really reached the heights many have expected. He keeps his spot for Sociedad though and regularly contributes offensively. The only actual IF he has picked up came way back in FIFA 16, while he was still a bronze item. With two goals to his name this weekend though he looks set to pick up another.

Gelson Martins - RM - OVR 82 Since making the move to Monaco Martins has excelled, playing well week in week out helping to produce results for Monaco, I almost took the punt on him last week but I'm glad I didn't. With the lack of fixtures, it gives the chance for solitary goals though and with Ligue 1 offering very little alongside the fact Martins has an OTW item I feel that his one goal in Monaco's 1-0 win could be enough.

Sofiane Feghouli - RW - OVR 79 It's been a while since I have heard the name Feghouli which after a strong campaign in Valencia before then moving to West Ham is a fair decline on his career. Either way, the Algerian is set to feature in TOTW 23 after scoring three times for Galatasaray in their 4-1 away win over Kasimpasa.

Yussuf Poulsen - ST - OVR 79 After a winter upgrade went his way Poulsen's SIF was increased to 86 rated, meaning if he gets his third IF on Wednesday he will become 87 rated, which for someone starting the season at the modest rating of 77 is huge. This week he gets the nod for scoring twice in a 3-1 away win for RB Leipzig.

Krzysztof Piatek - ST - OVR 78 It looks as though Piatek will be the first winter OTW to pick up a boost and that won't surprise many with the youngster scoring multiple goals for Genoa before his move to AC Milan. He added another two-goal to his already impressive tally during Milan's 3-1 away win over Atalanta, picking up an 8/10 in the process.

Ludovic Butelle - GK - OVR 75 As is often the case when Ligue 1 offers next to no options the safest bet is to go with the keeper. Once again I am following that logic as it often pays off. Butelle made a modest 4 saves in Angers 3-0 win but with a 7/10 and a spot in L'Equipe's TOTW it is enough for me.

Domenico Criscito - LB - OVR 81 With no Premier league in action, it leaves a fair few spots open with it being the division with the most IFs regularly. It leaves places for the other top divisions usually and I expect the same to happen again. Criscito is a fringe player who could easily have missed out with all leagues in action but with a MOTM award going alongside his goal in Genoa's 2-1 win he becomes a strong candidate for the side.

Portu - LM - OVR 80 With Madrid taking a lead early on it looked as though they would run away with the match while hosting Girona, but the visitors had other ideas. Not only did they pull the game back level but thanks to a 75th minute Portu goal they walked away with a shock win. When Madrid lose it usually results in an IF and although Portu is forced into the side I expect it to happen.

Angel Mena - RM - OVR 72 Angel Mena makes it back to back predictions with the Mexican being snubbed last week surely fate won't repeat itself. Once again he scored twice and assisted another from RM, making it four goals and two assists from his last two matches. This time coming in a 3-0 home win over Toluca, lifting Leon into 3rd place.

Rochina - CM - OVR 75 Celta Vigo have been a decent side in recent years so when Levante traveled to them and walked away with a 4-1 win it shocked many. Rochina looks to be the favorite for the IF after his two assists helped towards the early lead.

Bas Dost - ST - OVR 83 This was a hard call to make with many going for the in-form Bruno Fernandes but after his snub last week for a better performance alongside the fact the midfield has the most options this week I am happy to snub him in order to give teammate, Bas Dost his first IF of the year. The Dutchman scored twice in Sporting's 3-0 win over Braga and although one was from the spot with not many gold strikers performing he stands out.

Andre-Pierre Gignac - ST - OVR 80 The only thing putting me off selecting Gignac is the fact he has a POTY item and I can't see EA wanting to exceed that rating. Although this specific IF won't they could potentially wait and see if he scores a hat trick later on in the year. That being said I couldn't justify his snub in the end after his two goals helped Tigres to a narrow 3-2 win.

Roly Bonevacia - CAM - OVR 70 It was a good result for WSW who recorded a 3-1 away win over Adelaide United with Bonevacia putting in a simply superb performance for the away side. He was involved in all three of their goals, scoring once himself alongside assisting the other two. Sofascore awarded him a perfect 10 match rating which is something that doesn't often get overlooked.

Dalmau - ST - OVR 68 It looks as though Heracles are going to make it back to back IF's after they backed up their shock 1-0 win over Ajax with a convincing 6-0 win over Sittard. A few players do deserve a mention but realisticall theres only one option here in Dalmau. The Spaniard scored an impressive four times and rightfully claimed player of the week for doing just that.

Alexis Vega - ST - OVR 66 Three Mexican league players could be classed as pushing it and to an extent I agree but with places opened up due to the lack of Premier League football, if all three deserve their spot why shouldn't I include them? Vega is arguably the safest of the three with the striker scoring a hat trick in a 3-0 home win.

Simon Cox - ST - OVR 65 Although the FA cup was in full swing this weekend a lot of lower divisions in England had fixtures due to both sides already being eliminated from the competition. I expect to see a couple of ELL players feature with Cox being one of them. The Irish striker scored all three Southend goals and although they could only draw (3-3) his contribution was the sole reason for that.

Abdulfatah Adam - ST - OVR 62 It's been a few weeks since I last predicted a bronze item to get the nod and that has largely been down to lack of hat tricks in which case the silvers are seemingly preffered. Over in the Saudi league Al-Taawoun recorded a comfortable 4-0 win with Adam scoring three though and thus we should be seeing a silver IF on Wednesday.