FIFA 19 Team of the Week 11 Predictions

Published on by Aarong222 143 Comments Updated on 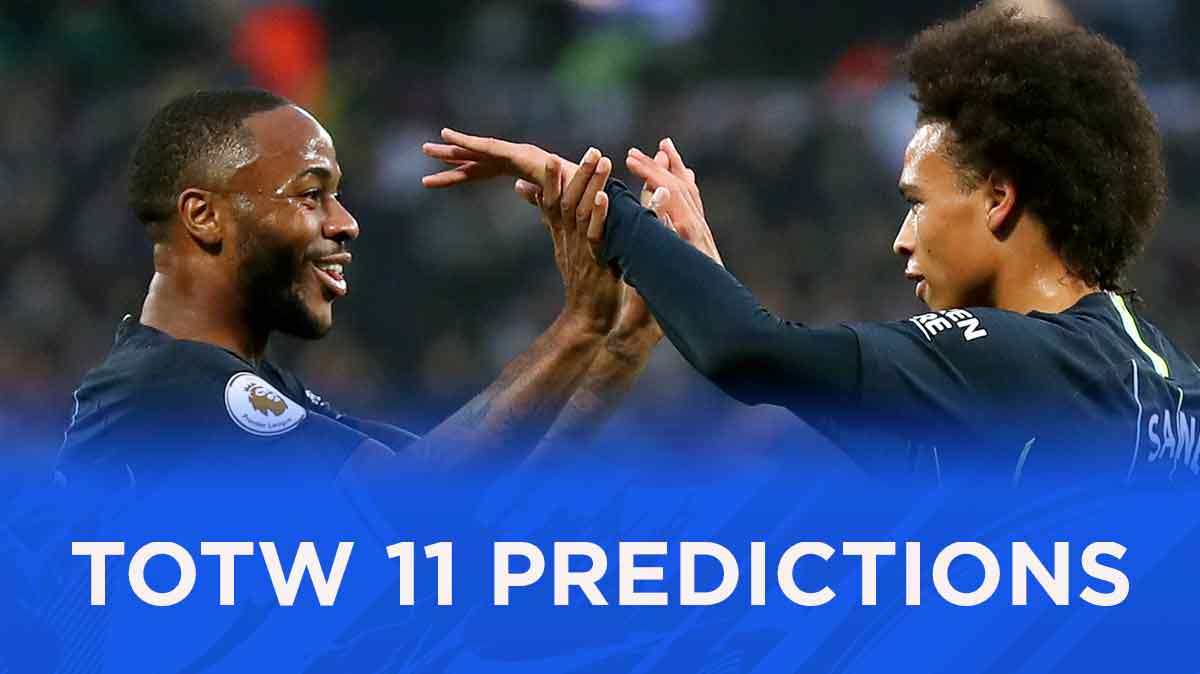 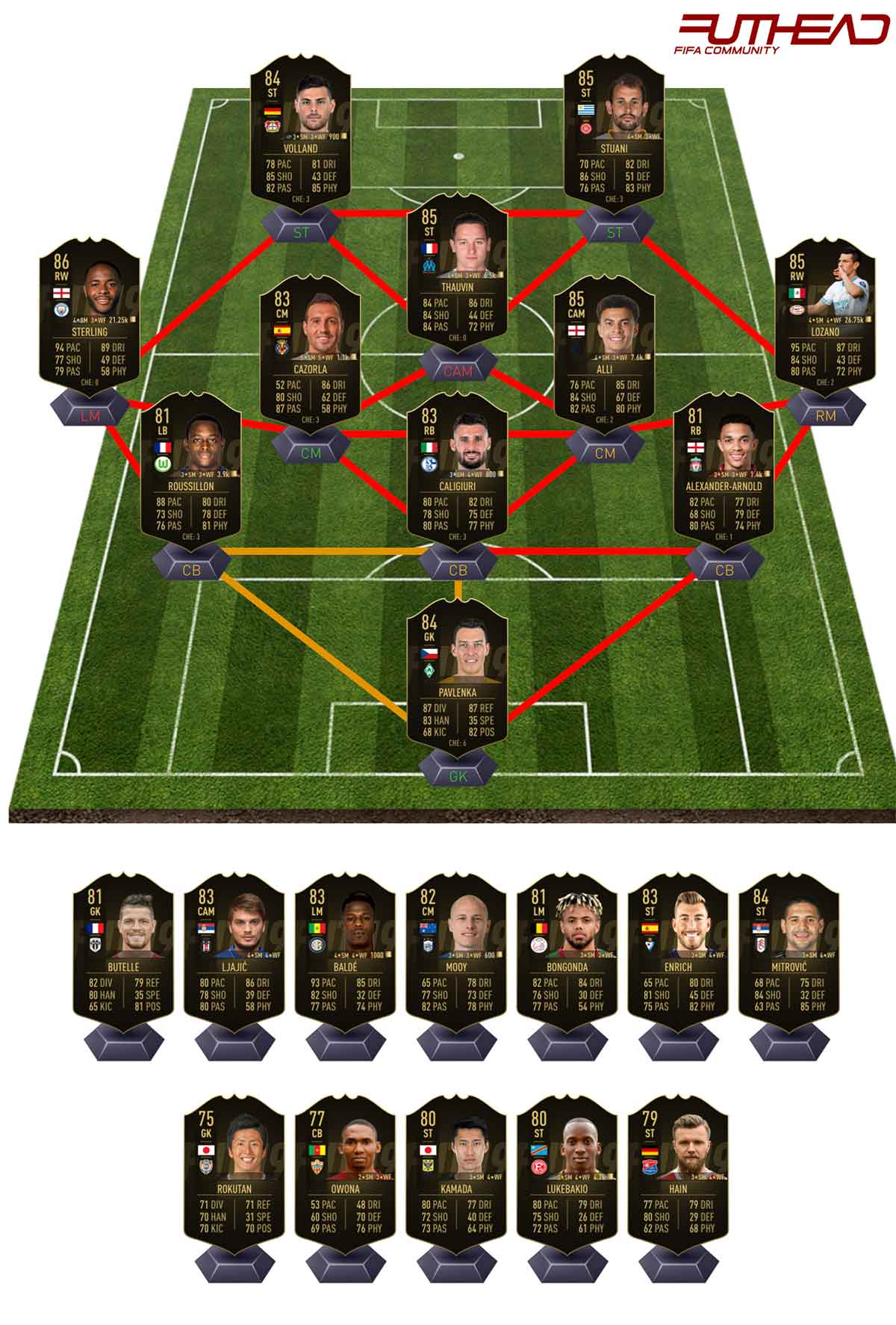 Jiri Pavlenka - GK - OVR 81 The amount of times I have selected a player for TOTW for a second consecutive week after originally getting it wrong is worrying. Pavlenka is another to add to the list after he made 8 saves in a 1-1 draw. Personally, I still think he should have made it last week but after a 1.5 from Kicker I fully expect him this time around.

Trent Alexandre Arnold - RB - OVR 78 I predicted his IF last week for the internationals and he was snubbed but I can't see the same happening two weeks in a row. The RB found himself on the scoresheet once again, this time domestically for Liverpool in their 3-0 win with 10 men. TAA went on to claim MOTM which will be enough for his IF.

Daniel Caligiuri - RB - OVR 80 This one's a bit of a punt with Caligiuri recently featuring as a player pick item for the Bundesliga SBC but after he was heavily involved in three Schalke goals I don't think that he can be ignored. Two directly went down as assists but you can argue that he got three.

Jerome Roussillion - LB - OVR 78 It's not often that I would be happy with an 81 rated player pick come Thursday but I really would take Roussillion. The Wolfsburg LB is in line for his IF after scoring the solitary goal in Wolfsburg's 1-0 win over Leipzig. He was awarded a 2 from kicker which is an average rating but with him picking up MOTM as well it should be enough.

Raheem Sterling - RW - OVR 85 Sterling has been one of the most snubbed players this year so far and could easily be snubbed once again but with Sane being in the current TOTW it makes him unavailable for this side and thus leaving Sterling's goal and assist the attractive option from City's 4-0 win over West Ham.

Santi Cazorla - CM - OVR 80 Cazorla's injury troubles have seen him decrease by a huge six ratings over the past two years but now that he is back playing football regularly its clear to see that his ability is still there. He picked up both assists for Villarreal in their 2-1 win over Real Betis claiming three stars from Marca for doing so.

Hirving Lozano - RW - OVR 80 Last years super sub looks set to become this years as well with his SIF just around the corner now after the Mexican scored twice and assisted another in PSV's 3-0 win over Heerenveen. Lot's of good performances occurred in the Dutch division this week but Lozano stands out for multiple reasons.

Dele Alli - CAM - OVR 84 Chelsea's unbeaten start to the season was finally ended with Spurs managing a 3-1 win and in doing so cementing themselves as serious title contenders. I am positive that they will get an IF from the match between Erisen who assisted twice and Alli who grabbed both a goal and assist. I have gone for the latter but it's really just guesswork.

Kevin Volland - ST - OVR 81 Volland has been on the brink of a TOTW selection time and time again this year but after a weak week he could finally sneak in. The Leverkusen striker scored both their goals in a 2-0 win over Stuttgart which was enough to see him into TOTW.

Florian Thauvin - ST - OVR 84 There is a little debate over the actual position of Thauvin and I believe it comes down to personal perspective. I think that EA makes him a striker due to L'Equipe listing him there but Regardless of that Thauvin will feature on Wednesday after he scored a hat trick for Marseille during a 3-1 away win over Amiens.

Cristhian Stuani - ST - OVR 80 Multiple La Liga strikers scored twice this week and we have to limit it somewhere but with a lack of options, I do expect a couple to sneak in. One of those being Stuani, who will be picking up his second of the year after scoring twice in Girona's 3-1 win.

Ludovic Butelle - GK - OVR 75 Butelle's chances could easily have gone after he conceded in the 88th minute to lose his clean sheet, however, L'equipe still acknowledged how important he was the score and awarded him an 8/10 which when it comes to keepers almost always results in an inclusion. In total, he made seven saves which is why he was awarded an 8.

Adem Ljajic - CAM - OVR 80 This spot will, of course, go to a defender but I seriously struggled to find gold options and thus instead I have opted for another midfielder in order to increase my overall correct score. Ljajic was one of the best options from Turkey this week after scoring once and assisting another in Besiktas's 4-1 win.

Aaron Mooy - CM - OVR 79 With just the one win to their name, Huddersfield was in desperate need of some points. A Mooy brace helped them double the winning tally with a 2-0 win over Wolves of whom after a strong start has begun to struggle, without a win in five now.

Keita Balde - LM - OVR 80 One of the best performances in Serie A came in Inter's 3-0 win over Frosinone with Balde being the star performer, scoring twice and assisting another. Gazzetta only awarded him a 7.5 which is harsh but alongside a MOTM award it will be more than enough to see him included come Wednesday.

Theo Bongonda - RM - OVR 75 The first of two Belgian league players, both of whom come from surprise victories. Bongonda's Waregem managed a 3-1 win over Club Brugge with two of those goals coming from the Belgian winger.

Sergi Enrich - ST - OVR 80 Real Madrid made it four losses from six with a simply embarrassing 3-0 loss to Eibar, leaving them down in 6th after 13 games. Not something the world is used to seeing. Eibar, on the other hand, will be thrilled with the result and I do expect an IF from the match. The candidate is not an obvious choice but under the circumstances Enrich's goal and assist is enough for me.

Aleksandar Mitrovic - ST - OVR 76 I think its safe to say that Mitrovic has impressed everyone this season with the Serbian coming from nowhere in truth. Under new management in Ranieri he is still performing with his two goals helping Fulham to a 3-2 win over Southampton.

Yuji Rokutan - GK - OVR 65 In what was simply just a bizarre match Rokutan scored an equaliser in the 11114th minute to make the scores level at 3-3 before a player was then sent off in the 118th minute, resulting in an astonishing 19 minutes of extra time. Regardless of the abnormal match times, the fact is that Rokutan has a goal to his name which means he is likely going to be awarded an IF.

Lucien Owona - CB - OVR 67 We have seen more and more silver defenders get the nod over the past few weeks and with a lack of strikers performing it leaves the door open once again. Owona looks a good bet after he notched both his side's goals in a 2-2 draw and picked up MOTM for doing so.

Daichi Kamada - ST - OVR 70 It is often the case that silver and bronze strikers need to score three in order to be recognised but exceptions can be made. In this case its due to the win coming against Anderlecht. Kamada was exceptional in the match, scoring twice and assisting another.

Dodi Lukebakio - ST - OVR 70 With Munich taking an early two-goal lead it looked as though it was going to be a routine win for them but once again they ended up with a disappointing result with Dusseldorf coming back to draw 3-3. Lukebakio scored all three of those goals with the third coming in the 93rd minute.

Stephen Hain - ST - OVR 69 When you see a nine-goal thriller occur you know its always likely that an IF will be appearing from the match and that was the case in Unterhaching's 5-4 win over Jena with striker, Hain scoring three of their five goals.