FIFA 19 Team of the Week 10 Predictions

Published on by Aarong222 180 Comments 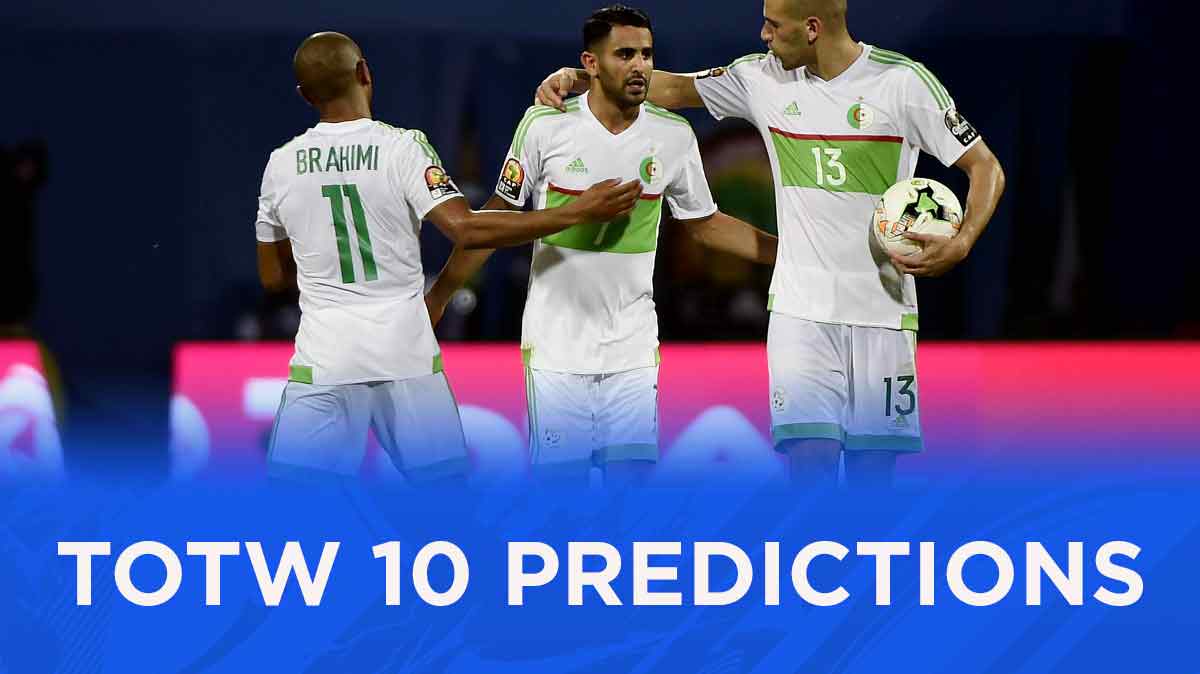 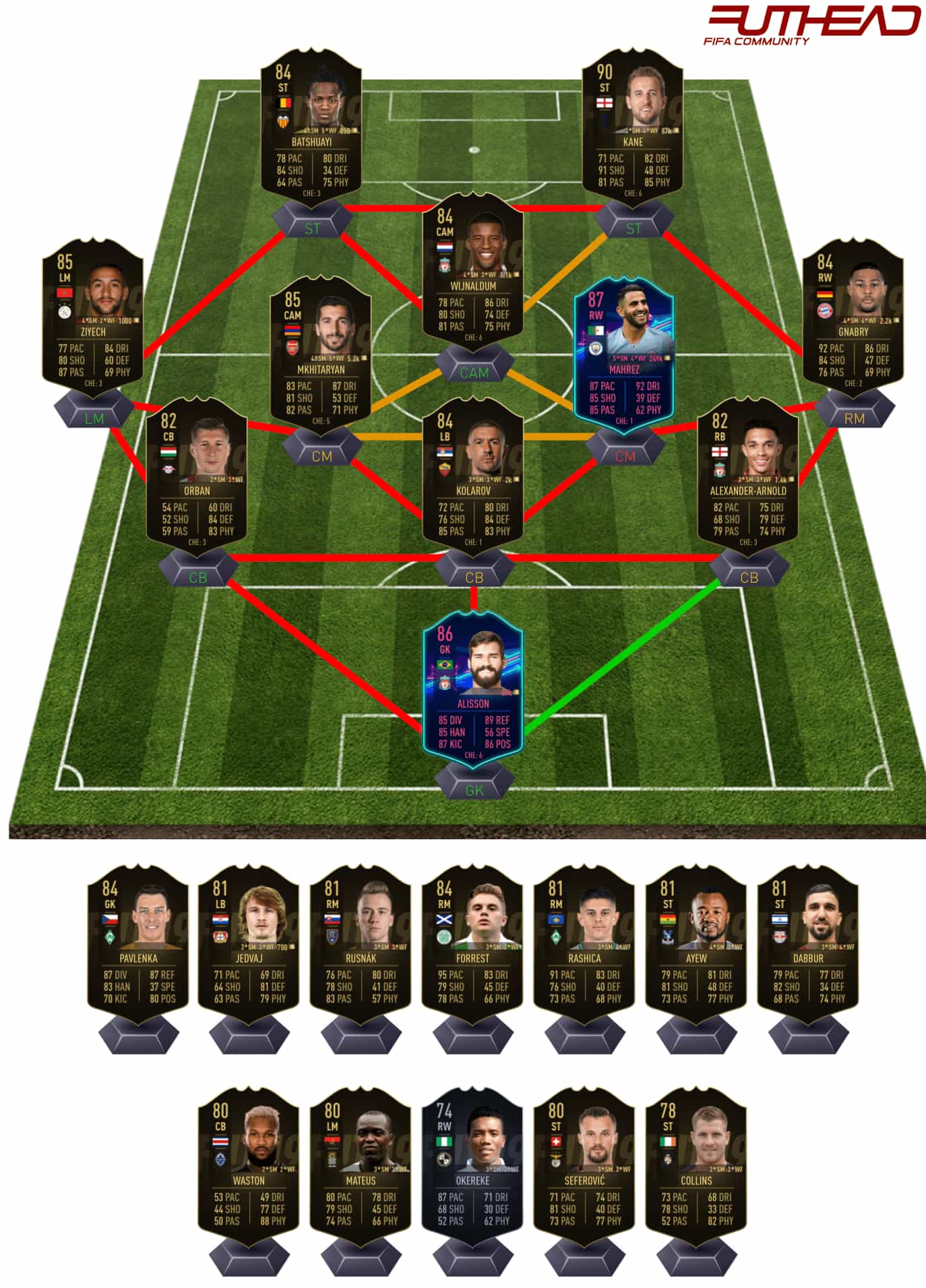 Alisson - GK - OVR 85 Now before you go mad on this OTW item it is a punt. International weeks are always difficult when it comes to predicting keepers and this one was no different. With Black Friday incoming, I expect big names to appear and with not many performing Alisson could attract EA. He made a total of four saves to keep his clean sheet in Brazil's win.

Will Orban - CB - OVR 76 We saw one nationality change with Firpo last week and we look set to see another with Orban in TOTW 10. Now playing his international football for Hungary. Orban scored one of their two goals in a 2-0 home win over Estonia, picking up MOTM in the process.

Aleksandar Kolarov - LB - OVR 82 There were a couple of friendlies which had options I could have included in this spot but in the end, I went for the "competitive" fixture in Serbia v Montenegro. Kolarov picked up MOTM for his assist in a 2-1 win for the Serbians.

Trent Alexander-Arnold - RB - OVR 78 We saw one Liverpool wingback receive an IF last week with Robertson being awarded one for his assist and we now look set to have the other side sorted as well after TAA scored one of England's three goals in their 3-0 win over USA.

Hakim Ziyech - LM - OVR 82 Over to the AFCON games now which are usually the hardest to predict but this one looks relatively straightforward. Ziyech scored both Moroccan goals in their 2-0 home win over Cameroon, which is a huge win for them. One of the goals was from the spot but while playing in a LM role that will still be enough for him.

Henrikh Mkhitaryan - CAM - OVR 84 With Movsisiyan not being in the game it leaves the door open for another Armenian IF to occur. The only realistic one left is Mkhitaryan who is also risky due to his recent SBC item. I don't think that should harm his IF chances though and thus I will predict him for his two assists.

Georginio Wijnaldum - CAM - OVR 82 The third Liverpool selection of the week comes with Netherlands Wijnaldum. The Dutch have been performing superbly as a nation recently and they continued that form with a 2-0 win over France. Wijnaldum and Depay were the goal scorers but with Depay recently picking up an IF it leaves the door open for Wijnaldum

Riyad Mahrez - RM - OVR 85 Although Mahrez picked up his first IF in TOTW 6 a four-week gap now that SIF's have become a norm is long enough for me, especially when this side lacks big names. Mahrez scored twice and assisted another for Algeria as they won away at Togo, 4-1.

Serge Gnabry - RW - OVR 82 This IF could go one of two ways, firstly with Sule who scored once and kept a clean sheet, but I have decided to snub him in place of Gnabry who scored once and assisted another in Germany's 3-0 home win over Russia. The winger was awarded kickers MOTM and we have seen that player on multiple occasions be awarded the IF.

Michy Batshuayi - ST - OVR 81 Batshuayi was one of the first names onto this prediction after his brace on Thursday evening saw Belgium pick up a 2-0 win at home to Iceland in their UEFA nations group match. Once again, it’s a case of Michy being superb while playing matches but simply being muscled out by other players when it comes to big games.

Harry Kane - ST - OVR 89 Although it looks as though IF's have been limited to one a side this season with sides playing two games over the week it could easily be a case of having one per match. Kane comes from the second after scoring one and assisting the other in England’s 2-1 win over Croatia.

Jiri Pavlenka- GK - OVR 82 Another international keeper and another punt. I am working purely on number of saves here and Pavlenka's six alongside a clean sheet stood out for me. Czech Republic ended up winning the match 1-0 after travelling over to Poland.

Tin Jedvaj - LB - OVR 76 A horrific position change when it comes to FIFA, but it looks set to be one that is going to happen after Jedvaj was instrumental in Croatia's impressive 3-2 win over Spain. The Leverkusen defender scored two of their three goals with the second coming in the form of a 92nd minute winner.

Albert Rusnak - RM - OVR 75 During international weeks Ukraine are often a side which get favoured heavily with several random IF's coming from them in the past. With a 4-1 loss to their name this week it's their opponents which look set for the IF though. Rusnak is the clear option after grabbing himself a goal and two assists.

James Forrest - RM - OVR 76 Although not as impressive as his first IF of which he managed to score four goals for Celtic. I can see Forrest picking up his SIF on Wednesday. Playing international football for Scotland this time the winger scored twice as Scotland went on to beat Armenia 4-0.

Milot Rashica - RM - OVR 76 Yet another RM and it’s also another Kosovo IF from an international week. Kosovo are showing that they need to be taken seriously, as far as smaller nations go anyway. This time recording a 5-0 away win over Malta. LB, Kololli who was their previous IF scored again but I have opted for Rashica who scored once and assisted another two.

Munas Dabbur - ST - OVR 76 With Israel winning 7-0 I was expecting an easy IF selection, but it was anything but that with goals and assists being spread everywhere. In the end due to lack of striker I had to go with Dabbur who scored two of those seven goals.

Jordan Ayew - ST - OVR 77 Although one of his goals came in the form of a penalty, I can see two goals being enough for the Palace striker to get the nod this week. Scoring both of Ghana's goals to help them towards a 2-0 win over Ethiopia.

Kendall Waston - CB - OVR 74 Costa Rica are an interesting side with players which suggest they would really struggle but for some reason it just works, and they get results. Another impressive one came this weekend with them winning 3-2 away at Chile. All three goals came from defenders with Waston being the obvious choice after scoring two of those three.

Mateus - LM - OVR 71 It's not often that you will see an Angolan player predicted for TOTW during an international break, but it looks as though it could be on the way after they shocked Burkina Faso, winning 2-1 at home. Mateus scored both of those goals from LM and therefore enters the side.

David Okereke - RW - OVR 64 Usually we see one bronze player feature each week in the side and this weeks I believe Okereke will be that player. He scored twice and assisted another in Spezia's 3-1 home win.

Haris Seferovic - ST - OVR 73 Switzerland recorded a shock 5-2 win while hosting Belgium, a result which not many would have expected. Seferovic is the best option from the match despite only being a silver item after he scored three of those five goals.

James Collins - ST - OVR 68 The English lower leagues were always going to get some recognition this week and they could easily get more than I have given but one player I couldn't ignore was Collins. Luton often pick up big wins and their latest came via a 5-1 win over Plymouth of which Collins scored three.