FIFA 19 Team of the Week 6 Predictions

Published on by Aarong222 249 Comments 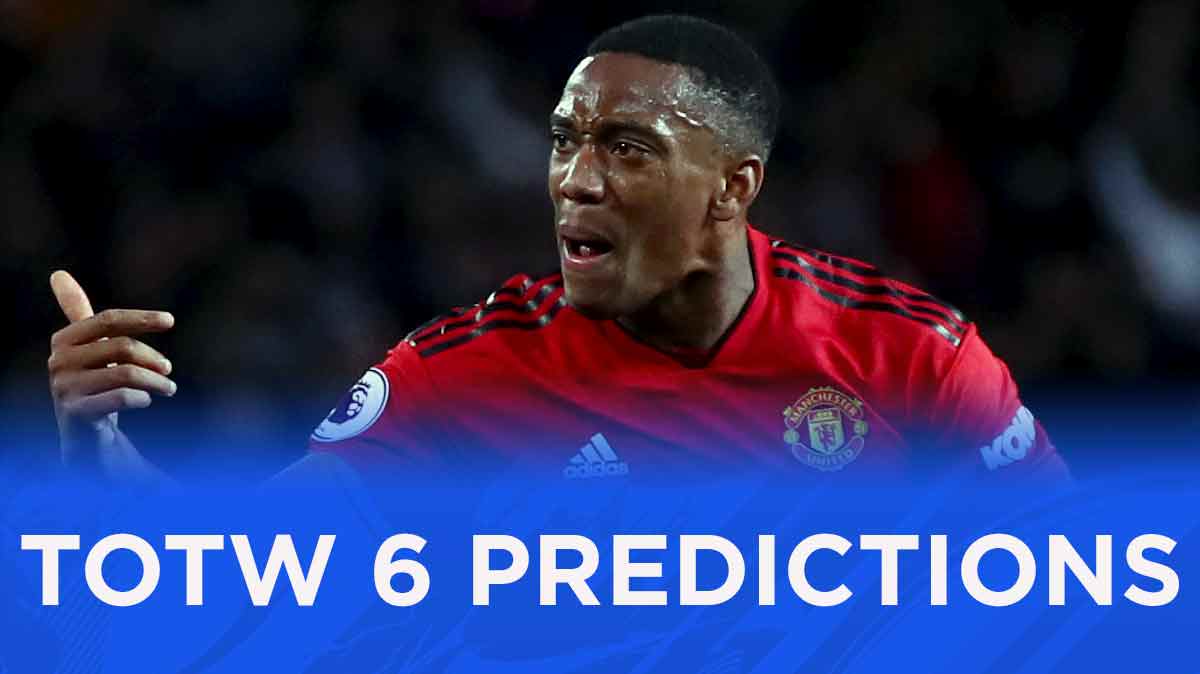 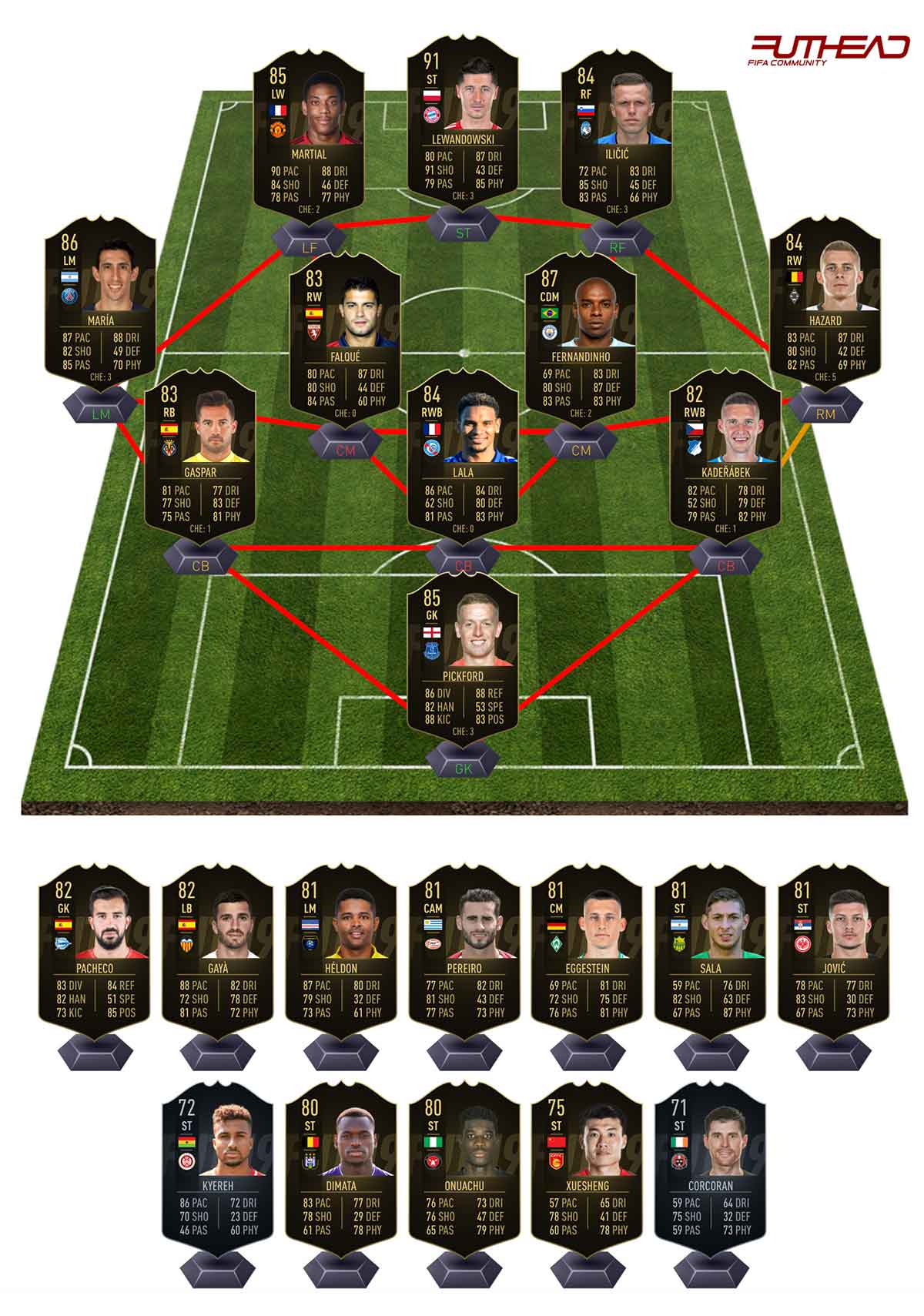 Jordan Pickford - GK - OVR 83 We start the week with an easy selection in Pickford. The Everton stopper saved a Palace penalty alongside four other saves to keep his clean sheet with two late goals from Calvert-Lewin and Tosun then securing all three points for the Toffees.

Mario Gaspar - RB - OVR 80 One of two La Liga defensive punts I have gone for is Gaspar, he defender scored Villarreal's only goal of the game as they managed to hold Atletico Madrid to a 1-1 draw. Luis scored for Atletico but with only a 1-star rating for the Brazilian, I believe that is unlikely.

Kenny Lala - RWB - OVR 76 Although this selection contradicts one I later make I just couldn't ignore Lala with the limited defensive options on offer, so Lala could well become the first player to pick up a SIF in FIFA 19. The defender picked up an assist and a huge 8 match rating in Strasbourg’s shock 2-1 win over Monaco.

Pavel Kaderabek - RWB - OVR 79 This one has several factors to it with Kaderabek not actually claiming MOTM. The man who did was young English winger, Nelson but with him being a silver I can't see that happening. Instead we go with a defender, a position which we lack options from. Kaderabek picked up the same match rating as Nelson for his two assists in a 3-1 win.

Anthony Martial - LM - OVR 83 Although United failed to see out the match with Ross Barkley scoring in the final moments of the match, Martial's brace should still be enough to claim the in-form. Had Manchester United held out the match to end Chelsea's unbeaten run the Frenchman would have been a certainty however I still don't think he’s far off exactly that.

Thorgan Hazard - RW - OVR 81 Bizarrely Hofmann scored a hat trick in this match but due to proximity of his previous IF he becomes unable to pick up another IF. Instead we opt for a team mate in Hazard. The Belgian scored one and assisted another two as Gladbach recorded a 4-0 home win over Mainz

Fernandinho - CM - OVR 86 Once again Manchester City ran away with the match with it being a usually defensively stable Burnley being on the wrong end of it this time around. City managed to score five without reply and in the process offered multiple IF options. Mahrez is genuinely an option after picking up MOTM from multiple sources but instead I am opting for Fernandinho who scored once and assisted another.

Angel Di Maria - LM - OVR 84 PSG ran away as 5-0 winners with multiple different players finding themselves in the goals, ADM was not one of them however with two assists he did find himself picking up MOTM. With an 8/10 being awarded from L'equipe I can't see the Argentine being ignored.

Iago Falque - RW - OVR 80 We have seen a few IFs appear from losses this year already so the fact that Torino drew their match shouldn't be too much of a factor in Iago's selection. The Spaniard picked up both a goal and assist in the 2-2 draw and picked up a 7.5 for doing so, making him the joint second highest rating of the week.

Robert Lewandowski - ST - OVR 90 One of the bigger names this week comes from Munich's 3-1 away win over Wolfsburg. Lewandowski was directly involved in all three of those goals, scoring twice himself before assisting Rodriguez late on.

Josip Ilicic - RF - OVR 81 With Chievo going down to 10 men at the end of the second half Atalanta took the chance to show what they are made of, running away with the match with the eventual score being 5-1 to the away side. Ilicic scored three of those five goals which was enough for him to claim player of the week in Italy.

Pacheco - GK - OVR 79 There were multiple goalkeeping options from La Liga this week with the best probably being Oier but due to his recent IF he becomes unavailable and thus we go with another option in Pacheco. Aalves have been one of the surprise packages this season with them battling it out at the top of the table currently. Pacheco was once again crucial to them, making a total of nine saves to keep a clean sheet.

Gaya - LB - OVR 79 I mentioned that there was another Spanish league defensive punt and it would be a great option for those sides in Gaya. Similarly, to that of Gaspar the defender scored once in a 1-1 draw. This time for Valencia but against a weaker opposition in Leganes. With the lack of both La Liga and defensive options it’s a punt that could well happen.

Heldon - LM - OVR 76 We have seen some interesting choices from the Saudi division the past couple of weeks but Heldon will not be one of them. The Cape Verde international was involved in all four of Taawon's goals, with both two goals and two assists to his name

Gaston Pereiro - CAM - OVR 77 Many will be asking for a SIF Lozano after he scored picked up POTW for his goal and two assists, but I still feel that it's slightly too soon for SIFs to start appearing and thus I have opted for Pereiro, who scored twice in the same match with PSV winning 6-0.

Maximilian Eggestein - CM - OVR 77 Yet another player of the Bundesliga in contention for the side is Eggestein, the Werder Bremen midfielder scored both their goals in a 2-0 away win over Schalke, picking up a match rating of 1.5 for doing so.

Emiliano Sala - ST - OVR 77 The subs bench seemingly picked itself for the most part this week with Sala being another of those. The Argentine striker scored a hat trick as Nantes recorded an impressive 4-0 win over Toulouse.

Luka Jovic - ST - OVR 75 When it comes to thumping’s Frankfurt are not a side you would associate them with but after coming away with a 7-1 win over Dusseldorf, it's exactly what happened on Friday evening. Jovic managed to score five of those goals and although there are other options from the match he is the clear one.

Daniel-Kofi Kyereh - ST - OVR 62 I am unsure if EA will actually opt for five reserve STs or two bronze either but with so many hat tricks being scored I feel like it's in my interest to predict them all rather than guessing on who will miss out. Kyereh was POTW in the third tier of Germany after scoring three goals in Wehen's 5-2 away win.

Landry Dimata - ST - OVR 72 Although one of Dimata's goals came from the spot I feel as though the fact he plays for Anderlecht will strongly work in his favour. The Belgian scored three times in Anderlecht's 4-2 home win with the striker becoming one of Belgium’s latest talents.

Paul Ebere Onuachu - ST - OVR 70 For the first time in a while we were blessed with multiple hat tricks for the reserve option, potentially too many with hat tricks almost certain to miss out. As far as predicting goes though they are difficult to ignore and thus after Onuachu scored three in his sides 4-1 win he makes my side.

Dong Xuesheng- ST - OVR 65 So far when we have seen CSL players mentioned it has been big names, usually with a nostalgic feel to them as well. This time however we do have a low rated Chinese player. There were several options from the match with it ending 4-4 but with Dong scoring a hat trick he has to be the favourite.

Dinny Corcoran - ST - OVR 61 Corcoran may not be the best of IFs when it comes to FIFA but after he scored a total of four goals in a Bohemians 5-0 win he is one of the clear-cut options for this week.