FIFA 19 Team of the Week 2 Predictions

Published on by Aarong222 130 Comments 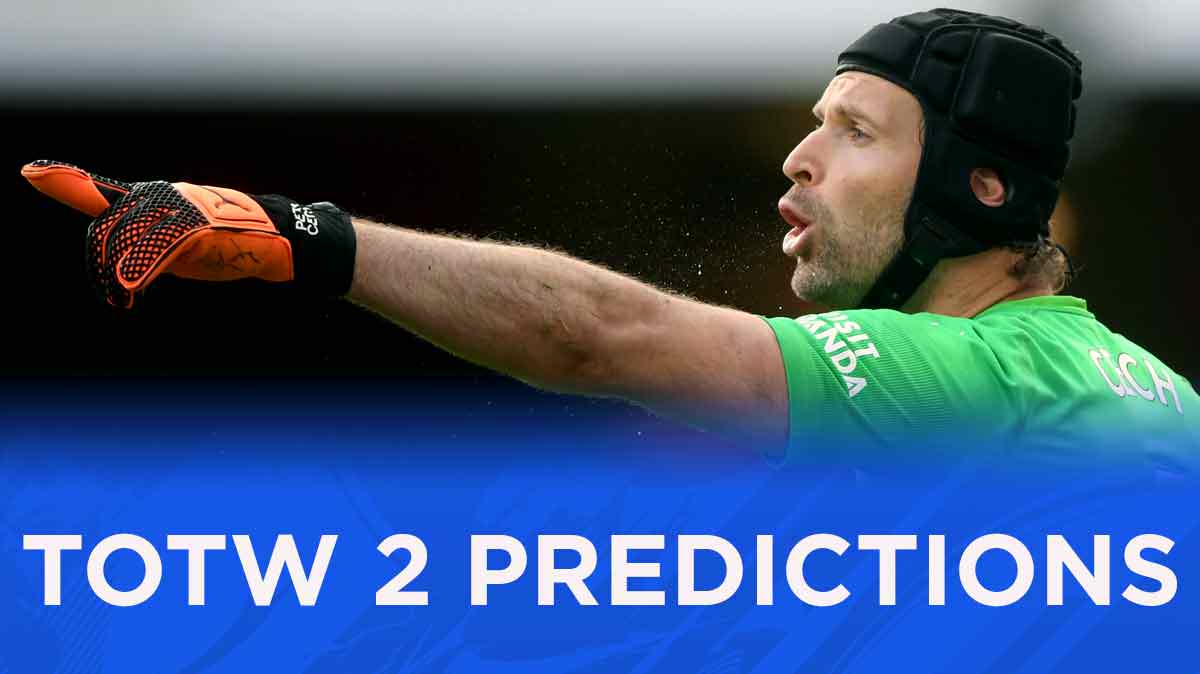 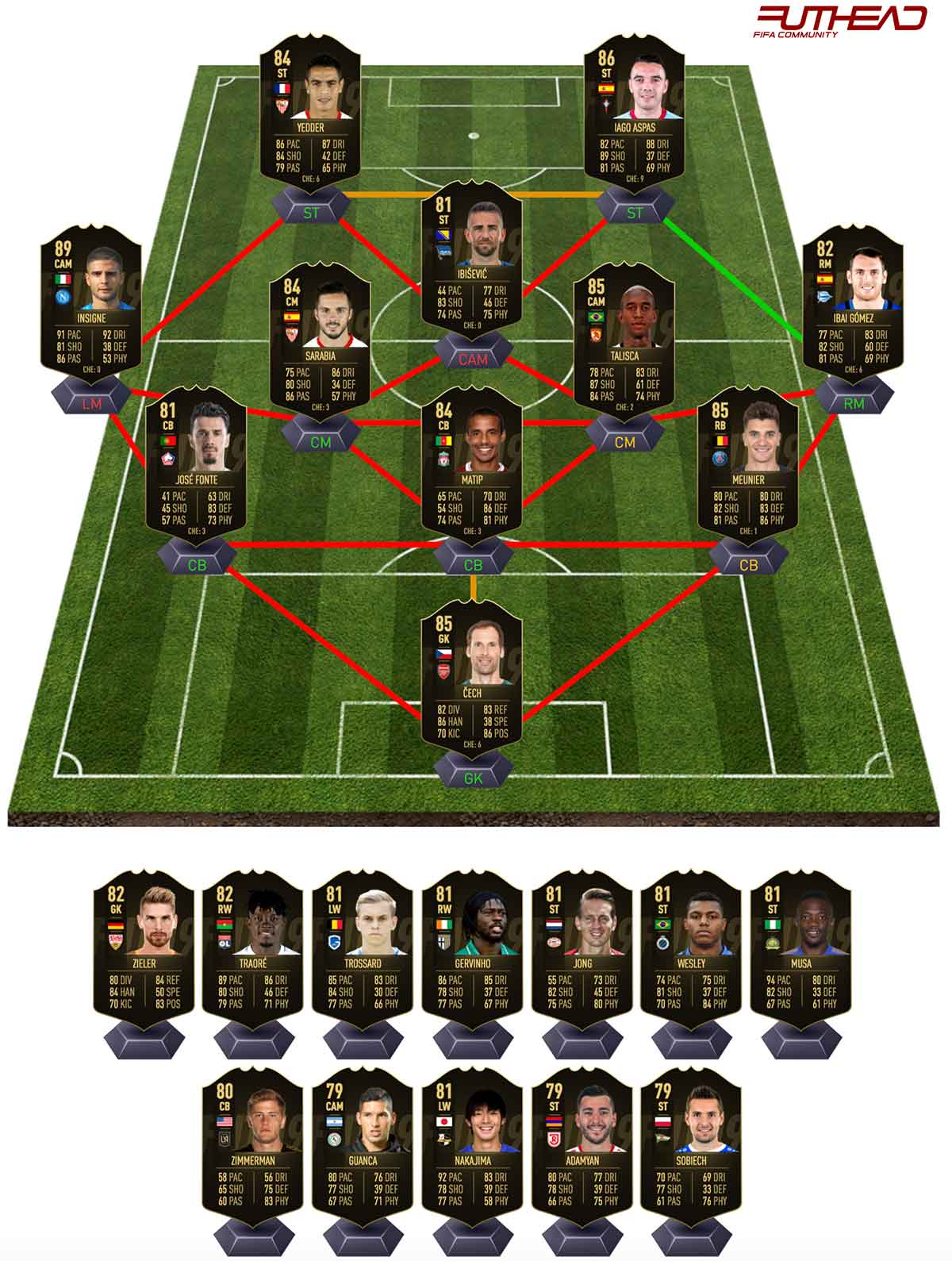 Petr Cech - GK - OVR 82 Many expected Leno to become Arsenal's number one after leaving Leverkusen in the summer but veteran Petr Cech has managed to keep his spot and so far, that decision has been justified. Cech made a total of six saves in Arsenal's 2-0 win over Everton claiming Man of the Match honors in the process. Aaron Ramsey deserves a mention with 2 assists, but it’s the stopper who gets our nod.

Jose Fonte - CB - OVR 78 Lille look set to make it two in-forms from two weeks after their new signing Jose Fonte was involved in two goals. Scoring one and assisting another, the Portuguese defender was awarded with a 7 from L'Equipe, but more importantly the three points went to Lille as a result.

Joel Matip - CB - OVR 81 Liverpool continue their astonishing run making it seven wins from seven with a 3-0 win over Southampton. With three difficult games now coming up ,we will be able to see just where they stand in the title race. Joel Matip scored the second of those three goals and was there when needed at the back.

Thomas Meunier - RB - OVR 82 Thomas Meunier has always been an attacking presence for Paris Saint Germain, and although is not at the same level reputation-wise as Dani Alves, has always provided PSG with a strong RB option. It was another superb performance from the Belgian this week from which he scored once and assisted another in a 3-1 away win. His performance saw him pick up an 8/10 from L'Equipe, which was the joint highest of the week

Lorenzo Insigne - CAM - OVR 88 There were a few high ratings given by Gazzetta for single contributions this week, which made the selection process very difficult. But one player from Serie A that there are no questions surrounding is Lorenzo Insigne. The Napoli man scored twice in their 3-1 win away at Torino from what looks to be a central position.

Pablo Sarabia - CM - OVR 81 The first of two players I have selected from Sevilla is Sarabia who despite scoring once and assisting another three is not the best option from the match. That being said, is a gold midfielder boasting those contributions going to miss out? I don’t think so. Then again, I am excluding Tomas Vaclik who saved a penalty and made another nine saves from this crazy match, so anything can happen.

Anderson Talisca - CAM - OVR 82 I'm unsure as to how the Chinese Super League was snubbed for Week 1, but with a few more options coming EA's way for this side, surely it can't be a repeat. Talisca is probably the pick of the bunch after his two goals and an assist saw Guangzhou come from two down to win 3-2.

Ibai Gomez - RM - OVR 79 After five games, I doubt anyone saw Alavés as high as third in the table, but after a 5-1 away win at Rayo Vallecano, that is exactly what has happened with an impressive ten points being picked up from their opening five. Ibai Gomez was the main man in their recent victory scoring two of those five goals and being awarded a three-star match performance from MARCA for it.

Iago Aspas - ST - OVR 85 Although the result was far more impressive for Valladolid, I can still see the IF going to Aspas from Vigo's 3-3 draw. Aspas scored two of the three goals which alongside Suarez for Valladolid was the only player to receive 3 stars from Marca. With Aspas being the only gold from that duo, the IF can only really go one way.

Wissam Ben Yedder - ST - OVR 81 Sevilla could realistically pick up three IFs, and not many would be surprised, but in reality, they will likely be capped at two. The one that is guaranteed is Ben Yedder. The Frenchman scored three and assisted another in their previously mentioned 6-2 win over Levante.

Vedad Ibisevic - ST - OVR 77 With only a couple of Bundesliga options being realistic selections Ibisevic's brace stands out and with the Bundesliga regularly picking up at least two IFs, Ibisevic is one that is needed to hit that supposed criteria.

Ron-Robert Zieler - GK - OVR 79 Another week, another Bundesliga keeper IF. Once again, the player of the week award went to a keeper in Germany with Zielers seven saves in Stuttgart's 0-0 draw being enough for him to claim a perfect 1 match rating. Much like Sommer last week I can't see the German missing out.

Bertrand Traore - RW - OVR 79 There are multiple players selected from Ligue 1 this week which does make it risky for players to drop out but one which I feel is a certainty is Traore, the winger scored twice in an impressive 4-2 win over Marseille, picking up an 8/10 in the process.

Gervinho - RW - OVR 77 It's been a while since we have seen Gervinho in FIFA and he looks set to come back with an IF to his name! We have seen high ratings being dished out for impressive goals and it looks as though the same applies now for Gervinho who scored a brilliant goal in Parma's 2-0 win over Cagliari. Gazzetta awarded him an 8 for that strike and likely Player of the Week in the process.

Leandro Trossard - LW - OVR 76 The first of two selected from the Belgian league, both for hat tricks is Trossard. Genk ran away as 5-2 winners away at Cercle Brugge with Trossard scoring the second, fourth and Fifth Genk goals from the wing.

Luuk De Jong - ST - OVR 78 I really debated this one for some time with myself consistently telling myself that one goal was simply not enough for a striker to be selected but when VI gave De Jong a match rating of 9, something which very rarely happens, I just couldn't ignore him. Especially with it being the biggest game in Holland. PSV went on to beat Ajax 3-0.

Wesley - ST - OVR 75 Gent have become an impressive side in recent seasons becoming more of a threat to what had previously been a Brugge and Anderlecht dominant division, but they were put back in their place on Sunday with Brugge's travelling only to pick up a convincing 4-0 win. Brazilian striker, Wesley scored three of those goals and thus easily makes the squad.

Ahmed Musa - ST - OVR 75 With it only being the second week of this FIFA, we are yet to see the impact that midweek games are going to take but this is one that I just can't ignore with Musa being a gold item as well. His goals come in Al-Nassr's 3-0 away win with the speed demon claiming MOTM in the process.

Walker Zimmerman - CB - OVR 72 We start the reserves with not a hat trick this time but a brace from defense. Zimmerman managed to score both Los Angeles goals in a 2-0 with over San Jose. A mention is worth going to Vela who picked up both the assists but as for the IF I just can't overlook a defender with two goals in a 2-0 win.

Cristian Guanca - CAM - OVR 69 Onto a second predicted IF from the Saudi division and once again it comes after a hat trick, this time from Guanca who played in a central role rather than his usual wide spot. Scoring all three of his side’s goals with the second and third coming late on he looks set to secure an IF.

Shoya Nakajima - LW - OVR 77 With so many options this week I can see the golds sneaking into the reserves section which although doesn't happen often will be difficult to avoid this time around. Shoya scored twice and assisted another. Making him the stand out player in Portugal.

Sargis Adamyan - ST - OVR 69 The past few sides have seen the Bundesliga 2 player of the week awarded an IF and I can't see that being any different this week after Adamyan managed to score three in a shock 5-0 win away at Hamburg.

Artur Sobiech - ST - OVR 69 We go over to Poland now where we find ourselves with yet another hat trick. This time it comes in a 3-3 draw of which Sobiech's goals saw them take a 3-0 lead in but with Sobiech being a striker what more can you expect him to do and for that reason I still expect him to feature on Wednesday.