FIFA 18 Team of the Week 22 Predictions

Published on by Aarong222 150 Comments Updated on 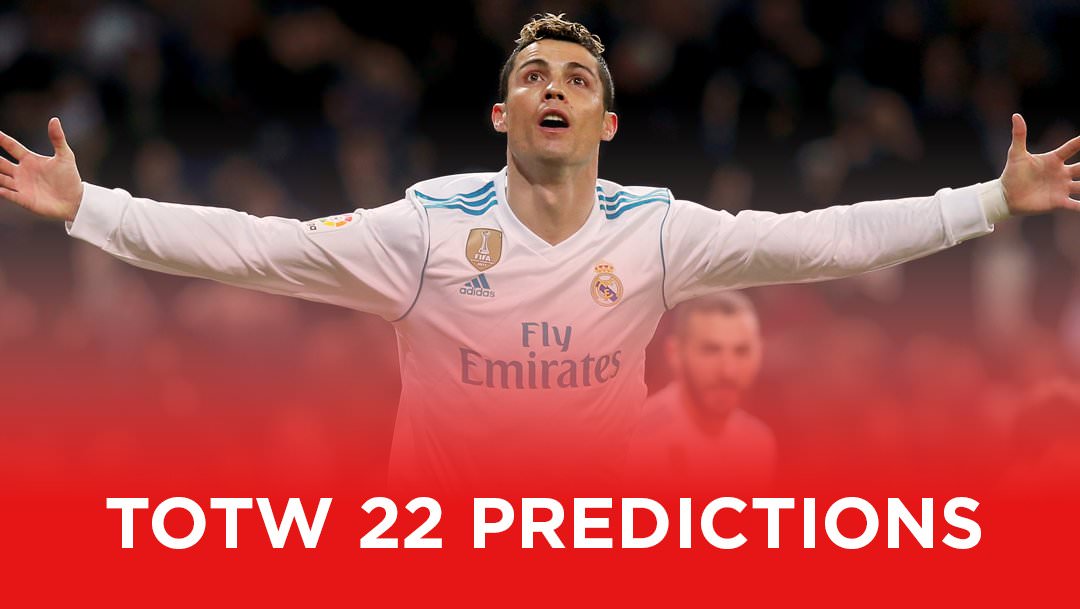 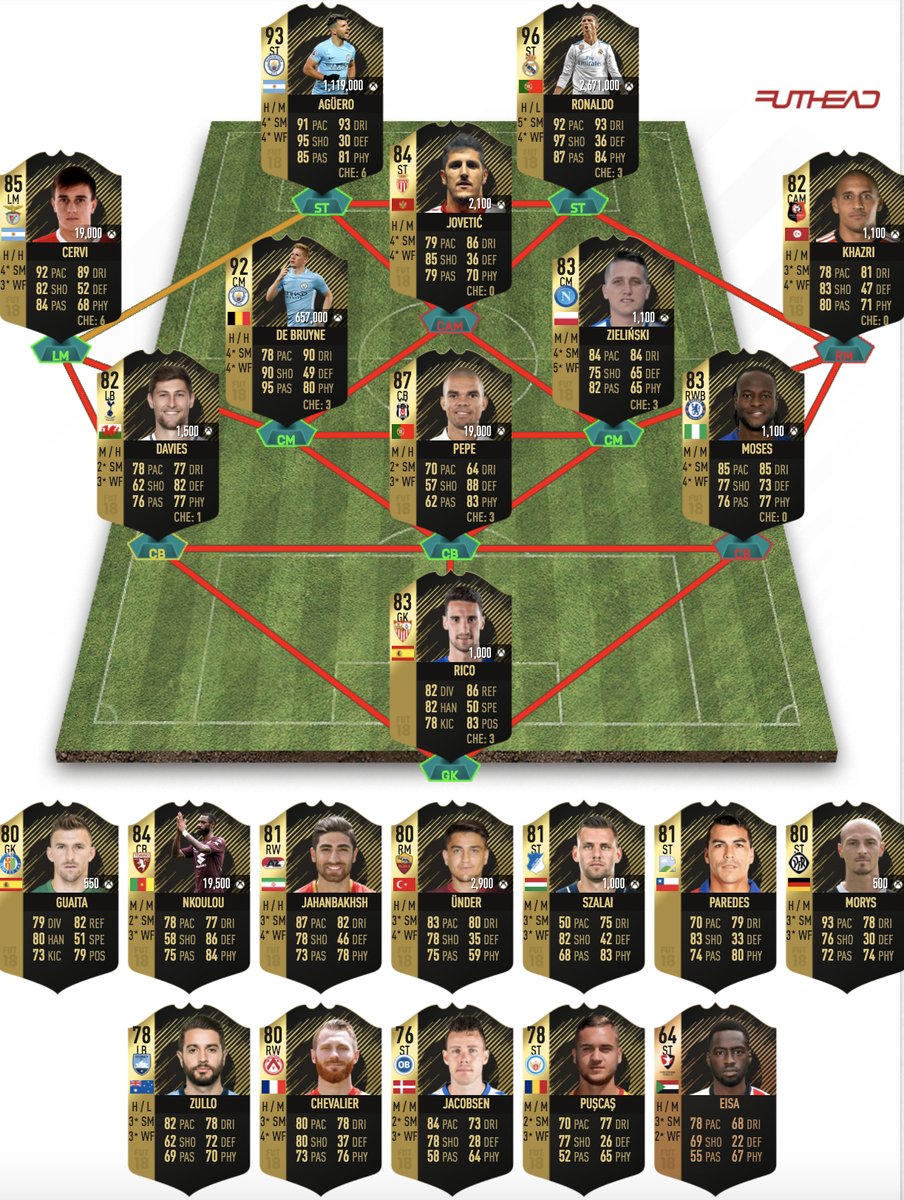 Sergio Rico - GK - OVR 81 There were several keepers in La Liga which performed to a stop standard this week which saw no less than four keepers receive the maximum rating from MARCA. None were better than Rico though who made a total of seven saves alongside saving a penalty to help keep his clean sheet in a 1-0 win.

Ben Davies - LB - OVR 78 The North London Derby saw just the one goal separate the game with Tottenham coming away with the three points. Who scored? You guessed it, Harry Kane. Obviously, the England striker is not getting another IF for just the one goal, so we go for the next best thing with Ben Davies, who assisted said goal.

Pepe - CB - OVR 86 Tallisca continued his good form with another two goals being added to his personal tally but I feel as though his SIF came too close to warrant another IF for two goals however Besiktas did win convincingly and thus I expect them to feature. Pepe is another option after he scored one of five goals and helped to keep a clean sheet.

Victor Moses - RWB - OVR 79 A late addition to the side comes with Moses after Chelsea recorded a 3-0 win over WBA. The Nigerian has picked up some form as of late, now looking to be the favored RWB. He scored the second goal and played a part in the third. Hazard obviously picked up a brace himself but seeing as he featured in TOTW 19 it could be too soon for a TIF there.

Franco Cervi - LW - OVR 78 Perhaps too soon to his last IF but I am going to risk the four-week gap as I personally don't see the problem. There were several options from the Portuguese league but with many of them being forwards and the competition in that position it became difficult for them to make the cut. That leaves the door open for Cervi to pick up a SIF after he scored twice from LW.

Kevin De Bruyne - CM - OVR 89 With Manchester City running away as 5-1 winners after they hosted Leicester on Saturday we have an almost identical situation to that of Ramsey and Mkhitaryan of last week. De Bruyne is obviously the weaker of the two selections but once again with three assists from midfield he becomes very difficult to overlook and thus gets the nod from me.

Piotr Zielinski - CM - OVR 80 Napoli recorded a very impressive 4-1 win when they hosted Lazio this weekend and from that we are inevitably going to see an IF. It is between Jorgino and Zielinski who both picked up the exact same match rating which goes to 3 decimal figures, something I have yet to see before. Seeing as Zielinski was involved in an extra goal that is the only thing I can separate the two players with.

Whabi Khazri - CAM - OVR 78 This week’s performances primarily came from silver players for some reason and thus it leaves us with gaps to fill making it easier for players to find themselves included. Khazri could be someone to benefit from that after his solitary goal saw L'Equipe reward him with an 8/10.

Sergio Aguero - ST - OVR 89 Aguero has done it again. The Argentine added another four goals to his tally during City's previously mentioned 5-1 win over Leicester but despite that there are some doubts over his selection. First, it is just three weeks since his last IF which we have seen players ignored for previously. Additionally, this would be his fourth IF of the season and with a POTM likely on the way now he is running out of room with an inevitable TOTS item being needed.

Cristiano Ronaldo - ST - OVR 94 Surprisingly, this is set to be Ronaldo's first IF of the year, which seeing as he usually has three of four by name is quite something. After three goals and an assist to his name there is no doubt surrounding this one, adding to a very strong strike force this week.

Stevan Jovetic - ST - OVR 81 Perhaps not as attractive as the previous two items but still a very usable player with his all-round game. Jovetic makes his way into the side after scoring two of Monaco's four goals in a convincing 4-0 win away at Angers.

Guaita - GK - OVR 73 One of the surprise results of the week came with Getafe who managed to hold Barcelona to a 0-0 draw. Guaita was MARCA's MOTM after he made six saves to deny one of the world’s best attacking line ups.

Nicolas Nkoulou - CB - OVR 78 Calcio A offered very little in terms of options and thus from the few we have the better performances should thus result in IF's. Nkoulou is one of those after he scored one of two Torino goals in a 2-0 win over Udinese.

Cengiz Under - RM - OVR 74 I don't really know much about this lad who has seemingly gone under the radar but from this season, in recent weeks he is beginning to build some hype surrounding himself. He now looks set to pick up his first IF of the season which will be boosted soon enough should he pick up a winter upgrade. Gazzetta rewarded him with an 8/10 after he scored twice and assisted another in Roma's 5-2 home win.

Alireza Jahanbakhsh - RW - OVR 75 Despite a few players picking up higher match ratings than Jahanbakhsh I feel as though the fact that the AZ winger is gold will help him out. He scored twice and assisted another which when you are gold usually cements a spot in the side.

Adam Szalai - ST - OVR 75 Both Szalai and Kramaric scored two goals in Hoffenheim's 4-2 win and both received a 1.5 match rating from Kicker. Realistically either of those two players could make the cut but seeing as though it was Szalai who received MOTM that edges me towards him.

Esteban Paredes - ST - OVR 76 Despite the fact Esteban missed a penalty he still scored a hat trick for Colo Colo as they scraped a 3-2 home win. It could have been better for the Chilean striker, but all was forgotten thanks to a 91st minute winner.

Matthias Morys - ST - OVR 70 We have seen a couple of silvers sneak into the substitutes in recent weeks and there is upwards of 10 silver players who fully deserve a spot this week. Morys is one of those after he picked up Bundesliga 3 POTW for his hat trick.

Michael Zullo - LB - OVR 68 There have been times of which I would have second guessed myself on this selection but with an increase of A-League players over the past few months I come into this one rather confidently. Zullo was heavily involved offensively during Sydney's 4-0 win picking up the assist on three of the four goals.

Teddy Chevalier - RW - OVR 70 With Anderlecht losing and Brugge only drawing there could be more than one Pro League IF coming our way, but it is only Chevalier who makes my prediction after he scored three of four goals in a 4-0 win at home to Antwerp.

George Puscas - ST - OVR 68 The hat tricks are back in full flow now, which is probably helped by the additional leagues starting up again. Calcio B is not one of those, but it is where we find a hat trick this week. Puscas was the player to do so, during Novara's 3-1 win.

Anders Jacobsen - ST - OVR 66 A league which has recently rejoined the action is that of the Danish one and it was Odense who came back with a bang, winning 6-1 at home. Jacobsen scored three of those goals, which puts him among the contenders.

Mohamed Eisa - ST - OVR 56 Finally, the player we have all been waiting for. A 56-rated bronze striker from league 2. Regardless of the fact that this item is all but useless Eisa does deserve his spot in the side after banging in three goals for Cheltenham in their 5-1 win over Port Vale.