FIFA 18 Team of the Week 8 Predictions

Published on by Aarong222 276 Comments Updated on 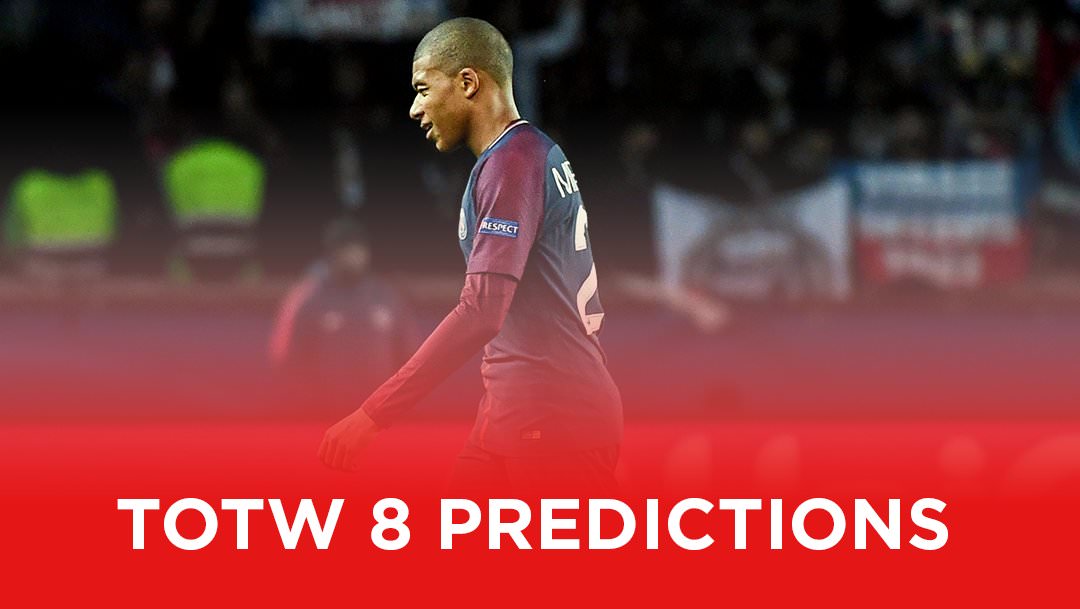 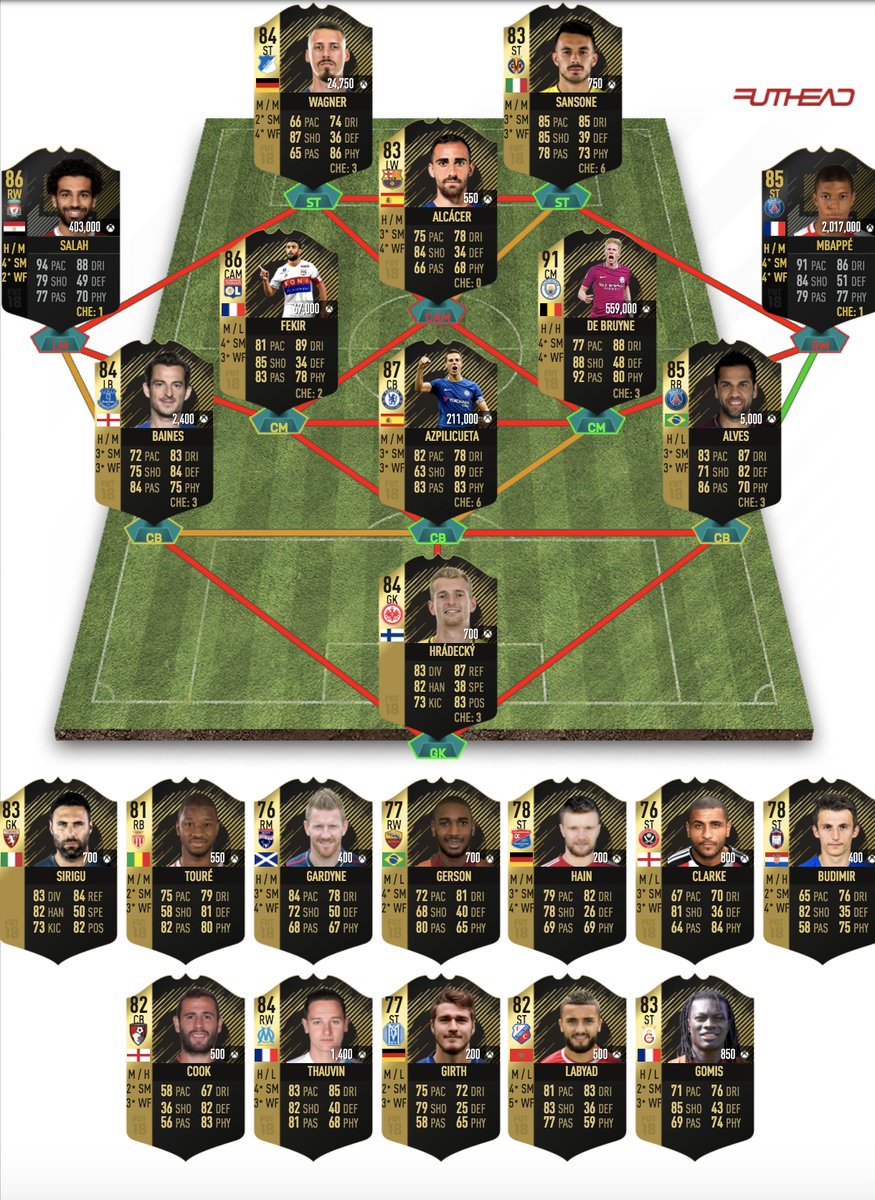 Lukas Hradecky - GK - OVR 81 The keepers have been kind to me recently with a high hit rate being achieved. Lukas is another I am very confident on after he picked up POTW in German, achieving the highest score possible from Kicker after making six saves in a 2-1 win over Werder Bremen.

Leighton Baines - LB - OVR 82 It looked like Everton were heading to yet another defeat, trailing 2-0 to Watford in the 64th minute but they showed real character to miraculously come back and win 3-2. Baines was back on set piece duty with Rooney being subbed and rewarded the Toffees with a goal and assist.

Azpilicueta - CB - OVR 85 The first of numerous SIFs to make the cut for me this week is Azpilicueta. The Spaniard continued his impressive season against Manchester United were he assisted the only goal of the game in Chelsea's 1-0 win. We have seen numerous big-name PL matches have players shoved in and thus I can't see this one being overlooked.

Dani Alves - RB - OVR 84 The first of two PSG players I have opted to select from their 5-0 win is Alves. The Brazilian picked up an 8/10 from L'Equipe which for a defender usually sees you in. He was awarded the eight for two assists alongside his efforts to keep the clean sheet intact.

Kylian Mbappe - RW - OVR 83 The obvious choice from PSG comes with Mbappe, of whom was the stand out player in their 5-0 win over Angers. The French wonderkid scored two and assisted another, picking up an 8/10 from L'Equipe for doing so.

Paco Alcacer - LW - OVR 79 It doesn’t seem to matter who Barcelona play in their front three, they just seem to perform. It was Paco's turn to excel this week, scoring both their goals in a 2-1 win over Sevilla.

Nabil Fekir - CAM - OVR 82 Although it turned out to be the correct call it was difficult to ignore Fekir's brace last week. So, when the Frenchman repeated that during Lyon's 5-0 win over St Etienne I had to include him to make the side this time around.

Kevin De Bruyne - CM - OVR 89 KDB seems to get in for very little each time but if anything, that just shows how much he does for City. The Belgian performed in a big game once again as City recorded a 3-1 win over Arsenal. The Belgian scored the opener and went on to claim MOTM

Mohamed Salah - RW - OVR 83 Salah OTW investors look to be set with a second upgrade after just eight weeks, making him the best OTW by far to date. The Egyptian scored two of Liverpool’s four goals in their 4-1 win over West Ham which ultimately led to the sacking of Billic.

Nicola Sansone - ST - OVR 79 With the lack of both Liga BBVA options and gold strikers with Sansone picking up three stars for his brace against Malaga he becomes a viable option for this side. There really are only a handful of options for this spot and thus I think the Italian will stand out.

Sandro Wagner - ST - OVR 79 Another potential SIF now and with only Hradecky being clear cut from the Bundesliga, Wagner who scored twice and picked up a 1.5 from Kicker becomes a viable option.

Salvatore Sirigu - GK - OVR 79 The sub keeper spot was difficult to select but with the Italian league having literally no golds to choose from it leaves the door open for Sirigu who picked up a 7.5 from Gazzetta for making a total four saves in Torino's 1-1 away draw with Inter.

Almamy Toure - RB - OVR 73 Monaco recorded the biggest win in Ligue 1, in a week which saw several moral boosting wins, with a score of 6-0. Toure is the best option after the RB assisted three of the six. Similarly named Traore is the other option from the match.

Gerson - RW - OVR 67 It's safe to say that this is not the IF everyone is looking forward to and quite easily could become one of the worst gold IFs we have seen in a long time. Putting that to one side he does deserve his spot in the side, after picking up MOTM for scoring twice in Roma's 4-2 win over Fiorentina.

Michael Gardyne - RM - OVR 66 After a long time of seeing their players snubbed, the SPL received two IFs last week. Gambling on the trend to continue I have opted for Gardyne in a position which is open to multiple options. The Ross County midfielder scored twice and assisted another in their 3-2 win.

Stephan Hain - ST - OVR 67 Your weekly Bundes 3 inclusion now. This time it's Hain after he scored a hat trick during his sides 3-1 away win. Hain went on to claim player of the week and thus I believe he is the best option from the division.

Leon Clarke - ST - OVR 65 Not many expected Sheffield United to be challenging for promotion at the beginning of the season but now sitting in second after 16 games the talk is starting to happen. Clarke was in the goals on Saturday, scoring all four in a 4-1 win over Hull.

Ante Budimir - ST - OVR 70 Continuing the trend of big league strikers scoring twice to get in we have Budimir, who scored two of Crotone's three in their 3-2 win. Budimir went on to claim POTW in Italy with an 8/10 from Gazzetta.

Steve Cook - CB - OVR 77 The final PL selection I have made this week comes with Cook. The English defender scored the only goal of the game as Bournemouth went on to beat Newcastle 1-0.

Florian Thauvin - RW - OVR 82 The Ligue 1 selections just keep coming. Thauvin put in one of the better shifts of the week, scoring two and assisting another in a convincing 5-0 win over Caen.

Benjamin Girth - ST - OVR 66 Two players from the third tier of Germany has not been occurring recently but with a lack of hat tricks in general I am willing to take the punt on it happening this week. Girth scored all three Meppen goals in a narrow 3-2 home win.

Zakaria Labyad - ST - OVR 75 This ones an interesting one as if he was just one rating lower I probably wouldn't have made the prediction but seeing as he is a gold I am willing to take the punt. Labyad, who was playing a ST role scored both Zwolle goals as they upset Ajax with a 2-1 away win.

Bafetimbi Gomis - ST - OVR 79 Gomis has been in on the edge of an IF on multiple occasions this season but never quite made the cut. He could finally be picking up that IF, the eighth time of asking after scoring twice and assisting another in Galatasaray's 5-1 home win on Friday.