Published on by Aarong222 295 Comments

Headlining in week 33 we have James Rodriguez, Diego Costa, Gary Cahill and yet another Thauvin. 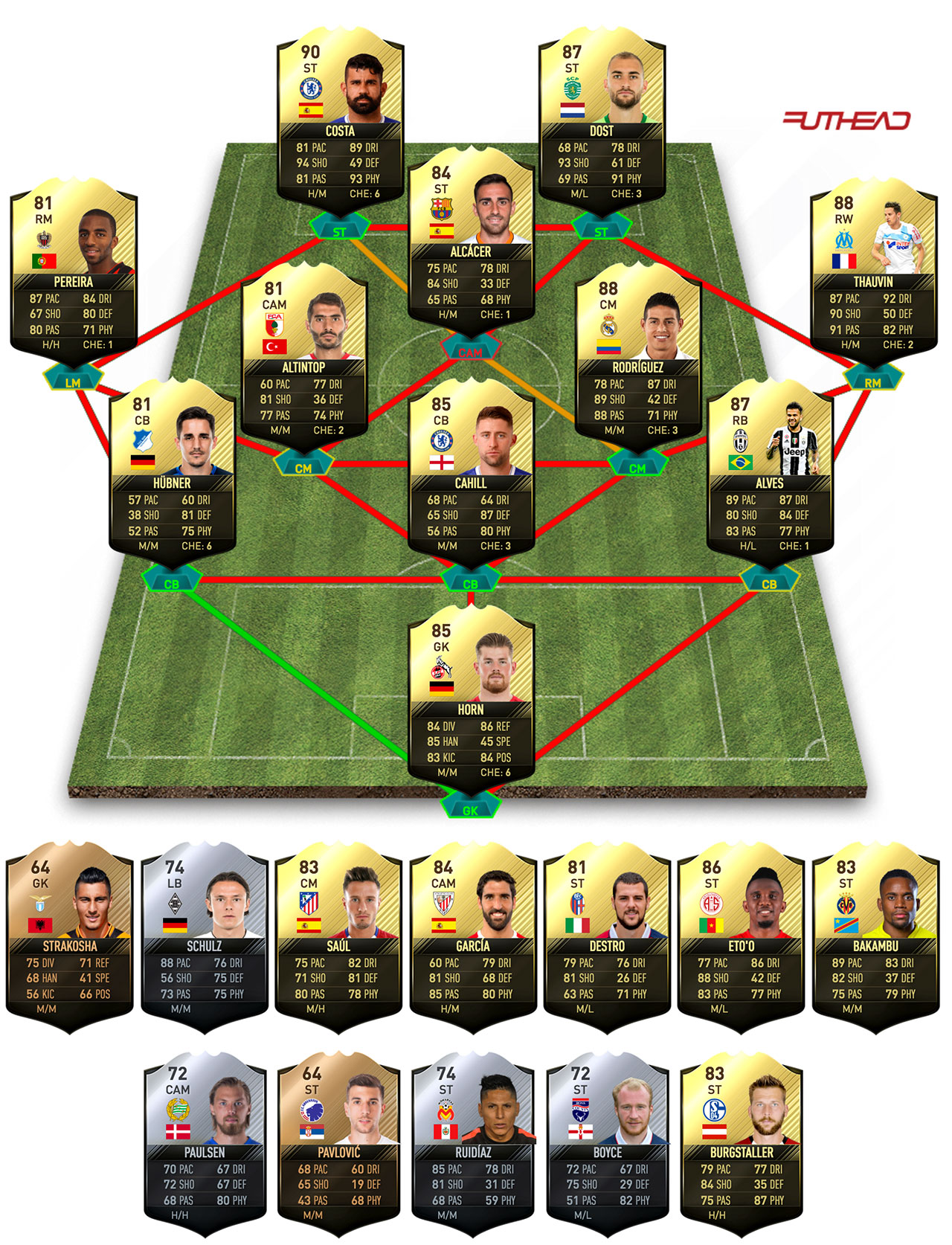 Timo Horn - GK - OVR 82 Koln played out a 0-0 draw with Dortmund in another low scoring game for the German outlet. It may have been another story had it not have been for Horn though. Koln's keeper was in inspired form making a total of four saves to keep the clean sheet. He was awarded with a 1.5 from Kicker making him keeper of the week.

Gary Cahill - CB - OVR 83 Cahill scored in both of Chelsea's wins this week but specifically comes from their weekend win over Everton. Cahill scored the second of their three goals and helped to keep a clean sheet in their 3-0 away win.

Benjamin Hubner - CB - OVR 75 Hubner scored a last-minute winner to lead Hoffenheim to a 1-0 win over Frankfurt helping him to claim a spot in Kickers TOTW. There are several other defenders who could also make the cut but seeing as it came late in the game I think that’s an additional motive to select the German.

Dani Alves - RB - OVR 85 Serie A offered next to nothing in terms of IF options and thus I am taking the punt on Alves. Although it was Juventus who dropped points thanks to a late equilser from Atalanta Alves was the joint highest scorer with a 7 after he scored on of Juve's two in a 2-2 draw. Juventus have picked up a lot of cheap IF's this year and I wouldn't be surprised to see another here.

Ricardo Pereira - RM - OVR 78 Nice really opened the title race in France this weekend with a 3-1 win over PSG, a result which puts them back in the title race and allowed Monaco to take the lead. Pereira claimed MOTM with an 8/10 for his goal and assist which against PSG I can't see missing out.

Halli Altintop - CAM - OVR 76 Augsburg recorded a convincing 4-0 win over Hamburg. Altintop scored both the first and second goals which saw him pick up a 1.5 rating from Kicker. Multiple midfielders picked up that mark however I think that Altintop will get the nod for his brace.

James Rodriguez - CM - OVR 87 You could argue that once again Isco was Madrid’s main man but with so many IF's already I can see him being snubbed in favour of another Madrid midfielder. Rodriguez is yet to pick up an IF so far, this FIFA and after he bagged himself a brace in their 6-2 away win over Deportivo now is the prime time for that.

Florian Thauvin - RW - OVR 81 It's been quite the season for Thauvin who added another two goals and an assist to his tally this weekend. The young French winger is likely to attract a lot of attention over the summer after developing into one of the best players in the league. He picked up another POTW award with an 8/10

Diego Costa - ST - OVR 86 Chelsea recorded two wins from two this week which puts them that step closer to officially securing the title. The first of the two games is where Costa comes from after he scored twice and assisted another in their 4-2 win over Southampton.

Bas Dost - ST - OVR 80 Bas Dost continued his ridiculous run of form with a hat trick away at Braga which could end up being a big result come the end of the season keeping options open for Sporting should over results go their way.

Paco Alcacer - ST - OVR 81 Barcelona picked up a massive 7-1 win during the BBVA's mid-week set of fixtures however there was still no stand out candidate for the IF. I have opted for Paco who scored two of the seven however Gomes is another viable option or even both at a push.

Thomas Strakosha - GK - OVR 64 With Keita being unable to pick up an IF due to being in the current week’s side Strakosha looks set to be the Lazio player. The keeper picked up an 8/10 from Gazzetta after he made five saves during Lazio's shock 3-1 away win over Roma who are now pretty much officially out of the title race.

Nico Schulz - LB - OVR 73 Schulz was given the more defensive role of LB for Gladbach this weekend however it was his offensive performance which gets him into this prediction after he both scored and assisted one each during a 2-1 win.

Saul - CM - OVR 80 Atletico recorded a comfortable 5-0 win away to Las Palmas on Saturday of which two players could potentially pick up an IF from. Firstly, it is Gameiro who missed out after his brace with myself opting for another player with two goals in Saul. Both players have a strong chance of making the cut but in this scenario, I usually opt for the player further back in the field.

Raul Garcia - CAM - OVR 81 Lots of high scoring BBVA fixtures over two game-weeks has inevitably resulting in a lot of IF's from the division. Garcia is another after he scored twice for Bilbao in an impressive 3-0 away win over Celta Vigo.

Mattia Destro - ST - OVR 78 As already stated Serie A offered very little and thus I am giving the nod to Destro over several other gold strikers which scored twice due to the league he’s is playing in. Destro's brace came in Bologna's impressive 4-0 win over Udinese.

Samuel Eto'o - ST - OVR 81 Eto'o remains a rather nostalgic addition to any TOTW and thus is always welcomed warmly and for once he fully deserves his spot after scoring a hat trick in his sides 5-2 away win. Potentially a re-release of his SBC in an IF version but quite difficult to tell how EA will play this one.

Cedric Bakambu - ST - OVR 81 I almost took the punt of Bakambu last week but that wouldn't have worked out. This time around I am going to predict the Villarreal striker though after he scored another two goals. This time they came in a 3-1 win over Gijon of which Bakambu picked up MOTM with 3 from Marca.

Bjorn Paulsen - CAM - OVR 67 A bit of a punt but the last time I bottled a Swedish league player he made the cut so I don't want to make the same mistake twice. Paulsen was involved in three of Hammarby's goals with two of his own going alongside an assist.

Andrija Pavlovic - ST - OVR 61 There is still no set guide to which games count and which don’t in terms of promotion play off matches and with EA being very hit and miss with them over the last few years there is no indication whatsoever. When a hat trick occurs, they are always hard to ignore though and with Pavlovic scoring all three Copenhagen goals in a 3-0 win he makes my side.

Raul Ruidiaz- ST - OVR 73 Ruidiaz was always an outsider while creating the silver MC TOTS and it's just as well that he didn’t make the cut after the Peruvian scored a hat trick this weekend in his sides 4-0 win over UNAM.

Liam Boyce - ST - OVR 67 This season EA have started to ignore many hat tricks which are heavily penalty based and although two of Boyce's goals came from the spot the fact he scored four should stand out. The NI striker scored all four of Ross County's goals in their 4-0 home win over Inverness.

Guido Burgstaller - ST - OVR 75 Burgstaller picked up player of the week in Germany for his brace in Schalke's shock 4-1 away win over Leverkusen. The Austrian striker picked up a perfect 1 mark after he scored two of the four goals.