Published on by Simpleblue 4 Comments

Before you start looking at the potential players, I wanna say a few words about the selection. First of all, I'm not an active follower of the league as it's impossible to follow the games due to the different time zones and second, the selection is based of last season and last year's official MLS Best XI awards, not the season which is currently underway! Also some players who could have gotten in probably have the left the league and therefore can't be included like Buchanan, keep that in mind. And now feel free to have a look and comment down below who you think deserves to be in! 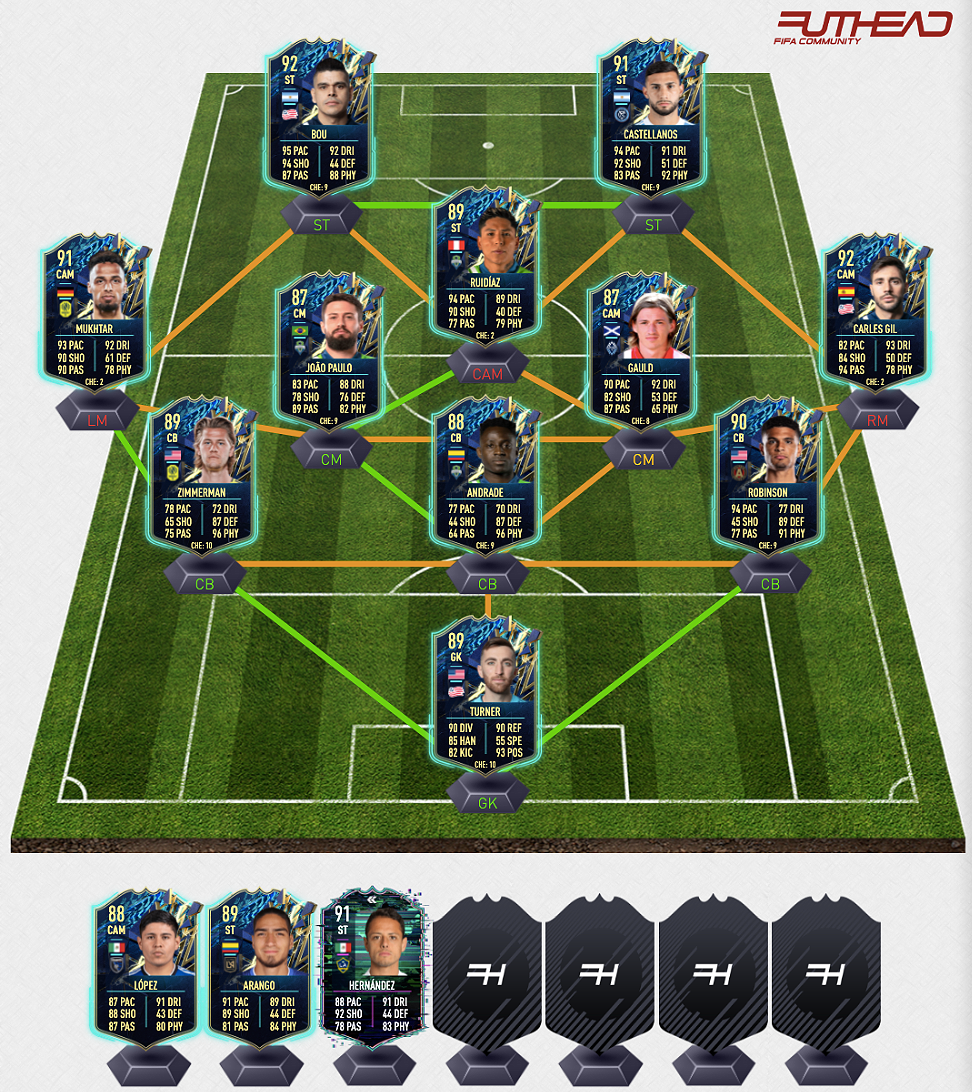 M. Turner GK – New England - 75 -> 89 Rated: We're starting the MLS predictions with the keeper and it's 2021 Allstate MLS Goalkeeper of the Year Turner. Matt Turner led the New England Revolution to their first Supporters' Shield and the Eastern Conference's top overall seed. Turner's 17 wins in 28 matches are tied for the most the season. He has emerged as a breakout star for the United States, contributing to the team's 2021 Concacaf Gold Cup title and strong start in World Cup qualifiers.

W. Zimmermann CB – Nashville SC - 74 -> 89 Rated: Leading Nashville SC to new heights in 2021, Walker Zimmermann was named MLS Defender of the Year for the second straight season and was included in his third straight Best XI. Zimmermann led the Boys in Gold to a league-tying 13 clean sheets as they went unbeaten at Nissan Stadium. The Georgia-born defender has accumulated 22 caps for the USMNT and helped the United States win the 2021 Concacaf Gold Cup.

Y. Andrade CB – Sounders FC - 76 -> 88 Rated: Playing his first full MLS Season, Yeimar Andrade headlined a suffocating Seattle defense that allowed just 33 goals – tied for the fewest in the league. Yeimar's league-leading 86 interceptions are the most in a single season in MLS since 2018 and his strong showing in the Seattle kit earned him a call-up to Colombia's national team for the Conmebol World Cup qualifying last November too.

M. Robinson CB – Atlanta United - 86 -> 90 Rated: The last defender in the starting XI is Miles Robinson. With nearly 70% of his aerial duels won, Robinson has utilized his imposing frame all year long for an Atlanta United side that leads the league in duel success. During 25 matches in which the defender played the full 90 minutes, Atalanta conceded an average of just 0.92 goals and tallied nine clean sheets. Robinson's development has fueled his emergence as a go-to USMNT defender, helping the Yanks to the 2021 Concacaf Gold Cup crown as he contributes to World Cup qualification.

Joao Paulo CM – Sounders FC - 75 -> 87 Rated: Leading a resilient Sounders side to the No. 2 seed in the Wester Conference, Joao Paulo paced Seattle with eleven assists and three goals. The Brazilian midfielder, who joined Sounders FC prior to the 2020 season, was also a finalist for the 2021 Landon Donavan MLS MVP award and finished the 2021 campaign ranked first in tackles won.

R. Gauld CAM – Whitecaps FC - 75 -> 87 Rated: Once a Dundee United wonderkid, the now 26-year-old Gauld joined Vancouver in August 2021 and to say he has hit the ground running would be an understatement. The Whitecaps had won just three of their 16 fixtures in the 2021 season before Gauld's arrival and after his debut they became one of MLS's form teams. Gauld's performances proved a catalyst for their playoff hopes, although he couldn't prevent an eventual first-round exit at the hands of Sporting KC.

H. Mukhtar CAM – Nashville SC - 88 -> 91 Rated: In Germany he was considered a top talent who did not made the breakthrough, in the MLS he is now one of the superstars. During his first full MLS season, Hany Mukhtar burst onto the scene in a big way – recording a league-high 28 combined goals and assists. Mukhtar's contribution for Nashville was critical given the team's defend-first nature and earned him second place in the MVP pick.

Carles Gil CAM – New England - 87 -> 92 Rated: The catalyst behind New England's record-breaking year, Carles Gil's 18 assists and four goals led the MLS original club to a Supporter's shield and broke the all-time MLS point record in the process. Gil earned MLS Comeback Player of the Year honors following his sensational season and also was named 2021 Landon Donovan MLS Most Valuable Player after pulling the strings and being the orchestrator of his side.

R. Ruidiaz ST – Sounders FC - 79 -> 89 Rated: The first attacker in my prediction is Ruidiaz. The Seattle Sounders talisman led the Western Conference side in goals for the fourth straight yeas as he racked up 17 scores on the season. Serving as the impetus for the Seattle's attacking success, the Sounders outscored opponents by 20 goals in matches in which Ruidiaz found the back of the net.

Castellanos ST – New York City FC - 78 -> 91 Rated: Leading NYCFC to the No. 4 spot in the Eastern Conference, Valentin „Taty“ Catellanos scored a league-high 19 goals last season in a tightly contested race that came down the final day of the regular season on MLS Decision day, with his eight assists holding off Ola Kamara. He was the first NYCFC player to win the award in club history and also became the first league's player from Argentina to claim the scoring crown and reportedly Everton and and a few other Premier League clubs are considering signing him although Castellanos wanted to join River Plate back in January to boost his hopes of a call-up for the National Team.

G. Bou ST – New England - 84 -> 92 Rated: The last player in my prediction before we start looking at the potential SBC and Objective player options is Gustavo Bou. Having joined the Revolution in July 2019 from Club Tijuana for a club-record fee, Bou made an instand impact. In the most prolific season of his 14-year career, Gustavo Bou contributed to New England's remarkable season with 15 goals and nine assist and was a key factor for his side's success last season. En route to a Supporter's shield, Bou cemented the Revs atop the Eastern Conference early in the year with a burst of 11 goals in just 13 matches played.

J. Lopez CAM – SJ Earthquakes - 69 -> 88 Rated: Starting to look at the options for SBC's and Objectives now and my first choice is Javier Eduardo Lopez who has left behind the problems that kept him out from Chivas for a year and a half and found consistentcy in the MLS. He had a great campaign in the MLS last season for the San Jose Earthquakes in which he scored 12 goals and gave three assists and although it's unsure if he'll leave San Jose this summer when his loan spell ends he was one of the best players last season and deserves recognition in the MLS TOTS.

C. Arango ST – LAFC - 72 -> 89 Rated: Another one who shone bright among a class of nearly 250 star-studded newcomers last season was Cristian Arango. Arango joined LAFC from Colombian top-flight side Millonarios FC and contributed a team-high 14 goals and two assists across his first 17 MLS appearances. The 26-year-old LAFC forward has been named the 2021 MLS Newcomer of the Year, beating out Whitecaps midfielder Ryan Gauld and San Jose midfielder Eduardo Lopez.

J. Hernandez ST – LA Galaxy - 84 -> 91 Rated: The last player in here is former Manchester United striker Javier „Chicharito“ Hernandez. The 33-year-old, who is unlikely to appear at this year's World Cup despite Mexico's qualification, had a tough few years on the pitch after his stint at West Ham between 2017 and 2019 and is looking to be growing back into his old self. A Team of the Season card for him won't most likely not happen so a Flashback card would make up for it.