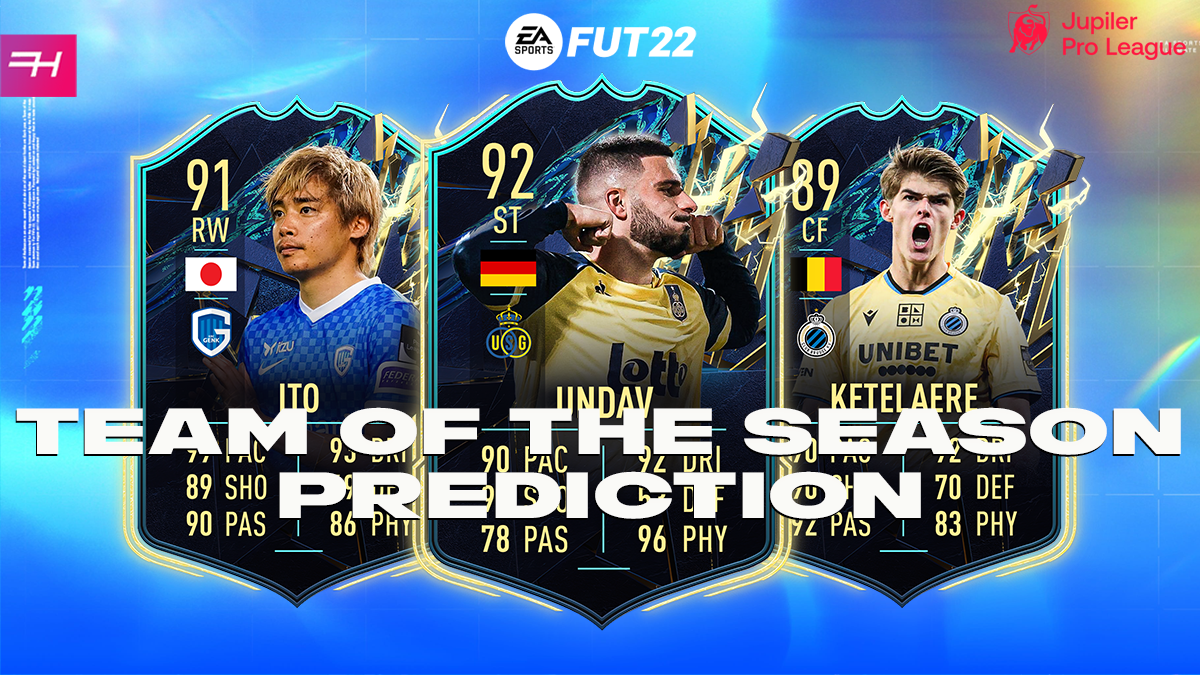 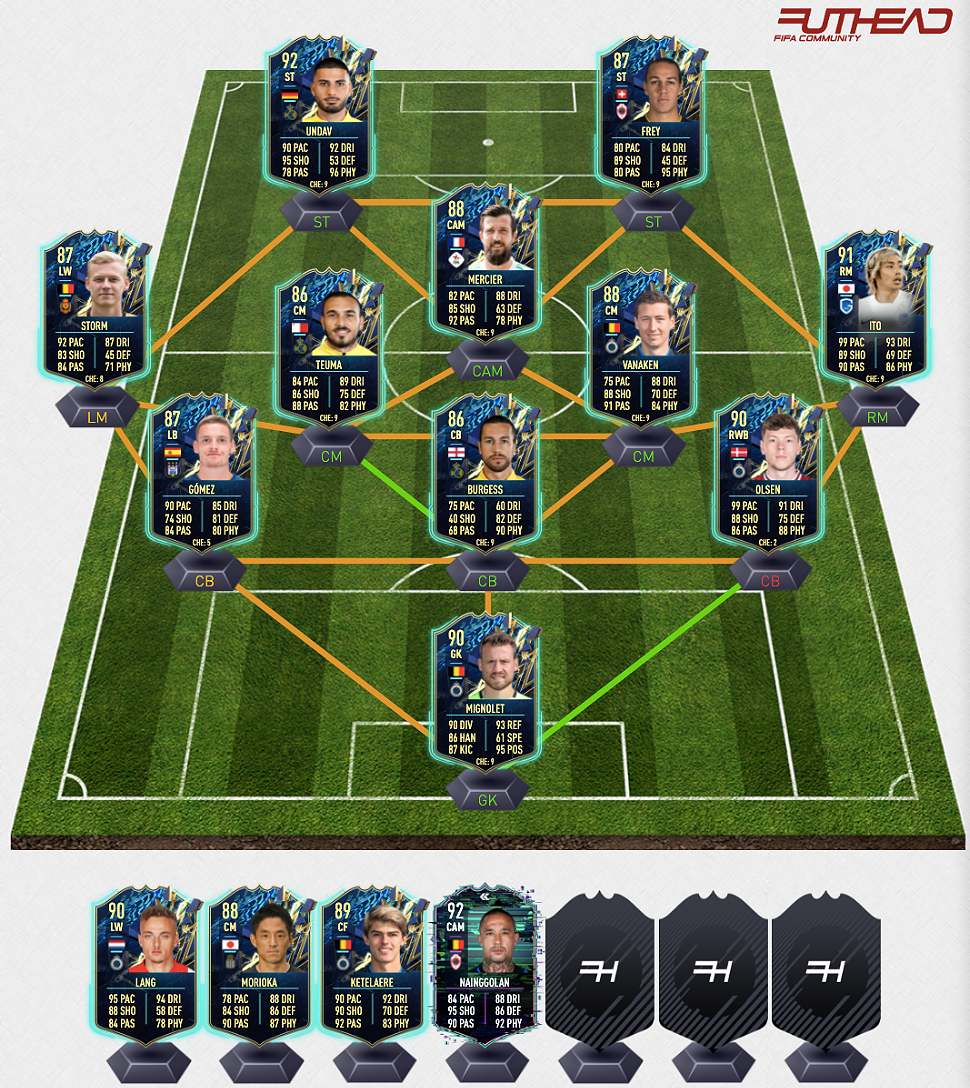 S. Mignolet GK – Club Brugge - 80 -> 90 Rated: Starting off with the goalkeeper from the Pro League prediction and it's former Liverpool shot-stopper Simon Mignolet. Club Brugge managed to clinch the league title for the third consecutive season in the Championship playoffs and Mignolet had a big influence in it, just conceding once in 5 games and he kept a clean sheet a total of 16 times throughout the whole season.

S. Gomez LB – RSC Anderlecht - 68 -> 87 Rated: Starting with the first defender in the prediction and it's former Borussia Dortmund player Sergio Gomez. His time at Dortmund wasn't going well for him so he joined Anderlecht on a permanent deal after a loan spell at Huesca which turned out to be the best for him as he established himself as the starting left-back in the squad. The numbers speak for themselves, Gomez impressed a lot on the left side, finishing his campaign with six goals and eleven assists.

C. Burgess CB – Union SG - 68 -> 86 Rated: Next up is former Portsmouth defender Burgess who joined promoted side Union SG in 2020 and made it a starter in the side who surprised the whole league in 2021/22. Despite not winning the league title due to their poor run of games in the playoffs, Burgess still managed to impress during the regular campaign and he has helped his side just conceding 27 goals in 34 games which was the best defensive record until the playoffs started.

Skov Olsen RWB – Club Brugge - 82 -> 90 Rated: The last defensive player in here is Club Brugge's Skov Olsen even though defensive player really doesn't fit to him if I'm honest. The young Danish international joined Brugge in the winter transfer window from Serie A side Bologna and instantly made an impact, being able to play numerous different positions on the pitch. On top of that he also managed to record good numbers in front of the goal with 5 goals and 8 assists.

T. Teuma CM – Union SG - 69 -> 86 Rated: Next up is Teddy Teuma from Union SG, one of the players who were instrumental in his side's incredible league campaign. He pulled the strings in Union's midfield, contributing to goals and assists with six goals and nine assists to his name and should make it into the side if it's not about selling packs.

H. Vanaken CM – Club Brugge - 78 -> 88 Rated: Next up we're talking about a Club Brugge veteran in the name of Hans Vanaken. Vanaken, well known in Belgium for his prolific goal scoring ability despite playing in midfield, is now playing for the Belgium side for 8 years and still one of the most important, if not the most important player in the squad. He is a rare exmaple of quality who has stayed and flourished at Club Brugge and has been a key figure in his club's recent campaign which ended in a third consecutive league title.

X. Mercier CAM – OH Leuven - 74 -> 88 Rated: One of the few who isn't playing for the famous clubs in Belgium who could make it into Team of the Season is the 32-year-old, French born midfielder Xavier Mercier. The former Cercle Brugge midfielder is now playing for OH Leuven and although he might not have as high numbers as Vanaken for example he has been one of the best midfielders this season in the league and deserves a TOTS card.

N. Storm LW – KV Mechelen - 72 -> 87 Rated: The Belgium Pro League is home of a lot of talented young players but also has some gems who are not considered as such anymore, one of them is Mechelen's forward Nikola Storm. At 27, some may consider him a late boomer in Belgian Pro League terms, with most players having breakthrough seasons at much younger age. So far this season, Storm has been Mechelen's biggest goal contributor, with 15 goals and 4 assists to his name and has doubled his goal tally from last season.

J. Ito RW – KRC Genk - 86 -> 91 Rated: One of the most popular inform this at the start of Fifa 22 was Junya Ito and his TOTS could be a really cheap and overpowered fun card! The Japanese winger, who's loan deal from 2019 was turned into a permanent in March 2020, scored 8 goals and recorded 13 assists for his side in the 2021/22 campaign and although his contract is still running until 2024 he hasn't ruled out a transfer to a top-five league in the summer.

M. Frey ST – Royal Antwerp FC - 72 -> 87 Rated: The first of two strikers in my prediction and the second best goal scorer in the league comes from Royal Antwerp. The Swiss attacker joined Antwerp in the summer last year from Turkish side Fenerbahce after a loan spell at Waasland-Beveren and nearly doubled his tally, ending the season with 23 goals and 4 assists.

D. Undav ST – Union SG - 84 -> 92 Rated: The last one is Deniz Undav who's story has echoes of Jamie Vardy. Like Vardy, Undav comes from humble beginnings and faced rejection at a young age. He started working in a factory and eventually, he found a semi-pro club willing to give him a chance and joined Havelse in the German regional league whilst still working in the factory. After scoring plenty of goals for Havelse and another Regionalliga side SV Meppen, Undav got his big break when joining Union in 2020. He has enjoyed a fantastic two years with Union and his amazing scoring record helped them to promotion last season and fairytale campaign this season which sadly not ended up in winning the league. It will be interesting to see how he will perform next season, Brighton & Hove signed him for a fee of €7m.

N. Lang LW – Club Brugge - 78 -> 90 Rated: The first player who could be released either via SBC or Objective is Club Brugge's Noa Lang. After graduating from Ajax's famous academy, Lang moved to Club Brugge initially on loan before a move was made permanent in the summer of 2021 and since arriving in the Belgian capital, his success has merited three caps for the Dutch national team having made his debut for them earlier this season. His numbers are pretty good with 7 goals and 12 assists and reportedly clubs like Arsenal or Leeds are already looking for a transfer in the summer.

R. Morioka CM – Sp. Charleroi - 74 -> 88 Rated: Another Japanese player from the Pro League who could pick up a Team of the Season card is Sporting Charleroi's Ryota Morioka who was instrumental in his side's challange for a European starter spot for next campaign. They failed with Genk and Gent in their qualification group but Morioka still managed to impress with 4 goals and 11 assists.

De Ketelaere CF – Club Brugge - 75 -> 89 Rated: De Ketelaere's rise has been several years in the making. Last season he started to get regular appearances for Club Brugge – scoring three and assisted four in 32 league appearances – however it is this season in which he has started to make the headlines. In the League he has scored 14 goals and has assisted 8 and the rise reflect the raw potential that the 21-year-old possesses in his locker. Currently, he's not only ranked as Club Brugge's most valuable player, but the most valuable player in the entire league and according to reports Leicester City is tempted to sign him in the summer transfer window.

R. Nainggolan CAM – Royal Antwerp FC - 80 -> 92 Rated: The last one in my prediction is Nainggolan who always was a reliable player for an insane Team of the Season card when he was playing in Serie A for example. Nainggolan spent his entire club career in Italy before heading to his native Belgium to sign for Royal Antwerp last summer. His dynamic approach and goalscoring ability made him appear to be a perfect fit for the Premier League, however, he never accepted such an opportunity. For Antwerp he scored twice and assisted another three and he would be a perfect player to receive a Flashback card during Pro League TOTS.