Team of the Season FIFA22 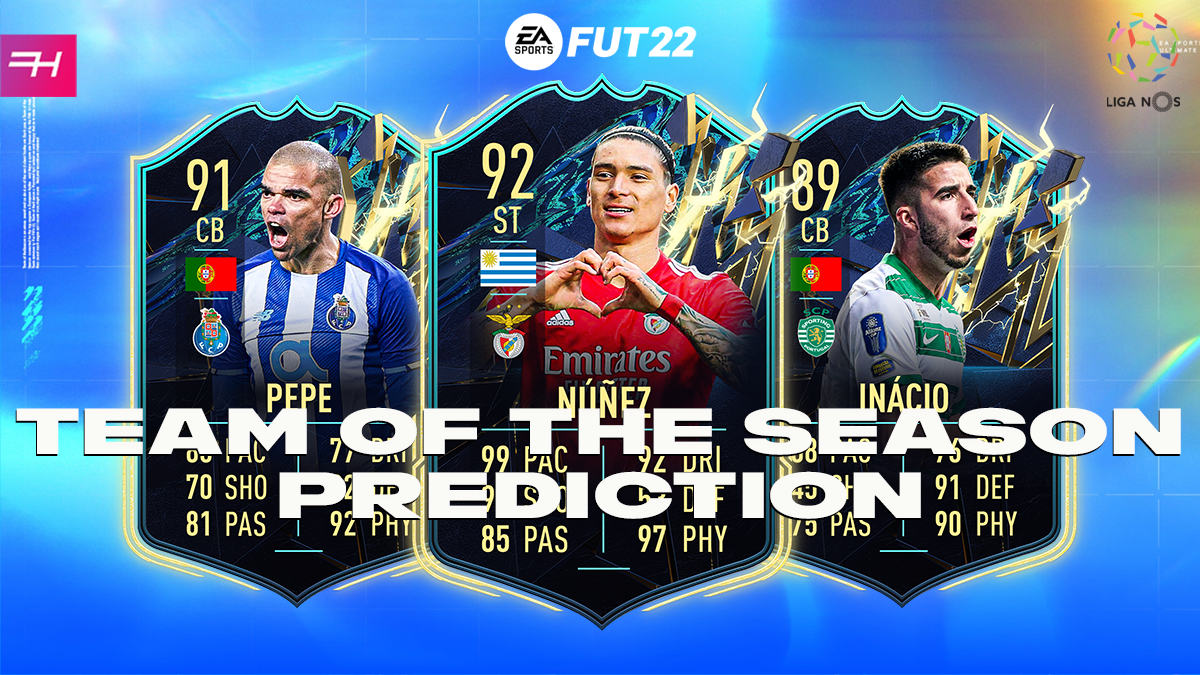 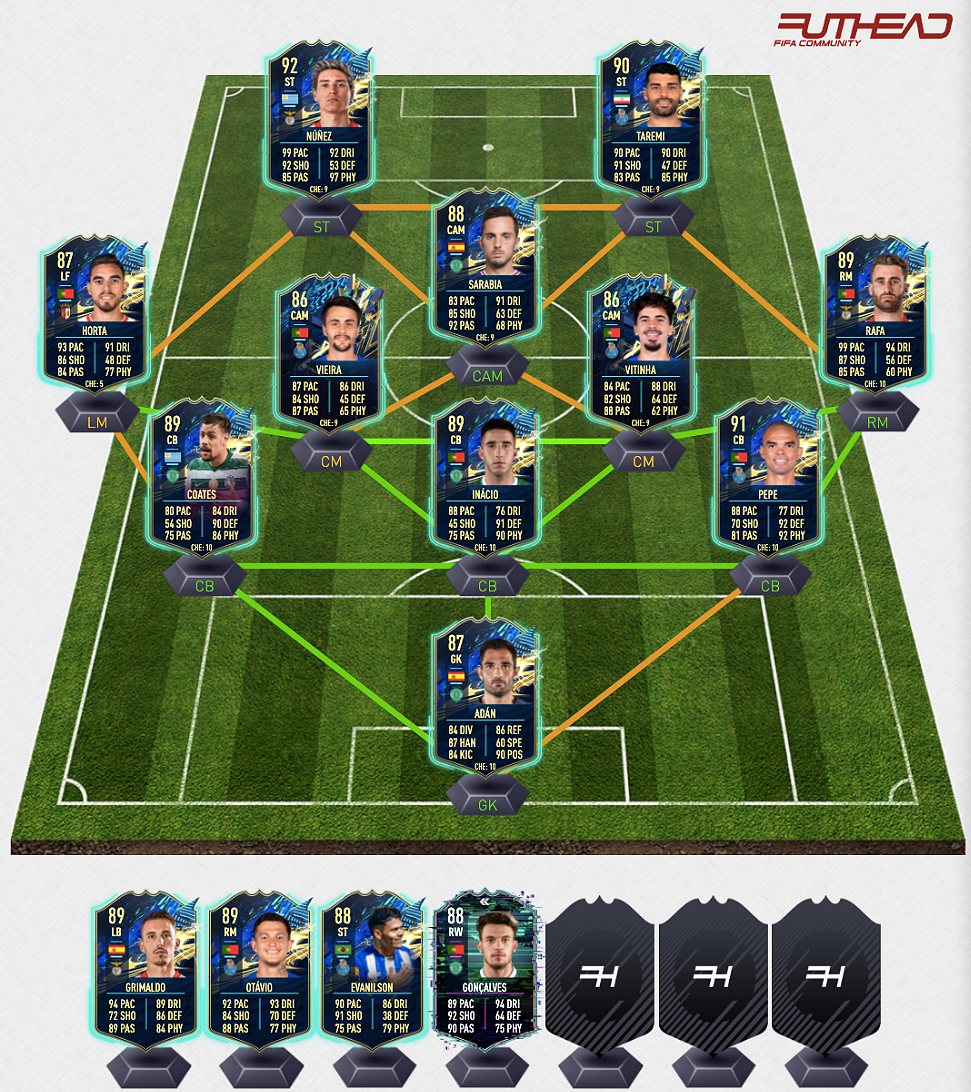 A. Adan GK – Sporting CP - 81 -> 87 Rated: Starting with the goalkeeper for the Liga NOS Team of the Season and there have been a couple of choices I could have included, my option in the end was Sporting CP's shot-stopper Antonio Adan who, despite not winning the league this season, managed to keep a total amount of 17 clean sheets in 32 games. You could argue it's because of the defense in front of him but it's still hard to ignore.

S. Coates CB – Sporting CP - 86 -> 89 Rated: Starting with the first Liga NOS defender in the name of Coates who is always a candidate for a Team of the Season item in Fifa. The same applies this Fifa even though Sporting lost the title challenge against Porto but Coates has been solid throughout the whole campaign and also was a big reason Sporting survived the Champions League group stage in a Group with Ajax and Borussia Dortmund.

G. Inacio CB – Sporting CP - 84 -> 89 Rated: Next up is another Sporting defender and one of the most promising young centre-back talents in the league, if not in Europa. A product of the prestigious Sporting academy, Inacio has been a vital cog in the club's backline since making his breakthrough last season. His defensive contributions were critical in helping the Lions break Benfica and Porto's hegemony over Portuguese football last term by winning the league title and he has maintained his form in the current season. Despite being only 20, the Sporting CP defender has shown tremendous quality, even in Europe, and it's no surprise that Manchester United entered the race to sign him.

Pepe CB – FC Porto - 89 -> 91 Rated: The last defender in my prediction this time comes from this seasons league winner FC Porto in the name of Pepe. The Portugal centre-back, who re-joined Porto back in 2019 after his spell at Besiktas, was a vital figure in Porto's incredible camapign this season. His side only lost one game the whole season and conceded the least amount of goals of every team in the league.

Fabio Viera CAM – FC Porto - 72 -> 86 Rated: Primarily an attacking midfielder, the 21-year-old Viera came through the ranks at porto before going on to make his debut for the senior side in 2020 and has become a key figure in the starting XI during the second half of the campaign this year. The Portuguese has been hugely impressive with seven goals and 13 assists from 33 appearances and with such performances, it appears only a matter of time before he makes his senior debut for his country.

Vitinha CM – FC porto - 67 -> 86 Rated: A central midfielder by trade, Vitinha spent last season on loan to Wolverhampton. However, the spell didn't go all too well for the player and upon his return to Dragao, the 22-year-old has become a lynchpin for the FC Porto midfield. It has been a breakout season for him, going from being rejected from Wolves to Porto star in the space of a year. He has made 29 league appearances this term, with his contributions proving to be critical in helping the Dragons keep their lead over Sporting and pick up the league title this season.

Sarabia CAM – Sporting CP - 83 -> 88 Rated: The loan transfer to Sporting Cp was the best thing that could have happened to Pablo Sarabia since there he found a coach who trusts him and a crowd that is fully devoted to him. All that has made himrecover to his best version, the one he showed at Sevilla years ago. The Spaniard has recorded 14 goals and 6 assists in the league up to date, numbers that have reawakened the interest of Paris in him and it looks like he'll get another chance in the French capital since Sporting won't be able to sign him.

R. Horta LW – SC Braga - 82 -> 87 Rated: One of the very few players in my Liga Portugal Team of the Season who's not from Porto, Sporting or Benfica is Braga's Ricardo Horta. The left winger, who plays for Sporting Braga since 2016, has spent the last six years carving out a major reputation for himself and his sensational form for his side this season put a string of suitors in red alert. The 27-year-old is also attracting interest from domestic giants Benfica and Porto after his 18 goals and 5 asissts this term and it will be interesting to see if he'll stay or make a move to one of the top 5 leagues in the summer.

Rafa RM – SL Benfica - 84 -> 89 Rated: It has been a disappointing season for Benfica who, for the second straight season, had to sit on the sidelines and watch the two-horse title race between their two eternal rivals. However, one player who has been a consistent shining light for Benfica was Rafa Silva. The 28-year-old playmaker is having one of his finest seasons where he leads the assists charts with 15, one more than Pedrinho. On top of that he also managed to score 8 goals and his performances made Wolverhampton thinking about a potential transfer in the summer.

D. Nunez ST – SL Benfica - 84 -> 92 Rated: The Uruguayan Darwin Nunez is expected to be one of the hottest prospects on the summer transfer market when it opens in a few weeks after his stellar season in the league and also in the Champions League. He has been one of the standout players in Portuguese football this season, leading the scoring charts with 26 goals and is keen to move to the Premier League this summer, putting several clubs on alert for a rumored price of €70m.

M. Taremi ST – FC Porto - 86 -> 90 Rated: The last player in my prediction is FC Porto's forward Mehdi Taremi. The Iranian, who signed for Porto in August 2020, has been a consistent goalscorer for his side joining the club. Currently sitting on 20 goals and 12 assists, his acrobatic goal against Chelsea in the Champions League quarter-final raised the eyebrows which saw him being nominated for the UEFA Puskas award, missing out on the award to Lamela. With the Iranian set to turn 30 years in July, it is unclear if other top European teams will be looking to sign him in the summer but Porto surely will demand top dollar with his contract running till 2024.

Grimaldo LB – SL Benfica - 84 -> 89 Rated: Alex Grimaldo has been one of the scarce positive notes of Benfica this season. He has come leaps and bounds since joining Benfica from Barcelona in 2016. A product of Barcelona's famous youth academy, La Masia, the Spaniard has been a pivotal figure for the Portuguese giants over the last half a dozen years. The 26-year-old has enjoyed a solid 2021/22 campaign, chipping in with six goals and nine assists in 47 appearances across all competitions. But his contract has but Benfica in a spot of bother, with his deal expiring on a little over a year and that has not gone unnoticed, with Barcelona reportedly keen on re-signing the Spanish left-back.

Otavio RM – FC Porto - 86 -> 89 Rated: Another FC Porto player who could be featured in the Liga Portugal Team of the Season is Otavio who has been hugely impressive this season. Otavio is regarded as an extremely versatile player, who is capable of playing anywhere across the front lines. A right midfielder by trade, Otavio has been an influential figure at Porto in recent years and operated mostly on the right-hand side this season, racking up an impressive 11 assists and 3 goals in the league and played a key role in helping FC Porto securing the league title this season.

Evanilson ST – FC Porto - 84 -> 88 Rated: Evanilson is another young and promising talent in Portugal. Joined FC Porto in September 2020, the 22-year-ld striker has had a linear rise, especially in the second half of the season when Porto lost Diaz who joined Liverpool in the winter transfer window. Having scored 14 goals and assisted another 4 this season, Evanilson deserves a Team of the Season item wether it's via SBC or objective.

P. Goncalves RW – Sporting CP - 81 -> 88 Rated: Formerly of Braga, Goncalves has been one of the rising stars in Portuguese football over the past couple of years. He rose into prominence last season, scoring 23 goals in 32 league matches and his contributions in front of the goal were critical helping Sporting CP secure the title for the first time in around two decades. The 23-year-old has not been able to reach the same heights this season. However, his tally of eight goals and eight assists are not disappointing at all for a right-winger and a Flashback card would make up for it if he wouldn't be in the main XI.