Published on by Simpleblue 14 Comments Updated on 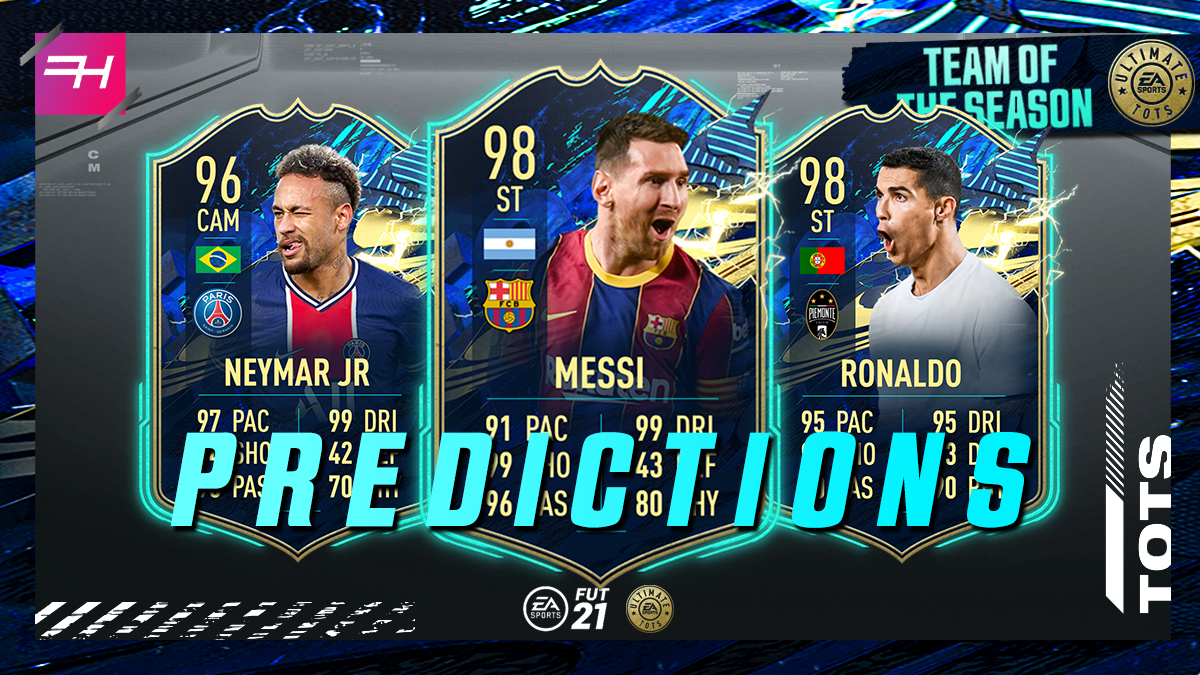 So before you start reading the article I just want to give you a quick explanation about my selections. I've compared the last two Ultimate TOTS squads to check how many players of each position and league was included so these are two of the criteria's I've based the prediction on. Second thing is that although the main leagues this year have been limited to just 15 players in packs, I think we will still see a bigger Ultimate TOTS squad and the reason why I think so simply is the guaranteed 11 TOTS packs for the FUT Champs Top 200 players. They could stick to 15 players and reduce the amount of expensive cards but at the same time it would mean that it really isn't 'Ultimate TOTS' anymore if you exclude players like Mbappé. Extending it to 20 players would allow them to include nearly every expensive and high rated player but at the same time they can also inlcude players like Benzema or Hummels and make the Top 200 packs more balanced. 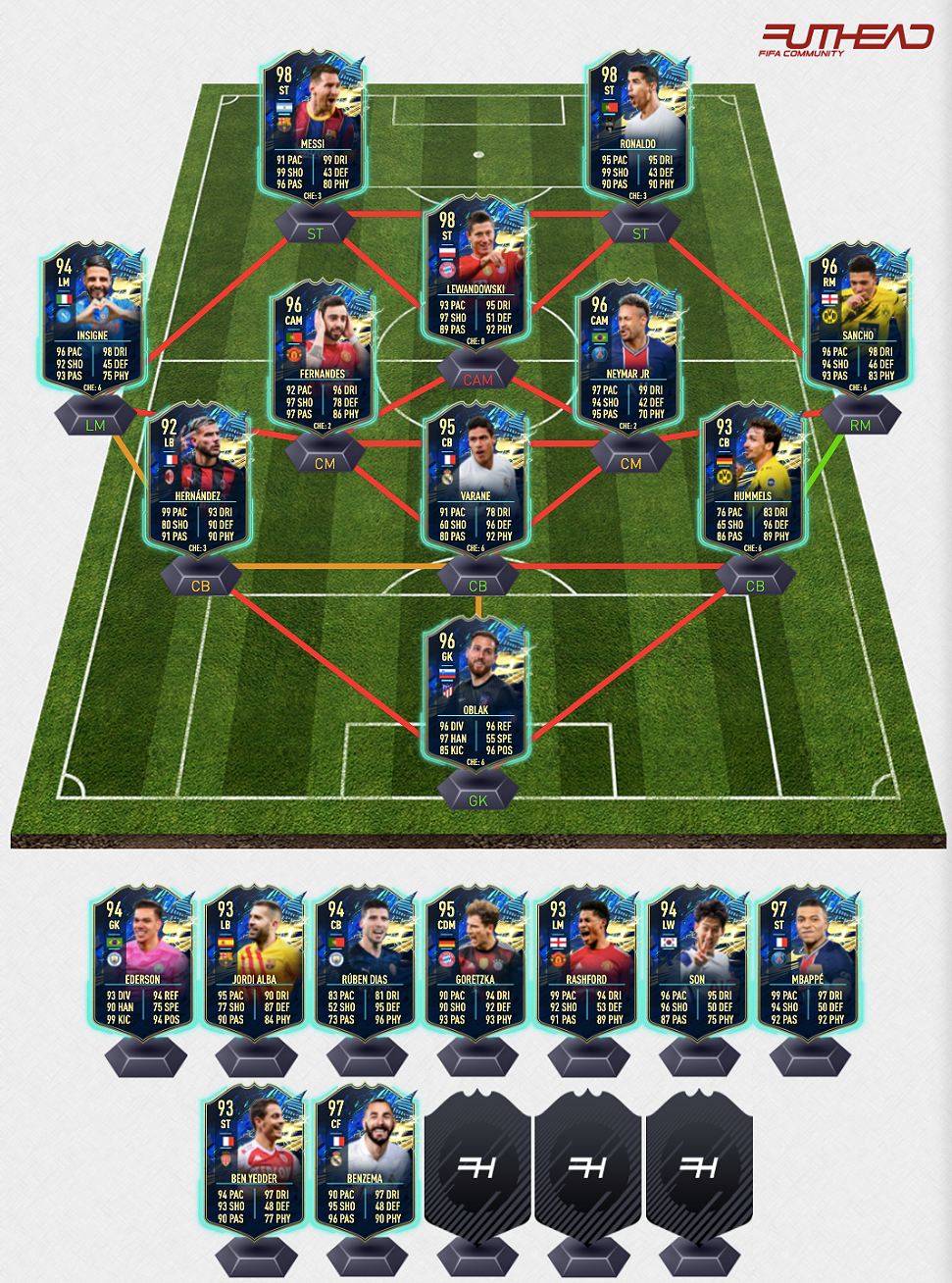 J. Oblak GK – Atletico Madrid - 94 -> 97 Rated: One of the two keepers I think will be in the Ultimate TOTS is Oblak, he has been in the last two FIFA's aswell.

T. Hernandez LB – AC Milan - 87 -> 94 Rated: The first defender I think is going to be in is Milan's Theo Hernandez, a top-tier card and one of the best left-backs in the game.

R. Varane CB – Real Madrid - 91 -> 96 Rated: Varane is the second defender who I think is in Ultimate TOTS. Last year's best defender was Van Dijk and Varane is similar this FIFA even though it's not the current meta to use CB's.

M. Hummels CB – Dortmund - 88 -> 93 Rated: My last defender is Dortmund's Hummels. He also was in last year and I'm sure he was one of them you've packed a lot in your upgrade packs.

Neymar CAM – Paris SG - 92 -> 96 Rated: The first midfielder in my Ulitmate TOTS prediction is Paris SG's Neymar. A very popular player in FIFA and also the most expensive one this year.

L. Insigne LM – Napoli - 89 -> 94 Rated: After I've compared the last two Ultimate TOTS's I have to include Insigne to make it more balanced when it comes to league selections. Also there a not a lot of attractive wide mifielders plus Insigne isn't too expensive. J. Sancho RM – Dortmund - 92 -> 96 Rated: Another back-to-back inclusion in this year's Ultimate TOTS could come in the name of Jadon Sancho. This might also be his last TOTS for Dortmund as it's likely he is going to leave in the summer.

R. Lewandowski ST – FC Bayern - 98 -> 98 Rated: The first attacker in here is, who would have thought, Lewandowski. The Polish International record breaker should get his back-to-back inclusion in this year's Ultimate TOTS.

L. Messi ST – FC Barcelona - 98 -> 98 Rated: When we are talking about Ultimate TOTS, there's no way not to include Lionel Messi. One of the three highest rated TOTS this Fifa and surely he isn't going to miss out.

C. Ronaldo ST – Piemonte Calcio - 98-> 98 Rated: Another nearly confirmed inclusion in Ultimate TOTS is Cristiano Ronaldo. As I said before, Ronaldo is also one of the three 98 rated TOTS this year and I can't see him not being included.

Ederson GK – Manchester City - 89 -> 94 Rated: The inclusion of a second goalkeepers all comes down to the question if we're going to see a squad of 20 players or not but if so, Ederson is my first option for the second goalkeeper.

J. Alba LB – FC Barcelona - 88 -> 93 Rated*: The last two Ultimate TOTS had a balanced amount of defenders compared to the other positions and one I think who might be inlcuded is Jordi Alba.

R. Dias CB – Manchester City - 88 -> 94 Rated: The last possible defender in Ultimate TOTS could be Ruben Dias. Joao Cancelo is also a possible player to be in but I think we will at least see one of them to be the Portuguese Walkout troll.

L. Goretzka CDM – FC Bayern - 89 -> 95 Rated: Leon Goretzka is the next player from the Bundesliga who could be included. For me it's a 50/50 inclusion as Kimmich is the other option for a midfielder to get in but I decided to go with Goretzka.

M. Rashford LM – Manchester United - 90 -> 93 Rated: Next one I think is going to be in is Rashford. He's one of the most popular cards in Fifa and one of the few wide midfielders who are useable or at least one of them people would use compared to others.

H. Min Son LW – Tottenham - 89 -> 94 Rated: Another Premier League player who could be in is Tottenham's Son. I'm not 100% confident that he is going to be in due to the fact we didn't know how many players we'll have in total but if we will see a squad of 20 players then he has a good chance.

K. Mbappé ST – Paris SG - 97 -> 97 Rated: It's no surprise we are talking about Mbappé when it comes to Ultimate TOTS. He's one of the top five TOTS cards and surely going to be in.

W. Ben Yedder ST – AS Monaco - 89 -> 93 Rated: The last Ligue 1 player who could be in is Monaco's Ben Yedder which also would be a back-to-back inclusion. For me personally it's an obvious one but we will see if EA will go the same route.

K. Benzema CF – Real Madrid - 95 -> 97 Rated: The last player in my predicted Ultimate TOTS selection is Madrid's Benzema. High rated but not extremely expensive to round it up and in my opinion perfect for an inclusion.